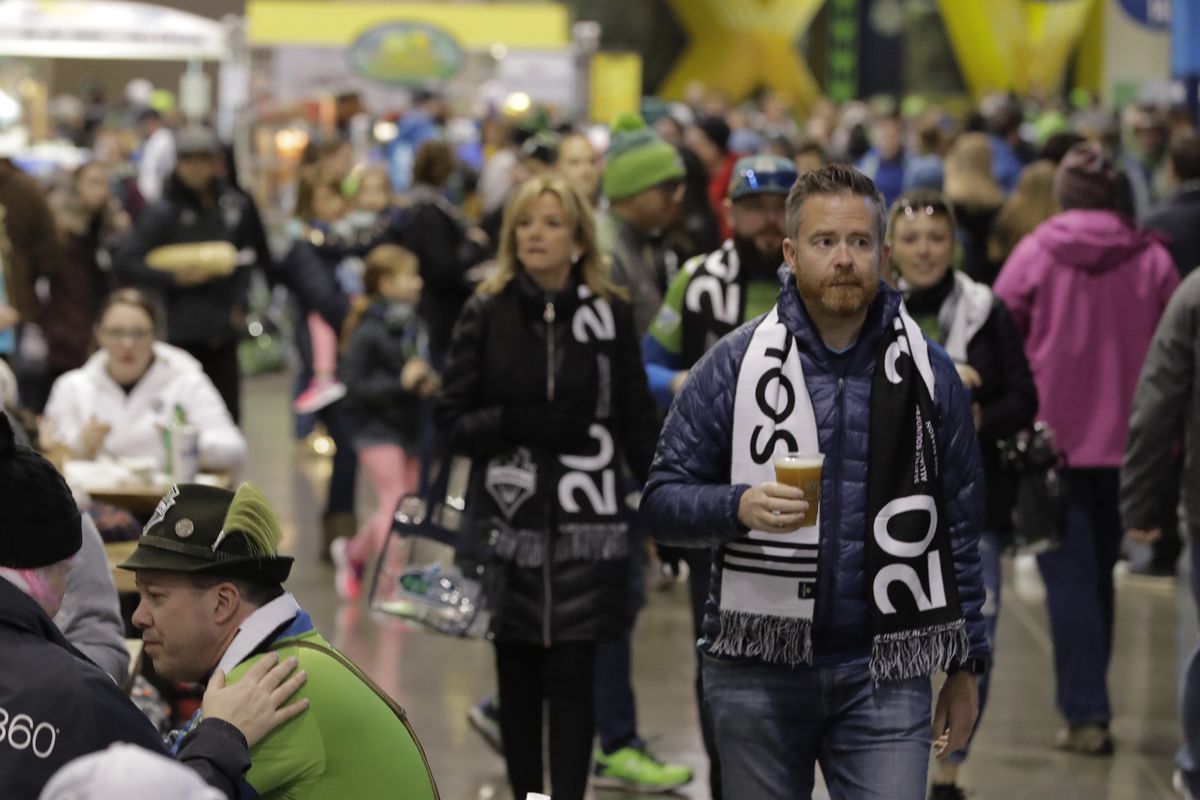 People crowd a concourse area of CenturyLink Field prior to an MLS soccer match between the Seattle Sounders and the Chicago Fire, Sunday, March 1, 2020, in Seattle. (AP Photo/Ted S. Warren)

People crowd a concourse area of CenturyLink Field prior to an MLS soccer match between the Seattle Sounders and the Chicago Fire, Sunday, March 1, 2020, in Seattle. (AP Photo/Ted S. Warren)

SEATTLE — Authorities closed Seattle’s schools and banned large gatherings Wednesday across the hard-hit metropolitan area and in San Francisco, undertaking the most sweeping efforts yet to contain the nation’s coronavirus outbreak.

In a state where at least 25 victims have died — 19 of them from the same suburban Seattle nursing home — Washington Gov. Jay Inslee prohibited activities involving more than 250 people. The ban, encompassing an area of 4 million residents, applies to houses of worship and baseball's Seattle Mariners, whose home games will be moved.

"This is not just your ordinary flu," Inslee said. "This demands a response consistent with the nature of the threat."

In San Francisco, Mayor London Breed banned all gatherings 1,000 or more people for the next two weeks in the city of 880,000, including Golden State Warriors basketball games. California's Santa Clara County, home to San Jose and Silicon Valley, did the same.

The Seattle public school system, which has about 53,000 students, also announced that it would close, starting Thursday.

The all-out drive to encourage "social distancing" — the new catchphrase amid the crisis — unfolded as infections in the U.S. topped 1,000 and the death toll climbed to at least 33. The outbreak has spread to as many as 40 states, with Arkansas and New Mexico reporting their first cases of the virus.

"Bottom line, it's going to get worse," Dr. Anthony Fauci, director of the National Institute of Allergy and Infectious Diseases, said on Capitol Hill.

As for how much worse, Fauci said that would depend on the ability of the U.S. to curtail the influx of travelers carrying the disease and state and community efforts to contain the outbreak. He said if mild cases of the virus are counted, the mortality rate is probably about 1 percent — "roughly 10 times more lethal than the seasonal flu."

The plunge came as the World Health Organization declared the virus a pandemic, or serious global outbreak, with officials noting that the number of cases outside China increased 13-fold over the past two weeks. Designating the crisis a pandemic is WHO’s way of putting countries on notice to take more aggressive action against the virus, which has infected nearly 125,000 people worldwide and killed almost 4,600.

In the U.S., the Seattle area has been hit hardest of all.

Dr. Jeff Duchin, public health officer with Seattle and King County, said the region is facing an unprecedented health emergency as the number of cases doubles every few days.

"We expect a large-scale outbreak in weeks, and this will be a very difficult time," he said. "It's similar to what you might think of as an infectious-disease equivalent of a major earthquake that's going to shake us for weeks and weeks."

Inslee said government has the authority to crack down on groups or individuals who ignore the directive, but added that he expects people will abide by the order. Asked about penalties for violations, he said: "The penalties are you might be killing your granddad if you don't do it."

Elsewhere around the country, Kentucky Gov. Andy Beshear urged churches across the state to cancel services.

"I don't believe that whether you go to church during this period of time is a test of faith," he said. "I believe God gives us wisdom to protect each other and we should do that."

Massachusetts is dealing with of cluster of at least 70 cases connected to a meeting held last month by biotech company Biogen at a hotel in Boston, while a cluster of over 100 infections in the New York City suburb of New Rochelle prompted the closing of schools and houses of worship, with Gov. Andrew Cuomo announcing plans to send in the National Guard to sanitize public places and deliver food to those who are quarantined.

Chicago canceled its St. Patrick's Day parade, joining Boston and Philadelphia. Instead of hosting 100,000 at its twice-yearly conference in Salt Lake City next month, the Church of Jesus Christ of Latter-day Saints said it will hold the gathering online and on TV, with leaders delivering speeches without any attendees. The National Association of Broadcasters canceled its annual trade show, scheduled for April in Las Vegas. It typically draws 100,000 people.

For most people, the virus causes only mild or moderate symptoms such as fever and cough. For some, especially the elderly and people with existing health problems, it can cause more severe illness, including pneumonia. Most people recover in a matter of weeks, as has happened with the majority of those infected in China, the virus' country of origin.

Tests by U.S. government scientists and other experts found that the virus can live in the air for several hours and on some surfaces for two to three days.

For those in the middle of a quarantine, it's an anxious time waiting for the threat to pass.

Judy Aqua, who is in her 60s, is quarantining herself at home in New Rochelle after possibly being exposed to someone with the virus.

Some airport workers are also dealing with the outbreak, with several Transportation Security Administration officers at the San Jose airport testing positive. All TSA employees who had contact with them over the past 14 days are being quarantined at home, the agency said.

In Oakland, California, restless passengers on a coronavirus-struck cruise ship awaited their turn to disembark. By Tuesday night, Princess Cruises said about 1,400 of the 3,500 people on board had gotten off, and efforts were underway to move them to quarantine in their home countries or at military bases in California, Texas and Georgia.