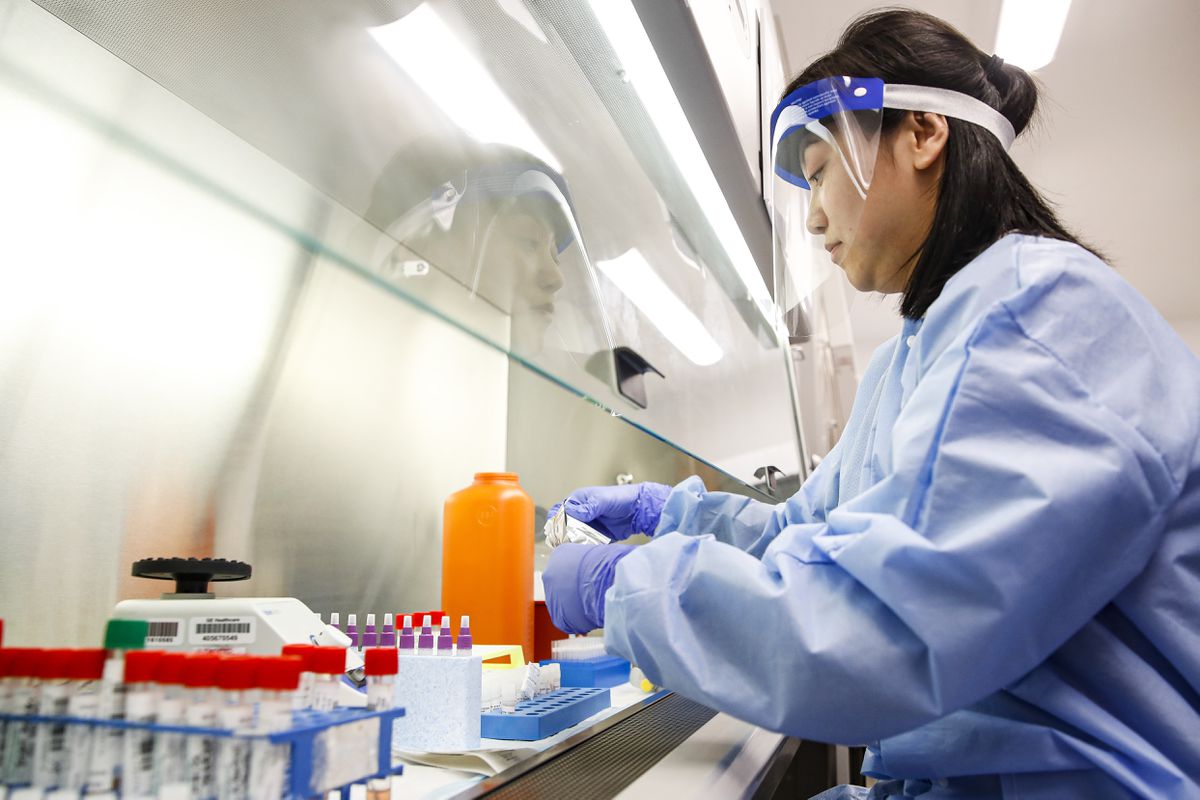 A laboratory technician prepares COVID-19 patient samples for semi-automatic testing at Northwell Health Labs, Wednesday, March 11, 2020, in Lake Success, N.Y. The US Food and Drug Administration has approved faster testing protocols as the viral outbreak continues to spread worldwide. For most people, the new coronavirus causes only mild or moderate symptoms. For some it can cause more severe illness. (AP Photo/John Minchillo)

A laboratory technician prepares COVID-19 patient samples for semi-automatic testing at Northwell Health Labs, Wednesday, March 11, 2020, in Lake Success, N.Y. The US Food and Drug Administration has approved faster testing protocols as the viral outbreak continues to spread worldwide. For most people, the new coronavirus causes only mild or moderate symptoms. For some it can cause more severe illness. (AP Photo/John Minchillo)

The World Health Organization on Wednesday declared the coronavirus a global pandemic as countries and municipalities took increasingly dramatic measures to slow the spread of the deadly contagion, including President Donald Trump’s announcement that he is sharply restricting travel to the United States from Europe for 30 days, beginning Friday at midnight.

In an Oval Office address Wednesday night, Trump said that his European travel restrictions will not include the United Kingdom and will include exceptions for Americans who have received “appropriate screenings.”

He and administration officials later tweeted that the restrictions only apply to people, not goods and trade, and will not include a bar on U.S. citizens or legal permanent residents. Trump spoke sternly about what he called a "foreign virus" that "started in China and is now spreading throughout the world."

"The virus will not have a chance against us," Trump said. "No nation is more prepared or more resilient than the United States."

Though Trump repeated his assertion that the risk to most Americans is “very, very low,” world leaders conceded Wednesday that the disease almost certainly will become a far worse problem amid a global scramble to keep people from traveling and gathering in public spaces.

[Dunleavy declares emergency over coronavirus, with still no cases confirmed in Alaska]

The WHO declaration is a reflection of the alarm that countries are not working quickly and aggressively enough to fight the virus and that the control measures now in place might have come too late. There are now more than 125,000 confirmed cases worldwide, with more than 4,600 deaths.

[Trump sharply restricts travel from Europe to U.S. for 30 days amid coronavirus concerns]

That message appeared directed squarely at the United States, which saw its first cases in January but where significant steps to help stem the spread were just taking effect within the past 48 hours. The NCAA announced Wednesday that its massively popular March Madness basketball tournament games will be played with nearly no spectators in arenas nationwide, a decision it said was made in the "best interest of public health."

The NBA announced Wednesday night that the current season has been suspended indefinitely after a member of the Utah Jazz tested positive for the virus, and actor Tom Hanks said on Instagram that he and wife Rita Wilson tested positive for coronavirus while in Australia.

[Coronavirus forecasts are grim, and ‘it’s going to get worse’]

Ohio Gov. Mike DeWine, a Republican, announced he was limiting large gatherings statewide, and schools around the country are closing for deep cleanings and so staff can plan for possible long-term shutdowns.

All 12 of Florida's state universities are closing their dormitories and presenting classes online. Health officials in Wisconsin are warning residents not to engage in nonessential travel. In Seattle, officials told people not to stand or sit shoulder to shoulder in the city's bars. A New York suburb continued to be under close scrutiny amid a government-imposed containment zone aimed at controlling a cluster of cases there.

U.S. officials said the worst is yet to come. There are now more than 1,000 confirmed cases of coronavirus in 39 states. More than 30 people, most of them elderly and with underlying respiratory conditions, have died.

"We will see more cases," Anthony Fauci, director of the National Institute of Allergy and Infectious Diseases, told lawmakers at a congressional hearing Wednesday. He said the virus has proven to be 10 times more lethal than the flu and can no longer be contained nationwide because it is widely spreading in some communities. "And things will get worse than they are right now."

[As big events are canceled and cases continue to spread, Americans come to grips with impacts of coronavirus]

Aside from restricting travel from Europe, Trump’s announcement Wednesday night was largely focused on the U.S. economy, which continued to slide amid global economic fears related to the virus. He prodded Congress to provide payroll tax relief and to direct the Small Business Administration to provide low-interest loans to affected small businesses. Trump also instructed the Treasury Department to defer tax payments without interest or penalties.

European fears also heightened as covid-19, the disease caused by the coronavirus, appeared to be picking up pace there, moving northward. More than 600 people have died in Italy, where the government announced it is closing all shops except grocery stores and pharmacies. German Chancellor Angela Merkel warned that as much as 70% of her country's population could be infected if no medications or vaccines to treat or prevent the disease emerge soon.

Merkel urged Germans to help slow its spread: "The virus has arrived."

India has effectively closed its border by suspending existing visas, with some exceptions, and Lebanon has halted travel to four affected countries. Israeli Prime Minister Benjamin Netanyahu announced a $2.8 billion relief package to stabilize the economy after requiring everyone arriving in the country to self-quarantine for 14 days.

The Trump administration is considering moving all of Europe to a Level 3 travel advisory, discouraging all nonessential travel there. The federal government was developing contingency plans to have employees telework, and it barred State Department and USAID employees from all but mission-critical travel. State and local authorities across the United States stepped up social distancing policies to discourage large crowds, where the virus could spread widely and wildly.

The crisis continued to cause economic panic, with the Dow Jones industrial average reaching bear-market territory on a nearly 1,500-point skid amid fears of recession. It also continued to affect the U.S. presidential race. Democratic nominee hopeful Joe Biden announced he will hold "virtual events" in Illinois and Florida at the urging of state health officials.

Washington state has the highest number of coronavirus cases and deaths in the United States, including a cluster of coronavirus fatalities linked to a nursing home that accounts for about two-thirds of all the deaths nationwide. Washington Gov. Jay Inslee, a Democrat, is prohibiting gatherings of more than 250 people in three hard-hit counties until the end of March. Jeffrey Duchin, health officer for Seattle and King County, went a step further, barring all social events - even those with less than 250 people - unless organizers can take steps to minimize risks to attendees.

Inslee recommended that businesses allow for employees to telecommute or, if not possible, implement social distancing to the extent possible. He expects the outbreak of the virus to last for weeks or months.

"We expect a large-scale outbreak in weeks, and this will be a very difficult time," Inslee said. "It's similar to what you might think of an infectious-disease equivalent of an earthquake that's going to shake us."

In Ohio, DeWine said on Twitter that he is limiting public gatherings because the United States has the "potential to become like Italy," which is in a nationwide lockdown because of the virus. "We are taking the actions we are taking now to try to avoid that."

New York Gov. Andrew Cuomo said all workers in the state will be given two weeks of paid leave if they are quarantined or isolated because of the virus. New York has the second-highest number of confirmed coronavirus cases in the country.

"Look, you don't want to shut down society, right, because that's massively disruptive to the economy, to life, etcetera," Cuomo said. "But your main concern here is the public health crisis."

Cuomo on Tuesday ordered the closure of schools and other gathering places within a one-mile radius in New Rochelle, a New York City suburb where more than 100 people have tested positive for the virus. The goal, he said, is to ensure large groups of people are not congregating. The area is not locked down, and people are free to come and go.

In New Rochelle's commercial center, outside the containment zone, residents said it appeared fewer people were out Wednesday than on a typical weekday.

Those people who were outside tended to walk briskly. One elderly woman had pieces of tissue smashed into her face, a haphazard attempt at making the kind of face mask that public health officials caution is unwarranted.

For local businesses, the ongoing crisis is creating a feast-or-famine economic situation, depending on what goods or services they offer.

At Mayflower Cleaners, a local laundry and dry-cleaning service, Byunghun Han said his business has fallen by more than 50% this week. Han typically receives 120 pieces of laundry a day. In recent days, he said, he has been lucky to collect "30 or 40."

Han makes sure he uses a spritz of hand sanitizer after he touches each piece of unwashed clothing to try to protect himself from possible exposure. But he is starting to wonder what his life will be like if the virus continues to spread here in this densely populated corner of Westchester County.

"My brother and sister live in South Korea, where there is also the virus, but they live in a very small town and have no problems," he said. "Small towns seem safer."

A few doors away, the owner of New Rochelle Wines said his business is booming. Sanju Kanam offers more than 1,200 brands of liquor and wines, and sales are up about 30% this week.

"It's going up because people are getting panicked," Kanam, 39, said. "They don't know if something is going to go wrong and are now worrying they will be stuck in their homes without liquor."

The uptick in sales comes with potential hazards: Kanam is engaging with more customers. He now stands several feet behind the counter during transactions, and he no longer touches credit cards.

"I'm just trying to keep myself clean and not touch the people and not the touch the ID cards," he said.

But Kanum's biggest worry comes when he closes his store at 9 p.m. He has twin 5-year-old boys at home.

"When I reach home, I really know the risks," Kanum said. "I now go into the garage and take a shower before I even go into the house to touch the kids. I'm handling cash all day, so I can't go just from the car to the kids because I think the cash may be an issue, because who knows who touches this cash."

Oscar Salomon, 18, and his mother, Marin, were standing outside his apartment talking about how they planned to stay healthy.

Marin works as a house cleaner - her business is also way up this week - and Oscar was handing her a bin of cleaning wipes that he found at a local supermarket.

"She is doing even more jobs now that the virus is outbreaking," he said. "There are a lot of people wanting even more deep cleaning."

But Oscar said he believes everything will be okay - if his neighbors just stay calm.

"I know a lot more people still die from the flu," he said. "This is major to people who overthink it, but other than that, it's not major to me."

Craig reported from New Rochelle, N.Y. The Washington Post’s Hannah Knowles and Lateshia Beachum in Washington; Chico Harlan in Rome; and Loveday Morris and Luisa Beck in Berlin contributed to this report.