Trump sharply restricts travel from Europe to U.S. for 30 days amid coronavirus concerns 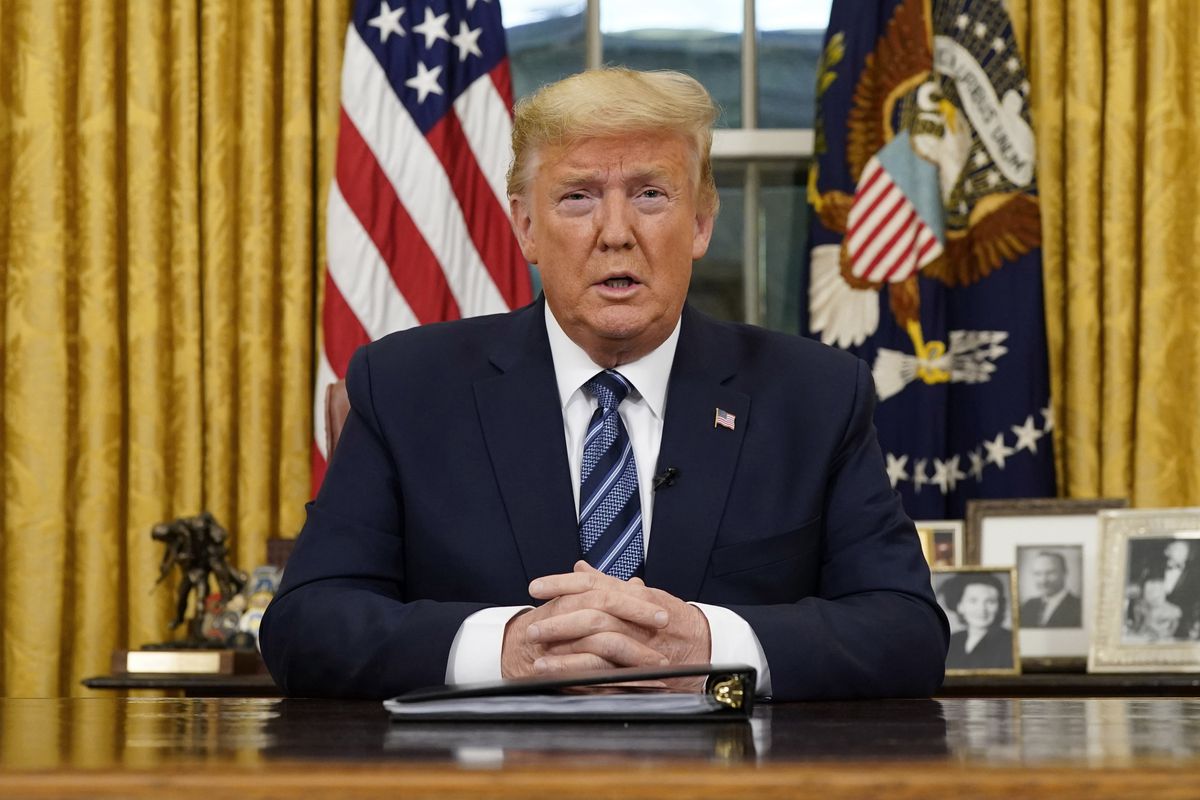 President Donald Trump speaks in an address to the nation from the Oval Office at the White House about the coronavirus Wednesday, March, 11, 2020, in Washington. (Doug Mills/The New York Times via AP, Pool)

President Donald Trump speaks in an address to the nation from the Oval Office at the White House about the coronavirus Wednesday, March, 11, 2020, in Washington. (Doug Mills/The New York Times via AP, Pool)

WASHINGTON — Taking dramatic action, President Donald Trump announced Wednesday he is sharply restricting passenger travel from 26 European nations to the U.S. and moving to ease the economic cost of a viral pandemic that is roiling global financial markets and disrupting the daily lives of Americans.

Trump, in a rare Oval Office address to the nation, said the month-long restriction on travel would begin late Friday, at midnight. After days of playing down the coronavirus threat, he blamed Europe for not acting quickly enough to address the “foreign virus” and claimed that U.S. clusters were “seeded” by European travelers.

“We made a lifesaving move with early action on China," Trump said. "Now we must take the same action with Europe.”

Trump said the restrictions won't apply to the United Kingdom, and there would be exemptions for “Americans who have undergone appropriate screenings." He said the U.S. would monitor the situation to determine if travel could be reopened earlier.

Trump spoke after days of confusion in Washington and in the face of mounting calls on the president to demonstrate greater leadership. At times, though, his remarks contributed to the uncertainty.

While Trump said all European travel would be cut off, Homeland Security officials later clarified that the new travel restrictions would apply only to most foreign nationals who have been in the "Schengen Area" at any point for 14 days prior to their scheduled arrival to the United States. The area includes France, Italy, German, Greece, Austria, Belgium and others, and the White House said the zone has the highest number of confirmed COVID-19 cases outside of mainland China.

The restrictions don't apply to legal permanent residents, immediate family of U.S. citizens or others "identified in the proclamation" signed by Trump.

And Trump misspoke when he said the prohibitions would “not only apply to the tremendous amount of trade and cargo, but various other things.” The official proclamation released after Trump spoke made clear it applies to people, not goods and cargo.

The Oval Office address was an abrupt shift in tone from a president who has repeatedly sought to downplay the virus. Many Americans shared a similar mindset in recent weeks, but the grueling events of Wednesday changed the mood: Communities canceled public events nationwide, universities moved to cancel in-person classes, and families grappled with the impact of disruptions to public schools. The number of confirmed cases of the infection topped 1,000 in the U.S. and the World Health Organization declared the global crisis is now a pandemic.

Even as Trump spoke from behind the Resolute Desk, the pandemic’s ferocious rewriting of American daily life continued. The National Basketball Association suspended its season, and Oscar-winning actor Tom Hanks announced that he and his wife, Rita Wilson, had tested positive for COVID-19. The first confirmed case on Capitol Hill was reported in a legislative staffer.

[Gov. Dunleavy declares emergency over coronavirus, with still no cases confirmed in Alaska]

[As big events are canceled and cases continue to spread, Americans come to grips with impacts of coronavirus]

After Trump spoke, the White House cancelled a planned trip by the president to Nevada and Colorado this week, “out of an abundance of caution." Trump's re-election campaign also postponed a planned March 19 event in Milwaukee that was set to feature the president.

After a week of mixed messages and false starts, and as government officials warned in increasingly urgent terms that the outbreak in the U.S. will only get worse, Washington suddenly seemed poised to act.

Congress unveiled a multibillion-dollar aid package Wednesday that was expected to be voted on by the House as soon as Thursday.

"I can say we will see more cases, and things will get worse than they are right now," Dr. Anthony Fauci, director of the National Institute of Allergy and Infectious Disease, said in testimony before the House Oversight and Reform Committee. He said the virus is "10 times more lethal than the seasonal flu.”

S&P 500 futures went from a loss of about 0.4% before Trump spoke to a decline of 1.5% afterwards. The decline in the futures market followed a steep 4.9% drop in regular trading Wednesday. Wall Street investors are increasingly concerned that the Trump administration and other governments won’t be able to do enough to prevent the virus outbreak from causing significant damage to the global economy.

After Trump’s address, Defense Secretary Mark Esper announced a series of moves, including restrictions for 60 days on travel by servicemembers, Defense Department civilians and their families to, from and through the four counties currently designated by the Centers for Disease Control as the highest risk COVID-19 counties — China, Iran, South Korea and Italy.

In his remarks, Trump focused more on the threat of travel continuing to bring in illness when, in fact, in parts of the country there already is “community spread” — meaning people who don’t have a known travel exposure are becoming infected.

In an omission that Democratic leaders called “alarming," Trump left unaddressed the testing backlog that is hampering efforts to learn just how many Americans already are infected. And while he warned the elderly to avoid risky crowds, advised nursing homes to suspend visitors and told sick people to stay home from work, he didn’t address one of the biggest concerns — whether hospitals are equipped to handle the sick or will be overwhelmed.

Georgetown University public health expert Lawrence Gostin tweeted in reaction to Trump's speech, "Most of Europe is as safe as US," and COVID-19 “is already here; germs don't respect borders.”

Trump said he was also directing agencies to provide unspecified financial relief for “for workers who are ill, quarantined or caring for others due to coronavirus," and asked Congress to take action to extend it. White House aides declined to provide details on Trump’s announcement.

Trump said the U.S. will will defer tax payments for some individual and business filers for three months to lessen the impacts of the virus outbreak. He said the Small Business Administration will also make low-interest loans available to businesses to help them weather the storm.

"This is not a financial crisis," he said. "This just a temporary moment of time that we will overcome together as a nation and as a world."

Trump also reiterated his call on Congress to pass a cut to the federal payroll tax in order to stimulate the economy, though that proposal was dismissed by many lawmakers on both sides of the aisle. He remained silent on his previous calls to provide assistance to industries hard-hit by the pandemic like airlines and cruise ships.

On Capitol Hill, House Speaker Nancy Pelosi unveiled an economic assistance plan that was gaining bipartisan backing. Central to the package is free coronavirus testing nationwide and emergency funding to reimburse lost paychecks for those self-quarantining, missing work or losing jobs amid the outbreak.

The draft legislation would create a new federal emergency sick leave benefit for people with the virus or caring for a coronavirus victim. It would provide two-thirds of an employee's monthly income for up to three months.

The administration had floated several other strategies, including the rare idea of declaring a national disaster that could potentially unlock funding streams, according to a person unauthorized to discuss the planning and granted anonymity. But Trump ultimately opted against taking that step Wednesday.

Trump, 73, is considered at higher risk because of his age and has repeatedly flouted the advice of public health experts, who have advised the public to stop hand-shaking and practice social distancing. But that didn't stop him from calling on fellow citizens to help combat the virus' spread. "For all Americans, it is essential that everyone take extra precautions and practice good hygiene. Each of us has a role to play in defeating this virus," he said.

Congress' attending physician told staff there could be 70 million to 100 million coronavirus cases in the U.S. That's on par with other estimates. A Harvard official has estimated that 20% to 60% of adults will get the virus, noting it's “a pretty wide range.”

In Washington, tourists still arrived at the U.S. Capitol, but an official unauthorized to discuss the situation and speaking on condition of anonymity confirmed that tours would soon be shut down.