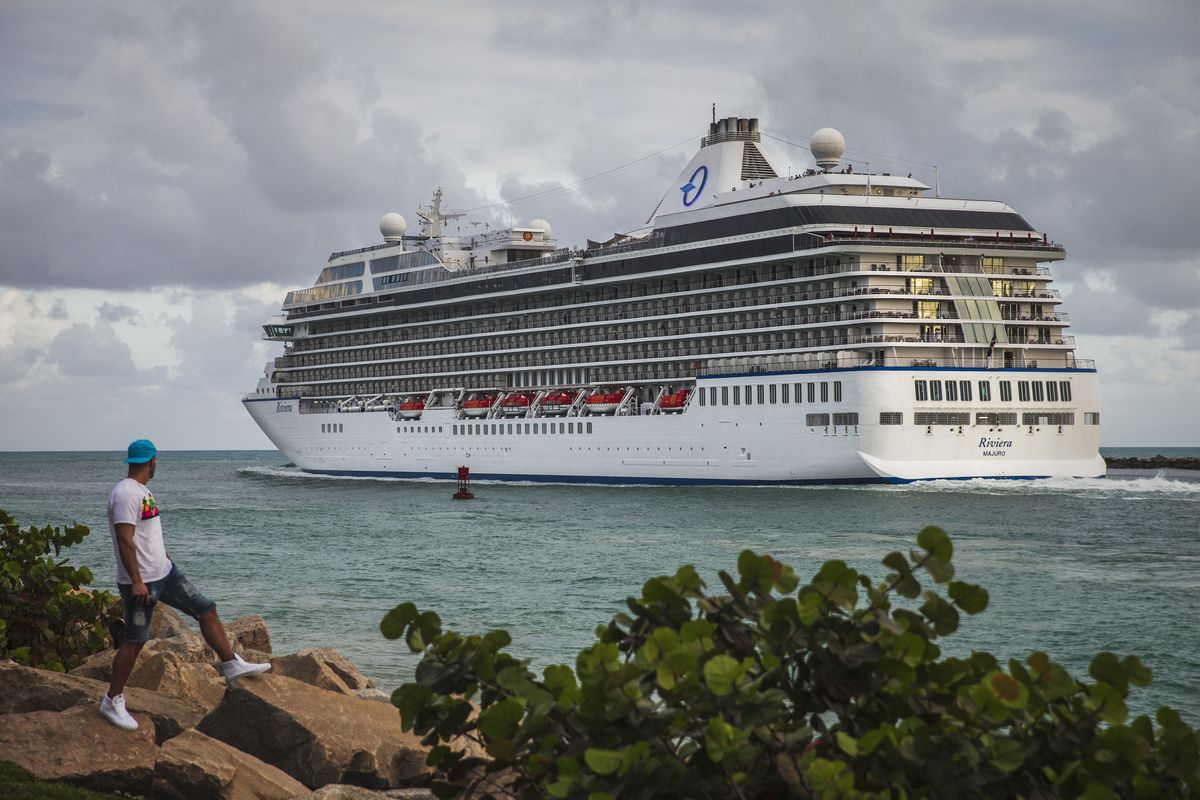 People watch as a cruise ship departs to the Atlantic Ocean from South Pointe Park in Miami Beach on Wednesday. (Photo for The Washington Post by Scott McIntyre)

People watch as a cruise ship departs to the Atlantic Ocean from South Pointe Park in Miami Beach on Wednesday. (Photo for The Washington Post by Scott McIntyre)

All major ocean and river cruise lines around the world have announced they are suspending their operations - either globally or just in the United States - temporarily in response to the coronavirus outbreak as ports turn ships away, attractions close and travelers call off their trips.

One key impetus: pressure from the White House. Late Friday, President Donald Trump said in a tweet that industry powerhouses Carnival, Royal Caribbean, Norwegian and MSC Cruises had agreed to his request that they stop sailing from the U.S. for 30 days. The suspension goes into effect at midnight Saturday.

The Cruise Lines International Association said the temporary and voluntary pause applies to all ocean cruise line operations from and to U.S. ports of call.

Some operators, including Royal Caribbean Cruises, limited their announced suspension to the 30-day window that Trump had requested. Carnival Cruise Line and Holland America Line did not immediately respond to questions about their plans.

Royal Caribbean, the world's second-largest cruise operator, said the pause would affect 114 voyages and 26 ships. The company owns Royal Caribbean International, which operates the largest ships in the world, as well as Celebrity Cruises, Azamara Club Cruises and Silversea Cruises.

"We are reaching out to our guests to help them work through this disruption to their vacations, and we are truly sorry for their inconvenience," Royal Caribbean Cruises said in a statement.

Geneva-based MSC Cruises said it would stop new voyages leaving the United States until April 30. The company has also stopped operating in "all areas considered as high risk for the virus," according to a statement, including in the Mediterranean, the Gulf and Asia. Ships sailing in South America and South Africa will not head out again once their current itineraries end.

Several other cruise lines called off all their sailings around the world.

One of the first to announce a pause was Princess Cruises, which has been hit hard by the outbreak: Passengers and crew on two different ships, Diamond Princess and Grand Princess, have been sickened and subject to quarantine since February.

Princess said Thursday morning that it is voluntarily canceling sailings on its 18 ships around the world through May 10. The cruise line sails with about 50,000 passengers a day, according to a statement.

The "voluntary and temporary pause" went into effect for all departures starting Thursday; voyages that are underway and scheduled to end within five days will keep sailing their scheduled itineraries. Those that are currently sailing with return dates past Tuesday will end "at the most convenient location for guests, factoring in operational requirements," the line said.

In a statement, the company said it was making the decision out of an abundance of caution and called the move "a proactive response to the unpredictable circumstances evolving from the global spread of covid-19."

The cruise line's president, Jan Swartz, said in a statement: "By taking this bold action of voluntarily pausing the operations of our ships, it is our intention to reassure our loyal guests, team members and global stakeholders of our commitment to the health, safety and well-being of all who sail with us, as well as those who do business with us, and the countries and communities we visit around the world."

Additionally, Viking Cruises, which operates a global fleet of nearly 80 river boats and ocean cruise ships, has suspended all embarkations through April 30 in response to the pandemic, said founder and chairman Torstein Hagen late Wednesday.

In a message to future passengers, Hagen said operating a travel company during the outbreak poses "significant risk" of quarantines and screenings of customers and workers, such as what has occurred with the Diamond Princess and Grand Princess cruise ships, which became emblematic of the pandemic worldwide.

But potential exposure also prompted the suspension, Hagen said, after a river cruise passenger in Southeast Asia may have come in contact with the virus on an international flight.

"While this guest is not exhibiting symptoms, she has been placed in quarantine. Separately, the remaining 28 guests will also be quarantined," he wrote.

U.K.-based Fred Olsen Cruise Lines said Friday it is pausing ocean cruises until May 23. Five people on one of its ships, Braemar, tested positive for the virus Tuesday during a Caribbean sailing, and the company was scrambling to find a port where it could let passengers off.

Disney Cruise Line, which operates four ships, is suspending all departures starting Saturday, lasting until the end of the month. The Walt Disney Company, which is also closing its theme parks in Florida, California and Paris through the end of March, made the announcement late Thursday.

Virgin Voyages postponed the maiden voyage of its first new ship for several months, to early August. And other operators of ocean cruises including Windstar Cruises and Carnival Corp.-owned European lines AIDA Cruises and Costa Cruises said they were suspending trips - Windstar until April 30 and the other two until early April.

The cruise operators' decisions come after a bruising several days for the industry during which the U.S. State Department and Centers for Disease Control and Prevention recommended that travelers, especially those who already have health issues, avoid cruising.

After meeting with Vice President Mike Pence on Tuesday to hear the administration's concerns, industry leaders turned in a plan that would prohibit some of the people most vulnerable to serious illness from getting on ships. According to an individual who is familiar with the plan, no one over 70 would be allowed on a cruise without a doctor's note saying they were healthy enough to travel.

In a statement confirming the suspension late Friday, the cruise industry association highlighted the unprecedented actions the cruise lines were taking.

"We do not take this decision lightly, and we want the traveling public to know in no uncertain terms the commitment of this industry to putting people first," said Adam Goldstein, global chairman of the group. "During this time, we will continue to work with the CDC and others to prepare for resumption of sailings when it is appropriate. We know the travel industry is a huge economic engine for the United States and when our ships once again sail, our industry will be a significant contributor to fueling the economic recovery."

The Washington Post’s Alex Horton and Meryl Kornfield contributed to this report.