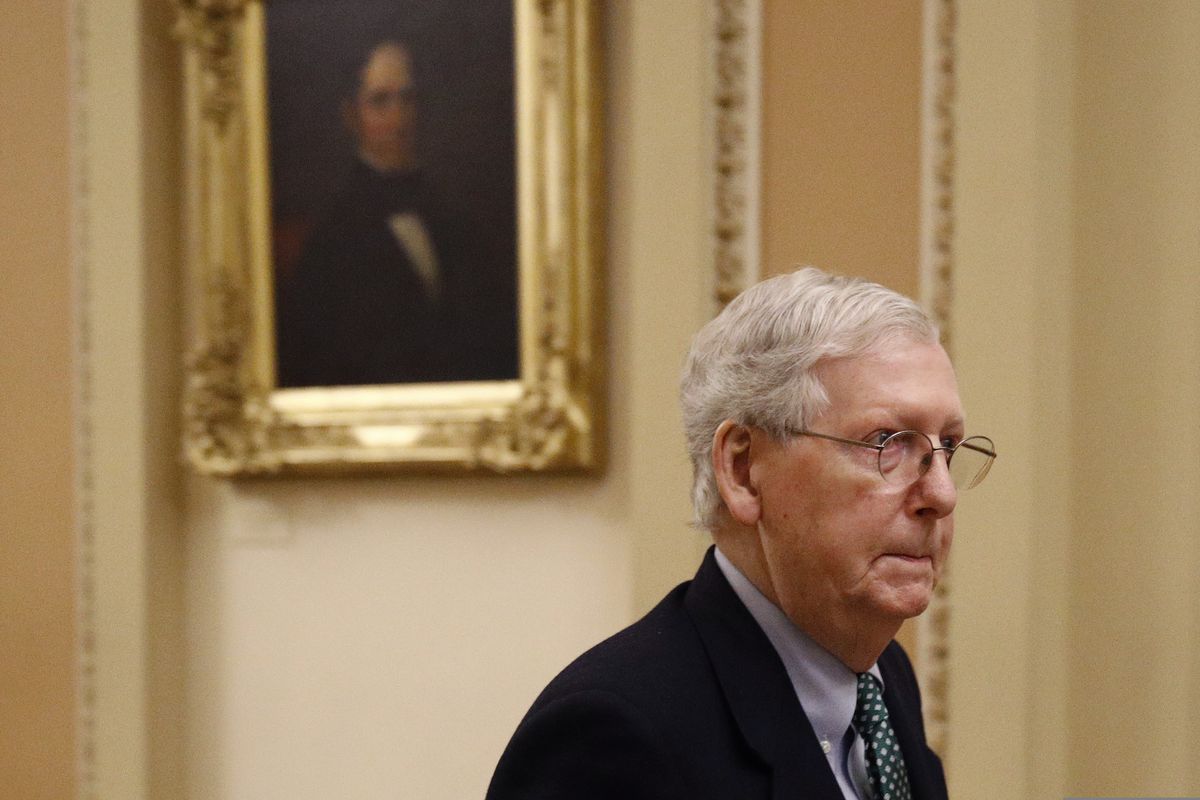 Senate Majority Leader Mitch McConnell of Ky. departs the Senate Chamber on Capitol Hill in Washington, Monday, March 16, 2020. With an urgency unseen since the Great Recession, Congress is rushing to develop a sweeping economic lifeline for American households and businesses suddenly capsized by the coronavirus outbreak. (AP Photo/Patrick Semansky)

Senate Majority Leader Mitch McConnell of Ky. departs the Senate Chamber on Capitol Hill in Washington, Monday, March 16, 2020. With an urgency unseen since the Great Recession, Congress is rushing to develop a sweeping economic lifeline for American households and businesses suddenly capsized by the coronavirus outbreak. (AP Photo/Patrick Semansky)

WASHINGTON — Senate Majority Leader Mitch McConnell proposed direct payments of $1,200 per person and $2,400 for couples as part of an initial Republican response Thursday to the coronavirus outbreak.

The GOP leader unveiled his plan as Congress raced to craft a $1 trillion rescue package to shore up households, health care and the U.S. economy amid the pandemic crisis and nationwide shutdown that’s hurtling the country toward a likely recession.

“We need to take bold and swift action as soon as possible,” McConnell, announcing his plan on the Senate floor.

It's an opening salvo in fast-track talks with Democrats as President Donald Trump urges Congress to “go big” to respond as Americans reel from the crisis.

Under the GOP leader's plan, the aid would be phased out at income thresholds of $75,000 for individuals and $150,000 per couple. Additionally, there would be $500 payments for each child.

McConnell's proposal aligns with the Trump administration's push to swiftly send a first round of checks to American households for immediate needs.

Additionally, the McConnell plan would provide $300 billion in loans to small businesses, including loans that would eventually be forgiven for employers who use them to meet payroll expenses.

Keeping paychecks flowing for idled workers as jobless claims skyrocket is a top priority for both Republican and Democratic plans emerging from Congress. But how best to send direct payments to Americans — as one-time stipends, ongoing payroll support or unemployment checks — is a crucial debate.

Democrats have their own proposals for ushering aid to Americans, and even McConnell's GOP senators panned Treasury Secretary Steven Mnuchin's idea of direct checks of $3,000 for a family of four — preferring instead to use the federal dollars to keep workers who are asked to stay home on the business payrolls.

“What I want is income, not one check,” said Sen. Lindsey Graham, R-S.C., summing up the views of some exiting a long, private meeting of GOP senators on Capitol Hill.

Trump administration officials, including Mnuchin and economic adviser Larry Kudlow, are expected to return to Capitol Hill on Friday to launch bipartisan negotiations with Senate Democrats.

House Speaker Nancy Pelosi, on a conference call with more than 220 House Democrats, urged them to “think big,” according to people on the call granted anonymity to discuss it.

Pelosi reminded them after her recent talk with Federal Reserve Chairman Jerome Powell that interest rates are low. The outlay should be considered an investment, Pelosi told them.

Democrats compiling their own priorities in the House and Senate suggest other ways to keep paychecks flowing in what Senate Democratic Leader Chuck Schumer called “employment insurance” — which he characterized as “unemployment insurance on steroids.”

Schumer said utilizing the existing unemployment insurance system run by the states would be a “quick and easy” way to distribute money to the newly jobless.

The swift-moving effort in an all-but-shuttered Capitol came as the first two lawmakers tested positive for the COVID-19 virus, others are self-isolating and the usually tradition-bound Congress faced calls to ease rules and allow remote voting.

To shore up industry, McConnell's plan would provide $208 billion in loans and loan guarantees to distressed sectors of the economy, including $50 billion for commercial airlines and $8 billion for air cargo carriers, and $150 billion for other eligible businesses, but those loans would have to be paid back.

Unlike the airline bailout after the 9/11 attacks, there would not be direct cash grants to airlines, according to the bill.

The measure would also allow people to make penalty-free withdrawals of up to $100,000 from their tax-deferred 401(k) retirement funds. It would also loosen tax rules on charitable giving.

The McConnell proposal would allow businesses to defer payment of the 6.2% employer payroll tax. Businesses would also receive more generous rules for business deductions of losses and interest costs.

At the same time, caring for the expected surge of sick Americans is a priority.

The McConnell proposal contains a raft of health care provisions — including permanent liability protection for the manufacturers of respirators and other desperately needed medical gear — but Democrats want more direct support to healthcare providers.

Democrats want to ramp up production of medical supplies and rapidly erect temporary field hospitals under new authorities Trump has invoked in the Defense Production Act.

“America needs a Marshall Plan for our health care system,” said Schumer, citing the post-World War II program in which the U.S. financed rebuilding in Europe.

At the consumer level, McConnell's bill would put into federal law the commitment from insurers that coronavirus tests will be cost-free to policy holders. Additionally, the bill requires coverage of coronavirus vaccines as a preventive service, at no cost to patients.

For the health care industry, the bill would establish a new Medicare payment for treating COVID-19 patients. It would suspend through the end of this year a 2% Medicare payment.

Meanwhile, industries of all kinds are lining up for help to avoid cratering the economy and devastating the home lives of their employees.

The total price tag is sure to grow beyond $1 trillion, lawmakers said.

Trump has already signed into law a $100 billion-plus bill to boost testing for the coronavirus and guarantee paid sick leave for millions of workers hit by it. Earlier, Congress passed and Trump signed an initial $8.3 billion effort.

As Congress rushes to compile the sweeping economic rescue package, the biggest undertaking since the 2008 recession and financial crisis, in a matter of days, it also is considering its own way of doing business.

Pelosi tasked a top committee chairman to study potential changes in House procedures as some lawmakers press for remote voting.

The Senate plans to remain in session this weekend. The House, which is on recess, won't be recalled until it's time to vote.

In the House, Reps. Mario Diaz-Balart, R-Fla., and Ben McAdams, D-Utah, released statements saying they had tested positive for COVID-19 — the first two known cases in Congress. Several other lawmakers have cycled in and out of self-isolation after exposure to individuals who had later tested positive for the virus.

Economists say the country is probably already in recession and the massive rescue package now being drafted would probably not be enough to stop millions of job losses.