Younger adults are large percentage of US coronavirus hospitalizations, according to new CDC data 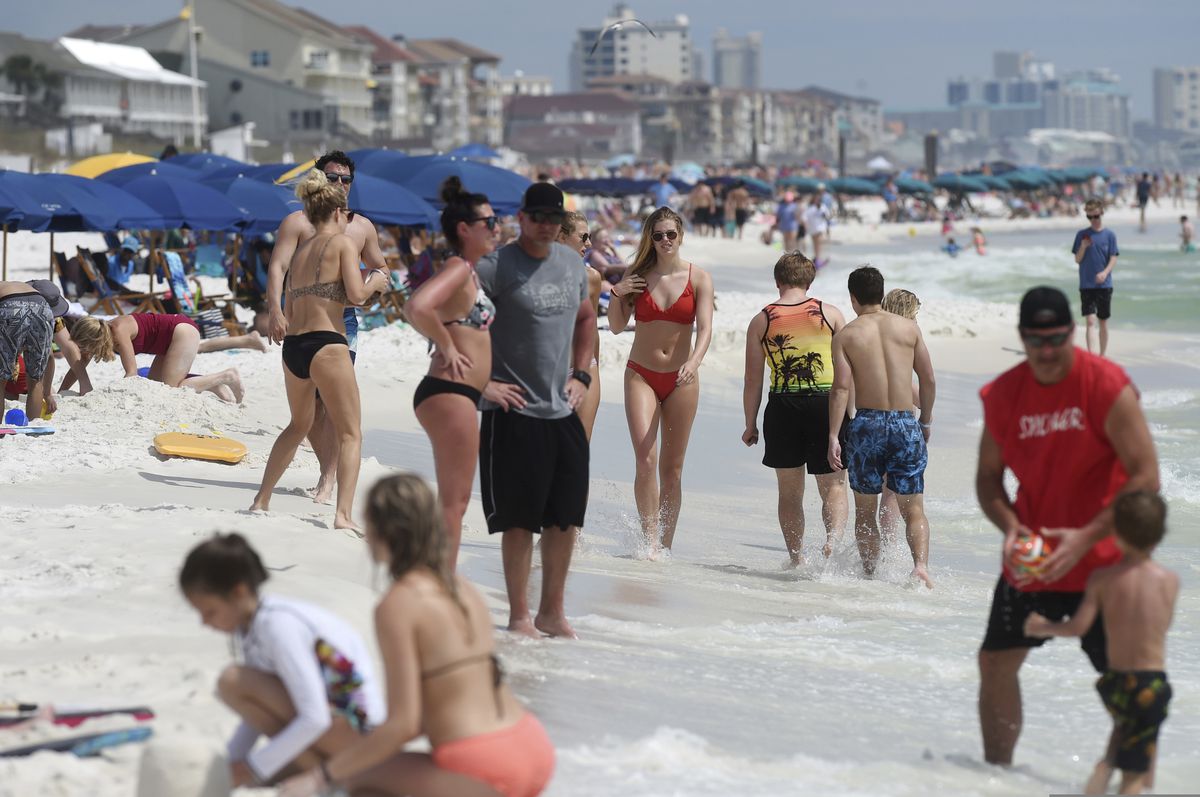 Beachgoers enjoy a sunny day in Destin, Fla., Wednesday, March 18, 2020. There's a new type of social policing out there that's developed almost as quickly as the viral disease that spurred its arrival. It's called "quarantine shaming," calling out those who are leaving the house for daily activities or who aren't abiding by social distancing rules. And it's part of a new reality for Americans who must navigate a world of rapidly evolving social norms in the age of COVID-19. (Devon Ravine/Northwest Florida Daily News via AP, File)

Beachgoers enjoy a sunny day in Destin, Fla., Wednesday, March 18, 2020. There's a new type of social policing out there that's developed almost as quickly as the viral disease that spurred its arrival. It's called "quarantine shaming," calling out those who are leaving the house for daily activities or who aren't abiding by social distancing rules. And it's part of a new reality for Americans who must navigate a world of rapidly evolving social norms in the age of COVID-19. (Devon Ravine/Northwest Florida Daily News via AP, File)

The deadly coronavirus has been met with a bit of a shrug among some in the under-50 set in the United States. Even as public health officials repeatedly urged social distancing, the young and hip spilled out of bars on Bourbon Street. They gleefully hopped on flights, tweeting about the rock bottom airfares. And they gathered in packs on beaches.

Their attitudes were based in part on early data from China, which suggested covid-19 might seriously sicken or kill the elderly - but spare the young.

A Centers for Disease Control and Prevention analysis of U.S. cases from Feb. 12 to March 16 that was released Wednesday shows that 38% of those sick enough to be hospitalized were younger than 55 years.

Earlier this week, French health ministry official Jérôme Salomon said half the 300 to 400 coronavirus patients treated in ICUs in Paris were younger than 65 years and, according to numbers presented at a seminar of intensive care specialists, half the ICU patients in the Netherlands were under the age of 50.

At a White House news conference on Wednesday, Deborah Birx, the response coordinator of the nation's coronavirus task force, warned about the concerning reports from France - and Italy, too - about "young people getting seriously ill and very seriously ill in the ICUs."

She called out younger generations in particular, for not taking the virus seriously, and warned of "disproportional number of infections among that group."

President Donald Trump himself reinforced her warning, "We don't want them gathering, and I see they do gather, including on beaches and in restaurants, young people. They don't realize, and they're feeling invincible."

The CDC report looked at a total of 4,226 covid-19 cases, with much of the data coming from the outbreaks among older adults in assisted living. As in China, the highest percentage of severe outcomes were among the elderly. About 80% of people who died were 65 years and older.

However, the percentage with more moderate or severe disease requiring hospitalization is more evenly distributed between the old and young, with 53% of those in ICUs and 45% of those hospitalized 65 years and older.

"These preliminary data also demonstrate that severe illness leading to hospitalization, including ICU admission and death, can occur in adults of any age with COVID-19," researchers wrote.

There was more encouraging news about children in the United States. Those 19 years and younger who were tested appear to have milder illness with almost no hospitalizations. A much larger sample of children in China, as detailed in the journal Pediatrics this week, found that most children had mild to moderate illness.

The CDC report did not specify if the younger patients had underlying conditions that might make them more vulnerable, but Anthony Fauci, the head of the National Institute on Allergy and Infectious Diseases, commented on a CNN show on Wednesday night that some did.

One younger adult, a University of Utah genetics researcher, Clement Chow, has been tweeting about his experiences. "Important point: we really don't know much about his virus. I'm young and not high risk, yet I am in the ICU with a very severe case," he wrote. He said he was facing respiratory failure and put on oxygen.

Public health experts say it's difficult to compare coronavirus numbers by age across countries at this stage due to the limited numbers tested and that differences may be due to the environment, lifestyle, demographics or something about the virus itself.

There may be a high percentages of young smokers in some areas of France, for example. Or "the high proportion of critically ill young people in the Netherlands may reflect the relatively younger population," the Dutch news service NRC, surmised.

Maybe some young people who were tested happen to be in cities or industrial areas with a lot of pollution that might impact their susceptibility to serious respiratory illness. Or the bar for admission to the hospital and the quality of treatments may vary enough by country that it impacts the course of the illness.

Adolfo Garcia-Sastre, the director of Global Health and Emerging Pathogens Institute at the Icahn School of Medicine at Mount Sinai in New York City, said the numbers are difficult to interpret because there are so few people who have been tested. He said some populations may be overrepresented due to public health officials focusing on testing of clusters of people who live together and may be of similar ages.

However, Garcia-Sastre said, the numbers show it’s clear “everybody has risk. Even in young people there is a percentage that has serious infection.”