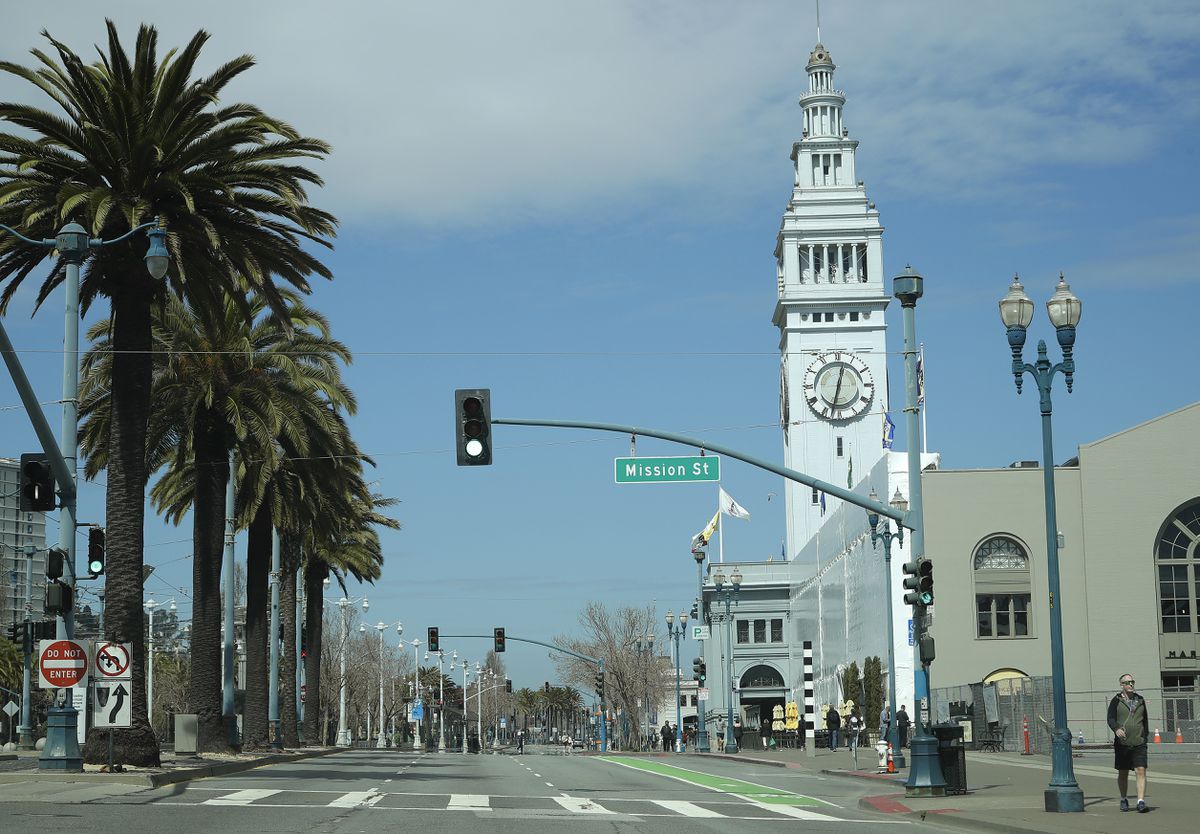 People walk along the Embarcadero on Sunday, March 22, 2020, in San Francisco. Some 40 million Californians are coping with their first weekend under a statewide order requiring them to stay at home to help curb the spread of the coronavirus. (AP Photo/Ben Margot)

People walk along the Embarcadero on Sunday, March 22, 2020, in San Francisco. Some 40 million Californians are coping with their first weekend under a statewide order requiring them to stay at home to help curb the spread of the coronavirus. (AP Photo/Ben Margot)

The governors of Ohio and Louisiana issued “stay-at-home” orders on Sunday, instructing residents to restrict their daily movements to all but the most essential activities as governments around the world began or extended nationwide lockdowns in order to stem the coronavirus pandemic.

But a senior official with the World Health Organization warned that even those extraordinary measures might be not be enough to contain the virus, which has now infected more than 335,000 people and killed more than 14,000.

"What we really need to focus on is finding those who are sick, those who have the virus, and isolate them, find their contacts and isolate them," Mike Ryan, the World Health Organization's chief emergency expert, said in a Sunday interview with the BBC.

Testing has been inconsistent across nations, with U.S. officials advising people to get tested only if they show symptoms of covid-19, the disease caused by the virus. More than 33,000 infections have been reported in the United States, with 417 deaths.

"If we don't put in place the strong public health measures now, when those movement restrictions and lockdowns are lifted, the danger is the disease will jump back up," Ryan said.

Spain is extending its national lockdown for another 15 days. As of Sunday evening, the country had more than 28,700 confirmed cases of infection, and 1,772 people had died, the numbers compiled by Johns Hopkins University show.

In the United Kingdom, which has confirmed more than 5,000 infections and 234 deaths, the nation's health services planned to notify 1.5 million people with serious health problems that they should not leave their homes for the next 12 weeks. Those at high risk from the virus include people with severe respiratory problems, certain cancers and people with compromised immune systems. Prime Minister Boris Johnson has said that patients suffering from the effects of the coronavirus threatened to overwhelm the country's health-care system.

Italy, which has recorded the highest number of deaths of any country - 5,476 - continued to confine its citizens to their homes. Authorities reported 651 new deaths, which was the lowest percentage increase since the beginning of the outbreak.

Some took that cautiously as a sign that strict quarantine measures were helping. "I hope and we all hope that these figures can be borne out in the coming days. But do not let your guard down," Italian Civil Protection Chief Angelo Borrelli told reporters, according to Agence France-Presse.

In Australia, which has reported more than 1,300 infections and seven deaths, the government closed pubs, athletic facilities, entertainment venues and houses of worship starting Monday. Restaurants and cafes will be allowed only to deliver food or provide takeout.

Prime Minister Scott Morrison called those social-distancing measures the "biggest weapon" against the coronavirus, and he chastised Australians who turned up on beaches in large numbers over the weekend and "crammed venues in our major cities."

The United Arab Emirates further tightened restrictions on its citizens, closing all bridges to restrict movement. And the nation's flagship air carrier significantly curtailed routes. Other countries in the Persian Gulf region have issued full lockdowns.

Albania declared that it would ban all commercial air travel in and out of the country starting at midnight.

And in Lebanon, where authorities have been unable to staunch a large rise in infections following a national lockdown, the army was called in to keep people in their homes.

The limiting of daily movements didn't spare national leaders. German Chancellor Angela Merkel was placed under quarantine after being treated by a doctor on Friday who tested positive for the virus. And U.S. Sen. Rand Paul's office announced that the Kentucky Republican had tested positive, the first senator and third member of Congress to do so.

President Donald Trump has said he doesn't envision the need for nationwide restrictions. California, New York and other states have told people to stay in their homes except for vital tasks, such as trips to grocery stores.

Officials in the Washington area have not ordered residents to stay home. The District of Columbia reported 102 cases as of Sunday evening, with two deaths. Maryland and Virginia had 244 and 221 infections respectively, with each state reporting three deaths.

In New York, which now accounts for one-third of coronavirus-related deaths in the U.S., state and city officials were bracing for an onslaught of patients at hospitals. Democratic Gov. Andrew Cuomo, who said Sunday that the death toll had reached 114, announced an emergency order to expand hospital capacity by a minimum of 50%, with a goal of 100%. That would take the number of available hospital beds statewide from 53,000 to 110,000.

The number of intensive care unit beds would depend on the number of ventilators available in the state, Cuomo said, portending the grim decisions that health-care workers may soon face to restrict ventilators and other life-saving equipment.

Other states have seen resistance to strict measures no social interactions. In Michigan, the state's chamber of commerce has implored the governor not to invoke a statewide order, fearing economic devastation to businesses.

Trump administration officials were keenly aware of the threat posed to the U.S. economy as unemployment claims were expected to skyrocket and whole sectors ground to a halt.

On Capitol Hill, bipartisan negotiations over a more than $1 trillion financial rescue package faltered on Sunday, and a bill sponsored by Republicans failed in a key procedural vote.

Republican and Democratic lawmakers have been especially divided over a $425 billion pool for loans and loan guarantees, which Democrats called a "slush fund" because the Treasury Department would have broad discretion over dispensing the money.

Treasury Secretary Steven Mnuchin promoted the bill as a way to help keep businesses afloat and retain their employees until the worst phase of the pandemic had passed. He said that if the package proved insufficient, the administration would go back to Congress for more assistance.

While Americans began to grapple with the consequences of prolonged economic stagnation - job loss, possible home foreclosures, loss of health insurance - members of Congress were in a standoff, with Republicans seeming to dare Democrats not to vote for their $1.8 trillion package, which they said would get money flowing to businesses and into Americans' pockets.

"We have integrated a number of ideas the Democrats have had over the 48 hours," Senate Majority Leader Mitch McConnell, R-Ky., told reporters. "Now we're at the point . . . where people will shortly have to say yes or no." McConnell said he was confident both sides would reach an agreement.

House Speaker Nancy Pelosi, D-Calif., told reporters that Democrats would introduce their own bill "and hopefully it will be compatible" with legislation in the Senate. Pelosi met on Sunday with Mnuchin, McConnell, Senate Minority Leader Chuck Schumer, D-N.Y., and House Minority Leader Kevin McCarthy, R-Calif.

"We're continuing to talk . . . we want to get to an agreement," Schumer said after the meeting.

Beyond Washington, impatience and frustration with the Trump administration's plan for combating the virus began to build among some governors and mayors. The president has sent mixed messages in recent days, particularly about whether he has invoked a federal law to require manufacturing companies to make ventilators and other critical medical equipment.

"We're all building the airplane as we fly it right now," Michigan Gov. Gretchen Whitmer, a Democrat, said on ABC's "This Week." "It would be nice to have a national strategy."

On Sunday, the administrator of the Federal Emergency Management Agency, Peter Gaynor, said Trump had not yet invoked the Defense Production Act, contradicting what the president had told reporters two days earlier. Trump has said that companies are voluntarily offering to produce necessary equipment, but it's not clear which companies or when they might produce the equipment.

Later, a White House official said Trump had "invoked" the law, but it wasn't clear that the president had ordered any companies to begin making equipment.

In a regular briefing from members of the president's coronavirus task force, Trump's trade adviser said the law would be used in a targeted way to sort out problems in the supply chain, if they arise, but companies were already acting to supply essential equipment.

Peter Navarro, the White House director of trade and manufacturing policy said that companies had volunteered to produce items, including face masks and hand sanitizer.

"We're getting what we need without putting the heavy hand of government down," Navarro said.

Trump said he resisted imposing the act on companies because he thought it amounted to a government takeover of private businesses.

“The concept of nationalizing our business is not a good concept,” Trump said. “We have the threat of doing it if we need it.”