Italy’s coronavirus deaths may be more a preview than anomaly. 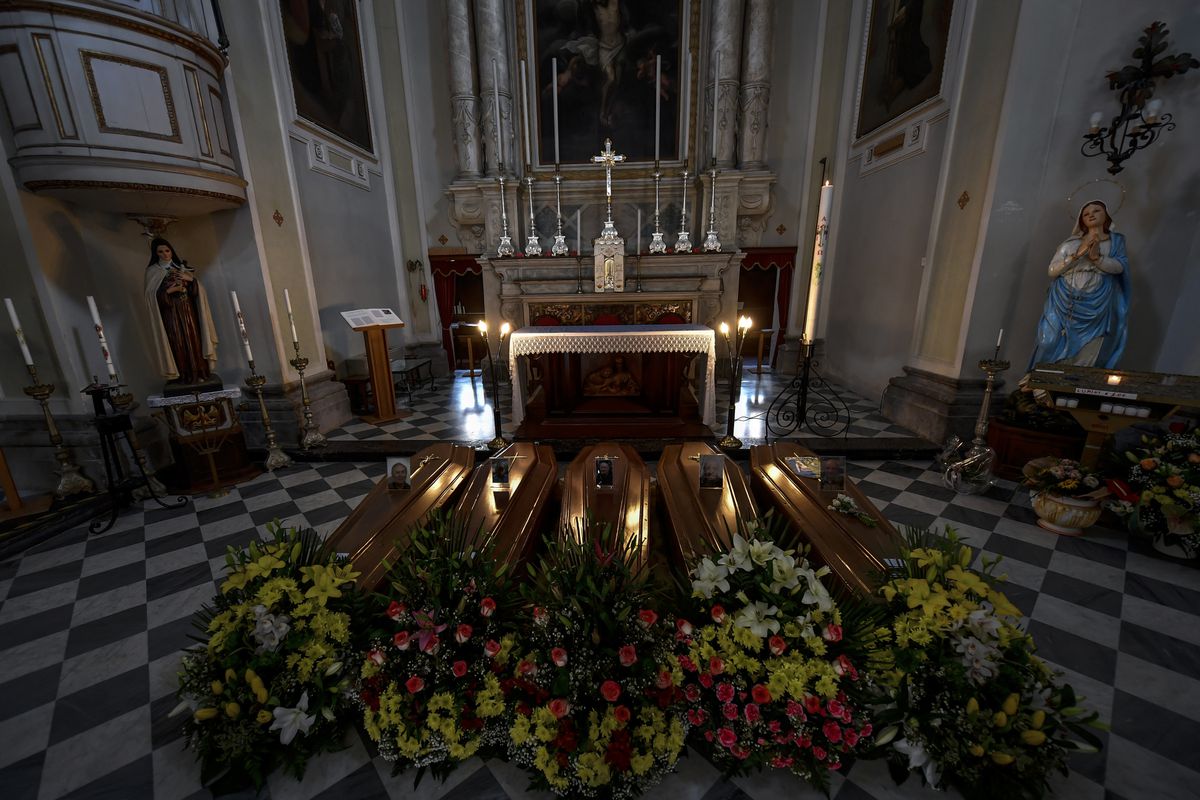 Coffins wait to be transported to cemetery, in the church of Serina, near Bergamo, Northern Italy, March 21, 2020. Italy's tally of coronavirus cases and deaths keeps rising, with new day-to-day highs: 793 dead and 6,557 new cases. (Claudio Furlan/LaPresse via AP)

Coffins wait to be transported to cemetery, in the church of Serina, near Bergamo, Northern Italy, March 21, 2020. Italy's tally of coronavirus cases and deaths keeps rising, with new day-to-day highs: 793 dead and 6,557 new cases. (Claudio Furlan/LaPresse via AP)

ROME -- Italy has become the flash point of the coronavirus pandemic, with a death toll at 6,077 and counting -- the highest in the world. More than 2,000 Italians have been killed by the virus in the past four days alone.

The staggering toll stands for now as a worst-case scenario for what happens when a country is caught unprepared. Italy's high elderly population has exacerbated the problem.

But while some unique aspects have amplified the scale, doctors and health officials say other countries should regard Italy not as an outlier or an example of missteps, but as a harrowing preview for the hardships they might soon have at hand. Other countries could easily follow the pattern in Italy, with the number of casualties soaring weeks after an initial, drastic spike in cases.

The disaster in Italy does not stem from gross government negligence. Rather, analysts say it is partly a consequence of the weeks between the emergence of the outbreak and the government decision to absolutely lock down the population. And though many in Italy now argue their government waited too long, democracies across the West have been mulling the same decisions -- and in some cases have acted less decisively.

Neither is the crisis in Italy a product of an especially feeble health system. Italy has fewer acute-care beds relative to its population than South Korea or Germany, but more than Britain or the United States. The death toll is being intensified by breakdowns at hospitals, but the strains are the same as could happen anywhere in the developed world that sees such a surge in coronavirus cases.

"This emergency is something so huge that all over the world, not just in Italy, you're going to be forever unprepared," said Massimo Galli, head of the infectious disease unit at the Sacco Hospital in Milan. He said governments everywhere "are taking this classic attitude to face the problem slowly."

According to the most recent data from Italy's national health service, those who have died had a median age of 80. But the virus isn't hitting exclusively the oldest and most frail. Some 45% of the dead were between ages 60 and 79. And among the first 3,200 deaths reported in the country, 36 were in their 30s or 40s.

At nearly any age, men appear to be more susceptible -- something reflected in data from other countries, too, and that in Italy could be linked to the higher male smoking rate.

Even if Italy's death count is heightened by its elderly population, doctors say there is another reason other Western countries haven't yet seen a comparable toll: The virus may have been spreading in Italy for longer, and it kills slowly.

The people with the most severe coronavirus cases can remain in intensive care beds for weeks before dying. That triggers a cascade of problems during a large-scale outbreak, as has been playing out now in northern Italy, where patients have been arriving at hospitals - struggling to breath -- only to find that there are no beds or ventilators.

"The massive arrival of patients becomes impossible to manage," said Mirco Nacoti, a doctor at Papa Giovanni XXIII Hospital in Bergamo, where he said there are 500 patients in need of intensive care and just 100 ICU beds. "The health system is totally destroyed. Nobody has seen a similar situation. It's a catastrophe."

The death count has continued to soar even as the daily increase of total cases has slightly decelerated. Two weeks ago, on the same day that Prime Minister Giuseppe Conte announced a nationwide lockdown, 463 people had died of the virus.

Since then, the number of total cases in the country has grown sevenfold. But the death toll is 13 times greater - and has been devastating in a country one-twentieth the population of China.

According to the Italian government's official data, a staggering 9.5 percent of the people to contract coronavirus have died. In Lombardy, the hard-hit northern region, the data indicates an even higher mortality rate - more than 13 percent. Such rates are far above those seen in other parts of the world, including Hubei province in China, and have led at least one Italian doctor to speculate that Italy could be seeing a more aggressive viral strain.

But most virologists here, citing scientific analysis of the strains, say the virus appears to be no different than the one that hit China.

The actual Italian death rate, they say, is probably far lower than what the government numbers suggest. The unofficial estimates assume the actual number of people infected with the virus -- people who have not yet been tested -- is massive. In other words, several hundred thousand people in Italy may be carrying the virus.

"It's a huge iceberg," said Fabrizio Pregliasco, a virologist at the University of Milan. "We are only looking at those who are sick."

Though Italian leaders touted widespread testing at the beginning of the outbreak, the government has applied tight guidelines for who can be given swabs. Health officials have been testing those who have severe symptoms and are in need of obvious medical care. Government authorities have said mass-scale testing could put health-care workers at risk, and that the best method to slow the transmission rate is for people to simply stay at home.

But this strategy has a downside, because it fails to find asymptomatic or mild carriers, and increases the odds that the virus spreads undetected. Even amid a lockdown, such carriers could be taking busses, going to the grocery store, or infecting their families. Italy's health ministry, in a statement provided to The Washington Post, said it is trying to broaden its testing, particularly of health workers and people who had contact with positive patients.

"We are evaluating all of the technological and epidemiological tools to further improve this tracking," the ministry said.

Other countries, notably South Korea, have succeeded in controlling the virus by rigorously testing those with suspected exposure. Germany has also tested more liberally than most other European countries, a partial explanation for its statistically low death rate, along with the fact that for the first outbreaks in that country have disproportionately hit the young. In Germany, experts have said they expect the death rate to eventually rise - becoming more in line with Italy's.

Another major factor in Italy's enormous death toll is the struggle of hospitals to keep up. In a paper released several days ago, a team of doctors at the main public hospital in Bergamo described how their own facility was buckling under the pressure. And they said other facilities in the area were faring even worse -- short on ventilators, oxygen and protective equipment.

Health officials from Madrid to New York City are now bracing for similar problems. And though social distancing is aimed at reducing the rate that the virus spreads, allowing hospitals to more adequately cope, in Italy the rigid measures came too late, experts say.

At the beginning of the outbreak, the country put 11 small towns under lockdown. But even then, there were signs that many cases were occurring elsewhere. By early March, regional authorities were signaling alarm about two new areas -- this time, in Bergamo province. The areas happened to be heavily industrialized. Business groups raised opposition. The government took no action.

"Of course, had the hard line been drawn immediately, we would've likely seen results," said Claudio Cancelli, the mayor of Nembro, one of the hotspot towns. "We ultimately were all a bit tardy in understanding the gravity of what was happening."

By the time the government took action -- locking down all of Lombardy on March 9, and all of the country two days later -- the explosion had already been set in motion.

Bergamo has become the flashing-red hotspot in Italy, responsible for more deaths than any other place in Italy. In Nembro alone, with a population of 11,500, some 120 people have died since the beginning of March -- as many deaths as the town normally sees in one year.

"We're still paying the consequences of what wasn't done [more than] two weeks ago," said Cancelli, who also tested positive for the virus and had a fever for several days.

Nacoti, one of the doctors, said that at the hospital in Bergamo, 30 percent of the health workers had also contracted the virus. He said the death toll in the area could be even higher than what is known, because some elderly people are likely dying at home, never arriving at the hospital.

“I’m afraid about my population. I’m afraid because Bergamo is destroyed,” he said. “I know that when this storm will stop, we’ll see a disaster, and it will be difficult to restart.”