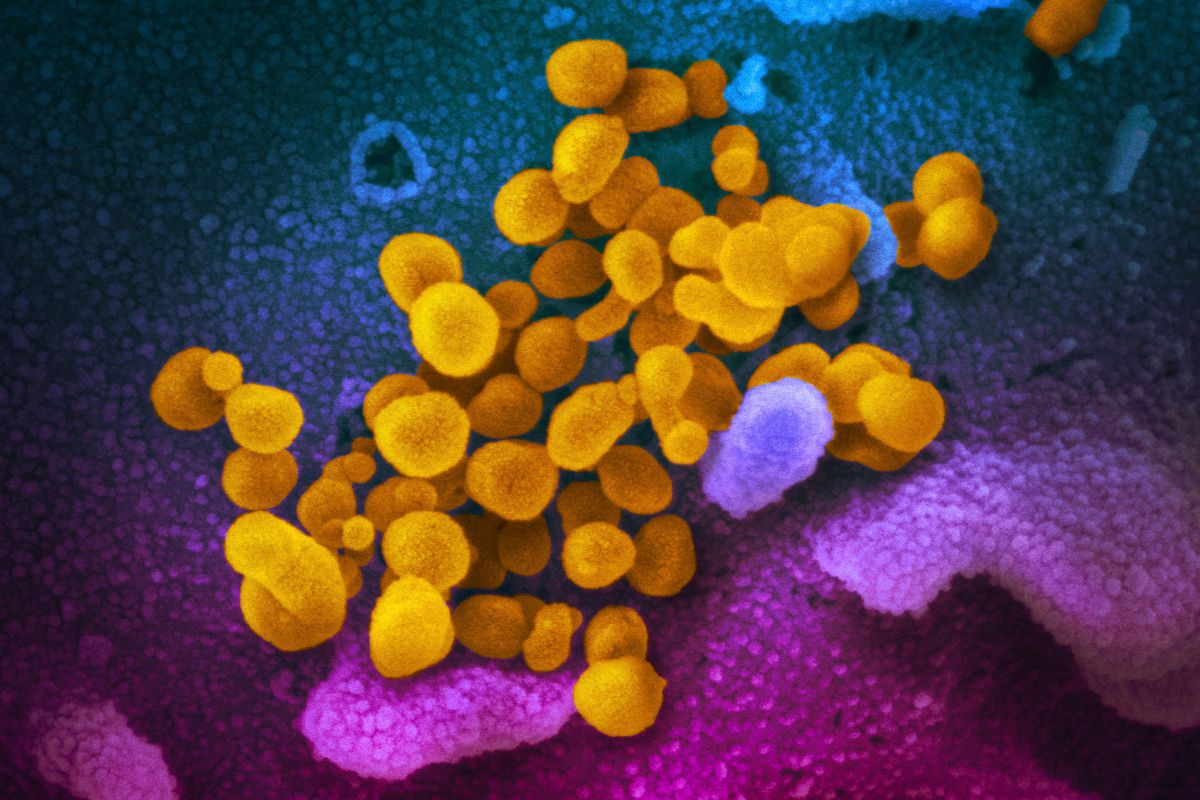 This undated electron microscope image made available by the U.S. National Institutes of Health in February 2020 shows the Novel Coronavirus SARS-CoV-2, yellow, emerging from the surface of cells, blue/pink, cultured in the lab. (NIAID-RML via AP)

This undated electron microscope image made available by the U.S. National Institutes of Health in February 2020 shows the Novel Coronavirus SARS-CoV-2, yellow, emerging from the surface of cells, blue/pink, cultured in the lab. (NIAID-RML via AP)

The coronavirus is not mutating significantly as it circulates through the human population, according to scientists who are closely studying the novel pathogen’s genetic code. That relative stability suggests the virus is less likely to become more or less dangerous as it spreads, and represents encouraging news for researchers hoping to create a long-lasting vaccine.

All viruses evolve over time, accumulating mutations as they replicate imperfectly inside a host's cells in tremendous numbers and then spread through a population, with some of those mutations persisting through natural selection. The new coronavirus has proofreading machinery, however, and that reduces the "error rate" and the pace of mutation. The new coronavirus looks pretty much the same everywhere it has appeared, the scientists say, and there is no evidence that some strains are deadlier than others.

SARS-CoV-2, the virus that causes the disease covid-19, is similar to coronaviruses that circulate naturally in bats. It jumped into the human species last year in Wuhan, China, likely through an intermediate species - possibly a pangolin, an endangered anteater whose scales are trafficked for traditional medicine.

Scientists now are studying more than 1,000 different samples of the virus, Peter Thielen, a molecular geneticist at the Johns Hopkins University Applied Physics Laboratory who has been studying the virus, told The Washington Post.

There are only about four to 10 genetic differences between the strains that have infected people in the U.S. and the original virus that spread in Wuhan, he said.

"That's a relatively small number of mutations for having passed through a large number of people," Thielen said. "At this point the mutation rate of the virus would suggest that the vaccine developed for SARS-CoV-2 would be a single vaccine, rather than a new vaccine every year like the flu vaccine."

It would be more like the measles or chickenpox vaccines, he said - something that would likely confer immunity for a long time.

"I would expect a vaccine for coronavirus would have a similar profile to those vaccines. It's great news," Thielen said.

Two other virologists, Stanley Perlman of the University of Iowa and Benjamin Neuman of Texas A&M University at Texarkana, both of whom were on the international committee that named the coronavirus, have told The Post that the virus appears relatively stable.

"The virus has not mutated to any significant extent," Perlman said.

"Just one 'pretty bad' strain for everybody so far. If it's still around in a year, by that point we might have some diversity," Neuman said.

Neuman contrasted the coronavirus with influenza, which is notoriously slippery.

"Flu does have one trick up its sleeve that coronaviruses do not have - the flu virus genome is broken up into several segments, each of which codes for a gene. When two flu viruses are in the same cell, they can swap some segments, potentially creating a new combination instantly - this is how the H1N1 'swine' flu originated," Neuman said.

It is possible that a small mutation in the virus could have outsized effects in the clinical outcome of covid-19, the experts say. That has been known to happen with other viruses. But there's no sign that this is happening with the new coronavirus.

The dramatic death rates in Italy, for example, are most likely due to situational factors - an older population, hospitals being overwhelmed, shortages of ventilators and the resulting rationing of lifesaving care - rather than some difference in the pathogen itself.

"So far we don't have any evidence linking a specific virus [strain] to any disease severity score," Thielen said. "Right now disease severity is much more likely to be driven by other factors."

Although one team of scientists earlier this year suggested that there might be two distinct strains of the virus with different levels of typical disease severity, that conjecture has not been embraced by the scientific community.