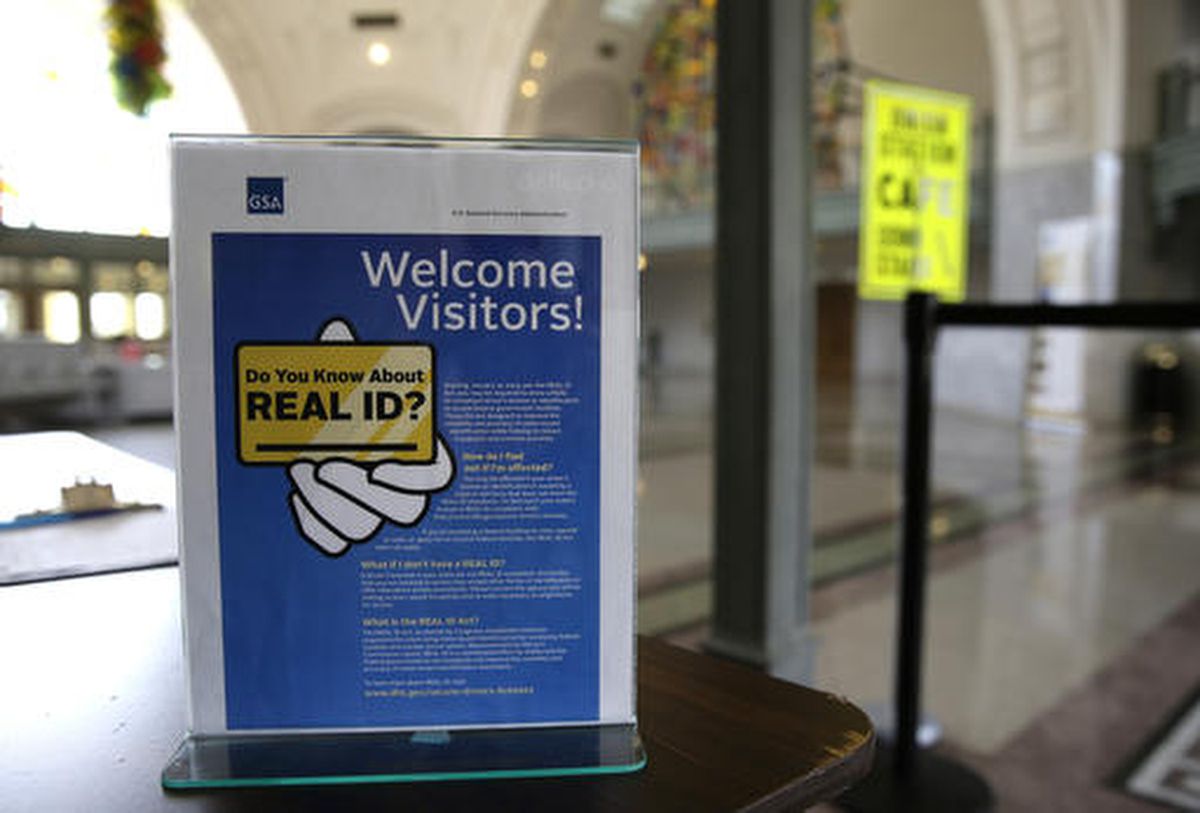 A sign at the federal courthouse in Tacoma, Wash., is shown to inform visitors of the federal government's REAL ID act, which requires state driver's licenses and ID cards to have security enhancements and be issued to people who can prove they're legally in the United States. (AP Photo/Ted S. Warren, File)

A sign at the federal courthouse in Tacoma, Wash., is shown to inform visitors of the federal government's REAL ID act, which requires state driver's licenses and ID cards to have security enhancements and be issued to people who can prove they're legally in the United States. (AP Photo/Ted S. Warren, File)

President Donald Trump said Monday that he is pushing back the deadline for when Americans will be required to have the new Real ID credential to board domestic flights.

At a White House briefing, Trump said he is postponing the Oct. 1 deadline, citing the coronavirus crisis and concerns of crowding at state departments of motor vehicles from people trying to meet the looming deadline.

"At a time when we're asking Americans to maintain social distancing, we do not want to require people to go with their local DMV," Trump said.

Trump did not say what the new deadline was but said it would be announced "very soon."

Governors and lawmakers had asked for the extension in recent days, citing the states' inability to process Real ID applications during the coronavirus crisis. Many states have reduced or completely shut down motor vehicle services as part of their response to the public health emergency.

Maryland Gov. Larry Hogan, who chairs the National Governors Association, sent a letter to the Trump administration last week saying the coronavirus outbreak was already disrupting states' efforts to issue the credential and calling for a delay of the deadline. Some state and industry leaders say they expect at least a year extension.

"We are pleased that the federal administration has readily agreed to the governors' request to extend the REAL ID deadline. This will help contribute to our efforts to slow the spread of COVID-19, and avoid major confusion for the states," Hogan, a Republican, said in a statement Monday night.

States have been scrambling to comply with the 2005 domestic security program known as the Real ID Act, which was designed to help prevent terrorist attacks and reduce the number of licenses granted to undocumented immigrants. By law, states are mandated to issue IDs with counterfeit-resistant security features; applicants must provide several documents proving their identity and legal U.S. residency.

Most states are in the early phases of issuing the new security-enhanced licenses and identification cards. About one-third of Americans have a Real ID credential, according to Department of Homeland Security data.

Because Real ID requires an in-person visit to the DMV, applicants are not able to get the credential during the coronavirus closures.

The federal government had refused to give an extension in recent months, even as it was clear that many states were struggling to issue the credential. It was expected that starting Oct. 1 every U.S. air traveler would be required to present a Real ID-compliant license or another acceptable form of identification, such as a U.S. passport, to board a domestic flight as the last phase of implementation of the law.

Trump's announcement was also welcomed by the travel industry. Roger Dow, president and chief executive of the U.S. Travel Association, said the extension of the deadline "is clearly the wise course of action at this juncture."

The group had asked the Department of Homeland Security to delay the requirement until the economic environment improves and it can ensure that access to air travel will not be negatively impacted once enforcement begins.

“The already difficult task of bringing the country closer to REAL ID compliance is now clearly impossible due to the coronavirus crisis,” Dow said in a statement. “Clearly the administration understands that the economic damage of coronavirus is already massive, and as we move toward a recovery phase it would be terrible if the REAL ID deadline hits and creates yet another obstacle to people traveling. To get this economy moving again, people need to be able to move again.”