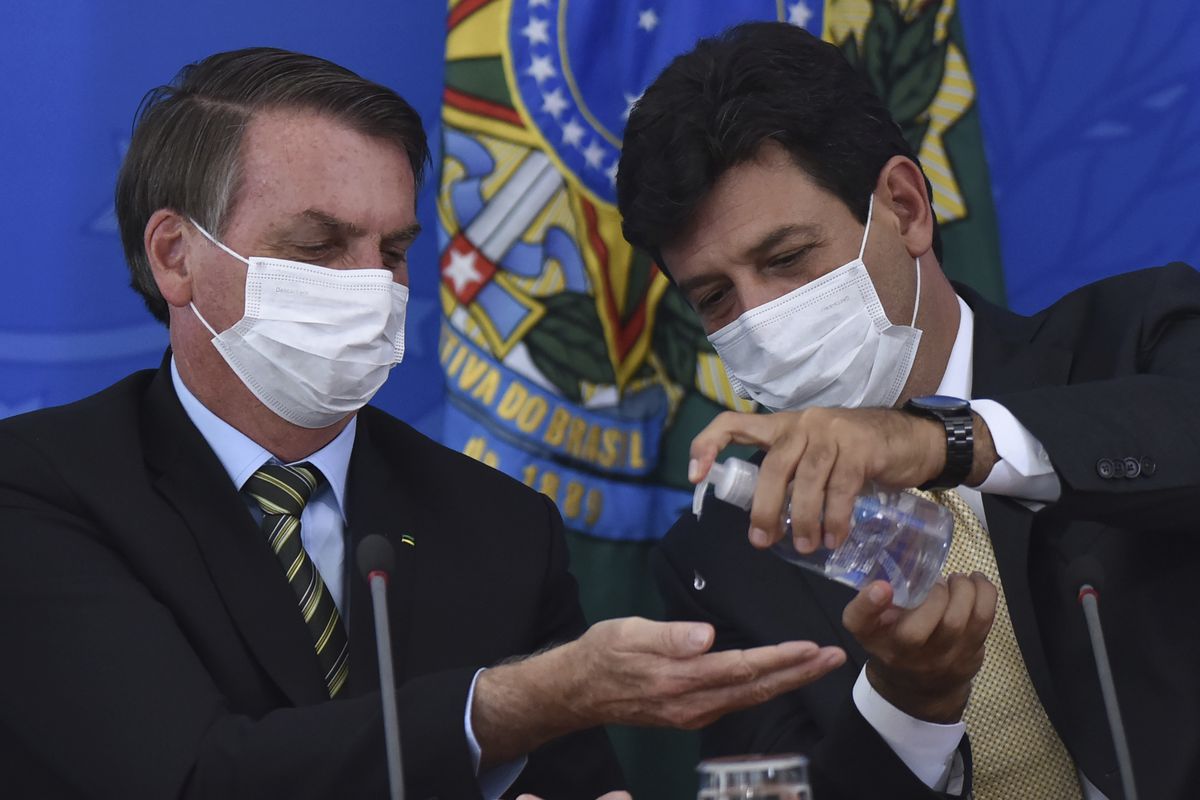 Wearing masks, Brazil's Health Minister Luiz Henrique Mandetta, right, applies alcohol gel on hands of President Jair Bolsonaro's hands during a press conference on the new coronavirus, at the Planalto Presidential Palace in Brasilia, Brazil, Wednesday, March 18, 2019. For most people COVID-19 causes mild or moderate symptoms. For others, especially the elderly and people with existing health problems, it can cause many other serious illnesses, including pneumonia. (AP Photo/Andre Borges)

Wearing masks, Brazil's Health Minister Luiz Henrique Mandetta, right, applies alcohol gel on hands of President Jair Bolsonaro's hands during a press conference on the new coronavirus, at the Planalto Presidential Palace in Brasilia, Brazil, Wednesday, March 18, 2019. For most people COVID-19 causes mild or moderate symptoms. For others, especially the elderly and people with existing health problems, it can cause many other serious illnesses, including pneumonia. (AP Photo/Andre Borges)

RIO DE JANEIRO - He said self-isolation was “mass confinement.” He called the novel coronavirus a “little cold.” He asked, if only people older than 60 are at risk, “why close the schools?”

This was Jair Bolsonaro, leader of Latin America's largest country, calling on Brazilians to return to jobs, public spaces and commerce amid the coronavirus pandemic, contradicting not only his own health officials, but also the global consensus on how to see countries through the pandemic without a crippling loss of life.

It was a portrait of Bolsonaro isolated and unbound: Alone before the camera, attacking the media, undermining political opponents, indulging talking points he's used since the crisis began even as the disturbing reality overtook his sanguine predictions.

"Most of the media has been countervailing," he declared in a national address Tuesday. "They spread the sensation of dread, with their flagship the high number of victims in Italy. The perfect scenario to be used by the media to spread hysteria."

"In my particular case," the 65-year-old former army officer added, "with my history as an athlete, if I were infected by the virus, I wouldn't need to worry. I wouldn't feel anything or, if very affected, it would be like a little flu or little cold."

Rather than calming panic and confusion, Bolsonaro's pronouncements appear to be only fueling them. As confirmed cases and deaths mount - Brazil leads Latin America in both - fear is growing over whether the country's institutions and leaders will rise to the challenge of a historic moment, with far less room for error than wealthier countries already in the full grip of coronavirus.

The minister of health has warned the health system will collapse by the end of April. Millions of already impoverished people face weeks without income. Hunger could sweep the country. Rio and Sao Paulo clang each night with the sound of Panelaços, pot-and-pan-banging protests against Bolsonaro's dismissal of the virus.

But to Bolsonaro, things aren't that bad. He says the measures being taken by state governors to slow the disease's spread - encouraging social isolation, closing churches, malls and schools, banning large crowds - are needlessly excessive.

"It will pass shortly," he predicted Tuesday. He called on businesses and schools to reopen. "Our lives have to continue; jobs should be maintained."

Bolsonaro appears to be making a high-stakes bet, risking what public health analysts warn could be mass casualties and a ruptured health system to keep the economy running. It's much the same argument that President Donald Trump, whom Bolsonaro has often sought to emulate, is making in the United States.

"Bolsonaro seeks legitimacy by reproducing President Trump's speeches," said Fernanda Magnotta, a political scientist at the Armando Alvares Penteado Foundation, a university in Sao Paulo. "But he forgets that Brazil does not have the same financial resources as the United States, and, therefore, cannot afford to say certain things. . . . We are talking about absolutely different countries."

Brazil is one of the most inequal countries in the world. More than 40 million people - nearly 20% of the population - work in the informal economy. They clean houses, sell snacks and hawk cheap food and merchandise on the beaches. The poor pack the favelas of Rio and Sao Paulo, slums where overcrowded and unsanitary conditions are expected to accelerate Brazil's outbreak. Nearly everyone in the lower classes depend on the public health care system, which in Rio was already at capacity and in turmoil even before coronavirus.

Critics say government proposals to meet the needs of society's most vulnerable during virus quarantines have either been counterproductive or woefully insufficient, weakening their chances of success.

Officials have proposed paying informal workers deprived of an income an untenable monthly sum of $40 per month. Then this week, in an overnight decree, Bolsonaro proposed allowing businesses to withhold contracted payments from their employees for up to four months, provoking a national uproar before he backed away.

Now the president is losing allies. Governors who were once supporters are going their own ways, Senate leader Davi Alcolumbre, a Bolsonaro ally stricken by covid-19, said the president was putting the country in danger.

"In this grave moment, the country needs serious leadership, responsible and committed to the life and health of the population," he said after Bolsonaro's speech Tuesday. "We consider the public position of the president today to be grave . . . attacking the containment measures against Covid-19."

"The president has missed the timing of this crisis and is now being hit by reality," said Carlos Melo, a political scientist and professor at the Institute of Teaching and Research in Sao Paulo. "He has been fighting the world by doubling down on his bet that the pandemic will not result in so many deaths after all."

By downplaying it as a "little cold," the Brazilian Society of Epidemiologists said, Bolsonaro is giving a "false impression to the population that the social containment measures are inappropriate."

Protests are growing. Every night for more than a week, Brazilians in cities across the country have banged pots and pans from their windows and balconies - a discordant nighttime lullaby for a country growing more sick.

For Eduardo Alfradique de Oliveira, a 32-year-old in the Rio neighborhood of Copacabana, it begins every night at exactly 8:28 p.m. A neighbor begins banging from a nearby window - a call to arms - and he grabs his pot.

“This isn’t a political issue,” he said. “It’s a human issue. He’s the president of the republic. We have to protest in any form that we can. People are going to die.”