More than 140 US nursing homes have reported coronavirus cases. Federal officials won’t say which ones. 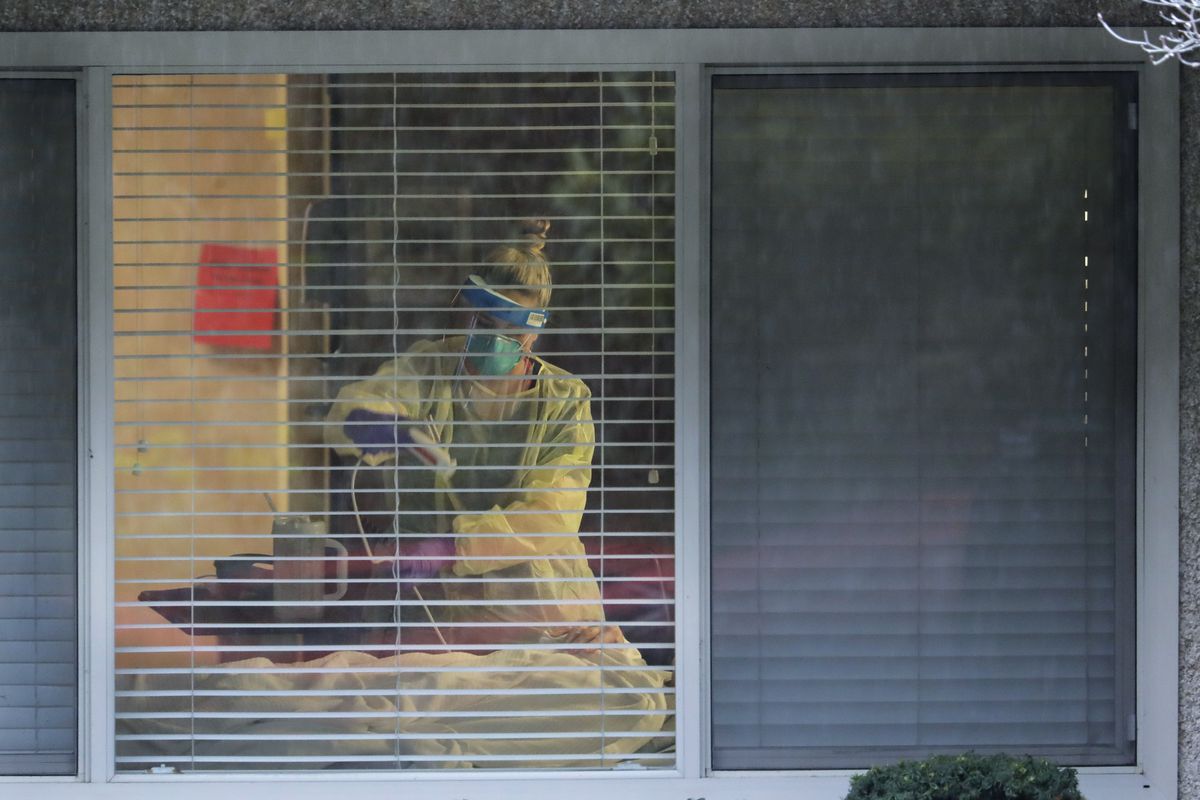 FILE - In this March 13, 2020, file photo, a nurse works in the room of a patient who has tested positive for the COVID-19 coronavirus at the Life Care Center in Kirkland, Wash., near Seattle. Burgeoning coronavirus outbreaks at this and other nursing homes in Illinois, New Jersey and elsewhere are laying bare the risks of the industry’s long-running problems, including a struggle to control infections and a staffing crisis that relies on poorly paid aides who can't afford to stay home sick. (AP Photo/Ted S. Warren, File)

FILE - In this March 13, 2020, file photo, a nurse works in the room of a patient who has tested positive for the COVID-19 coronavirus at the Life Care Center in Kirkland, Wash., near Seattle. Burgeoning coronavirus outbreaks at this and other nursing homes in Illinois, New Jersey and elsewhere are laying bare the risks of the industry’s long-running problems, including a struggle to control infections and a staffing crisis that relies on poorly paid aides who can't afford to stay home sick. (AP Photo/Ted S. Warren, File)

More than 140 nursing homes in the United States have at least one resident who tested positive for the coronavirus, according to federal government figures released earlier this week, but exactly which homes are affected and where they are, federal officials won’t say.

Their refusal to release the information has angered families, industry watchdogs and emergency personnel who say it deprives them of critical information as they try to ensure the safety of nursing home residents, who are among the most vulnerable to the disease.

"That's just not right. It's not ethical. It's not humane," said John BaRoss, who pulled his mother out of a long-term care facility in West Orange, New Jersey, on Friday because he believed she was safer at his home. "Families deserve to have the information. Let us have the information, and let us decide."

He started a Facebook group for families weighing similar decisions.

Likewise, emergency responders say the locations of nursing home outbreaks could be essential to their decision-making, leading them to don appropriate protective gear to prevent them from becoming sick or spreading it elsewhere. A nursing home near Newark, New Jersey, had to relocate about 90 residents to another facility Wednesday after coronavirus swept through the home.

"Getting the information is super important," said Doug Stern, spokesman for the International Association of Fire Fighters, the labor union representing 320,000 firefighters in the United States and Canada. "Once we get the information, we can make sure we take the proper precautions."

While media and public health officials have reported outbreaks of the coronavirus at dozens of nursing homes, many others have not been widely reported.

On Saturday, The Washington Post reported "at least 73" outbreaks at nursing homes and other elder care facilities around the nation. That figure was based largely on information from media reports and state officials.

The actual number may have been much higher. On Monday, a news release from Centers for Medicare and Medicaid Services, the federal agency that regulates nursing homes, said 147 nursing homes had a resident with coronavirus, and that figure included only nursing homes, not elder care facilities.

Citing data from the Centers for Disease Control and Prevention, the news release tucked the new figure in the seventh paragraph. The release said although "147 is a small fraction of the over 15,000 nursing homes across the country, given the disproportionate effect on our nation's older population, this is a cause for concern."

The Post on Monday requested a list of nursing homes with outbreaks from both the Centers for Medicare and Medicaid Services and the Centers for Disease Control and Prevention.

A CDC spokesman, Scott Pauley, told The Post he was "not sure [the list] will be released at this time."

With the onset of coronavirus, many nursing homes and similar facilities have prohibited visitors. They're also checking temperatures of residents more frequently and using more masks.

Since nursing homes often house vulnerable people living in close quarters with staff who come and go, it can be a challenge to keep them safe from the virus, experts said; this vulnerability makes it particularly important for nursing homes disclose publicly when they have an outbreak.

In issuing recommended procedures to nursing homes on March 13, CMS did not specifically instruct nursing homes to tell residents, their families or the public about a coronavirus outbreak. According to some experts, they should have.

"It's terrible - people have a right to know where this is happening," said Charlene Harrington, who has studied nursing homes for years and is professor emerita at the University of California San Francisco. "Why isn't CMS tracking this? These nursing homes should be made public - so that people have the option to take people out."

"They're protecting nursing homes here, not patients," she said.

Some nursing homes are notifying residents, staff and family members on their own, even without encouragement from federal regulators, and some are clamoring for testing for their residents who exhibit symptoms. But they are not necessarily sharing that information with the public.

Nursing homes in the HCR Manorcare chain have been instructed to notify families of patients by phone when an outbreak has been detected, spokesperson Julie Beckert said. She declined to say how many outbreaks had occurred in the chain.

"No, I cannot give that out," Beckert said in an email. "It changes a lot with testing and clearing."

Likewise, Genesis, another nursing home chain, said it is notifying residents and families when an outbreak has occurred. Among its 400 locations, it has had outbreaks at 15 homes, involving residents or staff, the company said, but it would not disclose which ones.

Golden Living Centers, another chain, did not respond to a request for information.

In West Virginia, Gov. Jim Justice, a Republican, ordered residents to remain at home Tuesday, spurred by a fast-spreading outbreak at the Sundale Nursing Home in Morgantown, a city of 31,000 on the northern edge of the state.

He said the nursing home infections had spiked to 16 residents and four staff members. Results of 50 additional tests there are still pending, he said, calling the surge "alarming." The state has reported 39 people so far with confirmed cases.

"We owe so much to so many, but especially to our seniors that have given us guidance beyond belief," Justice said during a live-streamed prayer session Wednesday. "This terrible virus, we know, attacks them, and attacks them first and foremost, and those are the ones that we have to look out for in every way."

In New Jersey, dozens of residents were relocated Wednesday from St. Joseph's Senior Home in Woodbridge, New Jersey. after several residents were hospitalized with covid-19, and a number of other residents fell ill. At least a dozen staff members were out sick with respiratory symptoms, state health officials said this week, leaving the nuns that operate the facility unable to care for the residents.

CareOne at Hanover Township, a facility in Whippany, New Jersey, said it received the St. Joseph residents Wednesday, according to a company statement, after moving existing residents to other facilities.

Health Commissioner Judith Persichilli said Wednesday it is possible the facility would ultimately close. Sixteen of the state's 62 deaths from coronavirus were linked to long-term care facilities, she said.

Robyn Grant, director of public policy at the National Consumer Voice for Quality Long-Term Care, said information about which homes have had an outbreak would be critical for families, especially those deciding where to place a relative.

"It would be really important information for consumers," she said. "There should be a place where one can go to get this information."

But The Post found many visitors and vendors were not told about the possible infection directly and instead learned it from the news.

A Life Care spokesman has said the home did not have the "manpower" to call all visitors and was providing information to the media so it would reach the public, and then visitors could seek medical care on their own.

Bridget Parkhill, 54, whose 76-year-old mother is a resident at Life Care, said health officials should publicize the information so friends and relatives can steer clear of nursing homes or monitor their care, and the community can send get-well cards.

"The problem is that people aren't aware," she said. "If they knew that someone tested positive in XYZ nursing home, they would know not to go in there. . . . Information is the only thing that's going to make things better for us."

The initial outbreak at Life Care sickened dozens of people and killed 35, and it served as a warning to thousands of other homes to guard against infection. Notifying the public might also help people pinpoint which nursing homes failed to prepare, she said.

"They were given two weeks' notice to get their stuff together," she said.

At least 48 firefighters have tested positive for coronavirus, although Stern said he suspects the number is higher because tests are not yet widely available.

In Kirkland, more than 40 firefighters were quarantined - almost half the entire force - and at least one tested positive for the virus.

Florida, home to nearly 700 nursing homes, has not provided the names of nursing homes with positive tests after repeated requests from The Washington Post.

Agency spokesman Patrick Manderfield did not answer questions last week about why the agency has not released the names. He referred a reporter to the Florida Division of Emergency Management, which referred inquiries Wednesday to the state Department of Health. The department did not immediately respond to a request for the names.

Florida's Department of Health said 40 nursing home residents had tested positive for coronavirus as of Wednesday. Florida had approximately 72,700 people residing in such facilities in 2017, the most recent data available from the Kaiser Family Foundation, a health-policy nonprofit.

Emergency personnel say it would be helpful to know the names of each nursing home that has had a positive coronavirus test, but they say they are treating vulnerable nursing homes as if they already are infected.

Dispatchers in many areas are screening callers by asking if they have symptoms or have traveled recently outside of the United States. Once they arrive at a scene, as an additional layer of screening, EMTs and paramedics often ask the same questions again. EMTs and firefighters who respond to 911 calls often start their shift by having their temperatures taken. Many nursing homes even take the temperature of emergency medical personnel before they set foot in the door, even for an urgent call.

Hanan Cohen, director of Community Paramedicine for Empress EMS, the 911 provider for New Rochelle, New York, said they were flooded with a thousand coronavirus-related calls from nursing facilities and private residences in the past two weeks alone. The city of more than 78,000 people is 20 miles north of New York City, in Westchester County.

“Having knowledge helps you better prepare,” he said. “But the reality of it is, since day one in New York, we’ve essentially considered every nursing home response to be a potential covid-level response. They could be anywhere in the infectious process.”