People are crowding into free national parks. And workers are terrified of coronavirus. 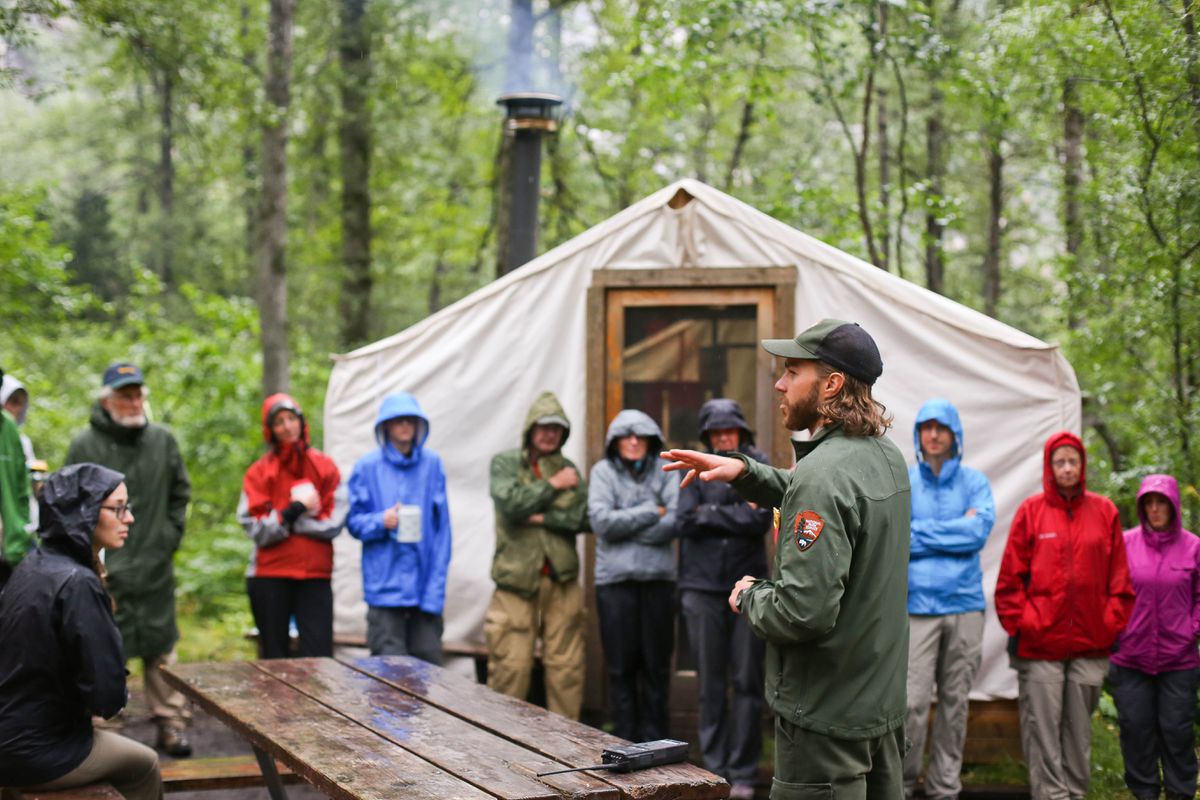 Two days before he cursed a supervisor and quit the National Park Service job he loved, Dustin Stone arrived to work in a foul mood. A decision by Interior Secretary David Bernhardt to keep national park sites open despite the coronavirus outbreak left him angry and in disbelief.

The virus hasn't reached Skagway, a tiny town on the Alaskan panhandle where Stone lives and worked at the Klondike Gold Rush National Historical Park. But if it does, he said, it could be a disaster. "I've lived here year-round through eight flu seasons, and I've seen how quickly an infection can spread," he said. "When one of us gets sick, most of us gets sick." There's no full-time doctor and no hospital in Skagway. A single community health clinic has a registered nurse and assistants.

When it became clear that Klondike Gold Rush would not be among the few sites allowed to close, and would continue hiring seasonal workers from the Lower 48 to come to Skagway for the spring and summer rush of visitors, Stone snapped. He barked a few choice words and stormed out.

As the Centers for Disease Control and Prevention prepared to issue new guidance Thursday about how visitors should behave at more than 300 park sites that remain open, park employees expressed anger and fears about the spread of infection.

After thousands poured into Grand Canyon National Park last weekend, the park's supervisor submitted a request to close it, according to a staffer at the park who spoke on the condition of anonymity for fear of being fired. One park ranger had 600 "close contacts" with visitors in a single day at Bright Angel Trail, the staffer said.

The request was approved by the region that oversees Grand Canyon and supported by both the Navajo Nation and Coconino County, the park staffer said.

"The Navajo Nation is fighting an outbreak of Covid-19 on the Navajo Indian Reservation ...in Arizona, New Mexico and Utah," the nation's president, Jonathan Nez, wrote in a letter to Interior and the Park Service on Tuesday. "We write to request an emergency closure of Grand Canyon National Park."

In a statement, national park spokeswoman Alexandra Picavet said, "No decision has been made . . . about the Grand Canyon NP at this time" but discussions about safety are ongoing. Picavet declined to address the exposure risk cited by the ranger.

With his defiant act a week ago, Stone became the face of National Park Service employees throughout the system who are also angry over Bernhardt’s policy. Stone’s “Ask Me Anything” post on Reddit has racked up more than 1,000 comments.

On the day Stone quit, the administration announced that park entrance fees would be waived so that Americans stuck at home could enjoy the outdoors. Some employees worried that the decision could expose them - and possibly their families - to infection from visitors like those who poured into Zion and Arches national parks last weekend. Fearing for their jobs in an administration that tightly controls speech, no park employee has spoken out as boldly as Stone.

"This is a political game being played with people's lives by leadership at the highest levels of the Department of Interior, and, I believe, the White House," Stone said. "President Trump is the one who announced the fee waiver. I don't think he knows what a national park is. I would be so surprised if Donald Trump ever set foot in a national park."

The National Park Service said in an email that "the health and safety of . . . visitors, employees, volunteers, and partners is our number one priority" and that the service is "taking extraordinary steps to implement the latest guidance from state and local authorities" that promote social distance to slow the spread of the coronavirus.

They are the same basic steps that nearly every American has heard over the past month: "wash your hands often with soap and water for at least 20 seconds; cover your mouth and nose when you cough or sneeze; avoid touching your eyes, nose, and mouth." High-risk visitors, such as the elderly and others with preexisting conditions, are asked to take extra care at parks.

Park officials have temporarily closed or partially shut 100 of the 419 sites in the system, including the Statue of Liberty, Washington Monument, Golden Gate National Recreation Area and Yosemite. On Tuesday, three more were added to the list: Yellowstone, Grand Teton and the Great Smoky Mountains.

"The majority of parks have suspended visitor services," Picavet wrote in the email. "However park rangers remain on duty protecting the parks, and normal rules, and regulations continue to apply."

Those precautions are unlikely to keep visitors from coming into close contact, said a lobbyist for an interest group that works to protect national parks.

"Many parks are designed in a way to move visitors, keep them on trails and keep them on roads," said Kristen Brengel, vice president of government affairs for the National Parks Conservation Association. "Parks inherently funnel people to see overlooks and waterfalls and rivers. People stop at various points to view the wonderful scenery. They're more conducive to people gathering. Parks are built for visitation."

Thousands of people are going into Zion near Las Vegas every day, Brengel said. They gather at one of its more popular lookouts, Angel's Landing, accessed by a demanding hike up a narrow trail. Echoing officials at Interior, Brengel said it's understandable that people want to get outdoors. But the risk of spreading the coronavirus is a steep price for recreation, she said.

"Our concern is that Interior is practicing trial and error instead of being proactive where they know visitors are going to gather," Brengel said. The conservation association asked the administration to close the parks and opposed waiving entrance fees.

Officials don't know if free entry led to more weekend visitors, Picavet said. Among the parks that continue to provide limited access, "we are seeing a variety of fluctuations in visitation," she said. When visitors failed to adhere to public health guidelines, more restrictions were implemented, Picavet said.

Park officials announced Monday that a portion of the Angel's Landing trail was closed due to weekend crowding.

Other parks also acted quickly to address crowding. At Point Reyes National Seashore, near San Francisco, visitors on Saturday descended on beaches and formed queues at trailheads. "It was kind of like watching people waiting for a Broadway play," said Gray Brechin, who hiked a trail that morning. It was closed by the end of the day.

In the nation's capital, access to the cherry blossoms along the Tidal Basin was closed by the Park Service because it was drawing crowds and Washington D.C. Mayor Muriel Bowser, a Democrat, ordered police to block streets to the area.

In an angry letter to the Park Service, provided by the Coalition to Protect America’s National Parks, an employee said restricting access after the fact might come too late for visitors and park personnel.

"Our employees are fearful of bringing this sickness into their homes and threatening the lives of the most high risk among us," the letter said. The coalition said the writer spoke on the condition of anonymity, fearing the loss of his job.

Stone said his colleagues at Klondike Gold Rush grumbled when the park supervisor said he had authority to close portions of the park. Many wanted it to close entirely, he said.

Those who live near national parks - and normally like seeing out-of-towners arrive in droves to boost the local economy - are also worried about an influx of visitors seeking to "socially distance" themselves from others by retreating to wilderness.

"Look to your backyard and recreate there," said Emily Niehaus, mayor of Moab, Utah, who on Wednesday called on nearby Arches and Canyonlands national parks to close down. "Moab will be here when this pandemic is over."

Near some parks, there are already signs of strain.

Outside of Death Valley National Park in the unincorporated town of Beatty, Nevada - population 1,010 - toilet paper and other essentials were picked over at the local Family Dollar. Campgrounds and other attractions there had been closed over the weekend, but visitors still flowed into the area to erect tents and park campers in the adjacent Amargosa Valley to the east of the park.

"It's a higher density than we've ever seen outside the park," said Laura Cunningham, who is worried about the virus taking hold in her town, 70 miles from the nearest hospital.

Last week, officials at Joshua Tree in California had initially indicated the park's roads would be opened to motorists. Hundreds drove from Los Angeles and elsewhere Saturday only to find the gates shut after a last-minute announcement from the park.

Park goers instead packed the sides of the road going to Joshua Tree's western gate, leading locals to text the park superintendent and vent on Facebook and Instagram.

"Nobody has ever seen it like that," said Cody Hanford, who lives just outside the park. "It looked like a musical festival for a second."

The local rural hospital outside Yellowstone was built to meet the needs of a small community of 21,000 that explodes to 75,000 in Teton County's peak season.

“Our health-care system is not designed to support that number of people in a pandemic,” Jackson, Wyoming Mayor Pete Muldoon said. “For the most part, people in Jackson are very concerned about this. We’re going to have to make some hard decisions. The message I’m getting is let’s do what we need to do to stay healthy.”