As Trump signals willingness to break with experts, his base assails top immunologist 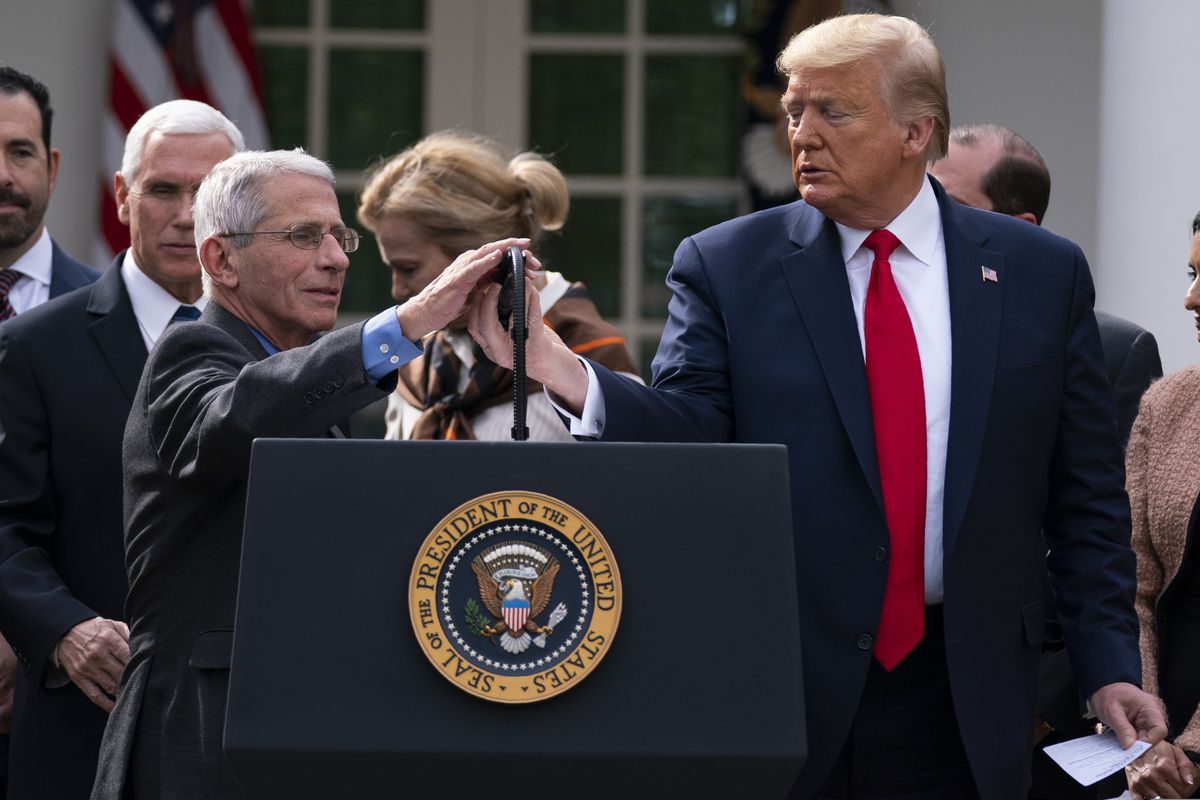 FILE - In this March 13, 2020, file photo Dr. Anthony Fauci, director of the National Institute of Allergy and Infectious Diseases, adjusts the microphone to speak during a news conference on the coronavirus with President Donald Trump in the Rose Garden at the White House in Washington. (AP Photo/Evan Vucci, File)

FILE - In this March 13, 2020, file photo Dr. Anthony Fauci, director of the National Institute of Allergy and Infectious Diseases, adjusts the microphone to speak during a news conference on the coronavirus with President Donald Trump in the Rose Garden at the White House in Washington. (AP Photo/Evan Vucci, File)

A cadre of right-wing news sites pulled from the fringes in recent years through repeated mention by President Donald Trump is now taking aim at Anthony Fauci, the nation’s top infectious diseases expert, who has given interviews in which he has tempered praise for the president with doubts about his pronouncements.

Although both men are seeking to tamp down the appearance of tension — "Great job,” Trump commended the doctor during the White House’s briefing on Tuesday — the president is increasingly chafing against medical consensus. He has found support from a chorus of conservative commentators who have cheered his promise to get the U.S. economy going again as well as his decision to tout possible coronavirus treatments not yet approved by the U.S. Food and Drug Administration.

"The president was right, and frankly Fauci was wrong," Lou Dobbs said Monday on his show on the Fox Business Network, referring to the use of experimental medicine.

Beyond prime-time television, however, the disregard for expert guidance being pushed by some conservative and libertarian voices goes further — aimed not simply at proving Fauci wrong but at painting him as an agent of the “deep state” that Trump has vowed to dismantle. The smear campaign taking root online, and laying the groundwork for Trump to cast aside the experts on his own coronavirus task force, relies centrally on the idea that there is no expertise that rises above partisanship, and that everyone has an agenda.

Fauci, an immunologist who graduated first in his class from Cornell's medical school, has been the director of the National Institute of Allergy and Infectious Diseases since 1984. Between 1983 and 2002, he was the 13th most-cited scientist among the 2.5 million to 3 million authors worldwide and across all disciplines publishing in scientific journals, according to the Institute for Scientific Information.

Peter Barry Chowka, whose Twitter bio boasts that he has been retweeted by the president, recently referred to Fauci, who has advised multiple presidents of both parties, as a "Deep-State Hillary Clinton-loving stooge." Trump has not brought these attacks to his own Twitter feed, but he has surfaced previous pieces by Chowka, including praise for Sean Hannity of Fox News.

And the false caricature of Fauci has been embraced in some of the most avowedly pro-Trump corners of the internet — places that seem remote from mainstream discourse until they wind up in presidential tweets or in a monologue on Fox.

"Cross-pollination" between fringe sites and more credible conservative outlets occurs on news aggregators such as the Drudge Report, said Carl Cameron, who spent more than two decades as a reporter for Fox News before leaving in 2017.

"These attacks do seem to get attention from the hosts at Fox," he said.

Already the Pew Research Center has documented a remarkable divergence of views about the coronavirus outbreak based on news consumption. Nearly two-thirds of Republicans who turn to sources that cater to right-leaning audiences said that news outlets have greatly exaggerated the pandemic, while 42 percent of Republicans who don't follow such sources said the same.

The attempt to discredit Fauci draws on a resource for which Trump has professed his “love” — WikiLeaks. Among the emails hacked by Russian agents and released by the anti-secrecy organization in 2016 was a message Fauci sent in 2013 to one of Clinton’s top aides, Cheryl Mills. He praised the secretary of state’s “stamina and capability” during her testimony before the congressional committee investigating the 2012 attacks in Benghazi, Libya.

At the end of last week, the right-wing website Gateway Pundit cited the email, saying it came as "no surprise" because the doctor was also encouraging states to adopt restrictive measures that were "crashing their economies" and playing down hopes for possible coronavirus treatments. Jim Hoft, the site's editor, published additional articles questioning Fauci's approach to past health emergencies and chiding him for his "disrespectful interview undermining President Trump."

In an email, Hoft said, "I don't have a problem with more information being shared about the doctor."

The same hacked email was the centerpiece of Chowka's piece, which appeared over the weekend on the conservative blog American Thinker.

"So Fauci's a typical, deeply embedded administrative state hack who can be expected to be obsequious to his political bosses like Mrs. Clinton," Chowka wrote, going on to accuse the infectious diseases expert of contradicting and undermining Trump.

The appearance of tension between the president and the doctor caused Fauci, in a radio interview on Tuesday, to say that "pitting one against the other is just not helpful." Trump also took steps to present a united front, saying their relationship has been "very good."

Followers of the American Thinker have not received the message. Chowka’s piece has generated nearly 20,000 interactions on Facebook alone — more than the typical well-performing story in the mainstream media. It has gained particular traction in Facebook groups devoted to Fox News personalities, suggesting an overlapping audience, as well as in state-specific groups, such as Maine for Trump 2020 and New York for Trump. In a group for Massachusetts-based supporters of the president, one user wrote, “Never liked or trusted this person.”

Separately, a meme has been spreading in pro-Trump groups that shows an image of Fauci with his arm around House Speaker Nancy Pelosi, D-Calif., and the question, "Look trustworthy to you?"

The attacks have spread to other right-wing sites, where Fauci stands accused of trying to turn the United States into "a police state like China in order to stop coronavirus."

Some of the most prominent conservative influencers, including Tom Fitton of Judicial Watch and Bill Mitchell of "YourVoice America," have been amplifying the conspiracy theories to their hundreds of thousands of followers on Twitter. Both figures have been retweeted by the president, Fitton as many as 100 times.

Meanwhile, at least two congressional candidates have participated in the smear campaign. Also spreading specious claims about Fauci is a highly active account on Twitter that has been featured by the One America News Network (OANN), a right-wing channel favored by the president that gained a seat in the White House briefing room in 2017. The account, which uses the name Greg Rubini, distorted 2017 comments from Fauci warning that the Trump administration would confront challenges from infectious diseases to claim that the doctor "made" and "funded" the novel virus.

Last week, in spreading unsubstantiated claims about the origins of the virus, Chanel Rion, an OANN reporter and former political illustrator for "anti-left caucuses" who accused the news media of spreading "Chinese Communist Party narratives," cited "Greg Rubini, a citizen investigator and a monitored source amongst a certain set in the D.C. intelligence community."

The same account was involved in circulating the purported name of the whistleblower in the Ukraine scandal last fall.

The claims don't have buy-in from the Republican mainstream. But attempts to parry them have only illustrated their reach.

Over the weekend, Matt Whitlock, a senior adviser to the National Republican Senatorial Committee, wrote on Twitter, "Shouldn't need to be said, but I personally couldn't care less if Dr. Fauci said nice things to say about Hillary Clinton."

The "politicization of public health" means it very much does need to be said, according to Robert Faris, the research director at Harvard's Berkman Klein Center for Internet & Society.

"Having Trump and Fauci on the same public stage at the same time is an untenable position for right-wing media," he said. "Something's got to give, and I don't know what it is."

The most reliable avenues these outlets have for mainstream exposure, Faris said, is to seed their talking points into Fox News coverage or to get the direct attention of White House aides.

“They’re both plausible, though, thankfully, we don’t seem to be there yet,” he added.