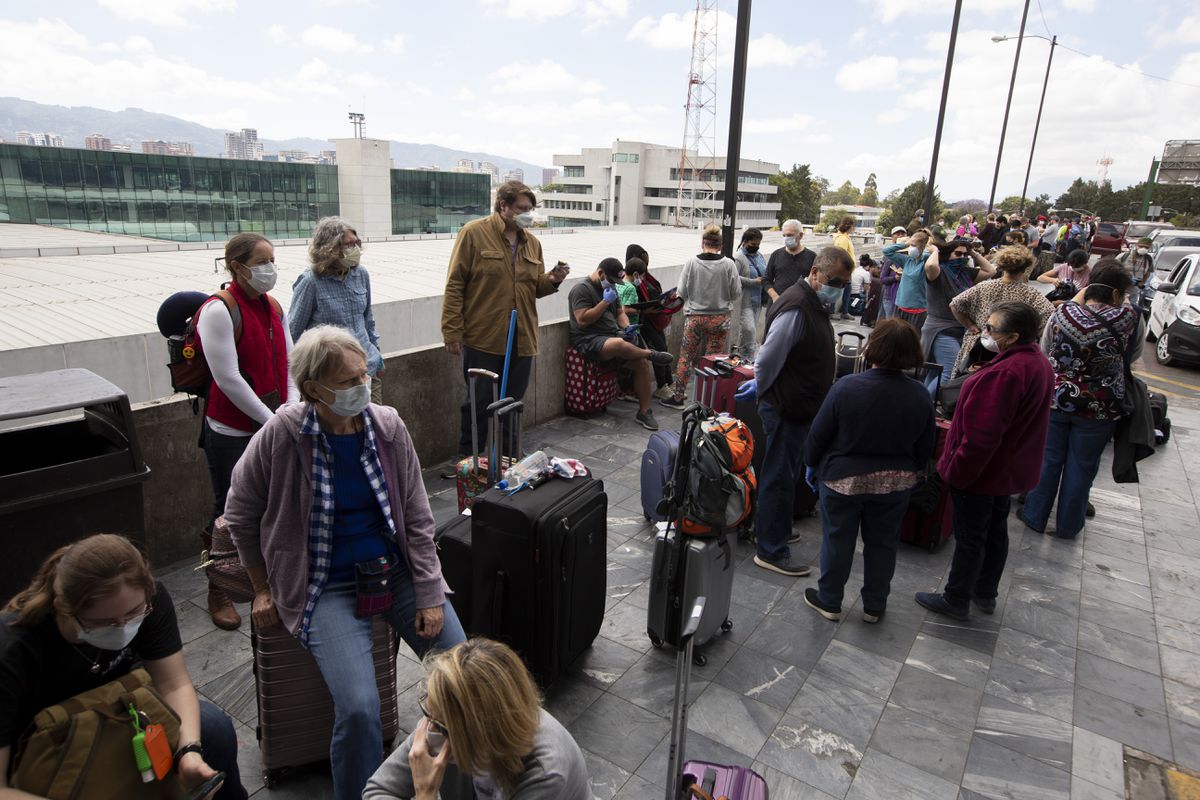 Travelers wait to take a charter flight coordinated by the U.S. embassy at La Aurora airport in Guatemala City, Monday, March 23, 2020. American citizens stranded abroad because of the coronavirus pandemic are seeking help in returning to the United States. (AP Photo/Moises Castillo)

Travelers wait to take a charter flight coordinated by the U.S. embassy at La Aurora airport in Guatemala City, Monday, March 23, 2020. American citizens stranded abroad because of the coronavirus pandemic are seeking help in returning to the United States. (AP Photo/Moises Castillo)

WASHINGTON - Faced with a rising number of complaints from Americans stranded abroad, State Department officials tried to quell those concerns last Sunday in a conference call with Senate staffers speaking on behalf of their anxious and exasperated constituents.

The officials opened the conversation with a breakdown of U.S. efforts to bring Americans home, but once the call turned to questions, the conversation grew tense, according to several aides present for the call and audio reviewed by The Washington Post.

At one point, a senior State Department official referred to Guatemala when asked about Peru. Republican and Democratic staffers complained that a website set up for travelers did not work, leaving constituents unsure if their information had even been received.

Some staffers said the information they received from embassies contradicted what State Department officials in Washington had told them. Repeatedly, staffers raised concerns about constituents stuck in South America, only to be told the department was still working out evacuation plans. When a senator asked about Americans in Zambia, the State Department said it was tracking no one there.

"It wouldn't be accurate to say there's been a lack of response from the State Department. Instead, it's more a matter of a lack of specific information either to our office or, more importantly, directly to constituents in the various countries," said a spokeswoman for Sen. Lisa Murkowski, R-Alaska.

[US tourists stranded abroad desperate as they try to return]

The effort to bring Americans home has created a rare unity of purpose among Democrats and Republicans in Congress who have been flooded with phone calls from desperate constituents - more than 50,000 still seeking help, according to the U.S. government.

Lawmakers in both parties acknowledged that the department has made significant improvements in recent days in coordinating with local governments, working around arcane travel regulations and arranging chartered flights for thousands of Americans stranded abroad during an unparalleled situation. In many cases, senators and aides say, they understand that the State Department is doing all it can. Several spoke on the condition of anonymity in order to freely discuss internal government discussions.

But interviews with more than a dozen senators, aides and American travelers show there are widespread frustrations with the process of getting U.S. citizens home.

Critics include a broad array of bipartisan senators, from Republican Sens. Marco Rubio of Florida and Murkowski to Democratic Sens. Mark Warner of Virginia and Chris Murphy of Connecticut. More than a dozen Republican senators recently requested a call with Secretary of State Mike Pompeo to discuss the concerns, records reviewed by The Post show.

Some have gone to unusual lengths. For example, Sen. Josh Hawley, R-Mo.. called the White House and spoke to President Donald Trump directly after feeling stymied at the State Department, a GOP aide said.

Defenders of the department say it has performed scrappily in the face of a historic and global crisis, helping evacuate more than 15,000 Americans from more than 40 countries since January and arranging the return of thousands more Americans by chartered aircraft every day. They also point out that other governments, such as Peru, were slow to approve the charter flights necessary to scoop up stranded Americans.

"Our teams, working around the clock in Washington and overseas, will bring home thousands more in the coming days, from every region of the world," State Department spokesperson Morgan Ortagus said.

The department has dedicated more diplomats to the effort. This month, routine visa services were suspended, and diplomats who returned to Washington due to specific vulnerabilities related to the covid-19 epidemic were reassigned to American Citizen Services, or "ACS."

In Peru, where thousands of Americans have been stranded, State Department officials converted a hangar used for counternarcotics operations into an ad hoc processing center for evacuations. Several congressional offices reached out to The Post to praise the State Department after U.S. officials notified them of the impending story.

"I can't thank the State Department professionals enough for their tireless efforts to help us reunite families and get our citizens back home," said House Minority Whip Steve Scalise, R-La., adding that over the last two weeks, 20 U.S. citizens from southeast Louisiana were returned home, including two nurses stuck in Guatemala.

Another senior Republican, Rep. Michael McCaul of Texas, also complimented the department for "working around the clock."

Still, tens of thousands of Americans have notified U.S. embassies they need help, and many from South Africa to Peru to Morocco have complained on social media that they are running out of money and medicine, and that other nations are working faster to organize charter flights. A flurry of new hashtags and Facebook groups have emerged with names including "Stay Strong, Quarantine On."

One evacuation flight out of Peru this week had scores of empty seats because a lag in communication between the Peruvian and U.S. governments didn't provide Americans enough time to get to the airport in time, U.S. officials said.

Warner, the Virginia Democrat, said more than 100 of his constituents remained stuck in Algeria, Kenya, Saudi Arabia, India, Samoa, Ghana, the Philippines and Peru. Many of them, he said, are in remote areas where there are curfews and lockdowns.

Dylan Cooper said his father and mother, ages 78 and 76, respectively, who are from Maine, are stuck in Honduras, where they have done volunteer work for years. Cooper said communication with the U.S. Embassy there has been mostly useless.

"My father has complained that it has mostly been too late and with too little detail to be useful," he said. "For example, one United Airlines flight was announced for March 26. By the time that he received the email saying that United was considering flights, it was already fully booked."

Fred Warkentine, a doctor who was recently evacuated to Kentucky after an intervention from Senate Majority Leader Mitch McConnell, R-Ky., told local news outlets that the State Department did very little for him. He did not return a request for comment from The Post.

"As the number of cases in Peru increased, the senator grew frustrated with the lack of action from the State Department," a spokesperson with Rubio's office said. "The individual manning the Peru desk has been 'tracking' this issue for a week, but doing nothing and the ambassador essentially abandoned the post to return to Washington. The senator made his frustration known directly to the State Department."

The embassy put out a statement saying the U.S. ambassador, Krishna Urs, left the country on March 20 due to medical concerns but continued working with the Peruvian government remotely to address the evacuation crisis.

Other senators have laid the blame at Pompeo, who they say has been impossible to reach during the ordeal. When the Republican senators requested a formal call with him to discuss their problems, they were instead routed to two of his deputies, according to records reviewed by The Post. New Jersey Sen. Robert Menendez, the top Democrat on the Senate Foreign Relations Committee, has struggled to get Pompeo on the phone, people familiar with the matter say.

On the Sunday call, Jessica Lewis, the chief staff member for the Foreign Relations Committee, said lawmakers appreciated the help now but that "State came way late to this game, and people simply are not getting the information they need."

"While the scale of the pandemic may not have been entirely predictable, if this administration, including Secretary Pompeo and his senior leadership team, had taken the coronavirus threat seriously and planned ahead, we may have been able to avoid some of the confusion and chaos Americans abroad encountered in their efforts to return home," Menendez said in a statement.

The State Department has urged citizens abroad to enter their information into its "STEP" website to receive updates on evacuation planning in their specific country, but people have complained that the site is not responsive.

When asked about problems with the site, a senior State Department official said that "yes, we recognize it's an issue."

The official said the site had worked for him when he tried to register for a trip to Peru, but when his colleague tried the same thing, it didn't work because he "didn't quite get the data put in correct."

"So sometimes it's a question of operator error. Other times it can be a question of the system getting overloaded," the official conceded.

On the call, some staffers said they were also frustrated with an email system employed by the State Department that repeatedly did not work.

"We get undeliverable bouncebacks," a senior staffer to Sen. Robert Casey Jr., D-Pa., said on the Sunday call. The officials said they would try to fix it.

At times, the communication has been confusing, according to aides and records reviewed by The Post. One email from the State Department, titled "Peru flight delays," said the U.S. government was still looking for permission from the Peruvian government to land planes but had accidentally communicated with some of the wrong people.

"U.S. Citizens in Peru may have received Embassy notification that today's flights from Peru to the United States have been delayed. We understand this may have caused some confusion as not everyone who received the message was manifested on one of the planned flights," the State Department email said.

Warner and other senators conceded that in many cases, governments had refused "to work with U.S. officials to help get them home," he said. "But in a lot of cases, the State Department was simply unprepared and understaffed for the massive logistical challenges of telling thousands of Americans to come back immediately."

Sen. Chris Murphy, the Connecticut Democrat, said that in Peru, the government was not processing passengers quickly and that it was proving near impossible to get charter flights into the country.

He urged Trump and Pompeo to work the phones, saying it would take a high-level intervention to change the policy, and that many of the State Department "implementers" were doing the best job they could.

“Peru is an ally. They aren’t an adversary. I’m sure they’d be flattered by a call from the president of the United States,” he said. “It just seems there has been no directive from the top to get this done quickly.”