Governors frustrated with Trump offer to be states’ ‘backup’ 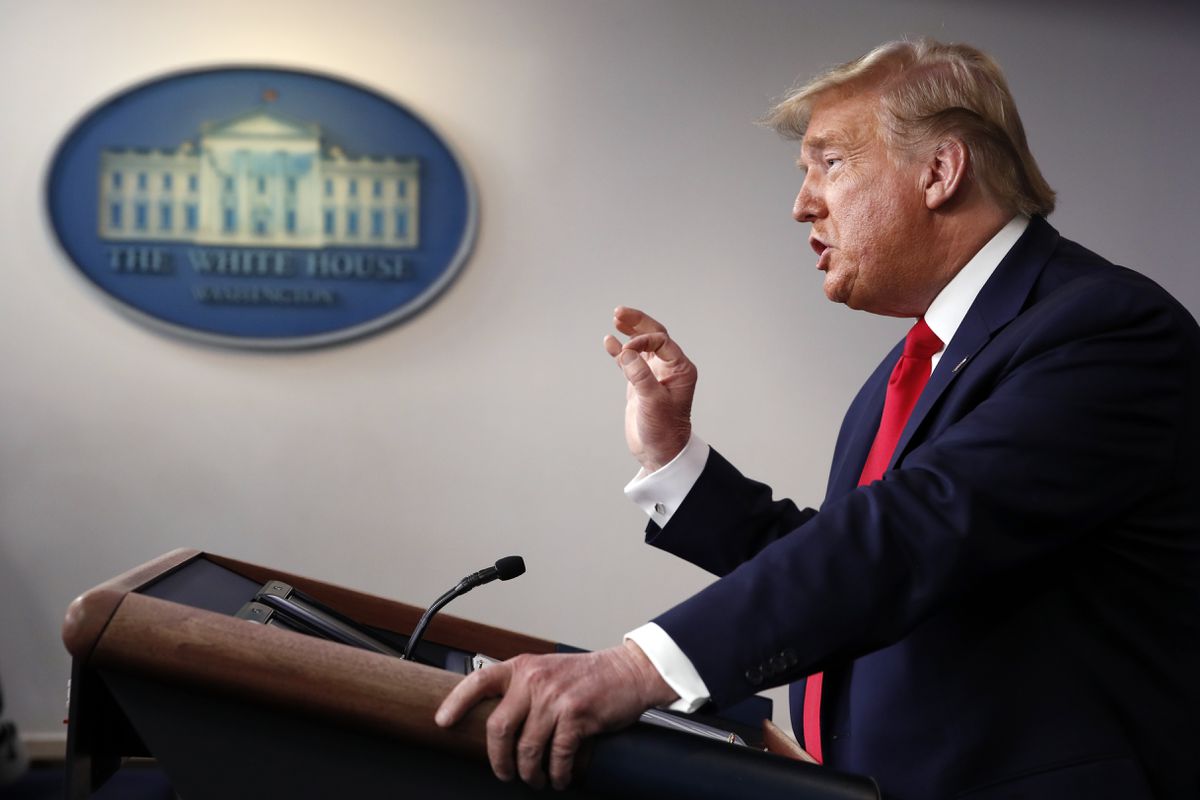 Tensions between President Donald Trump and governors from states hit hardest by the coronavirus pandemic are rising at a time when the White House is pushing to loosen restrictions on social distancing in parts of the country due to concerns that they are hurting the economy.

Trump insisted Thursday that Americans are eager to "go back to work" and advised the governors in a letter that his administration is developing new guidelines that will categorize the risk level for each county in the nation - potentially laying the groundwork for less-affected areas to relax some of the strictest measures.

But the president's upbeat assessment conflicts with warnings from public health experts that abandoning current restrictions too soon could be potentially catastrophic. And his posture has distressed the leaders in states where the virus is spreading exponentially - overwhelming hospitals, exhausting medical supply stockpiles and ravaging communities.

On Thursday, Washington Gov. Jay Inslee, a Democrat, pleaded with Trump during a conference call with the governors to take more dramatic federal action to secure medical supplies for his state, one of the hardest hit, according to four people familiar with the call.

After Trump told the group that his administration was ready to be the "backup" for states in crisis, Inslee interjected: "We don't need a backup. We need a Tom Brady," a reference to the Super Bowl-winning quarterback who has been friendly with the president, said those familiar with the exchange, who like others spoke on the condition of anonymity to describe the private conference call.

Inslee called on Trump to use the Defense Production Act to order private companies to produce items such as masks and ventilators, a step the president has resisted after announcing last week he would invoke the federal law. Inslee, citing the dire situation at Washington state's nursing homes, called on the Pentagon to press defense companies to produce lifesaving materials.

Trump responded defensively, two of the people said, and told Inslee that he and the federal government have already done much for Washington and other states in recent days, ticking off several initiatives.

"The President is using the DPA everyday as quiet leverage to enhance what is already the greatest mobilization of America's industrial base since World War II," White House trade adviser Peter Navarro said in a statement Thursday evening.

"These private enterprises are eager to assist and have said "yes" to helping the country at every turn, so DPA hasn't been needed yet."Navarro added that "at the President's direction, Seattle has received considerable inventory."

Speaking to reporters in Washington after the call, Inslee said of the discussion with Trump, "I am not going to go into great detail, but I will say that I told them that the states should not be competing against each other. We are grateful for their assistance in what they have provided so far."

Though the president has faced mounting bipartisan calls to use his powers to compel private companies to help, he has said he is employing the law as leverage to win voluntary cooperation. His campaign on Thursday tweeted a list of major corporations, including 3M, that have said they will increase production of such supplies.

Behind the scenes, business leaders have lobbied Trump not to invoke the law and conservative advisers have warned the president that doing so would draw a backlash and could cut into his argument of running against socialism in the fall, said two administration officials.

On Thursday, a union leader representing health-care workers, Lee Saunders, said the impossible situation has already occurred, noting that some health workers in New York have donned garbage bags because hospitals are short of protective gowns.

"This is a train wreck happening in slow motion right before our eyes," Saunders told reporters. "Do the moral thing, Mr. President: Get those nurses and health-care workers the protective gear they need by invoking the Defense Production Act."

At a White House news briefing, Trump called reports of tension on his call with the governors "fake news," insisting that Brady's name was raised "in a positive way." The president, after denouncing the media, asserted that the call was not contentious.

"I would say one person - a little, tiny bit of a raising of a voice, a wise guy a little bit," Trump said, without identifying the governor. "But he's usually a big wise guy - not so much anymore. We saw to it he wouldn't be anymore."

As news broke that jobless claims had surged by 3.28 million in a week - by far the largest weekly increase in history - the president reiterated his desire to restart segments of the economy that have been virtually shuttered. He has cited Easter weekend, just three weeks away, as a target date, though medical experts have said the virus is still spreading rapidly and that doing so could severely undermine efforts to "flatten the curve" of infections and provide relief to hospitals.

"People want to go back to work," Trump said. "I'm hearing it loud and clear from everybody. We have to go back. This is the United States of America. They don't want to sit around and wait. . . . It's going to happen pretty quick. We may take large sections of our country that are not so affected and do it that way."

It remains unclear exactly how the system of county risk levels announced by Trump on Thursday would work.

Deborah Birx, the White House's coronavirus response coordinator, said many states have been collecting the data needed to make determinations and that the Centers for Disease Control and Prevention would play a major role.

When asked how the government would stop people from high-risk areas from using businesses reopened in low-risk counties, she said much of those decisions would be left to local officials and the hope is that residents would continue to use good judgment when it comes to helping stop the spread of the virus.

"Part of this will be the need to have highly responsible behavior between counties," she said. "And I think the American people can understand that, that they will understand where the virus is, because we'll have the testing data, and where it isn't, and make sure that they are taking appropriate precautions as they moved in and out of spaces."

She expressed confidence that the government could determine the risk levels of counties, saying that this type of geographic "laserlike" focus is already being done in sub-Saharan Africa to combat the spread of HIV.

The White House has highlighted its 15-day social distancing campaign that is set to expire Monday as its premier effort to combat the pandemic.

Vice President Mike Pence told reporters that the task force would present Trump with a range of recommendations for additional guidance this weekend so that he can determine what social distancing guidelines should be provided going forward.

Trump has sought to present himself to the public as responding proactively to the crisis, after initially having dismissed the threat from the pathogen that has infected more than 80,000 and killed more than 1,000 in the United States. The White House said Trump will travel to Norfolk on Saturday to help send off the USNS Comfort, a naval floating hospital vessel that the administration is dispatching to assist New York, one of the states hit hardest.

But on the front lines, where medical workers are lacking protective equipment and emergency rooms are being overrun, the Trump administration is letting states take the lead. Pence said that the Federal Emergency Management Agency was coordinating with the states, but that the approach to the outbreak is "locally executed, state managed and federally supported."

Inslee was not the only governor to sound the alarm, according to one person briefed on the call, with Louisiana Gov. John Bel Edwards, a Democrat, raising a range of issues as New Orleans and his state brace for turmoil, with the number of cases and deaths there rising.

Maryland Gov. Larry Hogan, a Republican, spoke first for the governors on the call as head of the National Governors Association. He made a plea for Maryland, Virginia and Washington, D.C., to get their own testing facility since the region is home to much of the workforce that keeps the federal government running, according to people familiar with the call. A White House official said that was in the works.

District of Columbia Mayor Muriel Bowser, a Democrat, voiced objection to the federal relief package that treats the District as a territory, the people familiar said. Virginia Gov. Ralph Northam, a Democrat, a physician, asked Birx for her best- and worst-case scenarios. She said she was still looking at modeling, people familiar with the call said.

The personal protective equipment shortage for health-care workers was the biggest concern expressed by governors, who said they believed the country needed a federal response so states are not competing for medical supplies - a running theme of the discussion, according to the people on the call and briefed on it.

Other moments of note included when Gov. Jim Justice of West Virginia, a Republican, voiced concern about nursing home cases, the people familiar said. Meanwhile, Gov. Henry McMaster, R-S.C., a Trump ally, told the president that small businesses cannot sustain too much more of the economic shutdown, aides familiar with the call said.

And Mississippi Gov. Tate Reeves, a Republican, told the president he appreciated Trump's understanding that some areas are less affected by the virus and could potentially restart sectors of their economy, people familiar with the call said.

Trump referred to the situation as "crazy" and emphasized that the country has got to get back open for business, the people familiar said.