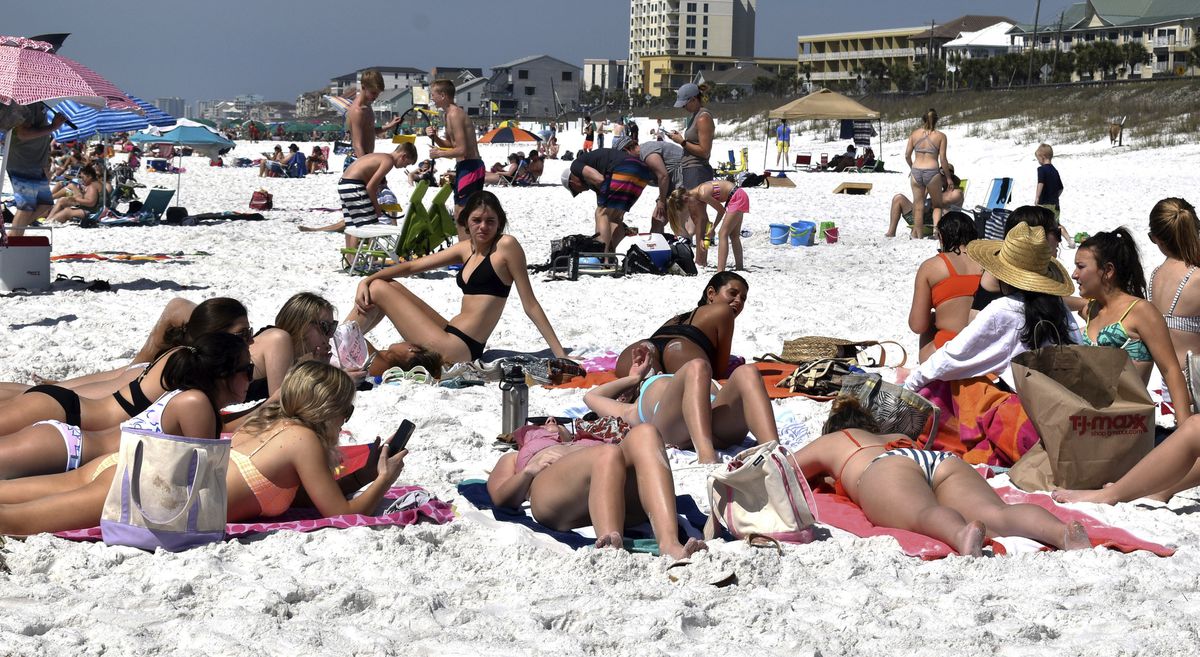 Students from Clemson University lie on the beach during spring break near Pompano Joe's Restaurant in Miramar Beach near Destin, Fla., on Monday, March 16, 2020. Speaking about the coronavirus, Ellis Turner said, "I feel safer here than at school," noting they live in a residential hall at school where everybody is touching the same stuff. (Tina Harbuck/Northwest Florida Daily News via AP)

Students from Clemson University lie on the beach during spring break near Pompano Joe's Restaurant in Miramar Beach near Destin, Fla., on Monday, March 16, 2020. Speaking about the coronavirus, Ellis Turner said, "I feel safer here than at school," noting they live in a residential hall at school where everybody is touching the same stuff. (Tina Harbuck/Northwest Florida Daily News via AP)

As stores and offices closed throughout March, many people watched with anger as thousands of college students poured into tropical locales, crowding beaches and bars to party during their regularly scheduled spring breaks.

Now, as the pandemic has spread further, many people's fears have been realized as college students by the dozen have tested positive for covid-19, the disease caused by the novel coronavirus.

About 70 students from the University of Texas at Austin, all in their 20s, chartered a plane to Cabo San Lucas, Mexico, in late March. They took the trip despite public health advice to avoid crowding as well as nonessential air travel.

On Tuesday, Austin public health officials announced 28 students, more than a third of the young people who took the trip, had returned and tested positive for the coronavirus. Many of the remaining students are under public health monitoring, according to officials.

For public officials who have repeatedly told people to stay home, the news was frustrating.

"Quit being an a--," Texas House Speaker Dennis Bonnen (R) told KXAN. "Get over yourselves. Whether you think this is an issue or not, it is. Whether you think it could affect you or not, it does. The reality of it is, if I'm a college kid who's going to spring break in Mexico, you're affecting a lot of people. Grow up."

Despite early reports the coronavirus would largely spare the young, dozens of spring breakers have returned to their college towns in places like Texas, Florida and Wisconsin and tested positive for it.

At least five students from the University of Tampa who went on spring-break trips together tested positive for the coronavirus last month after Florida officials faced intense scrutiny over their decision to keep beaches and bars open while spring breakers poured into the state.

At the University of Wisconsin at Madison, multiple students tested positive after developing symptoms since returning from a spring-break romp in Nashville and Gulf Shores, Alabama, WKRG reported.

"If I get corona, I get corona" was the unofficial rallying cry of thousands of young adults who viewed the government's social distancing guidelines as a draconian overreaction to the coronavirus pandemic, which exploded from fewer than 100 cases nationwide on March 1 to more than 180,000 by the end of the month.

But some of those young people have since expressed regret.

"Life is precious," wrote Brady Sluder, the spring breaker from Ohio who said he would not let a global pandemic stop him from partying. "Don't be arrogant and think you're invincible like myself."

Although most of the serious cases of covid-19 occur in older people and those with underlying health conditions, young and otherwise healthy adults have also been hospitalized with the coronavirus.

In Travis County, Texas, home of UT-Austin, nearly half of the coronavirus-related hospitalizations involved people between the ages of 20 and 40, public health officials said.

Young people have accounted for a significant number of coronavirus hospitalizations nationwide. While deaths are concentrated among older adults, some counties have reported fatalities among young people and even children.

"The virus often hides in the healthy and is given to those who are at grave risk of being hospitalized or dying," Austin-Travis County Interim Health Authority Director Mark Escott said in a statement. "While younger people have less risk for complications, they are not immune from severe illness and death from covid-19."

Even more concerning for many officials is the risk to older Americans posed by infected young people, who may not show severe symptoms.