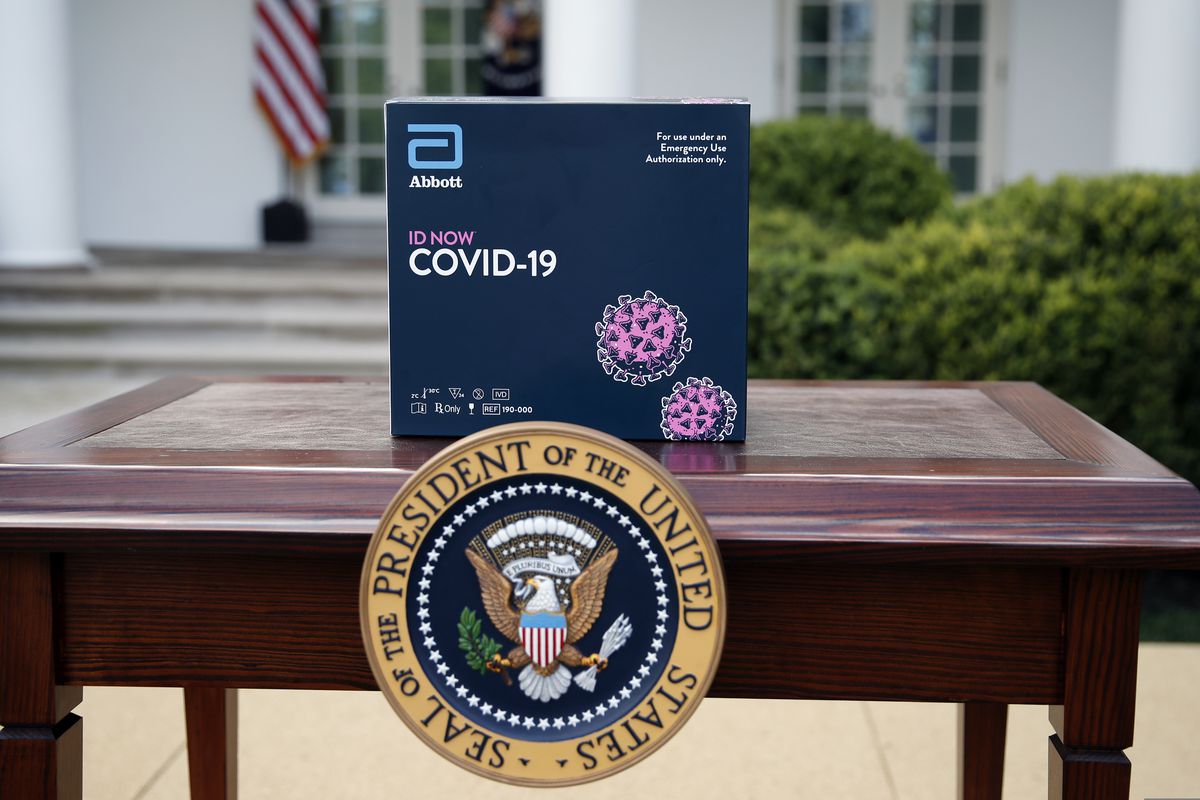 A 5-minute test kit for COVID-19 developed by Abbott Laboratories sits on a table ahead of a briefing by President Donald Trump about the coronavirus in the Rose Garden of the White House, Monday, March 30, 2020, in Washington. (AP Photo/Alex Brandon)

A 5-minute test kit for COVID-19 developed by Abbott Laboratories sits on a table ahead of a briefing by President Donald Trump about the coronavirus in the Rose Garden of the White House, Monday, March 30, 2020, in Washington. (AP Photo/Alex Brandon)

WASHINGTON — As Abbott Laboratories began shipping its new rapid-response tests across the country Wednesday, a new flashpoint emerged in the nation’s handling of the pandemic: where to ship the covid-19 diagnostics that could be one of the most effective tools in combating the outbreak.

Some White House officials want to ship many of the tests, which were approved Friday and can deliver results in five to 13 minutes, to areas where there are fewer cases, such as rural areas and parts of the South. But officials in hard-hit areas and some public health experts favor directing them to the outbreak's current hot spots, arguing that delays in test readings have sidelined many first responders and health care workers and made it harder to isolate the most contagious patients.

During a Tuesday meeting of the White House coronavirus task force in the Situation Room, Vice President Mike Pence and other officials discussed diverting new tests to areas where there are relatively few cases, according to two individuals familiar with the matter who spoke on the condition of anonymity to describe internal deliberations.

They said the administration needs "to figure out the spread in places where we don't quite understand it now," according to one of the individuals present. The final consensus seemed to be, "Let's send it to the South and low-density areas."

The lag in delivering test results is taking a toll on communities across the country, depriving them of workers who can respond to medical emergencies and sowing uncertainty among hospital officials deciding what precautions to take. The competition for machines is so intense that governors and mayors have begun personally calling Abbott executives to negotiate orders.

In beleaguered Detroit, which now has one of the nation’s highest rates of infection and one of the fastest-rising death tolls, Mayor Mike Duggan said Wednesday that he secured the cellphone number of Miles White — the chairman and outgoing chief executive of Abbott Labs — and woke him up Sunday morning to beg for the test, because he knew the whole country would be calling. He said the fact that he struck a deal for five machines and 5,000 kits would be a “game changer,” allowing firefighters, police and nurses to get back on the job and out of quarantine.

Atop the shuttered Greektown Hotel in the city's casino district, where some police officers have begun staying overnight this week to avoid the risk of infecting their own families, the message "#DETROITSTRONG" blazes night and day.

Five-hundred-twenty-five officers in Detroit's police force of more than 2,500 officers are quarantined, according to spokeswoman Sgt. Nicole Kirkwood. Eighty-five members are expected to return to work by the end of this week, she said, and 91 have tested positive.

Rep. Debbie Dingell, D-Mich., whose district includes the neighboring city of Dearborn, said in a phone interview Tuesday that some of her constituents are waiting as long as two weeks to get results from tests sent out of state and to private companies.

"You need to know whether it's safe for someone to go out, and we need to keep them safe as well," Dingell said, adding that local police and fire chiefs are struggling to deal with employees who are isolating themselves while they await test results.

"We can't afford to wait for another week," one wrote her.

Abbott spokesman John Koval, whose firm started shipping 50,000 tests per day on Wednesday, said, "We're working with the administration to deploy them where they will have the greatest impact." He would not elaborate, but said states across the country had already begun to receive and use them.

Maryland Gov. Larry Hogan, a Republican, said in an interview that his state needs at least 100,000 more tests than it has.

"We've talked to Abbott. They're shortly supposed to have a small amount of testing machines out to the states. No governor in America has received any yet," Hogan said. "They've said they are available. They are not yet available. They say, 'Get on the phone, governors can get all these things.' I just got off the phone with all the governors, no governors have these things."

Public health experts say tests are needed everywhere — as much as several hundred thousand a day. “Hot zones need them the most,” said Harlan Krumholz, a cardiologist at Yale University’s medical school and director of the Yale New Haven Hospital Center for Outcomes Research and Evaluation, “but everyone needs them.”

Joshua Sharfstein, former Maryland health commissioner and now a professor at the Bloomberg School of Public Health at Johns Hopkins University, said any decisions to send them to the South "instead of to hot spots like that would have to be part of a plan with a scientific rationale. And I haven't seen one at this point."

In Kentucky, Gov. Andy Beshear, a Democrat, has delayed launching mobile testing sites, partly because he doesn't have an adequate supply of tests and personal protective equipment. But he noted in a news conference Tuesday that the turnaround time for tests matters as well, since officials are trying to ensure that they have access to a lab outside the state that "can turn it around in enough time to where it can be helpful. We'd like to get reports back in 48 hours."

In California, the backlog for getting test results is staggering. While about 86,100 tests had been conducted as of March 30, about 28,704 results had been delivered and another 57,400 were pending. The numbers include data California has received from commercial, private and academic labs, including Quest Diagnostics, LabCorp, Kaiser, the University of California, Stanford University, and 22 state and county health labs.

Even though widely used test analyses take four hours, shortages of the large costly machines used for those analyses have caused bottlenecks, forcing patients to wait four or more days for test results.

On March 18, as the pandemic deepened, the American Clinical Laboratory Association appealed in vain to congressional leaders to include $5 billion in legislation to help private laboratories meet growing demand for tests and analysis. Some test providers feared that Medicaid might reimburse a fraction of costs. And the laboratory companies are already hurting from a drop in other business. Quest, in a Securities and Exchange Commission filing Tuesday said it had suffered a 40% drop in overall volume during the last two weeks of March, even after including testing for covid-19, the disease caused by the novel coronavirus.

There are now more than a dozen major players in the testing world. The Centers for Disease Control and Prevention has its own labs, but on Feb. 29 it appealed to hospitals and private companies for help. Since then, private companies have churned out as many as 84,000 tests daily, and have accounted for about three-quarters of the 1,064,506 tests completed as of April 1.

The biggest companies that have jumped into covid-19 testing include Roche, Labcorp, and Quest, established names in laboratory analysis. They have ramped up quickl. LabCorp, for example, has the ability to perform more than 20,000 coronavirus tests per day, and has performed more than 250,000 tests overall since the company first began testing for covid-19 on March 5. Quest said on March 24 that its capacity would soon reach 30,000. But it still takes either company routinely four to five days to release test results to health-care providers.

"This timeframe can vary based on demand, the length of time to transport the specimen to LabCorp's test facilities, and the prioritization of patients (as defined by healthcare authorities and the White House Coronavirus Task Force, HHS and other health authorities)," Labcorp said in a statement, referring to the Health and Human Services Department.

Scott Becker, a spokesman for the Association of Public Health Laboratories, said in an email that delays of results are pervasive across private and public labs.

"These backlogs are system-wide issues that point to supply shortages, equipment shortages and shortages of qualified staff," he said. "These tests aren't like a simple blood test, they are deemed highly complex tests that require skilled scientific staff."

The new Abbott test involves putting a sample from a nasal swab in a 6.6-pound toaster-size device, which will give results back in five to 13 minutes. The new test will be used only in medical facilities. The company says it will provide 50,000 of the testing kits a day and has distributed 18,000 of the analytical devices.

For primary care physicians, Abbott's technology is largely out of reach. Gary Bergman, senior physician at Children's Medical Associates of Northern Virginia, said in a phone interview Wednesday that he and his partners looked into buying one of the firm's machines, but it would cost between $12,000 and $15,000, and they couldn't say how many covid-19 tests they could supply or what they would cost.

“It doesn’t pay. It’s not practical,” said Bergman, who continue to see sick children and newborns even though business has dipped by two-thirds.