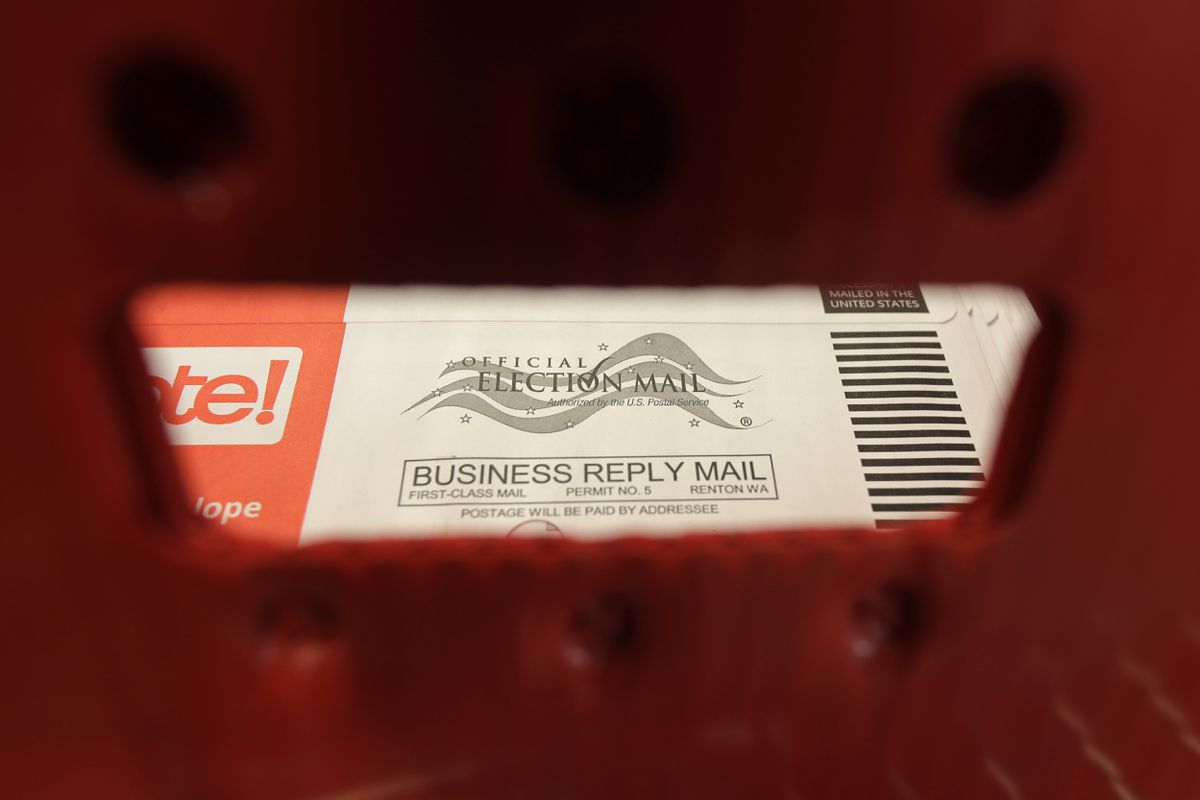 FILE - In this March 10, 2020, file photo a box of ballots mailed in for the Washington state primary election are shown at the King County Elections headquarters in Renton, Wash. With another economic rescue package in the works, House Speaker Nancy Pelosi says she wants money to give more voters the chance to cast their ballots by mail, an option that would allow people to cast a ballot but without the concern over polling places. (AP Photo/Ted S. Warren, File)

FILE - In this March 10, 2020, file photo a box of ballots mailed in for the Washington state primary election are shown at the King County Elections headquarters in Renton, Wash. With another economic rescue package in the works, House Speaker Nancy Pelosi says she wants money to give more voters the chance to cast their ballots by mail, an option that would allow people to cast a ballot but without the concern over polling places. (AP Photo/Ted S. Warren, File)

It’s a controversial marker for the president to set down when many states have had to delay their primary elections because of fears that in-person voting could spread the virus. And it puts him at odds with congressional Democrats pushing for billions in federal money to ensure no-excuse absentee voting for all Americans in November - as well as many Republican state officials in places like Georgia and West Virginia that are rushing to broaden mail-in voting during the pandemic.

Trump's pointed criticism could cast doubt on the validity of mail-in balloting for some of his supporters and make it awkward for Republican state officials who want to pursue the strategy in case in-person voting is still a problem in November.

"Mail ballots are a very dangerous thing for this country because they're cheaters," Trump said during his daily coronavirus news conference, though there is no evidence that mail in voting substantially increases fraud. In fact, election security hawks may be pleased to see an all-paper ballot election that by nature limits the hacking and other dangers of an electronic process.

Nonetheless, the president went on to charge that widespread voting by mail would lead to thousands of forged ballots. But the president defended his own decision to vote by mail in Florida, saying out-of-state mail votes are more acceptable and suggesting his absentee ballot was better verified than others.

"I can vote by mail because I'm allowed to," he said. "I happen to be in the White House, and I won't be able to go to Florida to vote."

The declarations came the same day Wisconsin held a primary election bedeviled by closed polling sites, long, snaking lines and voters who said they were forced to show up at the polls after absentee ballots they requested after the pandemic struck never arrived, as The Washington Post's Elise Viebeck, Amy Gardner, Dan Simmons and Jan M. Larson report.

Wisconsin is the only state with an April primary that didn't delay voting because of the pandemic. The election went forward after the Republican-led legislature and state Supreme Court blocked efforts by Democratic Gov. Tony Evers to postpone voting.

That prompted Democrats to accuse Republicans of forcing voters to risk their health to exercise their democratic rights. They also fretted that if the federal government doesn't move fast, it could result in millions of Americans being disenfranchised in November.

Trump has also played into Democrats' fears, seeming to suggest during an earlier news conference that voting by mail would favor Democrats and that if he had agreed to Democrats' demands for $4 billion for voting by mail and other reforms in the recent $2 trillion coronavirus stimulus bill, "you'd never have a Republican elected in this country again."

Democrats were able to secure only $400 million with no mandates on how states must spend the money in the stimulus bill. A Senate bill mandating nationwide access to absentee ballots and expanded early voting days sponsored by Sens. Amy Klobuchar, D-Minn., Ron Wyden, D-Ore., and Chris Coons, D-Del., hasn't won over any Republicans.

The fight also "foreshadowed the likelihood that Wisconsin, an important presidential battleground state, could become the epicenter of partisan rancor as the health crisis continues to upend the 2020 race," as my colleagues noted.

State officials don't plan to release results in the race until Monday.

There's no evidence at all of absentee voter fraud on that scale, and states that vote entirely by mail range from left-leaning Washington and Oregon to conservative Utah. Absentee voting is at the center of a handful of voting fraud scandals, however, most notably during a 2018 North Carolina congressional race, which led the State Board of Elections there to order a new vote and produced criminal charges against a Republican operative among others.

Trump also charged, incorrectly, that Evers tried to delay the vote only after the president endorsed the Republican in a hotly contested state Supreme Court case. In fact, Evers pushed to delay the election before Trump’s endorsement and has been seeking other remedies - including sending mail-in ballots to all registered voters. But he is barred from acting without the legislature.