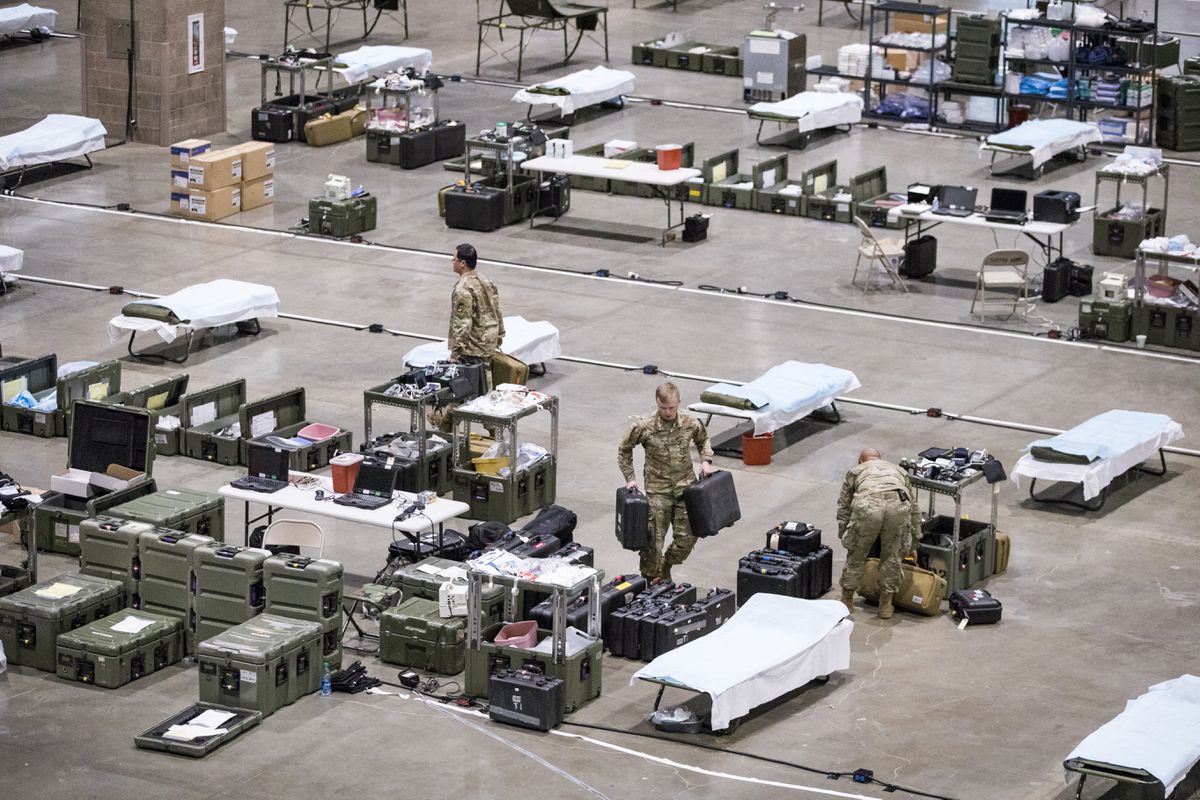 SEATTLE -- Even as some questions remain about the extent of the outbreak in Washington state, Gov. Jay Inslee Wednesday announced he would return to the federal government the field hospital recently assembled in Seattle’s CenturyLink Field Event Center to help the health care system cope with the new coronavirus.

With the USNS Comfort still stationed in New York, and the USNS Mercy in Los Angeles, Inslee's decision could mark the first return of hospital beds to the federal government during the pandemic from anywhere in the nation.

Inslee in recent days has cited more favorable projections for what's to come next in the outbreak of COVID-19 in Washington, the state that at one time led the nation in cases and deaths. As of Wednesday afternoon, there were 9,097 confirmed cases of coronavirus in Washington, with 421 deaths.

The University of Washington's Institute for Health Metrics and Evaluation recently sharply reduced its estimate of how many Washingtonians are likely to die from COVID-19, and it has suggested the state may already have passed its peak for COVID-19 hospitalizations.

Still, those downward revisions come as state health officials have struggled to post full and timely reports for hospital admissions of patients with suspected or confirmed diagnoses of COVID-19.

In addition to the return of the field hospital, Inslee announced Sunday that he was returning 400 ventilators to the federal government's national stockpile, to assist other states in worse shape.

In his statement Wednesday, the governor said the move to disassemble the field hospital will allow the facility to "be deployed to another state facing a more significant need."

[This emergency management specialist has spent years planning for a moment like this. Here’s how an Anchorage hospital is preparing for COVID-19.]

The field hospital, which just last week was toured by the Army's chief of staff, never treated a single patient, according to Inslee spokesman Mike Faulk.

Set up about a week ago by hundreds of U.S. Army soldiers, the 250-bed field hospital was intended to handle any overflow of non-COVID-19 patients while area medical centers dealt with the pandemic.

The portable hospital is designed to include intensive-care beds and surgical services, as well as a laboratory, pharmacy and a radiological unit. The 62nd Medical Brigade from Joint Base Lewis-McChord and the 627th Hospital Center and 10th Field Hospital, both based at Fort Carson, Colorado, were assigned to staff the facility.

Washington now has no requests for military medical personnel to assist in the coronavirus response, according to state Military Department spokeswoman Karina Shagren.

"It's possible the 62nd Medical Brigade will stay in the state to support JBLM's response -- or if necessary, they could go to support another field hospital elsewhere," Shagren wrote in an email.

The governor said the hospital was requested "before our physical distancing strategies were fully implemented and we had considerable concerns that our hospitals would be overloaded with COVID-19 cases.

"But we haven't beat this virus yet, and until we do, it has the potential to spread rapidly if we don't continue the measures we've put in place," Inslee added.

In an email, Inslee spokeswoman Tara Lee wrote that other than the field hospital and the 400 ventilators, she wasn't aware of the state returning any other medical supplies to the federal government.

"While Seattle fought hard for these resources, it's clear other communities are in desperate need of this high-quality medical facility and personnel," Durkan said. "This virus knows no borders, and we must care for the sick and vulnerable, regardless of any city, county, or state line."

Isolation and quarantine sites being run by King County -- such as the Shoreline Temporary Field Hospital -- remain in operation, according to Chase Gallagher, a spokesman for King County Executive Dow Constantine.

That facility is for people who are unable to isolate and recover from COVID-19 in their own house.

On Tuesday, King County had 39 people using its various quarantine and isolation sites, according to Gallagher.