Coronavirus destroys lungs. But doctors are finding its damage in kidneys, hearts and elsewhere. 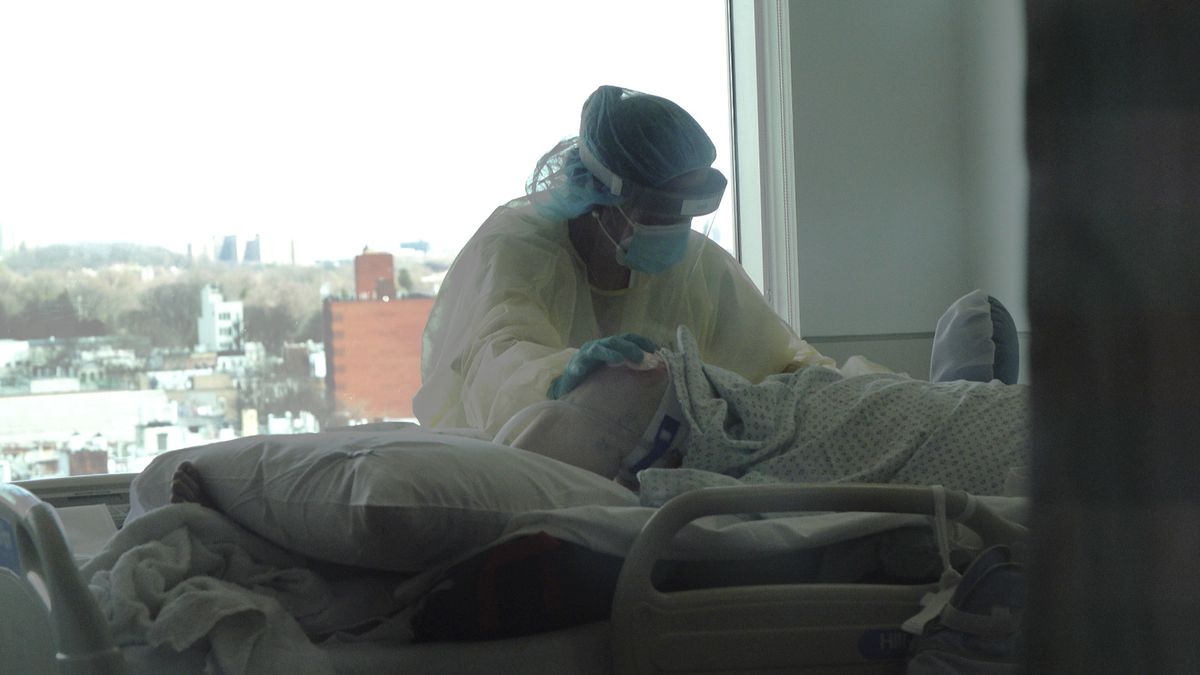 A health-care worker tends to a covid-19 patient inside an intensive care unit at Maimonides Medical Center in Brooklyn on April 1, 2020. Washington Post photo by Jon Gerberg

A health-care worker tends to a covid-19 patient inside an intensive care unit at Maimonides Medical Center in Brooklyn on April 1, 2020. Washington Post photo by Jon Gerberg

The new coronavirus kills by inflaming and clogging the tiny air sacs in the lungs, choking off the body’s oxygen supply until it shuts down the organs essential for life.

But clinicians around the world are seeing evidence that suggests the virus also may be causing heart inflammation, acute kidney disease, neurological malfunction, blood clots, intestinal damage and liver problems. That development has complicated treatment for the most severe cases of covid-19, the illness caused by the virus, and makes the course of recovery less certain, they said.

The prevalence of these effects is too great to attribute them solely to the "cytokine storm," a powerful immune-system response that attacks the body, causing severe damage, doctors and researchers said.

Almost half the people hospitalized because of covid-19 have blood or protein in their urine, indicating early damage to their kidneys, said Alan Kliger, a Yale University School of Medicine nephrologist who co-chairs a task force assisting dialysis patients who have covid-19.

Even more alarming, he added, is early data that shows 14 to 30 percent of intensive-care patients in New York and Wuhan, China - birthplace of the pandemic - have lost kidney function and require dialysis, or its in-hospital cousin, continuous renal replacement therapy. New York intensive care units are treating so much kidney failure, he said, they need more personnel who can perform dialysis and have issued an urgent call for volunteers from other parts of the country. They also are running dangerously short of the sterile fluids used to deliver that therapy, he said.

"That's a huge number of people who have this problem. That's new to me," Kliger said. "I think it's very possible that the virus attaches to the kidney cells and attacks them."

But in medicine, logical inferences often do not prove true when research is conducted. Everyone interviewed for this story stressed that with the pandemic still raging, they are speculating with much less data than is normally needed to reach solid clinical conclusions.

Many other possible causes for organ and tissue damage must be investigated, they said, including respiratory distress, the medications patients received, high fever, the stress of hospitalization in an ICU and the now well-described impact of cytokine storms.

Still, when researchers in Wuhan conducted autopsies on people who died of covid-19, they found nine of 26 had acute kidney injuries and seven had particles of the coronavirus in their kidneys, according to a paper by the Wuhan scientists published April 9 in the medical journal Kidney International.

"It does raise the very clear suspicion that at least a part of the acute kidney injury that we're seeing is resulting from direct viral involvement of the kidney, which is distinct from what was seen in the SARS outbreak in 2002," said Paul Palevsky, a University of Pittsburgh School of Medicine nephrologist and president-elect of the National Kidney Foundation.

One New York hospital recently had 51 ICU patients who needed 24-hour kidney treatment but had just 39 machines to do it, he said. The hospital had to ration the care, keeping each patient on the therapy less than 24 hours a day, he said.

The virus also may be damaging the heart. Clinicians in China and New York have reported myocarditis, an inflammation of the heart muscle, and, more dangerous, irregular heart rhythms that can lead to cardiac arrest in covid-19 patients.

"They seem to be doing really well as far as respiratory status goes, and then suddenly they develop a cardiac issue that seems out of proportion to their respiratory issues," said Mitchell Elkind, a Columbia University neurologist and president-elect of the American Heart Association. "This seems to be out of proportion to their lung disease, which makes people wonder about that direct effect."

One review of severely ill patients in China found that about 40 percent suffered arrhythmias and 20 percent had some form of cardiac injury, Elkind said. "There is some concern that some of it may be due to direct influence of the virus," he said.

The new virus enters the cells of people who are infected by latching onto the ACE2 receptor on cell surfaces. It unquestionably attacks the cells in the respiratory tract, but there is increasing suspicion that it is using the same doorway to enter other cells. The gastrointestinal tract, for instance, contains 100 times more of these receptors than other parts of the body, and its surface area is enormous.

"If you unfurl it, it's like a tennis court of surface area - this tremendous area for the virus to invade and replicate itself," said Brennan Spiegel, co-editor in chief of the American Journal of Gastroenterology.

In a subset of covid-19 cases, researchers have found, the immune system battling the infection goes into hyperdrive. The uncontrolled response leads to the release of a flood of substances called cytokines that, in excess, can result in damage to multiple organs. In some severely ill covid-19 patients, doctors have found high levels of a pro-inflammatory cytokine called interleukin-6, known by the medical shorthand IL-6.

The unfettered response, also called "cytokine release syndrome," has long been recognized in other patients, including those with autoimmune diseases such as rheumatoid arthritis or in cancer patients undergoing certain immunotherapies.

"When your cytokines are systemically out of control, bad stuff happens," he said. "It can be a complete disaster." It isn't clear why cytokine storms occur in some patients and not others, though genetic factors may play a role, some doctors say.

To treat cytokine storms, some doctors are using anti-IL-6 drugs such as tocilizumab, which is approved for cancer patients who develop cytokine storms as a result of immunotherapy.

Another odd, and now well-known, symptom of covid-19 is loss of smell and taste. Claire Hopkins, president of the British Rhinological Society, said studies of patients in Italy and elsewhere have shown that some lose their sense of smell before they show signs of being sick.

"The coronavirus can actually attack and invade olfactory nerve endings," Hopkins said. When these aroma-detecting fibers are disrupted, they can't send odors to the brain.

Anosmia - the medical term for the inability to smell - was not initially recognized as a symptom of covid-19, Hopkins said. Doctors were so overwhelmed by patients with severe respiratory problems, she said, that "they didn't ask the question."

But subsequent data from a symptom-tracking app has shown that 60 percent of people later diagnosed with covid-19 reported losing their senses of smell and taste. About a quarter of participants experienced anosmia before developing other symptoms, suggesting it can be an early warning sign of infection.

Intriguingly, Hopkins said, people who lose their sense of smell don't seem to develop the same severe respiratory problems that have made covid-19 so deadly. But a very small number of patients have experienced confusion, low blood oxygen levels and even lost consciousness - a sign that the virus may have traveled along their olfactory nerve endings straight to the central nervous system.

"Why you get this different expression in different people, nobody knows," she said.

There are also reports that covid-19 can turn people's eyes red, causing pinkeye, or conjunctivitis, in some patients. One study of 38 hospitalized patients in Hubei province, China, found that a third had pinkeye.

But like many of the non-respiratory effects of the virus, this symptom may be relatively uncommon - and may develop only in people already severely ill. The fact that the virus has been found in the mucus membrane that covers the eye in a small number of patients, however, does suggest that the eye could be an entryway for the virus - and is one reason that face shields and goggles are being used to protect health-care workers.

The virus also is having a clear impact on the gastrointestinal tract, causing diarrhea, vomiting and other symptoms. One study found that half of covid-19 patients have gastrointestinal symptoms, and specialists have coined a Twitter hashtag, #NotJustCough, to raise awareness of them.

Studies suggest that patients with digestive symptoms will also develop a cough, but one may occur days before the other.

"The question is, is it kind of behaving like a hybrid of different viruses?" Spiegel said. "What we're learning is, it seems anyway, that this virus homes in on more than one organ system."

Reports also indicate that the virus can attack the liver. A 59-year-old woman in Long Island came to the hospital with dark urine, which was ultimately found to be caused by acute hepatitis. After she developed a cough, physicians attributed the liver damage to a covid-19 infection.

Spiegel said he has seen more such reports every day, including one from China on five patients with acute viral hepatitis.

A particular danger of the virus appears to be its tendency to produce blood clots in the veins of the legs and other vessels, which can break off, travel to the lung and cause death by a condition known as pulmonary embolism.

An examination of 81 patients hospitalized with pneumonia caused by covid-19 in Wuhan found that 20 had such events and that eight of them died. The peer-reviewed data was published online April 9 in the Journal of Thrombosis and Hemostasis.

Across New York City, blood thinners are being used with covid-19 patients much more than expected, said Sanjum Sethi, an interventional cardiologist and assistant professor of medicine at Columbia University's Irving Medical Center.

“We’re just seeing so many of these events that we have to investigate further,” he said.