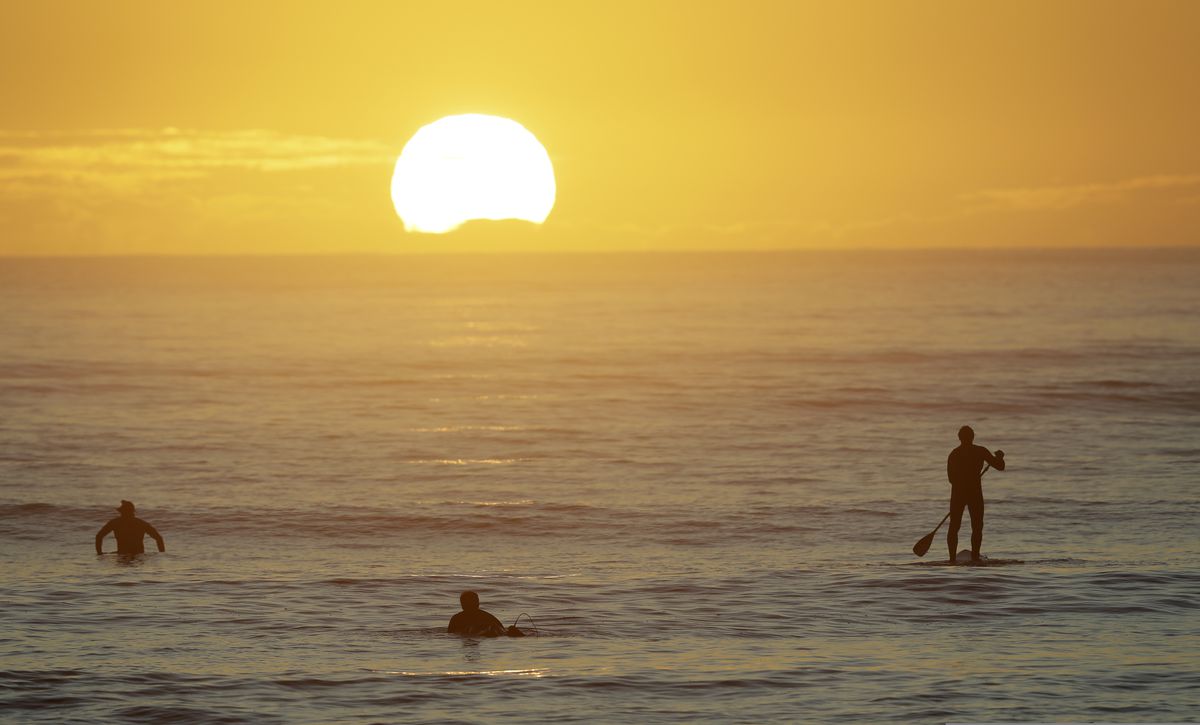 HAVELOCK NORTH, New Zealand - After 33 days without swimming or surfing, their favorite “flat white” coffees or fish and chips, New Zealanders emerged from strict lockdown Tuesday, when businesses were allowed to reopen if they could operate in a contactless way.

But socializing remains limited, as this country of five million people tries to capitalize on its scorched-earth approach to fighting the coronavirus.

"We are not out of the woods," Prime Minister Jacinda Ardern said as the country ticked down a notch to Level 3 restrictions. "It's a recovery room of sorts, to assess if the incredible work that New Zealanders have done at Level 4 to break the virus's chain of transmission and prevent further community outbreak has worked."

For almost five weeks, New Zealanders have been required to stay at home unless going to essential jobs or to the grocery store. They could exercise, but only near their homes. It was a strategy that Ardern called "go hard, go early."

The measures, introduced when the country had 102 coronavirus cases, have worked. New cases have been in the single digits for 11 days, with only three reported Tuesday, and nearly all of them in known clusters.

Almost 83 percent of the 1,472 people infected have now recovered, while 19 people have died, two in their 60s and the rest older. The toll is so small that Ardern has received a phone call with each loss of life.

Before the lockdown, New Zealand appeared to be on a similar trajectory to Italy, said John McDermott, executive director at Motu Economic and Public Policy Research, who has been modeling the virus's transmission.

"I think New Zealand has done remarkably well," he said. "There's some frustration with this tail - this is a terrible disease to control - but we've got it down to a level where it will be easier to track and trace."

Under the slightly easier conditions, New Zealanders are allowed to return to pastimes that allow physical distance, like fishing and golf. But the country's beloved rugby is still off-limits.

Businesses were able to reopen Tuesday if they could maintain distance between workers and operate without physical contact with customers. From cafes to excavator rentals, firms were taking online orders and putting the goods out for customers to collect.

It appeared that Kiwis had missed fast food the most during the lockdown. Before dawn on Tuesday, long lines formed outside McDonald's and KFC.

"My children won't let me go home without it. Plain and simply, they are just begging for cheeseburgers," said Aaron Pace, who runs a carpet-cleaning company, as he waited in the drive-through at "Macca's," as it's called here. The line was so long at the branch in this small town that police were on the scene to manage the traffic.

"I'm going to buy way more than anyone can eat, so then in three or four hours' time, there's still one there they can chuck in the microwave," Pace said, before heading to the liquor store to collect his online order.

The prime minister's household was among those hankering for takeout. "NZ anticipating takeaways starting again like..." her partner, fishing show host Clarke Gayford, tweeted, with a video of a jaguar emerging from a stream with a flailing alligator between its jaws.

Like other countries, New Zealand has tried to balance protecting public health with minimizing the economic impact. The short, sharp pain approach was widely supported.

"It's been pretty tough for sure, having zero income," said Sarah Watson, owner of Deliciosa, a tapas restaurant that experienced a rush on its signature "bang bang cauliflower" when it reopened.

"Luckily the government did shut everything down. It would be much worse to limp on through," Watson said, adding that her business had received wage subsidies from the government and hadn't had to lay off any employees.

With the move to Level 3, one million people are at work and about 75 percent of the economy is operating again, Ardern said Tuesday.

The engine of New Zealand's economy - the "primary sector" of products such as dairy and meat, wool and wine - should get up to speed quickly, McDermott said. Those industries are able to resume operations fairly easily under the physical distancing guidelines, and New Zealand's main markets in Asia are beginning to reopen.

But the vital tourism sector remains closed - as are the borders - and the unemployment rate is expected to jump. And the specter of a second wave of infections, already seen in places such as Singapore, looms ominously.

Siouxsie Wiles, a microbiologist at the University of Auckland, is worried that New Zealanders will let their guard down too quickly.

"I'm a little bit anxious because we need to take this really seriously and still minimize our contact with others," she said. "We all need to pay attention to the rules. This is not about being social, this is about stimulating the economy."

Indeed, New Zealanders are still asked to remain in their "bubbles," limiting contact with others to a small group of people. Schools remain closed except for the children of essential workers such as health care and supermarket staff. Religious gatherings, wedding ceremonies and haircuts are prohibited.

Outside rest homes, all of New Zealand's clusters of infections had a social element: two weddings, two parties, a rugby tournament and a cattle conference.

"If we go back to life as normal then it won't take long for a few cases to become hundreds of cases," Wiles said.

The top health official, Ashley Bloomfield, had a similar message, saying that New Zealand needed to be "even more vigilant" to achieve its goal of eliminating the virus. It defines this not as zero cases, but as reducing infections to a small and easily containable number.

"Elimination is not a point in time," Bloomfield said Tuesday. "It is a sustained effort to keep it out and stamp it out over many months."

Now the effort turns to contact tracing, with an app to help that process expected to be ready before the Level 3 lockdown is tentatively scheduled to end on May 11.

A survey by HorizonPoll found that 73 percent of respondents said they supported allowing police and health authorities to use their phone data to track and trace people who had come in contact with confirmed coronavirus cases. Only 16 percent were opposed.

But first, food. On Tuesday, it seemed that half the country was enjoying not having to cook dinner for the first time in almost five weeks.