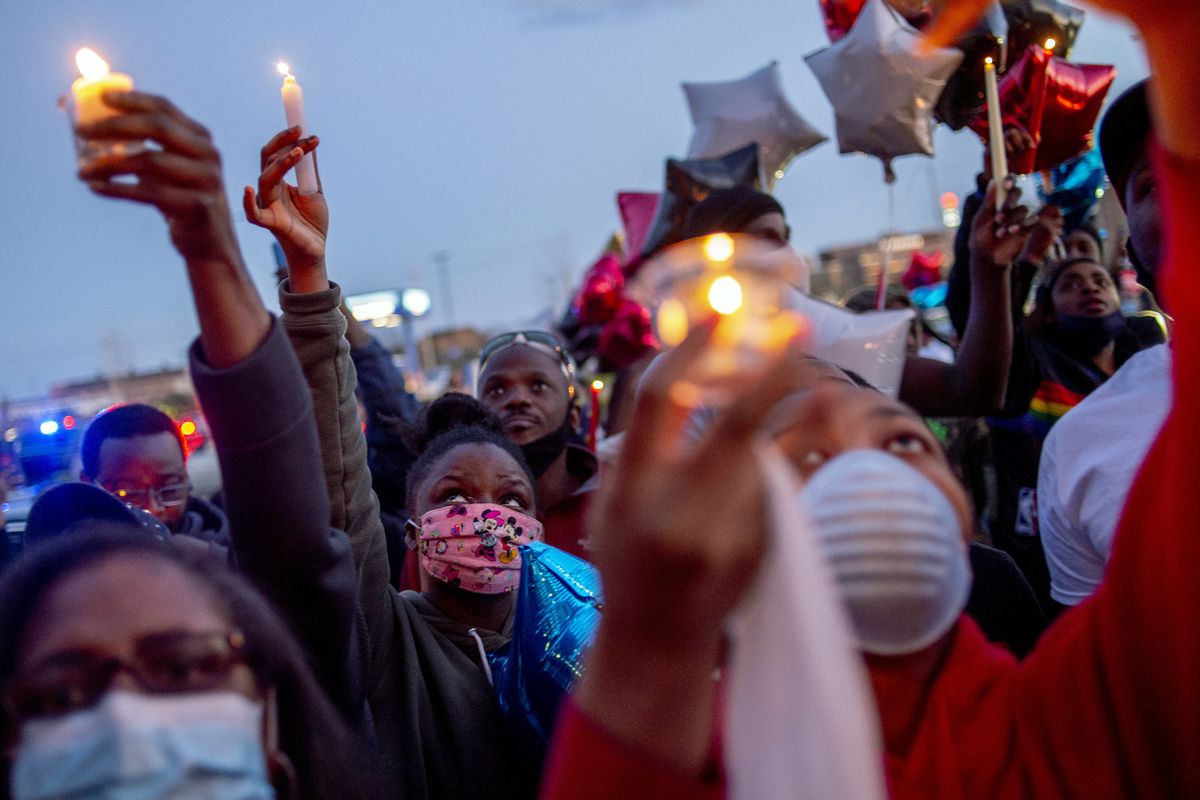 Family and friends lift their candles to the sky and release balloons to honor Calvin Munerlyn during a vigil Sunday, May 3, 2020, in Flint, Mich. Munerlyn was shot and killed Friday at a Family Dollar store in Flint. He'd worked at the store as a security guard for a little more than one year. (Jake May/The Flint Journal via AP)

Family and friends lift their candles to the sky and release balloons to honor Calvin Munerlyn during a vigil Sunday, May 3, 2020, in Flint, Mich. Munerlyn was shot and killed Friday at a Family Dollar store in Flint. He'd worked at the store as a security guard for a little more than one year. (Jake May/The Flint Journal via AP)

A Family Dollar store security guard was fatally shot in Flint, Michigan, on Friday after telling a customer her child had to wear a face mask to enter the store, prosecutors said.

An argument began when the security guard, Calvin Munerlyn, 43, told Sharmel Lashe Teague, 45, that customers needed to wear face masks in the store, Genesee County Prosecutor David Leyton said at a Monday news conference. She yelled at him, spit on him and drove off, Leyton said. About 20 minutes later, her car returned to the store and her husband and son, Larry Edward Teague, 44, and Ramonyea Travon Bishop, 23, stepped out and confronted Munerlyn, according to investigators who spoke to witnesses in the store and reviewed surveillance video. Bishop shot him, Leyton said.

Leyton said Munerlyn was doing his job, protecting others and enforcing a statewide executive order. In Michigan, people are required to wear face coverings in grocery stores, which can refuse service to anyone who isn't wearing a mask.

"We simply can't devolve into an 'us versus them' mentality," he said. "We need to make a commitment as a community to do the things necessary to allow us to stay healthy and turn a page on this crisis together. Not for ourselves but for Calvin Munerlyn, who lost his life needlessly and senselessly."

All three are charged with first-degree premeditated murder and gun counts. Larry Teague is additionally charged with violating the mandate requiring people to wear face coverings inside grocery stores, which is a misdemeanor, Leyton said.

Social media posts by friends and family memorialized Munerlyn, a father of eight children, by his nickname: "Big Duper." A GoFundMe account for the family has raised more than $28,000, exceeding its goal. Latryna Sims Munerlyn, his wife of 10 years, told NBC 25 that he worked at the store for more than a year.

"He would have given you the shirt off his back, the food off his table," Courtney Cabine, a family friend, told the news station. "He was the life of the party."

Nickolas Harrison, who was Munerlyn's friend for 15 years and had worked other security jobs with him, told The Washington Post that Munerlyn was killed trying to protect others.

"My friend Duper was killed for telling a lady she has to put a mask on to come in the store," he said, "which could save her life or the life of others."

Flint District 1 Commissioner Bryant Nolden, who spoke during the Monday news conference, said he often saw Munerlyn training others free of charge at a public gym in Flint. "When I found out what had happened to him, it really broke my heart because I knew what kind of person he was," Nolden said. "We need to stop the senseless violence in the community. This was totally uncalled for, he didn't bother a soul. All he wanted to do was take care of his family and he always had his kids with him."

Randy Guiler, a company representative, called the shooting "tragic" in a statement given to The Post.

“We will continue to cooperate fully with local authorities on their investigation,” Guiler wrote. “As always, we are committed to ensuring a safe environment for our associates and customers. Out of respect for the family’s privacy, we are not commenting further at this time.”