Masks become a flashpoint for protests and fights as businesses, beaches and parks reopen 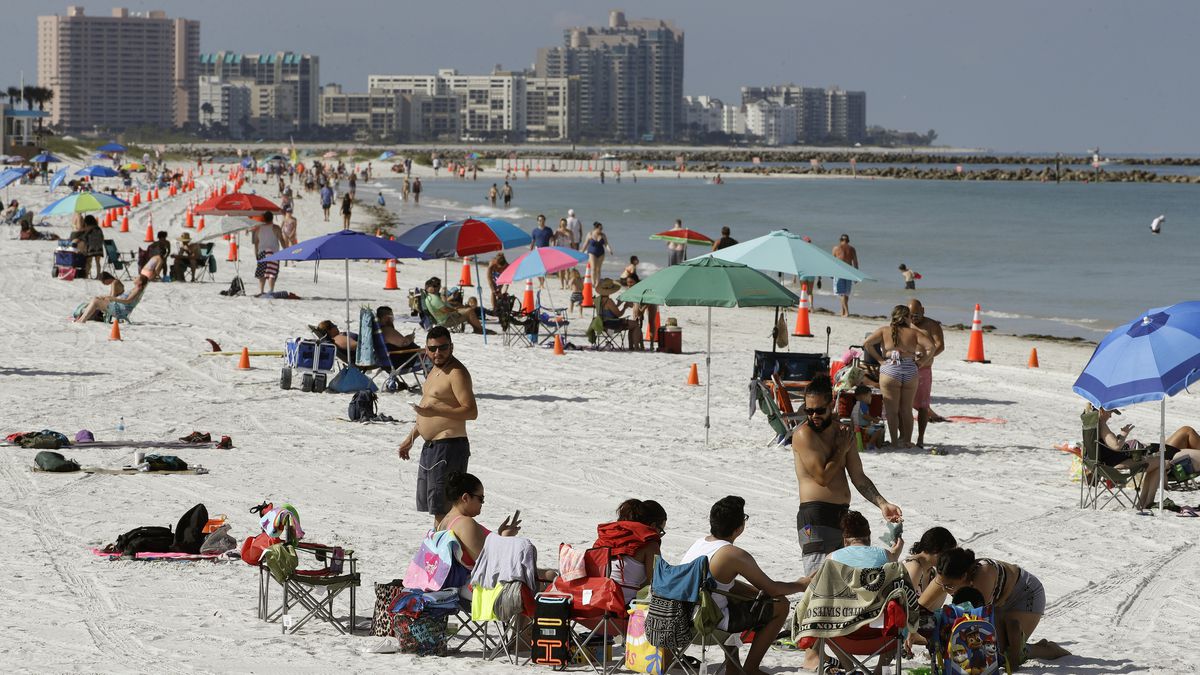 Cones are set up to help beachgoers keep a safe distance from one another after Clearwater Beach officially reopened to the public Monday, May 4, 2020, in Clearwater Beach, Fla. Many public beaches and restaurants are reopening as part of Florida Gov. Ron DeSantis' plan to stop the spread of the coronavirus. (AP Photo/Chris O'Meara)

Cones are set up to help beachgoers keep a safe distance from one another after Clearwater Beach officially reopened to the public Monday, May 4, 2020, in Clearwater Beach, Fla. Many public beaches and restaurants are reopening as part of Florida Gov. Ron DeSantis' plan to stop the spread of the coronavirus. (AP Photo/Chris O'Meara)

As Florida lifted some its coronavirus restrictions this weekend, sunny weather beckoned crowds to gather at newly opened parks and beaches, where public officials sanctioned the springtime outings as long as people wore masks and kept their distance.

Over three days, more than 7,300 people showed up at Miami Beach parks without covering their mouths and noses, Miami Beach police said in a statement on Facebook. Hundreds more failed to maintain the mandated six feet of social distancing.

The rule-breakers cost everyone the chance to enjoy the city's popular beach at South Pointe Park, which the city closed again Monday after park rangers issued thousands of verbal warnings between Friday and Sunday, police said.

"There is no way to effectively enforce social distancing when hundreds of individuals refuse to do so," Miami Beach city manager Jimmy Morales told CNN.

The scofflaws in the southern Florida city are hardly alone. People in many states have resisted guidelines that encourage or require face masks in public spaces to prevent the spread of the novel coronavirus.

The masks are hot, uncomfortable, and annoying for many. Others view the mandate to cover their faces as government overreach. Escalating tension over the precaution has spurred protests, rebellions, fights and even an alleged murder.

Police arrested a man in Decatur, Illinois, on Friday after he shoved a gas station clerk who insisted he wear a mask while paying for fuel on the first day of the state's newly imposed rules that require people to cover their faces inside businesses.

Officers in Michigan are searching for a man who allegedly wiped his nose on a Dollar Tree employee’s sleeve on Saturday after she told him he had to wear a mask to shop inside, the Detroit Free Press reported. And a man shot and killed a security guard at a Family Dollar in Michigan after the guard had an argument with a woman who refused to comply with the statewide executive order that requires people to wear masks inside shops, Genesee County Prosecutor David Leyton said at a news conference Monday.

The small city of Stillwater, Oklahoma, had to revoke a local order requiring residents to don face coverings inside stores and restaurants that reopened over the weekend after workers endured harassment and threats.

Ohio Republican Gov. Mike DeWine similarly reversed a statewide edict to require masks because people "were not going to accept the government telling them what to do."

Even states that have largely embraced public health experts' advice, like California, have seen some rebellions over masks. In a San Diego suburb, a man wore a Ku Klux Klan hood to the grocery store in an apparent protest of the store's mask requirement for shoppers. Meanwhile, the San Francisco police chief barred officers from wearing masks decorated with "Thin Blue Line" imagery.

As many elected officials and doctors plead with the public to wear masks if they leave their homes, some politicians are leading by example in the other direction.

Vice President Mike Pence drew criticism last week when he violated a mask requirement during a visit to the Mayo Clinic. On Monday, he issued a mea culpa and admitted that he should have worn a mask despite being tested frequently for the virus.

"I didn't think it was necessary," Pence said Monday, "but I should have worn a mask at the Mayo Clinic."

Similarly, Missouri Republican Gov. Mike Parsons refused to sport a mask as he visited small businesses in his state. In photos, he stood barefaced among workers wearing masks. He told reporters at a news conference that he did not believe the government should force people to cover their faces, despite guidelines from the Centers for Disease Control and Prevention that recommend face masks.

"It really goes back to your personal responsibility," Parsons told reporters, the Kansas City Star reported.

He said choosing to wear a mask, or not, is a personal choice.

In Ohio, where protests against the state's stay-at-home policies have grown increasingly testy in recent days, a state lawmaker justified his lack of a mask with a religious argument.

"We're created in the image and likeness of God," state Rep. Nino Vitale, R-Ohio, said in a video clip he posted on Facebook. "When we think of image, do we think of a chest or our legs or our arms? We think of their face. I don't want to cover people's faces."

Although resistance to wearing masks appears to split along ideological lines in many instances, with protests against the measures organized largely by conservative activists and championed by Republican lawmakers, polling has consistently indicated that most Americans support the social distancing precautions in place to prevent the spread of covid-19 and many have been willing to wear masks.

Shortly after the CDC recommended people wear masks in early April, more than half the respondents to an ABC News/Ipsos poll of people who ventured outside their homes reported wearing them. And although more Democrats reported using masks at that time, 47% of Republicans also said they were covering their faces.

A recent Washington Post-University of Maryland poll found that 62% of Republicans and 72% of Democrats said state restrictions on businesses were "appropriate" to stem the coronavirus pandemic. Another April poll by CBS News/YouGov showed that only 43% of Republicans, and just 23% of people overall, support the anti-social distancing protesters.

And if social distancing policies continue as businesses reopen and people return to work, even some ardent skeptics may be persuaded to cooperate and don a mask, according to Robert Kahn, a law professor at the University of St. Thomas in Minneapolis who has studied Americans' attitudes toward masks.

"If I can go to work and the cost of marginal improvement in my life is wearing a mask, maybe Americans of both parties do accommodate ourselves to it," Khan told The Washington Post last month.

The resistance to masks by some has troubled public health experts, who view the practice as an important precaution for people who cannot distance themselves from others.

Deborah Birx, who is the White House coronavirus response coordinator, expressed dismay on Sunday at images of protesters without masks standing close to each other inside the Michigan capitol building.

“It’s devastatingly worrisome to me personally because if they go home and infect their grandmother or their grandfather who has a co-morbid condition and they have a serious or a very - or an unfortunate outcome,” Birx said on Fox News Sunday, “they will feel guilty for the rest of our lives. So, we need to protect each other at the same time as we’re voicing our discontent.”