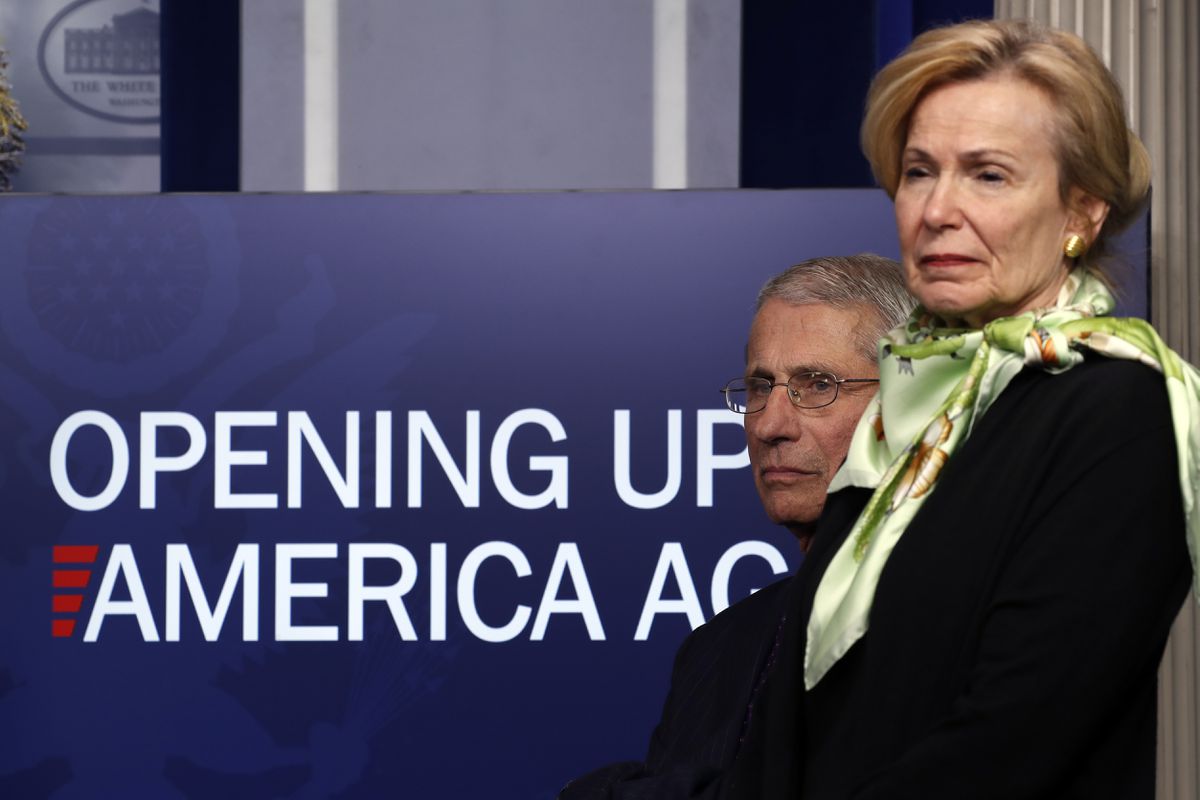 FILE - In this April 16, 2020, file photo, Dr. Anthony Fauci, director of the National Institute of Allergy and Infectious Diseases, and Dr. Deborah Birx, White House coronavirus response coordinator, listen during a briefing about the coronavirus in the James Brady Press Briefing Room of the White House in Washington. The Trump administration has shelved a set of detailed documents created by the nation’s top disease investigators meant to give step-by-step advice to local leaders deciding when and how to reopen mass transit, day care centers, restaurants, bars and other public places during the still-raging pandemic. (AP Photo/Alex Brandon, File)

FILE - In this April 16, 2020, file photo, Dr. Anthony Fauci, director of the National Institute of Allergy and Infectious Diseases, and Dr. Deborah Birx, White House coronavirus response coordinator, listen during a briefing about the coronavirus in the James Brady Press Briefing Room of the White House in Washington. The Trump administration has shelved a set of detailed documents created by the nation’s top disease investigators meant to give step-by-step advice to local leaders deciding when and how to reopen mass transit, day care centers, restaurants, bars and other public places during the still-raging pandemic. (AP Photo/Alex Brandon, File)

WASHINGTON - President Donald Trump in recent weeks has sought to block or downplay information about the severity of the coronavirus pandemic as he urges a return to normalcy and the rekindling of an economy that has been devastated by public health restrictions aimed at mitigating the outbreak.

His administration has sidelined or replaced officials not seen as loyal, rebuffed congressional requests for testimony, dismissed jarring statistics and models, praised states for reopening without meeting White House guidelines, and, briefly, pushed to disband a task force created to combat and communicate about the public health crisis.

Several Republican governors are following Trump's lead as an effort takes shape to control the narrative about a pandemic that has continued to rage throughout a quickly reopening country. With polls showing most consumers still afraid to venture out of their homes, the Trump administration has intensified its efforts to soothe some of those fears through a messaging campaign that relies on tightly controlling information about a virus that has proven stubbornly difficult to contain.

"If the message were to go out with complete objectivity, it would be disastrous for Trump," said Max Skidmore, a political science professor at the University of Missouri at Kansas City and the author of a book on presidential responses to pandemics. "So he is doing his best to prevent experts from speaking out or using their expertise, and he's simply trying to divert attention."

Trump's information-control tactics are being replicated in states across the country, where governors are lifting stay-at-home orders against the advice of public health officials.

In Arizona, where Gov. Doug Ducey, a Republican, is pushing businesses to reopen, the state health department abruptly halted the work of a team of experts who predicted the outbreak's peak was still about two weeks away. The department reversed the decision amid an outcry after it became public.

Governors in Georgia, Texas, Iowa and elsewhere have been praised by Trump as they ignored recommendations from doctors and health officials in their states to begin phased reopenings. States such as Florida have limited or redacted public information about their coronavirus deaths.

Administration officials say the moves reflect a shift, driven by Trump, away from focusing on the health challenges caused by pandemic and toward restarting economic activity and pulling the country out of recession. The evolution is being driven in part by the political calendar, with just six months before voters decide the president's fate.

While Trump reversed course Wednesday and declared that the White House coronavirus task force would continue indefinitely, its public facing role has already been curtailed.

One senior administration official said the public health experts are scaring people, and their dire warnings have often been at odds with the president's call to "open up our country."

Meetings by the task force, which had been occurring on a daily basis, have reduced in their frequency, said the official, who, like others, spoke on the condition of anonymity to discuss internal deliberations.

The task force's daily press briefings, which previously featured key health experts alongside Trump, have been reduced and reconfigured to showcase the newly appointed White House press secretary while other events are staged to highlight the president conferring with business owners.

The administration also has not released guidelines from the Centers for Disease Control and Prevention that have been in the works for weeks and offered advice on how to reopen certain businesses and facilities.

In a sharply worded statement Thursday, the White House blasted the guidelines.

"Issuing overly specific instructions - that CDC leadership never cleared - for how various types of businesses open up would be overly prescriptive and broad for the various circumstances States are experiencing throughout the country," the unnamed task force official said in a statement released by the White House press office following an Associated Press report that the guidelines had been shelved. "Guidance in rural Tennessee shouldn't be the same guidance for urban New York City."

The CDC, which has seen its public role significantly downsized since the early days of the crisis, continues to play a more limited part in the coronavirus response than it has in previous viral outbreaks, according to experts and administration officials. That has unnerved some lawmakers and public health experts.

"Irony around CDC not issuing it's reopen guidance, whatever the reason, is a lot of business literally can't reopen without it because CDC is a de facto regulator in a public health crisis," Scott Gottlieb, former commissioner of the Food and Drug Administration, wrote Thursday on Twitter. "CDC must publish its umbrella document to publish more detailed industry specific guidance."

The limits of Trump's ability to shape the public's understanding of his coronavirus response could be tested next week, as major congressional hearings featuring career government health officials are set to take place. Anthony Fauci, the nation's top infectious disease expert and a member of Trump's task force, is one of several officials scheduled to testify before a Senate committee on May 12.

Fauci has regularly contradicted Trump's sunny descriptions of the crisis and described the administration's early testing efforts as "a failing."

While the White House blocked Fauci from testifying before the Democratic-controlled House, its blanket policy of limiting congressional testimony has not stopped the oversight process. A senior government scientist who filed a whistleblower complaint alleging that the Department of Health and Human Services made critical mistakes in the weeks before the outbreak became a pandemic is expected to testify before a House committee next week.

Rick Bright, former director of the Biomedical Advanced Research and Development Authority, said in his complaint that his early efforts to take proactive measures against the virus "encountered resistance from HHS leadership, including Secretary [Alex] Azar, who appeared intent on downplaying this catastrophic event."

Trump has tried to dismiss Bright - who was demoted from his position after his warnings - as a "disgruntled" employee.

White House press secretary Kayleigh McEnany attacked House Democrats for trying to stage a "publicity stunt" with their requests for hearings, including with Fauci. Trump called the House "a bunch of Trump haters" as he defended his decision to block testimony before the congressional body.

But the White House's effort to tightly control which officials are allowed to testify before Congress has been criticized by Democrats and some Republicans.

Rep. Tom Cole of Oklahoma, the top Republican on a House panel that requested Fauci's appearance, said Wednesday that it would have been "useful to this country" to hear from the high-profile member of the president's coronavirus task force.

Democrats have been more forceful in their criticism.

"President Trump should learn that by muzzling science and the truth, it will only prolong this health and economic crisis," Senate Minority Leader Charles Schumer, D-N.Y., said in a statement Monday. "The president's failure to accept the truth, and then his desire to hide it, is one of the chief reasons we are lagging behind so many other countries in beating this scourge."

Trump's shift toward message-control comes as he has been frustrated with scientific experts, data and models that have failed to support his desire for a quick solution to the crisis.

The administration released multiple statements this week disavowing a draft report that projected as many as 3,000 daily coronavirus deaths beginning on June 1. The report, which carried a CDC logo and featured in a FEMA briefing, had not been vetted by the White House, McEnany said.

On Tuesday, a day after the White House attacked the report, the United States recorded more than 2,400 coronavirus deaths.

An alternative "cubic" model, produced by the White House Council of Economic Advisers, was widely panned by economists and health experts after it appeared to show coronavirus deaths plunging toward zero by May 15. There has been no such plunge, and outside of New York, cases continue to rise nationally. There have been more than 1.2 million cases and 74,000 deaths recorded in the United States, the largest totals in the world.

Some public health experts worry that the number of new cases may remain stuck at a level of about 20,000 to 30,000 a day. That would be an indication that while social distancing didn't fail, "it didn't work as well as we expected," Gottlieb said in an interview.

By now, he said, he expected to see the number of cases and deaths declining - not hitting a plateau - given extensive social distancing and the shutdown of much of the economy.

The steadily high number of coronavirus cases and the growing death count have stood in sharp contrast to Trump's cheerful language about reopening the economy. The president has encouraged several states to begin relaxing stay-at-home orders even though they have failed to meet benchmarks from the White House's own guidelines. Those guidelines encourage states to wait to see a decline in cases over a two-week period before relaxing social distancing measures.

The president has blamed widespread testing for the high number of positive cases and continues to dismiss governors' and public health experts' persistent calls for more testing before relaxing social distancing restrictions.

"In a way, by doing all of this testing, we make ourselves look bad," Trump told reporters Wednesday. On Thursday he told reporters testing was "overrated."

Skidmore, whose 2016 book "Presidents, Pandemics and Politics" describes presidential leadership during health crises as critical, said Trump's push to turn the battle against the coronavirus into a form of information warfare will ultimately fail.