Outbreaks in Germany, S. Korea show the risks in easing up 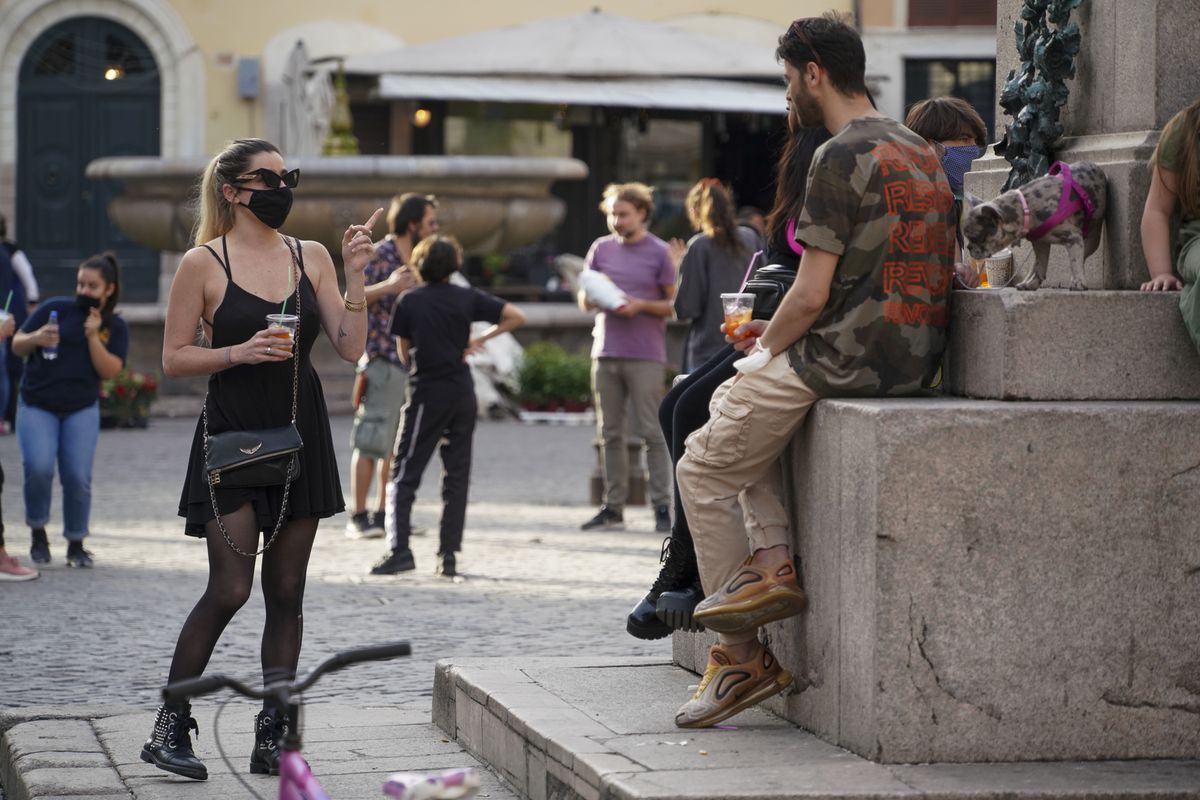 People enjoy a drink in Rome's fashionable Campo De' Fiori Square, as the city is slowly returning to life after the long shutdown due to the coronavirus outbreak, Friday, May 8, 2020. (AP Photo/Andrew Medichini)

People enjoy a drink in Rome's fashionable Campo De' Fiori Square, as the city is slowly returning to life after the long shutdown due to the coronavirus outbreak, Friday, May 8, 2020. (AP Photo/Andrew Medichini)

ROME — South Korea’s capital closed down more than 2,100 bars and other nightspots Saturday because of a new cluster of coronavirus infections, Germany scrambled to contain fresh outbreaks at slaughterhouses, and Italian authorities worried that people were getting too friendly at cocktail hour during the country’s first weekend of eased restrictions.

The new flareups — and fears of a second wave of contagion — underscored the dilemma authorities face as they try to reopen their economies.

Around the world, the U.S. and other hard-hit countries are wrestling with how to ease curbs on business and public activity without causing the virus to come surging back.

In New York, the deadliest hot spot in the U.S., Gov. Andrew Cuomo said three children died from a possible complication of the coronavirus involving swollen blood vessels and heart problems. At least 73 children in the state have been diagnosed with symptoms similar to Kawasaki disease — a rare inflammatory condition — and toxic shock syndrome. But there is no proof the mysterious syndrome is caused by the virus.

A Cuomo spokesman said Saturday that the governor was extending stay-at-home restrictions to June 7, but another top aide later clarified that that was not so; the May 15 expiration date for the restrictions remains in place “until further notice,” Melissa DeRosa said in an evening statement.

Elsewhere, Belarus, which has not locked down despite increasing case numbers, saw tens of thousands of people turn out to mark Victory Day, the anniversary of Nazi Germany’s defeat in 1945. That was in contrast to Russia, which skipped the usual grand military parade in Red Square.

Worldwide, 4 million people have been confirmed infected by the virus, and more than 275,000 have died, including over 78,000 in the U.S., according to a tally kept by Johns Hopkins University. Spain, France, Italy and Britain have reported around 26,000 to 32,000 deaths each.

Germany and South Korea have both carried out extensive testing and contact tracing and have been hailed for avoiding the mass deaths that have overwhelmed other countries. But even there, authorities have struggled to find the balance between saving lives and salvaging jobs.

Seoul shut down nightclubs, hostess bars and discos after dozens of infections were linked to people who went out last weekend as the country relaxed its social-distancing guidelines. Many of the infections were connected to a 29-year-old man who visited three nightclubs before testing positive.

Mayor Park Won-soon said health workers were trying to contact some 1,940 people who had been at the three clubs and other places nearby. The mayor said gains made against the virus are now threatened “because of a few careless people.”

Health officials in Germany faced outbreaks at three slaughterhouses in what was seen as a test of the government’s strategy for dealing with any resurgence of the virus during the easing of the restrictions. At one slaughterhouse, in Coesfeld, 180 workers tested positive.

Businesses in the U.S. continue to struggle as more employers are realizing their laid off employees might not return to work anytime soon. U.S. health officials are watching for a second wave of infections, roughly two weeks after states began gradually reopening with Georgia largely leading the way.

Some malls have opened up in Georgia and Texas, while Nevada restaurants, hair salons and other businesses were able to have limited reopenings Saturday or once again allow customers inside their establishments after nearly two months of restrictions. Meanwhile some national parks have started testing out public access.

Italy saw people return to the streets for their traditional aperitivos and revel in fine weather as restrictions there were eased, alarming some public officials.

Milan Mayor Giuseppe Sala warned that “a handful of crazy people’’ were putting the city’s recovery at risk and threatened to shut down the trendy Navigli district after crowds of young people were seen out at aperitivo hour ignoring social-distancing rules.

In Rome, the Campo dei Fiori flower and vegetable market was bustling Saturday morning, the first weekend Italians were allowed outside for more than just work and necessities.

But confusion about what is now allowed and what is not created frustration for business owners.

Carlo Alberto, owner of the TabaCafe, an Argentine empanada bar that was selling cocktails to a few customers, said that since reopening this week he had been threatened with a fine by the police because of the crowds in front of his bar.

“Am I supposed to send them home? They need a guard here to do that,” he said. “The laws aren’t clear, the decree isn’t clear. You don’t know what you can do.”

In the U.S., the head of the Food and Drug Administration, Stephen Hahn, put himself in quarantine after coming into contact with an infected person. And the government said it is delivering supplies of remdesivr, the first drug shown to speed the recovery of COVID-19 patients, to six more states. Seven states were sent cases of the medicine earlier in the week.

Elsewhere, Pakistan allowed shops, factories, construction sites and other businesses to reopen Saturday, while more than 1,600 new cases and 24 deaths were reported. Prime Minister Imran Khan said the government is rolling back curbs because it can’t support millions of families that depend on daily wages.

The government warned that controls will be reimposed if the public fails to follow social-distancing guidelines.

In Spain, health authorities will allow certain regions to scale back their lockdowns starting Monday, with limited seating at bars, restaurants and other public places. But Madrid and Barcelona, the country’s largest cities, both badly hit by the scourge, will remain shut down.

“The pandemic is evolving favorably, but there is a risk of another outbreak that could generate a serious catastrophe,” Spanish health official Fernando Simón said. “Personal responsibility is vital.”

This year’s observance of Victory Day in Russia had been expected to be especially large because it is the 75th anniversary. Instead, Vladimir Putin laid flowers at the tomb of the unknown soldier, and a show of military might was limited to a flyover of 75 warplanes and helicopters.

Belarus, though, held a military parade in front of big crowds in the capital, Minsk, despite sharply rising coronavirus infections. Belarus has not imposed restrictions to halt the virus’ spread, and authoritarian President Alexander Lukashenko has dismissed concerns about it as a “psychosis.”

A fire at a Moscow hospital treating people infected by the coronavirus killed one patient and forced the evacuation of about 200 others. The cause of the blaze was not immediately determined.

Gera reported from Warsaw, Poland, and Forliti reported from Minneapolis. Associated Press journalists around the world contributed to this report.