In a coronavirus response riven by politics, masks are latest Rorschach test 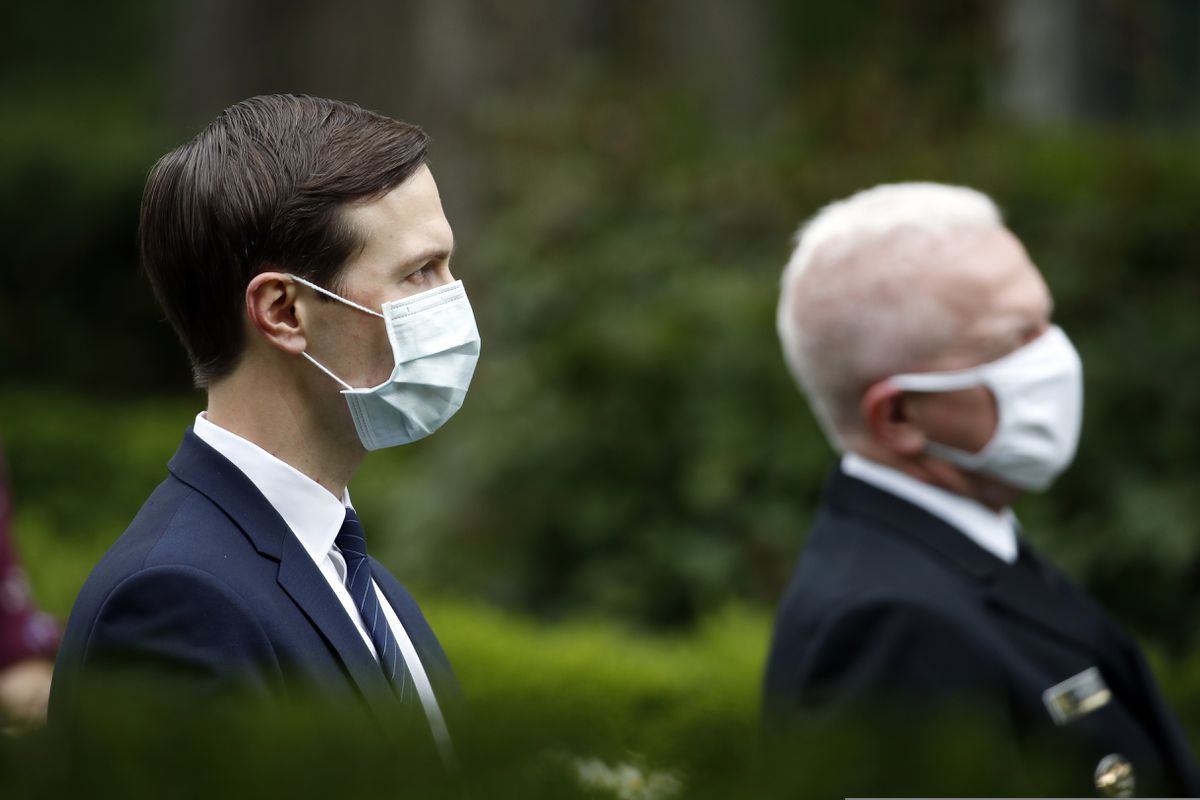 At the end of April, the three commissioners in West Virginia’s Monongalia County sent a letter to Gov. Jim Justice with a request.

Would he issue an executive order mandating the use of face masks in the county, which includes West Virginia University, for the 17-day period in May when 12,000 students and their family members were expected to stream back into town to recover their belongings from off-campus housing amid the coronavirus pandemic?

At first, the appeal seemed bipartisan.

The county commission's lone Democrat joined two Republicans to make the request. And West Virginia's top health officials backed it, with Clay Marsh, a physician coordinating the state's coronavirus response, telling the head of the university health system in an email, "I would personally want to do this for the entire state until we have a more definitive treatment or vaccine."

But Justice, a prominent ally of President Donald Trump who is moving to reopen the economy under the mantra, "West Virginia Strong," never responded. As a result, no face-covering requirements are in place as thousands descend on the campus - adding to the unease of some local leaders who worry that political considerations could make their community vulnerable to a spike in coronavirus cases.

"It's very, very disappointing," Tom Bloom, the Democratic commissioner, said of the governor's inaction. "To me personally, I think it's illogical."

But the episode has unfolded according to a blunt political logic that tracks with trends nationwide. With a presidential election fewer than six months away, questions about how politics is figuring in the response to the pandemic have hovered over everything from the allocation of medical supplies to the provision of federal aid to states to the decision to tell residents to stay at home.

[Most White House staff must wear masks, but rule won’t apply to Trump]

Face coverings, which became part of the administration's guidance only after internal debate between the White House and the Centers for Disease Control and Prevention (CDC), have emerged as a political Rorschach test. Republican leaders are less likely to mandate them, and Republican voters are more likely to forgo, and even scorn, them.

The White House waited until several aides close to Trump had tested positive for the novel virus to require masks or face coverings for its employees - in guidance that does not apply to the president. Of his decision to go barefaced, Trump said Monday, "In the case of me, I'm not close to anybody."

The ideological overtones of requiring masks have been growing louder for weeks. The coverings have taken on such potent social symbolism because, rather than being used solely for self-protection, they serve a more communal function: preventing users, including asymptomatic carriers, from infecting others. Some have chafed at shouldering that burden, decrying orders as government outreach.

In Pennsylvania, where Gov. Tom Wolf, a Democrat, has imposed among the most far-reaching statewide directives, requiring businesses to refuse entry to customers not wearing a mask, Russ Diamond, a Republican state lawmaker, recently celebrated shopping for toilet paper "sans mask," as he described his brazen act in a meme on Facebook. "So much winning," he added.

In Texas, the Democratic county judge in Harris County recently amended an order requiring masks after Gov. Greg Abbott, a Republican, made clear that he would not brook the imposition of fines for not heeding the guidelines.

"Did it become political? Yes," Lina Hidalgo, the county judge, said in an interview, noting that the penalty was mainly aimed at educating the public. She said she cheers the rollout of masks branded with Trump's reelection slogan, "Keep America Great," if it means broad compliance with the public-health precaution. "If folks want to express their opinion through a mask, that's fantastic," she said. "The line is when your political statement harms someone else's health."

[Fauci warns of ‘suffering and death’ if US reopens too soon]

In West Virginia, local leaders watching the brief return of students to the Morgantown community say they fear that politics may figure in the governor's lack of response to their request.

"I would hope that it isn't political, but it concerns me when I see that people are taking sides - and when the governor talks all the time about how he's such a supporter of President Trump, and we hear in the media that people don't want to get on the wrong side of the president," Bloom said. "Does that have a role in his decision?"

Bloom said the commissioners thought they lacked authority at the county level to mandate face coverings for the 17-day interval, especially after explicitly seeking the governor's intervention in an effort to "follow professional protocol."

In addition to the state's coronavirus coordinator, West Virginia Health Secretary Bill Crouch also backed the request. "I think it's great!" he wrote in email correspondence reviewed by The Washington Post.

A spokesman for Justice did not respond to a request for comment.

Polling points to a political schism over the issue. In a recent Gallup survey, 75% of Democrats reported wearing a mask outside their homes in the previous seven days, compared to 48% of Republicans who said the same.

Democrats are more likely to live in the dense urban areas where social distancing is impractical. As a result, the divisions over face coverings - which the CDC recommends "in public settings where other social distancing measures are difficult to maintain" - may be as much geographical as they are political, said Christina Baxter, the chief executive of a Virginia-based emergency response consultancy.

"If everybody wore masks, then it would provide a benefit," she said. "But where many people don't and then some others do, I'm not sure it really provides a whole lot of benefit."

Efforts to mandate widespread compliance have become extraordinarily vexed, with one dispute over face coverings, at a Family Dollar store in Michigan, litigated at the end of a barrel of a gun. Officials in Stillwater, Oklahoma, reversed course on an order requiring face coverings in stores and restaurants within hours of it taking effect because "store employees have been threatened with physical violence and showered with verbal abuse," according to a news release from this month.

The question of whether to wear a mask has proved challenging for some politicians.

Vice President Mike Pence expressed regret this month after not wearing one during a visit to the Mayo Clinic in Rochester, Minnesota, even though the facility requires them.

"It really is a statement about the American people, the way people have been willing to step forward, practice social distancing, wear masks in settings where they can't do that," Pence said. "As we continue to practice those principles, all of us together, I know we'll get through this."

The vice president is not the only prominent Republican to have struggled with the optics involved in the face coverings. Florida Gov. Ron DeSantis faced blowback when he let one of the straps of his N95 mask dangle below his chin during a public appearance.

Even Republican governors who have been scrupulous about modeling safe behavior have been reticent about compelling it of others. Ohio Gov. Mike DeWine quickly backed down from an order requiring face masks to be worn in stores, saying many in the state considered the measure "one government mandate too far."

That view is widely held by some of the president's most vocal online supporters, who have taken to Facebook and other online platforms to organize resistance to stay-at-home orders and other restrictions. More recently, they have taken aim at mandatory-mask rules, for instance compiling lists of businesses with no such rules and pledging to patronize only these establishments. "No mask required!" a user wrote this week of a restaurant in Phoenix, in a Facebook group devoted to reopening Arizona. "Great Italian food!"

Politics is no less at play in pro-mask dogma, said David Holt, the Republican mayor of Oklahoma City, who has encouraged residents to wear masks but has not required it.

"I posted a picture of myself with my family eating a picnic in a park, not within 100 feet of anyone," he said. "A couple of people replied, saying, 'Where's your mask?' "

Wearing a face covering, he said, has become a way to signal faith in medical expertise, while forswearing one "has become some sort of symbol of protest."

“This shouldn’t be an issue of which cable news station you watch,” he said. “The virus doesn’t care how you feel about the presidential election.”