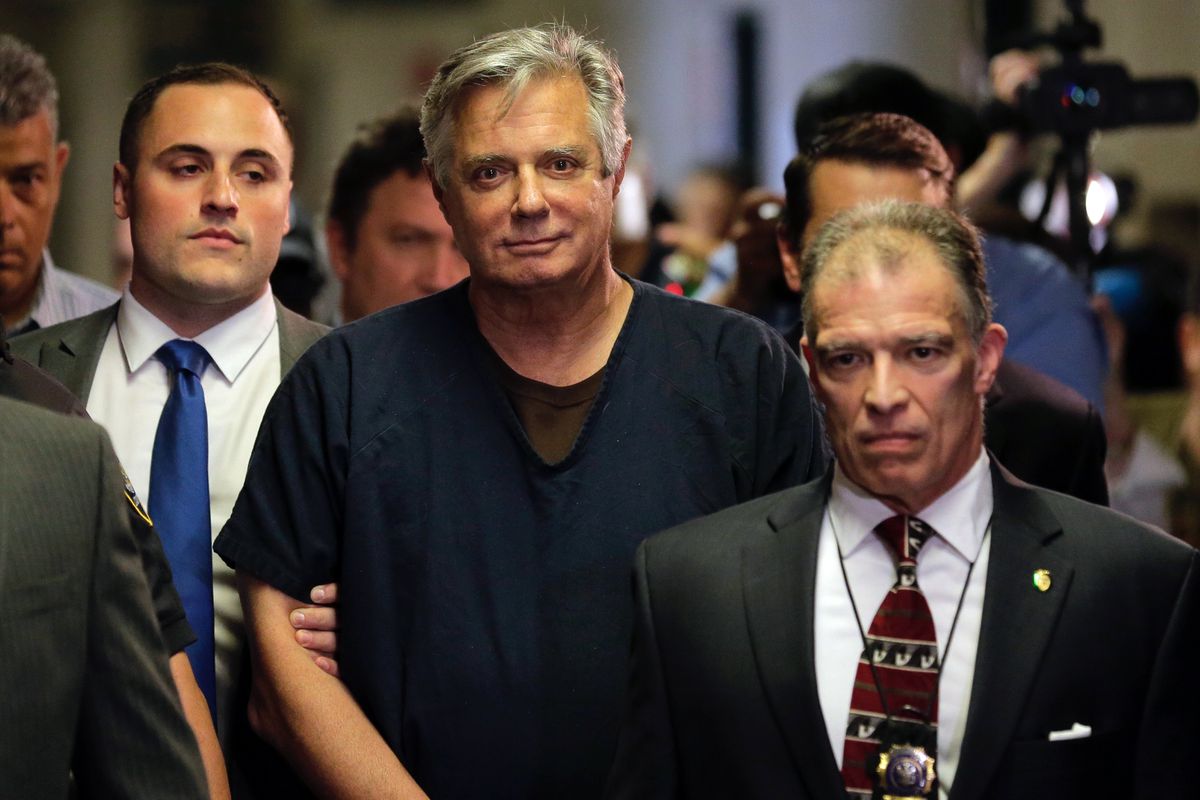 FILE - In this June 27, 2019 file photo, former Trump campaign manager Paul Manafort arrives in a New York court. Manafort has been hospitalized during his federal prison sentence. That’s according to two people familiar with the matter who couldn’t discuss the matter publicly and spoke to The Associated Press on condition of anonymity. (AP Photo/Seth Wenig, File)

FILE - In this June 27, 2019 file photo, former Trump campaign manager Paul Manafort arrives in a New York court. Manafort has been hospitalized during his federal prison sentence. That’s according to two people familiar with the matter who couldn’t discuss the matter publicly and spoke to The Associated Press on condition of anonymity. (AP Photo/Seth Wenig, File)

Paul Manafort, President Donald Trump’s former campaign chairman, has been released to serve his prison term under home confinement because of coronavirus fears, his lawyer confirmed.

Manafort had been imprisoned since June 2018 when he was indicted by special counsel Robert Mueller on a charge of witness tampering while awaiting trial on bank and tax fraud charges, for which he was convicted that summer. He later pleaded guilty to conspiracy to defraud the United States and obstruct justice related to his undisclosed lobbying for a pro-Russian politician and political party in Ukraine.

Manafort, serving a seven-year term, was released to his home in Alexandria, Virginia, from the minimum-security Lorretto Federal Correctional Institution in central Pennsylvania. His term was set to end November 2024. His release was first reported by ABC News.

Manafort's attorneys last April argued that, in light of the covid-19 pandemic, Manafort should be released to serve out at least a portion of that sentence with his wife in their northern Virginia condominium. His release was confirmed by attorney Todd Blanche.

Manafort was hospitalized for several days in December because of heart problems, they noted, and in February he contracted influenza and bronchitis. Given that history, the lawyers said that if he became infected with covid-19, "Mr. Manafort is at a significantly higher risk for serious illness or death."

Attorney General William Barr in late March directed the U.S. Bureau of Prisons to release to home confinement more vulnerable prisoners not considered a danger to the community.

The bureau has said they are "prioritizing for consideration" inmates who had served more than half their sentences or had 18 months or less remaining; Manafort is not in either category.

The U.S. Bureau of Prisons reported as of Tuesday that 2,818 inmates and 262 staff in its 140,000-prisoner system have tested positive for the virus, and 50 inmates have died. There have been no confirmed infections at the Loretto complex, according to the bureau.

The Bureau of Prisons has struggled to implement Barr's directive to release inmates to home confinement, issuing shifting guidance that apparently has not been applied uniformly. At times, the bureau has insisted that inmates must serve half their sentence before being eligible for release - even pulling back some people who had been told they would be let go and put in mandatory, prerelease quarantine.

More recently, the bureau issued guidance saying it would prioritize for release those who either had served half their sentence, or just 25 percent, if they had less than 18 months remaining. President Trump's former lawyer, Michael Cohen, who had been expecting his own release early this month, was prevented from departing because of those criteria,although he is still expecting to get out later this month, people familiar with the matter said.

The Justice Department has insisted, too, that the Bureau of Prisons has discretion to release inmates who do not meet those markers, particularly if they are at high risk of complications from coronavirus.

The Bureau of Prisons did not immediately respond to a message seeking comment.

Manafort's former deputy and co-conspirator, Rick Gates, had also asked to serve the rest of his 45-day intermittent prison term in home confinement. A federal judge instead suspended Gates's prison sentence in light of the pandemic.

Both Gates and Manafort landed in federal custody because of illegal lobbying work they did for Ukraine, taxes they failed to pay on $15 million in unreported income and bank fraud they committed when the business dried up. Gates pleaded guilty and testified against Manafort at trial; Manafort accepted a plea deal in D.C. federal court after being convicted on some charges in federal court in Alexandria.

Manafort served with Trump's campaign from spring until August 2016, when he resigned as chairman amid disclosures of his Ukraine role. He was later indicted in October 2017 by Mueller's team, which investigated - but did not charge him in connection with - his ties to Russian oligarchs and employment of an aide assessed by U.S. authorities to have links to Russian intelligence.

After his conviction in Virginia, Manafort pledged to cooperate with the Russia investigation. But a judge found he lied repeatedly to the special counsel’s team, and prosecutors sought prison time.