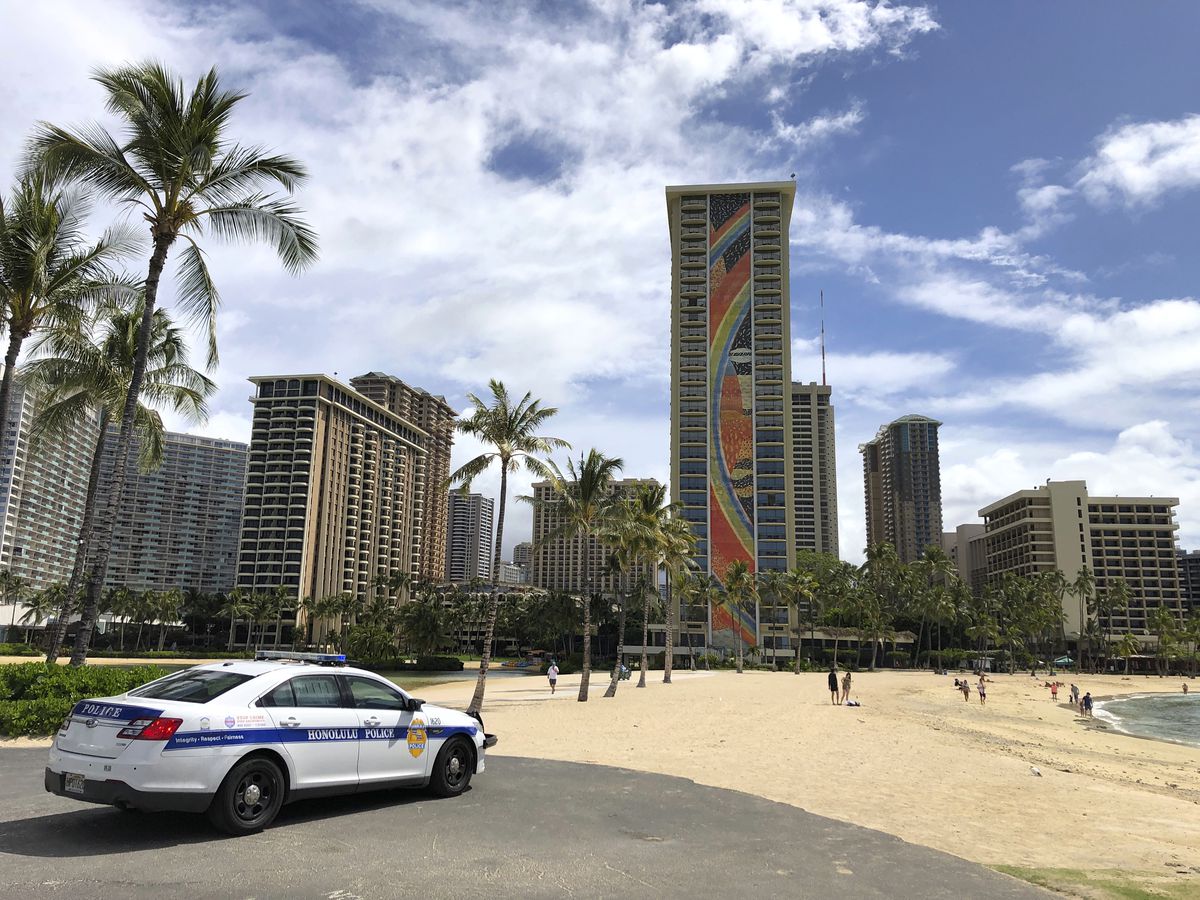 In this March 28, 2020, file photo, a police officer arrives to tell people to leave Waikiki Beach in Honolulu. Hawaii law enforcement authorities are cracking down on rogue tourists who are visiting beaches, jetskiing, shopping and generally flouting strict requirements that they quarantine for 14 days after arriving. (AP Photo/Caleb Jones, File)

In this March 28, 2020, file photo, a police officer arrives to tell people to leave Waikiki Beach in Honolulu. Hawaii law enforcement authorities are cracking down on rogue tourists who are visiting beaches, jetskiing, shopping and generally flouting strict requirements that they quarantine for 14 days after arriving. (AP Photo/Caleb Jones, File)

Monday’s “wanted” post on the Maui Police Department Facebook page included all the information one would expect: a photo, physical description, phone number to call with information. And a description of the Colorado woman’s alleged offense: “violating the Rules and Orders for failure to quarantine.”

According to police, the 31-year-old tourist arrived on Maui on Friday, acknowledged the state's mandatory 14-day quarantine and said she would be at a hostel. Later, authorities got a call that she had canceled her reservation; when efforts to reach her failed, police took their search public.

The visitor dragnet is the latest example of how seriously Hawaii - a destination that attracted more than 10 million tourists last year - is treating the coronavirus threat posed by outsiders as new cases in the state have dwindled. Between May 12 and Tuesday, nine new cases have been reported statewide.

Gov. David Ige, a Democrat, on Tuesday extended the two-week quarantine rule for all travelers who arrive in Hawaii through June 30. For visitors, the rule means no leaving their hotel room for any reason but medical care. No pool, spa or restaurant. No beach or shopping. Just room service and the same view for two weeks.

"You're looking outside and it's absolutely beautiful," says Jerry Agrusa, an associate professor in the School of Travel Industry Management at the University of Hawaii at Manoa. "It's like putting a kid in a candy store and not letting them buy anything. You can just look."

Arriving passengers have to sign an order to confirm that they know about the quarantine and understand that violating it is a criminal offense that could land them a $5,000 fine and a year in prison. They must also undergo a health screening and submit a form listing the place they're staying - authorities will check to confirm reservations - and contact information.

More than 90% of hotels that are open are issuing room keys that can only be used once, according to the Hawaii Lodging & Tourism Association. Its president and chief executive, Mufi Hannemann, urged members in a message on the website not to give guests any extra chances if they break the quarantine.

"There have been rumors circulating that hotels are not abiding by the single-use key agreement and giving a 'free pass' to guests," he wrote. "However, should you encounter a guest who has been locked out of their room due to the single-use key, or identify a guest that is not complying with the self-quarantine order, we ask that you immediately contact local law enforcement to report them."

There have been scofflaws. Some have been caught because, as one typically does in Hawaii, they posted their island activities on social media. A tourist from New York City who posted photos of himself on Instagram with a surfboard walking around Waikiki and sunbathing was arrested Friday by agents from the attorney general’s office.

And a California man was arrested by the same office Saturday as he prepared to leave Hawaii after allegedly posting images of himself at the beach, a garden and other locations on Oahu, as well as blogging from a bus.

In a statement, state Attorney General Clare Connors warned that most Hawaii residents would not tolerate anyone violating emergency rules.

"If you are out and about in violation of a self-quarantine order, it is likely you will be reported and arrested," she said. "We again implore visitors to delay their trips until this pandemic passes, and we ask that anyone who arrives here comply with the 14-day self-quarantine rule. Being arrested, and potentially paying thousands of dollars in fines or spending a night in jail, is not the way to begin or end a vacation."

According to the Hawaii Tourism Authority, an average of 963 people a day arrived in the state between May 12 and 18, compared with 30,000 a day a year earlier. Of those, about 273 a day were visitors.

Dan Dennison, a spokesman for the state's Covid-19 Joint Information Center, said this week that 10 visitors had been arrested by the Department of the Attorney General, and that county police departments were making other arrests.

"We continue to understand that enforcement is very important for both residents and travelers, and we continue to work with the counties to improve both the screening process as well as the enforcement process," Ige said during a news conference Monday. "Because we know that the quarantine can only be successful if the general public believes that there is enforcement and that anyone breaking quarantine would be subject to a fine or arrest."

A nonprofit that typically comes the aid of tourists in trouble, the Visitor Aloha Society of Hawaii, has been working since early April to return tourists home immediately - in some cases, buying plane tickets with grant money from the Hawaii Tourism Authority - if they arrive at the airport without a hotel reservation for the quarantine period and without money to buy a return ticket. For those who do have resources but do not want to quarantine, the organization will work with the airline to change their ticket to return home right away. President and chief executive Jessica Lani Rich said the group has sent 53 people back home so far.

"We want people to come to Hawaii when we're open for business again," she said.

Amir Eylon, chief executive of tourism-focused consultancy Longwoods International, said in an email that governments in destinations that depend on tourists such as Hawaii, New Zealand and Puerto Rico have been forced to make difficult decisions curbing visitors to protect their residents.

“While these acts by island destinations like Hawaii may seem to be anti-tourism, if they can avoid becoming a ‘hot zone’ for the pandemic and keep the incidence level low or even eliminate it, this may actually help their image as a safe destination for when the majority of states and other feeder markets ease restrictions on nonessential travel,” Eylon said. “Once folks begin traveling for leisure again, and start looking at long-haul destinations again, those that were successful in containing the coronavirus may very well be sought after more initially than those that struggled with the illness.”