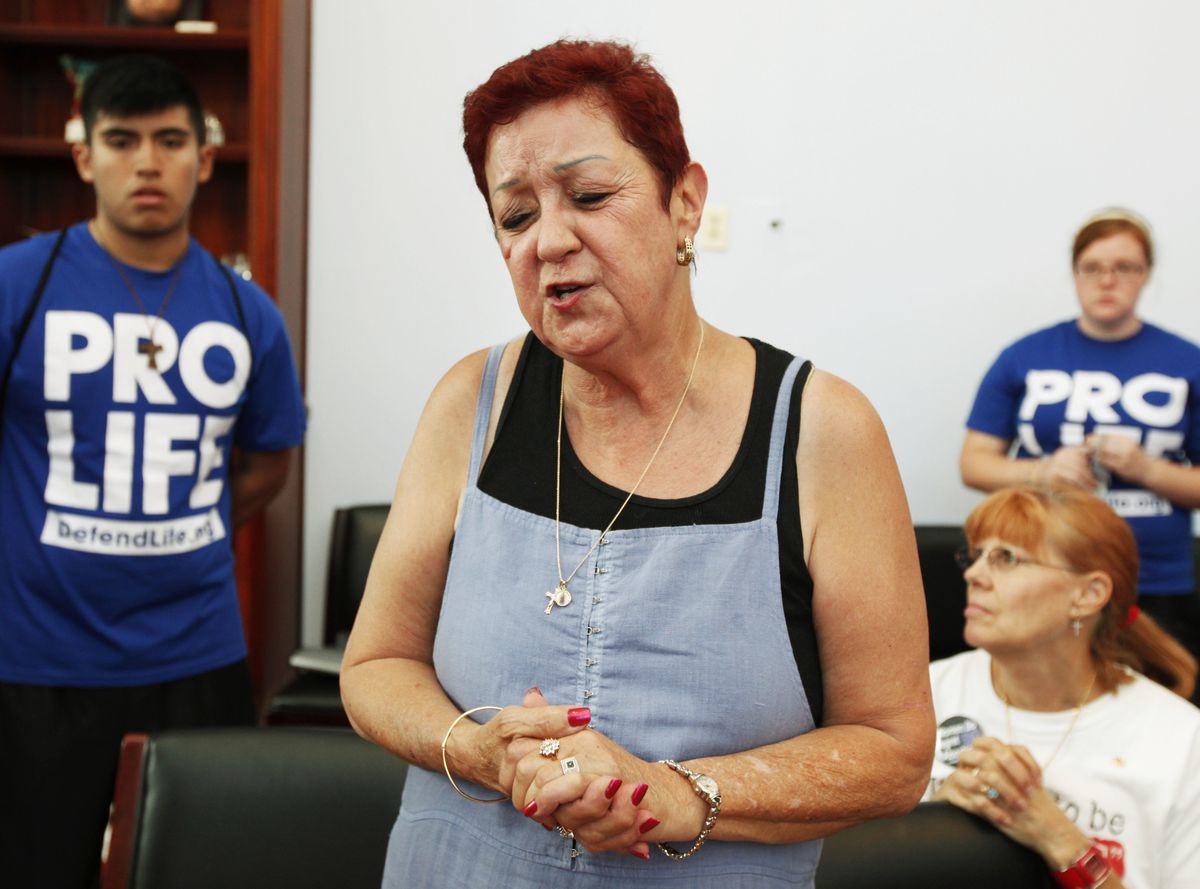 In this July 28, 2009, photo, Norma McCorvey, the plaintiff in the landmark lawsuit Roe v. Wade, speaks up as she joins other anti-abortion demonstrators inside House Speaker Nancy Pelosi's office on Capitol Hill in Washington. (AP Photo/Manuel Balce Ceneta)

In this July 28, 2009, photo, Norma McCorvey, the plaintiff in the landmark lawsuit Roe v. Wade, speaks up as she joins other anti-abortion demonstrators inside House Speaker Nancy Pelosi's office on Capitol Hill in Washington. (AP Photo/Manuel Balce Ceneta)

A scrappy, abused 10-year-old girl who robbed a Texas gas station in 1957 and ran away to hide in an Oklahoma City motel would grow up to change American history.

"I am a rough woman, born into pain and anger and raised mostly by myself," wrote Norma McCorvey, in one of her two memoirs, "I Am Roe."

In a documentary about her life, "AKA Jane Roe," which premieres Friday on FX, she made the deathbed confession in 2017 that her later-life fight against abortion rights was all an act that she was paid handsomely for by antiabortion activists.

That jaw-dropping flip-flop in the late 1990s, after she revealed her identity and began fighting the legal case named for her, was hailed as a victory by the antiabortion movement.

And it all goes back to the self-esteem and self-preservation of an abused girl running from the adults who failed to protect her.

That heist by 10-year-old Norma Leah Nelson - born in Pointe Coupee Parish, Louisiana, and uprooted to Texas when she was 9 - ended when a housekeeper at the Oklahoma City motel where she holed up with a friend opened the door and found the two girls kissing, according to her memoir.

She was sent back to Texas and into a Catholic reformatory school, where she was sexually abused by a nun, she wrote.

After leaving the reformatory, she was sent to live with a distant relative of her mother. That man raped her, she wrote. She returned to Dallas at 15, where she was working at a drive-in burger joint when she met her husband, occasional steelworker Woody McCorvey, according to her memoir.

When she became pregnant, McCorvey beat her, she wrote. She left him, had the baby and came to terms with her sexual identity. She was a regular at the Red Devil lesbian bar in Dallas after moving back in with her mom. But grandma didn't agree with her daughter's life and took the baby, allegedly tricking McCorvey into signing adoption papers to give up her parental rights, according to the book.

By that time, McCorvey was in a serious relationship with a woman but had a tryst with a male colleague, which led to her second pregnancy. That child was put up for adoption.

McCorvey was a 21-year-old financially unstable high school dropout when she became pregnant a third time. It was 1969 and she was in the crowd dropping acid, not waving signs at political rallies.

Her next move wasn't about making a political statement; she was only looking for an abortion when someone gave her the names of two lawyers - Linda Coffee and Sarah Weddington.

The lawyers were looking for a plaintiff to fight for women's right to safe and legal abortions. Connected and wealthy women could get illegal abortions in Texas, or they traveled to other places for the procedure. That wasn't an option for someone like McCorvey. At the time, she seemed like the perfect poster child for the cause. So when the three of them sat down in a Dallas restaurant in February 1970, Jane Roe was born.

Roe v. Wade was a class-action lawsuit challenging the constitutionality of the Texas laws criminalizing abortion, against Henry Wade, the Dallas district attorney. It made it to the Supreme Court, which established the constitutional right to an abortion in 1973.

McCorvey never had her abortion. She had the baby and put the child up for adoption, again.

It was that messy backstory that became a problem.

When she tried to attend abortion rights protests, she said, she felt as though the movement never embraced her.

Women's rights luminaries "were supposed to look like suburban wives," said David Garrow, the Pulitzer Prize-winning author of "Liberty and Sexuality: The Right to Privacy and the Making of Roe v. Wade."

An uneducated, colorful, carnival-barking lesbian didn't exactly fit with the high-minded feminist narrative of the time.

She was invited to an abortion rights rally and felt ignored.

"They never gave me the respect I thought I deserved," McCorvey said in a 1995 television interview on "Nightline."

"I felt increasingly alienated" from the abortion rights movement, McCorvey wrote in her second memoir, "Won By Love," in 1997.

She was working at an abortion clinic in a Dallas strip mall in the early 1990s when she met Philip Benham, an evangelical minister who opened up an Operation Rescue office in that same strip mall. It's one of the group's tactics to divert women going to clinics.

It was a time in McCorvey's life when she felt used, ignored and marginalized by the movement to keep abortion legal. She was ready for a sympathetic ear, and a friend.

Benham became that friend. He baptized her in a Dallas pool in 1995, and she began speaking against abortion alongside him, calling herself a born-again Christian.

She spent the rest of her life fighting against Roe v. Wade, which was a huge victory for antiabortion activists.

As she was dying in 2017, she flipped again, saying it was all an act, according to the documentary and first reported by the Los Angeles Times.

"I was the big fish. I think it was a mutual thing. I took their money, and they'd put me out in front of the cameras and tell me what to say. That's what I'd say," she says in "AKA Jane Roe." "It was all an act. I did it well, too. I am a good actress."

In the documentary, McCorvey restates her support for reproductive rights: “If a young woman wants to have an abortion, that’s no skin off my ass. That’s why they call it choice.”