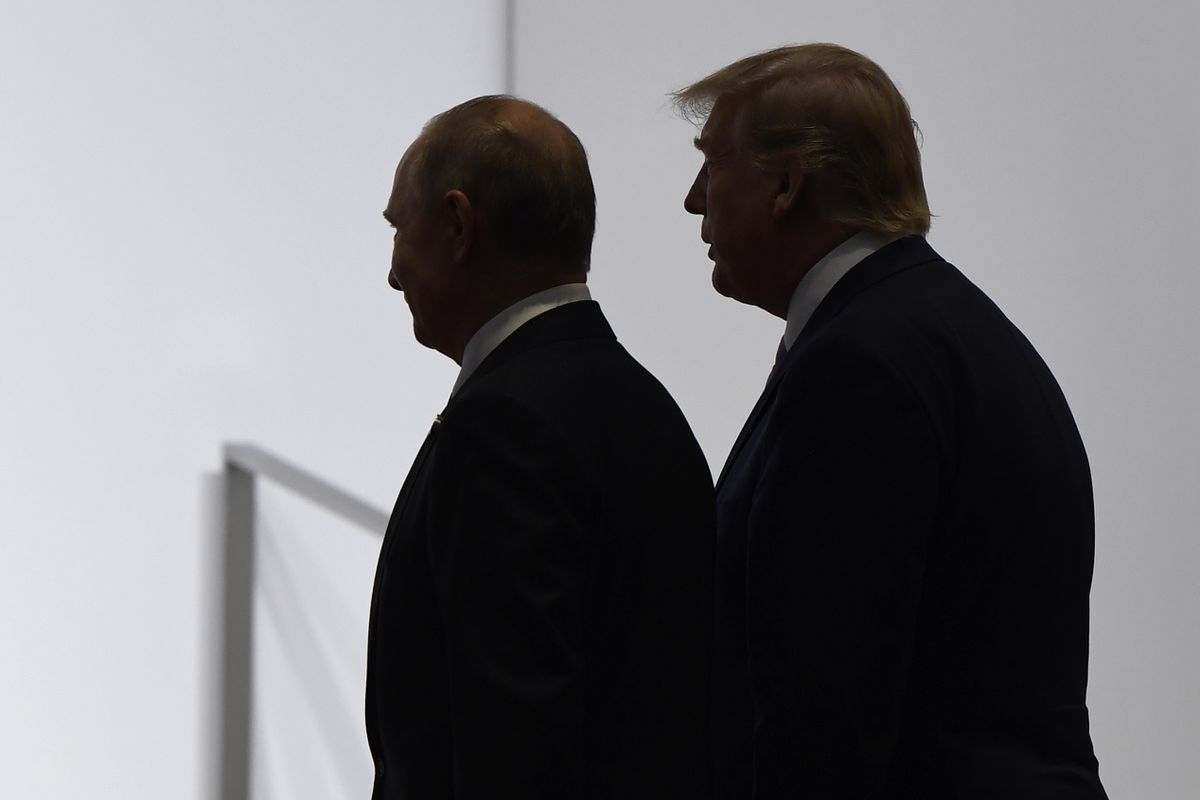 In this June 28, 2019, photo, President Donald Trump and Russian President Vladimir Putin walk to participate in a group photo at the G20 summit in Osaka, Japan. The Trump administration is notifying international partners that it is pulling out of a treaty that permits 30-plus nations to conduct unarmed, observation flights over each other’s territory — overflights set up decades ago to promote trust and avert conflict. The administration says it wants out of the Open Skies Treaty because Russia is violating the pact and imagery collected during the flights can be obtained quickly at less cost from U.S. or commercial satellites. (AP Photo/Susan Walsh, File)

In this June 28, 2019, photo, President Donald Trump and Russian President Vladimir Putin walk to participate in a group photo at the G20 summit in Osaka, Japan. The Trump administration is notifying international partners that it is pulling out of a treaty that permits 30-plus nations to conduct unarmed, observation flights over each other’s territory — overflights set up decades ago to promote trust and avert conflict. The administration says it wants out of the Open Skies Treaty because Russia is violating the pact and imagery collected during the flights can be obtained quickly at less cost from U.S. or commercial satellites. (AP Photo/Susan Walsh, File)

WASHINGTON - The Trump administration began privately informing allied nations this week that the United States will withdraw from a nearly 30-year-old treaty designed to reduce the chances of an accidental war between Russia and the United States by allowing reconnaissance flights over the two countries, according to diplomats familiar with the discussions.

A withdrawal from the Treaty on Open Skies risks driving another wedge between the United States and its European allies, some of which urged the United States to remain in the pact in recent weeks despite U.S. concerns about Russian compliance.

President Donald Trump told reporters on Thursday that he's pulling out because Russia didn't adhered to the treaty, but he left the possibility open of returning to the agreement or forging a new one.

"Russia didn't adhere to the treaty, so until they adhere, we will pull out, but there's a very good chance we'll make a new agreement or do something to put that agreement back together," he said on the White House lawn before flying to Michigan.

The president's national security adviser, Robert O'Brien, issued a statement saying that the United States will try to forge a new arms-control agreement with Russia and China, although Beijing has been cool to U.S. overtures.

The treaty emerged out of a proposal that President Dwight Eisenhower initially suggested to the Soviets to promote transparency about military surveillance overflights.

The Soviet Union rejected his offer but President George H.W. Bush revived the idea and the multicountry pact was signed after the fall of the Soviet Union in 1992. It came into force in 2002, after the 20th nation ratified the agreement.

Today, the treaty includes 34 countries and allows each to carry out reconnaissance flights over one another's territory on short notice to gather information about military activities.

The Trump administration has argued that Russia is violating the agreement. In March, Defense Secretary Mark Esper said Russia had blocked the United States from flying reconnaissance missions over the exclave of Kaliningrad on the Baltic Sea and the southern border with Georgia.

"They have been cheating for many years," Esper said during testimony before the Senate Armed Services Committee.

Advocates of the treaty said a U.S. withdrawal would be counterproductive.

"The problems we were having with Open Skies did not defeat the object and the purpose of the treaty," said Alex Bell, a senior director at the Center for Arms Control and Non-Proliferation. "It never appeared like the Trump administration was really trying to fix these compliance problems. It seems like they only know how to break things."

The U.S. decision to withdrawal was expected to come up at a lunch in Washington on Thursday between Russian Ambassador Anatoly Antonov and Christopher Ford, a senior State Department official in charge of arms control.

"Unfortunately, this is not the first blow to international stability and security being inflicted by the U.S. administration," Russian Foreign Ministry spokeswoman Maria Zakharova said on the state-run Rossiya-24 television channel.

European allies have been briefed during meetings with U.S. officials at the Pentagon and the State Department. Some diplomats were told that the United States may still salvage the treaty if Russian behavior changes, but they said the U.S. intention to withdraw seemed clear.

The State Department and the Pentagon did not respond to requests for comment.

A withdrawal from the Treaty on Open Skies will mark another example of the erosion of an arms-control framework that Washington and Moscow hashed out painstakingly over the course of the Cold War and after the Soviet collapse.

In 2002, the George W. Bush administration abrogated the Anti-Ballistic Missile Treaty with Russia, paving the way for a U.S. missile defense buildup in Europe. Last year, the Trump administration pulled out of the Intermediate-Range Nuclear Forces Treaty, or the INF Treaty, with Russia, citing Russian violations.

Beyond those pacts, Sen. Tom Cotton, R-Ark., has pushed for the Trump administration to withdraw from the Comprehensive Nuclear Test Ban Treaty, which has yet to enter into force, as well as the Treaty on Open Skies. He has argued that the pact is giving Russia spying capability that Moscow wouldn't otherwise possess, and that it doesn't give the United States any intelligence that isn't available elsewhere."Like so many treaties with Russia, the Open Skies agreement was negotiated and signed with good intentions, then abused by Moscow for maximum advantage," Cotton wrote late last year in an op-ed piece in The Washington Post.

Cotton praised the Trump administration's decision Thursday, but some Republican elder statesmen criticized the move, including Gen. Michael Hayden, a senior intelligence official in the George W. Bush administration. "This is insane," he tweeted, adding that he previously served as CIA director.

Russia has denied violating the treaty. Russian Foreign Minister Sergey Lavrov said in April that the Trump administration is averse to any limits on its military, particularly over U.S. territory.

"The Americans, the current administration, conceptually, fundamentally have an aversion to any kind of control over American military activity, especially when that control is exercised on or over U.S. territory," Lavrov said. He said he doubted that other countries would withdraw.

"Will other countries follow the Americans? I doubt it," he said. "Europeans seem to me to understand that the agreement has added value as an instrument of trust, an instrument of predictability, transparency, and that is how we see it."

The last remaining main pillar of the arms-control framework between the United States and Russia is the New START pact, signed by Presidents Barack Obama and Dmitry Medvedev in 2010. The agreement, which places limits on strategic nuclear platforms such as bombers, submarines and intercontinental ballistic missiles, will expire in February. It can be extended for five years without any ratification if the U.S. and Russian presidents both agree.

Russian President Vladimir Putin has said he wants to extend the pact, but the Trump administration has balked, describing it as outdated and lacking in proper oversight.

The Trump administration has been pushing to negotiate a follow-on agreement that includes China in addition to Russia, but China has rejected its calls for talks. If the pact is not renewed, the world will return to an era without any legally binding or verifiable limits on its two biggest nuclear powers for the first time since 1972.

The impending U.S. withdrawal from the Open Skies Treaty is part of a broader debate about how Washington should approach legacy arms-control agreements with Russia that have eroded in recent years because of violations or outdated mechanisms in the treaties themselves.

Led by former White House national security adviser John Bolton, the Trump administration has moved quickly to rip them up, arguing that there's no sense in remaining in treaties if Russia isn't going to comply and that only by withdrawing can the United States lay the groundwork for new deals calibrated to the modern era.

Members of the arms-control community, however, has argued that these pacts took a long time to negotiate and Washington may not be able to agree on any substantive follow-on pacts with Moscow. They say the administration should exhibit more caution, act in concert with allies and hold on to agreements even if they are flawed while trying to improve them. Ripping them up, they argue, serves only to make the world more dangerous.

"Trashing the legacy of respected Republican presidents like Eisenhower and G.H.W. Bush will put President Trump in the rarefied territory of being the only U.S. leader to have abandoned three arms-control treaties and created none," Bell said.

The Washington Post’s Isabelle Khurshudyan in Moscow contributed to this report.