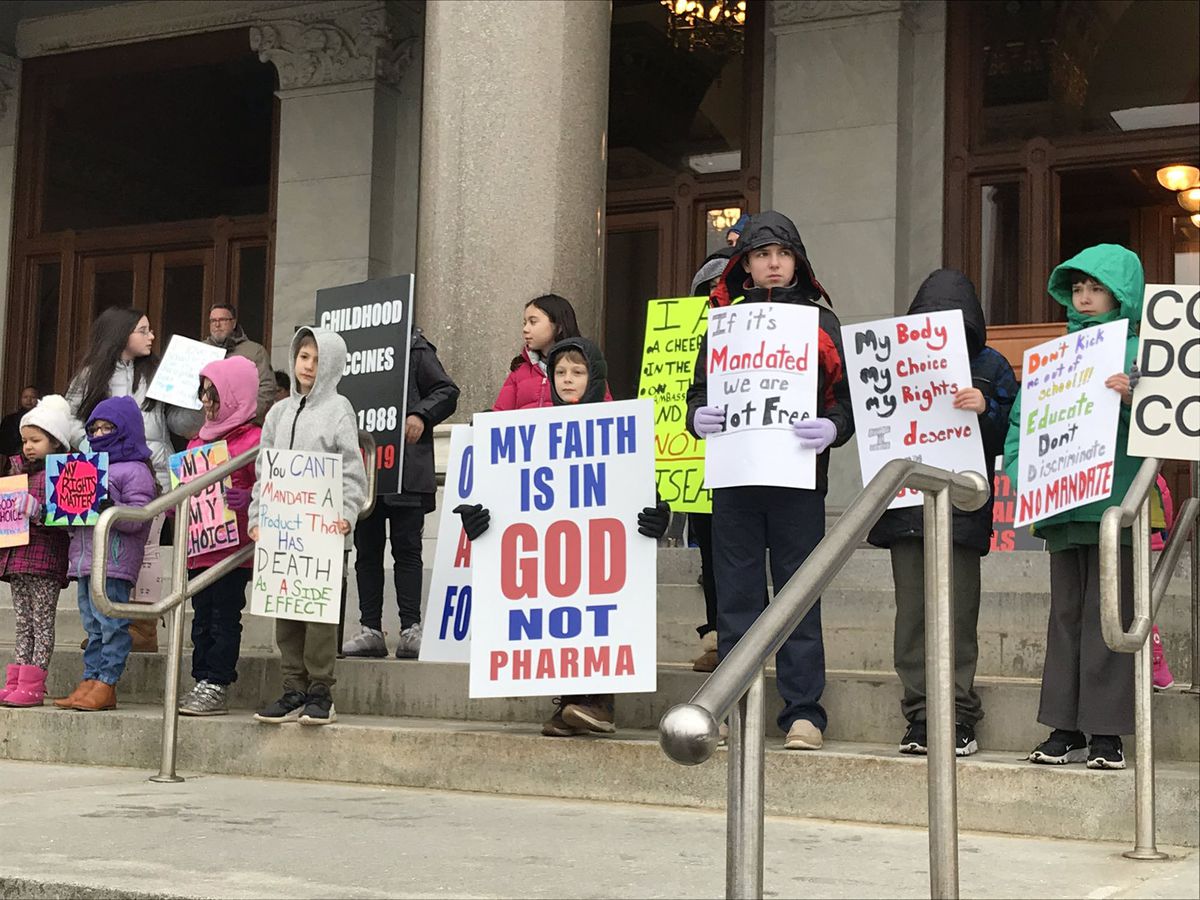 Protesters at the Connecticut state capitol demonstrate against a bill to end the state's religious exemption to vaccination for school-age children. (Brad Horrigan/Hartford Courant/TNS)

Protesters at the Connecticut state capitol demonstrate against a bill to end the state's religious exemption to vaccination for school-age children. (Brad Horrigan/Hartford Courant/TNS)

The question was posed bluntly to the nearly 100,000 members of a Facebook group devoted to ending Pennsylvania’s stay-at-home orders, with a user writing, “if there was a vaccine for coronavirus would you be likely to take it.”

The resoundingly negative answers streamed forth, generating 1,700 comments and providing a window into brewing resistance to a potential coronavirus vaccine that experts say offers the surest path back to normal life.

Some of the same online activists who have clamored to resume economic activity, echoing President Donald Trump's call to "liberate" their states from sweeping restrictions, are now aligning themselves with a cause on the political fringe - preemptively forswearing a vaccine. To further their baseless claims about the dangers of vaccines and to portray the scientific process as reckless, they have seized on the brisk pace promised for the project, which the Trump administration has branded "Operation Warp Speed."

"We're looking to get it by the end of the year if we can," the president said Friday

Both movements represent the views of a small minority of Americans. But leading medical experts fear that the ability of their adherents to spread misinformation online could plant seeds of confusion and distrust in the broader public - and undermine future efforts to distribute a vaccine.

Anthony Fauci, director of the National Institute of Allergy and Infectious Diseases, said he has grown increasingly concerned that the name of the initiative has led to misconceptions about what is being put at risk by speeding up the effort - only financial investments, not safety or efficacy.

"People don't understand that, because when they hear 'Operation Warp Speed,' they think, 'Oh, my God, they're jumping over all these steps and they're going to put as at risk,' " Fauci said in an interview Wednesday with The Washington Post.

No steps would be eliminated, he vowed. Rather, multiple steps - from collecting data to preparing to scale up the number of potential doses - would be pursued at once, creating "risk for the investment" but not for the patient or the "integrity of the study."

"You're doing things in a totally unprecedented way, and you're going really fast but not compromising safety because you haven't cut out any of the steps you would have done had you done it the traditional way," Fauci said.

But such guardrails have gone unmentioned on some of the most active platforms for coordinating opposition to measures designed to slow the spread of the virus. One participant in a 2,000-member reopening group on Facebook suggested Trump was "pandering to the left" by speeding a vaccine to market. Another, addressing more than 26,000 fellow users, called the effort "mad," linking to a video outlining a conspiracy theory about Bill Gates.

The views, though they reflect an extreme position, are a sign of looming obstacles to public trust for the Trump administration and governments around the world rushing to complete a process in a matter of months that typically takes years. In a Yahoo News-YouGov poll this month, nearly 1 in 5 Americans said they would not take a coronavirus vaccine.

The online activity illustrates how anti-vaccine stalwarts have found common cause with those protesting stay-at-home measures, flocking to their demonstrations and staging their own. The two movements are also drawing on a common online organizing infrastructure, increasingly merging in the fluid corners of Facebook.

Their groups and pages, which frequently boast followings in the six figures, easily swap out one target of perceived government overreach for another, in an early sign of how misinformation could thwart efforts to immunize the public from a disease that has killed 90,000 Americans.

Matthew Ferrari, an epidemiologist at Pennsylvania State University, said there were already indications that anti-science sentiment flaring in the early days of the pandemic could be "eroding confidence in existing vaccines."

A study released by the Centers for Disease Control and Prevention found that vaccination rates for children in Michigan fell steeply in May, including to fewer than half of infants 5 months or younger. Reduced access to immunizations could have been a result of the stay-at-home order designed to contain the outbreak, the report noted, though the state order halting elective procedures did not specifically include vaccinations.

The decline in up-to-date status for recommended vaccines threatens herd immunity against highly contagious infectious diseases such as measles, the CDC warned. Ensuring the interruption does not become permanent is a priority, Ferrari said, requiring clear science communication.

Peter Hotez, a professor of pediatrics and dean of the National School of Tropical Medicine at the Baylor College of Medicine in Houston, said his initial modeling suggests "a significant number of Americans" will need to be vaccinated against the coronavirus to interrupt transmission.

"I'm worried that the anti-vaccine movement is going to be so strengthened to the point where we won't have those numbers, and part of this may just be people opting out because of mixed messaging," he said. "You'd think the anti-vaccine movement would go into retreat with everyone wanting a vaccine, but it's been energized over 'Operation Warp Speed' and over biotech and pharma companies sending out irresponsible news releases."

The central tenets of the anti-vaccine movement, Hotez said, are that vaccines cause autism, which they do not, and, "second, that vaccines are rushed, third that they're not adequately tested for safety and fourth that there's an alliance between the federal government and the pharmaceutical companies."

"This 'Operation Warp Speed' plays right into three of those four things, and there's been no attempt to refute that messaging," he said.

Michael Caputo, a longtime Trump adviser tapped to lead communications for the initiative as the freshly minted head of public affairs at the Department of Health and Human Services, said he was responsible for the branding. He drew the name "Operation Warp Speed" from the terminology scientists were already using internally to describe their efforts, he said, after initially toying with names from Greek and Roman mythology but struggling to find a fitting title.

Of efforts to paint the process as overly hasty, Caputo said, "This is a concern that everyone in the operation is taking to heart." A White House spokesman declined to comment.

The protests against a possible vaccine extend far beyond the group focused on Pennsylvania. A similar question appeared in a Facebook group dedicated to reopening Arizona, where a user suggested that resisting a vaccine was a reason "to keep this Facebook group strong and going," even as states begin to lift their stay-at-home orders. "Will you take it?" she asked. Among answers spouting debunked theories about the dangers of vaccines, one user weighed in to say she was newly skeptical, in light of how the development process was proceeding.

"Although I have been vaccinated myself and vaccinated my kids for the typical childhood diseases (and have no issue with that) the thought of a vaccine being rushed through trial and forced on us makes me very nervous," she wrote.

On Twitter, more than three-quarters of posts since Monday using the hashtag #OperationWarpSpeed have pushed conspiracy theories about the effort. Others suggested hydroxychloroquine was a more suitable option, even though the Food and Drug Administration has warned of the antimalarial drug's possible side effects. Trump on Monday said he was taking the drug as a preventive measure, prompting some of his supporters to double down on the unproven drug, which has been linked to increased risk of death for certain patients.

"I would take Trump's hydroxychloroquine . . . before I would be vaccinated by the left's new covid-19 vaccine!" read a meme posted Tuesday in a pro-Trump Facebook group with more than 82,000 members.

Brad Parscale, who is managing the president's reelection campaign, also touted the drug after the president's revelation about taking it. On Twitter, he shared a news release from the Association of American Physicians and Surgeons, a right-wing group that has lobbied in favor of broader exemptions from inoculation requirements for religious and other beliefs. Its periodical has published reports falsely tying child vaccination to autism and advancing a discredited link between abortion and breast cancer.

A spokesman for the Trump campaign did not respond to a request for comment. Jane Orient, the group's executive director, said AAPS contends that "vaccines should be fully tested and voluntary."

Similar views animate an online petition against a mandatory coronavirus vaccine sponsored by LifeSiteNews, a right-wing website that the fact-checking website Snopes calls a "known purveyor of misleading information." The petition, which has racked up nearly half a million signatures, has been posted in some of the largest "reopen" groups on Facebook.

Hotez said the activity showed Facebook is not doing enough to weed out dangerous misinformation putting public health at risk.

Changes introduced by the technology giant last year were aimed at surfacing authoritative content about vaccines, including by altering what sort of pages and groups appear in the News Feed and search features. Andrea Vallone, a Facebook spokeswoman, pointed to a March news release from Nick Clegg, the company's vice president for global affairs and communications, saying, "We remove COVID-19 related misinformation that could contribute to imminent physical harm."

Misinformation about vaccines is still rampant on the platform, said Kolina Koltai, a postdoctoral scholar at the Center for an Informed Public at the University of Washington who has been studying anti-vaccine groups on Facebook for five years. She first learned about the coronavirus in January, she said, because the online communities she tracks were already portraying the outbreak as a tool of government control.

The conspiracy theories that sow distrust of immunization rely on some well-founded concerns about profit and the role of industry, she said.

Moncef Slaoui, a former Moderna executive tapped to lead the White House's vaccine initiative, on Tuesday divested his stock options in the Massachusetts biotechnology company, which a day earlier had announced promising early results from its first human safety tests. Moderna did not respond to a request for comment.

"The anti-vaccine movement is really good at drawing people in," Koltai said. "They'll use whatever half-truth or slogan they can to convince people of their conspiracy beliefs."

The Washington Post’s Carolyn Y. Johnson contributed to this report.