Little sense of shared grief as virus deaths near 100,000 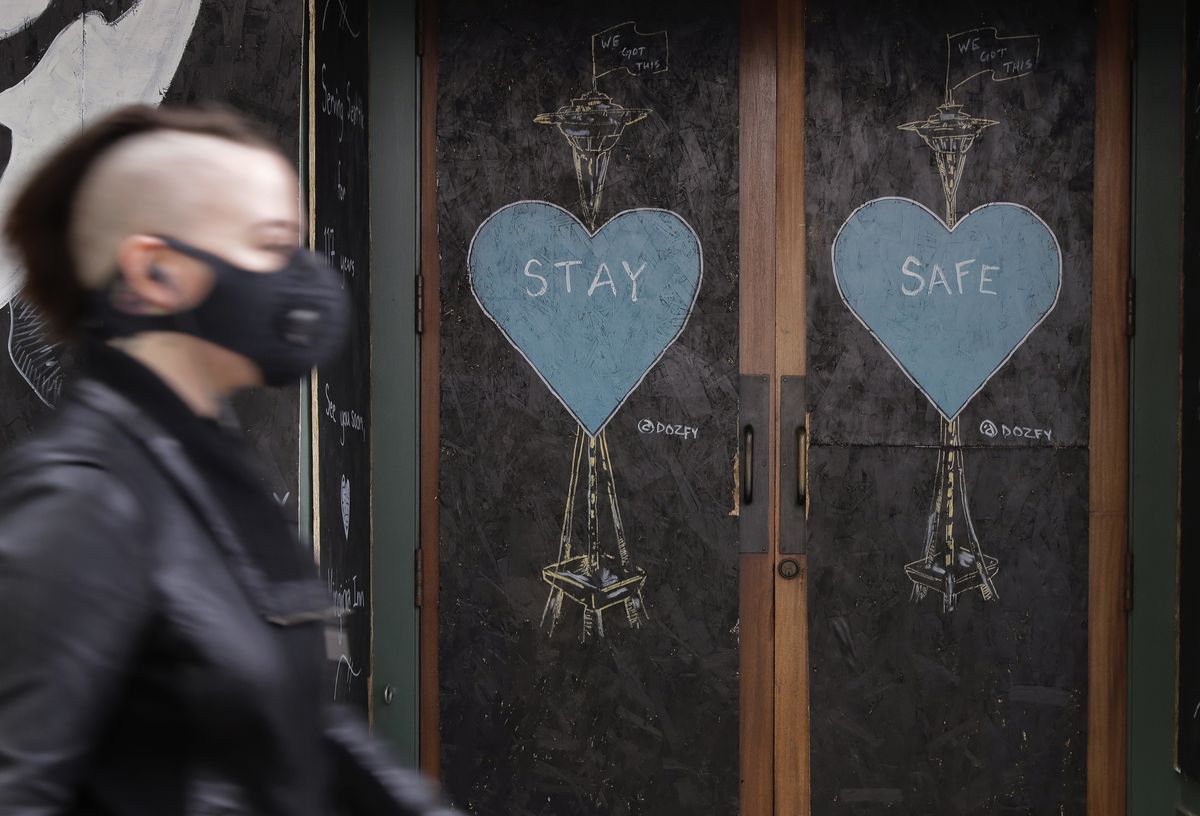 A pedestrian wearing a face mask walks past art by the street artist @dozfy, featuring the Space Needle on the boarded-up Virginia Inn Restaurant and Bar, Saturday, May 16, 2020, in downtown Seattle. On Saturday, officials reported that Washington state had reached the grim milestone of 1,000 deaths from the coronavirus. (AP Photo/Ted S. Warren)

A pedestrian wearing a face mask walks past art by the street artist @dozfy, featuring the Space Needle on the boarded-up Virginia Inn Restaurant and Bar, Saturday, May 16, 2020, in downtown Seattle. On Saturday, officials reported that Washington state had reached the grim milestone of 1,000 deaths from the coronavirus. (AP Photo/Ted S. Warren)

WASHINGTON — For months after the Sept. 11 terrorist attacks, the nation ached together in televised memorials, joining in a collective catharsis of uniformed salutes, bagpiped dirges and President George W. Bush declaring a national day of mourning and remembrance.

The space shuttle Challenger explosion in 1986 turned classrooms into grieving sessions, with President Reagan directly addressing the national wounds. The Japanese attack on Hawaii’s Pearl Harbor in 1941 was a day that President Franklin D. Roosevelt said would live in “infamy,” uniting the mainland to enter a world war.

Yet as the nation nears 100,000 deaths from COVID-19 — far more than all those tragic events combined or the entire Vietnam War — there is little sense this Memorial Day weekend that Americans are grieving together or uniting in a sense of purpose.

While Americans have shared undeniable hardships since March — including more than 38 million people forced to file for unemployment, and tens of millions more forced to hunker down at home to avoid the contagion — the carnage is hitting them unevenly.

President Donald Trump, loath to dwell on those dismal figures, is both stoking the polarized response and counting on a fragmented experience to distract the nation from the almost incomprehensible death toll — nearly triple that of any other country — which could tar his presidency and jeopardize his chance for reelection in November.

“I don’t think we’re taking this in,” said David Kessler, an author of six books on grief.

“It’s easy to digest a statistic. It is not easy to digest 12 plane crashes a day,” Kessler said. “Especially when there are no visuals. We aren’t seeing 90,000 caskets. That kind of stuff would shock us. Maybe this is too big for us to comprehend.”

In this hyper-partisan era, opposing camps have found a way to bicker over the dead as just another talking point, especially as Trump has cast criticism of his administration’s response as driven purely by politics.

Still, the two sides reached a rare accord Thursday after House Speaker Nancy Pelosi (D-Calif.) and Senate Minority Leader Charles E. Schumer (D-N.Y.) asked Trump in a letter to lower U.S. flags to half-staff this weekend as a tribute to the dead. Trump tweeted hours later that he would do just that for three days “in memory of the Americans we have lost to the coronavirus.”

During a visit to a Ford Motor Co. factory in Michigan earlier Thursday, Trump read from prepared remarks, saying “we hold in our hearts the precious memory of every person that we have lost, and we’ve lost too many” in a speech otherwise peppered with political boasts and gibes.

But earlier this week, with the elderly most at risk from COVID-19, he dismissed some of the deceased as “very old, almost dead” and sought to frame the ever-rising fatality count as evidence of a successful government response, arguing that “millions” more would have perished had the government not mobilized at all.

Critics have lambasted his administration’s response as slow, callous and incompetent. And new estimates by Columbia University researchers concluded that social distancing orders even a week earlier in March would have saved 36,000 lives, or more than a third of the fatalities so far.

“Very few people knew anyone who died on 9/11, but it was not ‘those people,’” said Cornell Belcher, a pollster who worked for President Obama and other Democrats. “It was all of us.”

“That’s not happening this time around,” he said. “There are two sides driving their own narratives.”

Black, Latino and other racial and ethnic minority groups have been hit especially hard by the virus, partly due to greater likelihood of preexisting medical conditions and lower access to healthcare, especially in poor communities.

The deaths have been highest in Democratic-leaning coastal states like California and New York, and crowded urban centers like Detroit, Chicago and New Orleans, where hospitals were initially overwhelmed. Most have seen a dramatic drop in admissions in recent days.

While the contagion has spread to more rural, more conservative areas, many of those stricken so far are immigrants who work in meatpacking plants, inmates in prisons and residents in nursing homes and other elder-care facilities. Many cannot vote.

Democrats have tried to draw attention to the deaths and in some case use them as a political cudgel against Trump in the presidential race.

A super PAC aligned with Rep. Eric Swalwell (D-Dublin) launched an ad this week that interspersed images of Trump golfing and downplaying the disease while a woman emotionally recounts her father’s death and a ticker tallies the growing fatalities.

“In November, we are literally voting for our lives,” the woman says.

Trump has focused on numbers throughout the crisis.

Early on, he assured Americans that infections would drop to zero and dismissed the disease as no worse than the flu. He said publicly that he was reluctant to allow a cruise ship to dock with infected American passengers because it would make the nation’s case count rise.

He has repeatedly accused China’s authoritarian government of downplaying its national death toll, while his allies question whether the U.S. numbers are inflated; evidence suggests COVID-19 deaths more likely were undercounted. He also has accused the World Health Organization of letting China conceal the virus, letting the danger grow, and threatened to cut off U.S. funding.

Because U.S. cases and deaths far exceed any other nation, Trump has relentlessly argued that the figures appear inflated because more testing is done here. But the country’s sluggish start on testing is widely blamed for the higher death toll because since it slowed the response.

“It’s almost irrelevant that the numbers are people. He switches them, mocks them — he does everything with these numbers to avoid the fact that these are people,” said Julian Zelizer, a presidential historian at Princeton University.

Zelizer argues that Trump’s version affects how the rest of the country experiences the pandemic, reducing deaths to a number on a television screen and diminishing the “human introspection in terms of what the death toll is compared to wars.”

Obama’s solo singing of “Amazing Grace” at a 2015 service for the nine black worshipers killed at Mother Emanuel A.M.E. Church in Charleston, S.C., became a seminal moment of his presidency. Bush’s impromptu comments through a bullhorn at ground zero — his arm around a firefighter — was his. Lincoln’s stirring address at the Gettysburg cemetery is crucial to the national canon.

But Trump speaks rarely and mostly only in passing of the emotional toll the deaths have taken on the nation’s psyche, or the countless individuals grieving for loved ones.

He didn’t mention the victims once in his relentless Twitter feed in recent days, focusing instead on explosive political charges against China, Democrats, the media and other perceived foes and targets.

The White House disputed the perception that Trump has shown a lack of empathy, complaining that the media overlooks phone calls and other tender moments with people who have suffered.

“President Trump has provided hope and optimism throughout this unprecedented pandemic — delivering a message to all Americans, one of comfort, unity and strength because, as he says, ‘one life lost is too many,’” said Judd Deere, a spokesman.

“Despite Democrats’ and the media’s coordinated foolish criticisms, the president’s bold actions have saved thousands of lives, provided financial assistance to those in need, and set this great country on a responsible path to reopen.”

After more than a month of downplaying the threat, Trump pivoted in mid-March and called himself a “wartime president” leading the nation against an invisible foe. More recently he has praised Americans who defy stay-at-home orders as “warriors” fighting to revive a moribund economy.

Unlike other wars, the nation’s dead now are not hallowed or honored, however.

The mounting death toll during the Vietnam War, a staple on the nightly network news broadcasts that then were Americans’ chief source of information, was critical to the shifting of public opinion against continued U.S. engagement because it contradicted the success story pitched by generals and successive presidents.

Frances FitzGerald, who wrote a Pulitzer Prize-winning history of America’s war in Vietnam, said the political lines around Trump are drawn so rigidly that grieving the dead has become a political act. And even those most critical of Trump are still cycling through their anger and personal anxiety before they reach the mourning stage.

“I think it will come because right now everybody’s still sort of scared, scared for themselves” of catching COVID-19 and thus not yet able “to grieve for others,” she said. “So it’s a little too early.”

There is also the matter of the contagion itself.

Because Americans have been forced to isolate from one another to avoid spreading the virus, there are fewer funerals or other mass gatherings to console one another and share grief.

Many families have said farewells over cellphones or Zoom to quarantined parents and siblings dying in nursing homes and hospitals, adding to the trauma felt by loved ones.

“Grief must be witnessed,” said Kessler, the grief expert. “We want to know our loved ones’ life and death mattered. We want our family and friends to witness it, our community and we need our country to witness it. And it’s not happening on any level.”

Kessler has organized a daily online support meeting for those seeking an outlet for their grief, a group that is up to 15,000 members.

But most of the grieving, much like the deaths, takes place out of public view. And the morbid tabulations that appear at the bottom of the TV screen don’t come close to conveying the human toll or its scope.

But even for an expert on the psychology of bereavement, one who writes about grief and loss and who studies the COVID-19 carnage, the scale can be hard to grasp.

“Part of it is just that this is so unpleasant to think about, so we always tend to focus on other things,” said George Bonanno, a professor at Columbia University’s Teachers College who runs the school’s Loss, Trauma and Emotion Lab. “Although some days I have refrigerator trucks down the street with dead bodies, so it’s not quite as abstract.”

Paul Tarr’s 79-year-old mother, Judy, died last month after she contracted the virus in New York. He remembers the lonely walk to a rehabilitation center in Manhattan, where he would give a security guard a black trash bag containing her favorite foods, clean clothes and other items for his mother.

Because of a severe outbreak in the facility, he could not visit her.

She found peace in the final three days of her life when she was able to return home and rest in the bed she had shared with her late husband for 50 years, surrounded by her photos and paintings and a caregiver who knew her.

Tarr, 54, now grieves with his neighbors and his city every night at 7, opening a kitchen window or walking to his rooftop to thank medical workers with bells and cheers.

“I feel a kinship with my fellow New Yorkers,” he said.

But he believes the federal government has turned its back, and that some Americans view the pandemic as a regional or urban problem, a far cry from the national solidarity and support he felt after the Sept. 11 attacks.

“I don’t think much of the country understands what we’re going through,” he said.