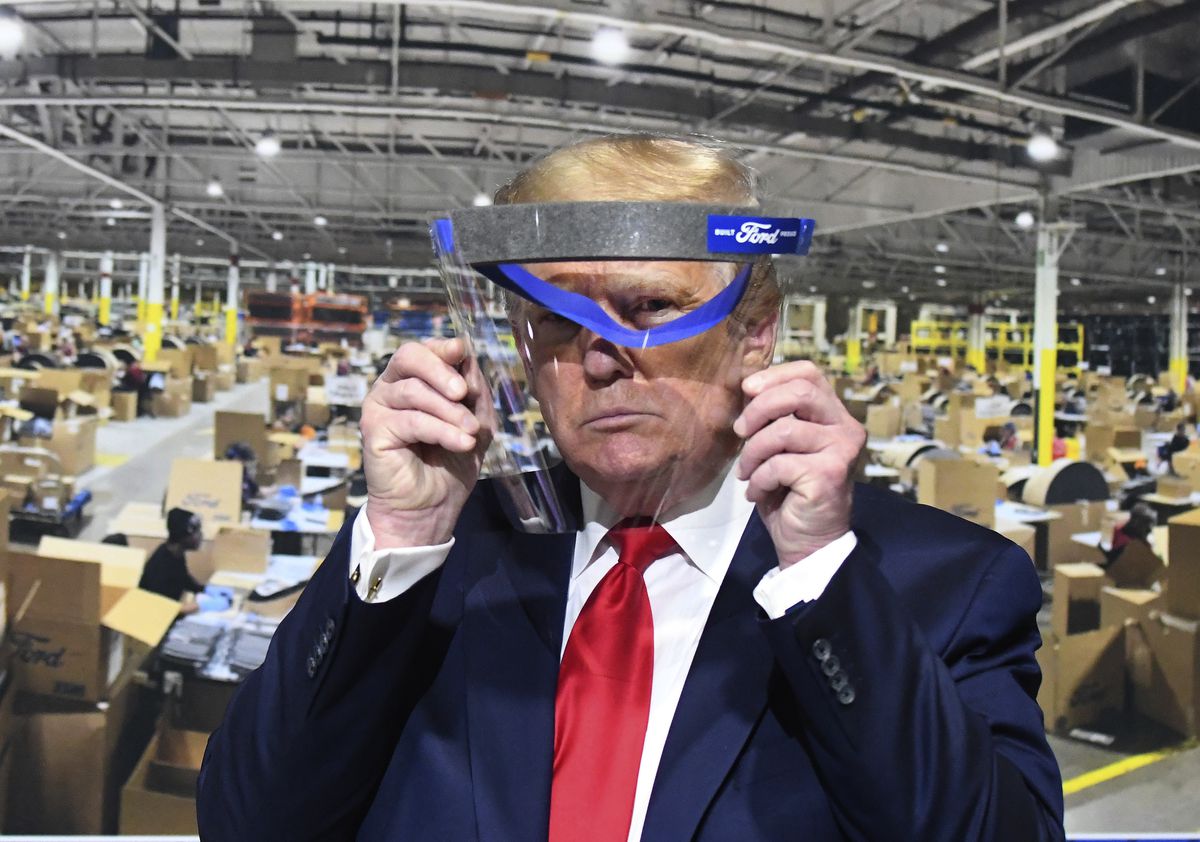 President Donald Trump looks through a face shield, in front of poster of the manufacturing of these shields, while touring Ford Motor Co.'s Rawsonville Components Plant in Ypsilanti, Michigan on Thursday, May 21, 2020. (Daniel Mears/Detroit News via AP)

President Donald Trump looks through a face shield, in front of poster of the manufacturing of these shields, while touring Ford Motor Co.'s Rawsonville Components Plant in Ypsilanti, Michigan on Thursday, May 21, 2020. (Daniel Mears/Detroit News via AP)

President Donald Trump lashed out at Michigan Attorney General Dana Nessel, D, in a pair of late-night tweets Thursday after she called him “a petulant child” following his refusal to wear a face mask at all times during his visit to a Ford manufacturing plant in the state earlier that day.

"The president is like a petulant child who refuses to follow the rules," Nessel said in a Thursday evening appearance on CNN. "This is no joke."

Nessel, who wrote a strongly worded letter to Trump ahead of his visit telling him that he had a "legal" and "moral responsibility" to wear a mask, unleashed on the president in an interview with CNN's Wolf Blitzer. Nessel slammed Trump for sending a "terrible message" and said that his unwillingness to adhere to Democratic Gov. Gretchen Whitmer's executive order and Ford's company policy mandating face coverings showed that he does not care about anyone but himself.

"He is a ridiculous person and I am ashamed to have him be president of the United States of America," she said. "I hope that the voters of Michigan will remember this when November comes. That he didn't care enough about their safety, he didn't care about their welfare, he didn't respect them enough just to engage in the very simple task, the painless task, the easy task of wearing a mask when he was provided one."

She continued: "I hope that we'll have a new president soon enough who does respect people more than this president does."

The state's chief law enforcement official also doubled down on her previous threat to take action against any company or facility in Michigan that allows Trump inside without a mask, telling Blitzer that her office is "going to have to have a very serious conversation with Ford in the event that they permitted the president to be in publicly enclosed places in violation of the order."

Nessel's criticism did not go over well with Trump.

"The Wacky Do Nothing Attorney General of Michigan, Dana Nessel, is viciously threatening Ford Motor Company for the fact that I inspected a Ventilator plant without a mask," the president tweeted shortly after 11 p.m. "Not their fault, & I did put on a mask. No wonder many auto companies left Michigan, until I came along!"

Less than five minutes later, Trump fired off another attack aimed at the "Do nothing A.G. of the Great State of Michigan."

Nessel, he wrote, "should not be taking her anger and stupidity out on Ford Motor - they might get upset with you and leave the state, like so many other companies have - until I came along and brought business back to Michigan."

Ford did not respond to a request for comment from The Washington Post early Friday. But in a statement to reporters after Trump's visit, the company said that executive chairman Bill Ford had "encouraged" the president to wear a face covering on his tour inside the Detroit-area factory that has been repurposed to produce ventilators and masks.

"He wore a mask during a private viewing of three Ford GTs from over the years," the company's statement said. "The President later removed the mask for the remainder of the visit."

Trump said as much to reporters Thursday after he was questioned about his decision to go without a mask.

"I had one on before," he said, standing barefaced in front of several men wearing masks and a large sign advertising the facility's mask-making efforts. "But I didn't want to give the press the pleasure of seeing it."

Trump went on to add that he was "given a choice" about donning a face covering.

"I had one on in an area where they preferred it, so I put it on and it was very nice. But they said, 'Not necessary here,' " he said, later showing off a navy blue mask with a presidential seal to the cameras.

When asked to confirm Trump’s comments, Bill Ford only shrugged and responded, “It’s up to him.”

Trump's disregard for the facility's policy and Whitmer's executive order, which requires that face coverings be worn in all enclosed public spaces, sparked widespread backlash Thursday, most notably from Nessel. Ahead of Trump's visit, Nessel had said that the president would be asked not to come back to Michigan if he didn't follow the state's mask mandate.

In her interview with Blitzer, Nessel said Thursday's events were "extremely disappointing and yet totally predictable," likely referring to past instances in which Trump has not respected mask policies - even those implemented by the White House.

"He's conveying the worst possible message to people who cannot afford to be on the receiving end of terrible misinformation," she said, noting that the virus has now killed more than 93,000 people nationwide. In Michigan alone, there are about 53,500 confirmed cases and more than 5,100 deaths, according to most recent figures.

On the subject of taking action against Ford, Nessel did not go into specifics, but warned the automaker that Thursday's visit could have jeopardized the safety of its employees.

"They knew exactly what the order was and if they permitted anyone, even the president of the United States to defy that order, I think it has serious health consequences, potentially to their workers," she said. "The last thing we want to see is for this particular plant now to have to close its doors . . . because someone may have been infected by the president. That is a real possibility."

Though the novel coronavirus reached the White House earlier this month, Trump said he has consistently tested negative. Before leaving for Michigan on Thursday, Trump gave an update on his daily test results, telling reporters, "I tested very positively in another sense. . . . I tested positively toward negative."

"I tested perfectly this morning," he continued. "Meaning I tested negative. But that's a way of saying it: Positively toward the negative."

That didn't stop Nessel from condemning Trump's behavior at the Ford factory Thursday, or responding to his Twitter attack with scathing tweets of her own.

"Seems like you have a problem with all 3 women who run MI - as well as your ability to tell the truth," Nessel tweeted just before midnight, referencing Trump's recent clashes with Whitmer and Michigan Secretary of State Jocelyn Benson.

"Also, hard to say I've 'done nothing' as AG with all the lawsuits myself and the other @DemocraticAGs have filed and won against you," she added.

Nessel wasn't the only one on Thursday who went after Trump for failing to wear a mask for the entirety of his tour.

The sight of the lower half of Trump's face proved equally upsetting to late-night host Stephen Colbert, who lumped the president's visit in with the "series of disasters" Michigan is experiencing.

But the CBS host said Trump was right about one thing: the media would be too happy to see him in a mask.

"There would be enormous pleasure in seeing less of his face," Colbert joked.

The Washington Post’s Anne Gearan contributed to this report.