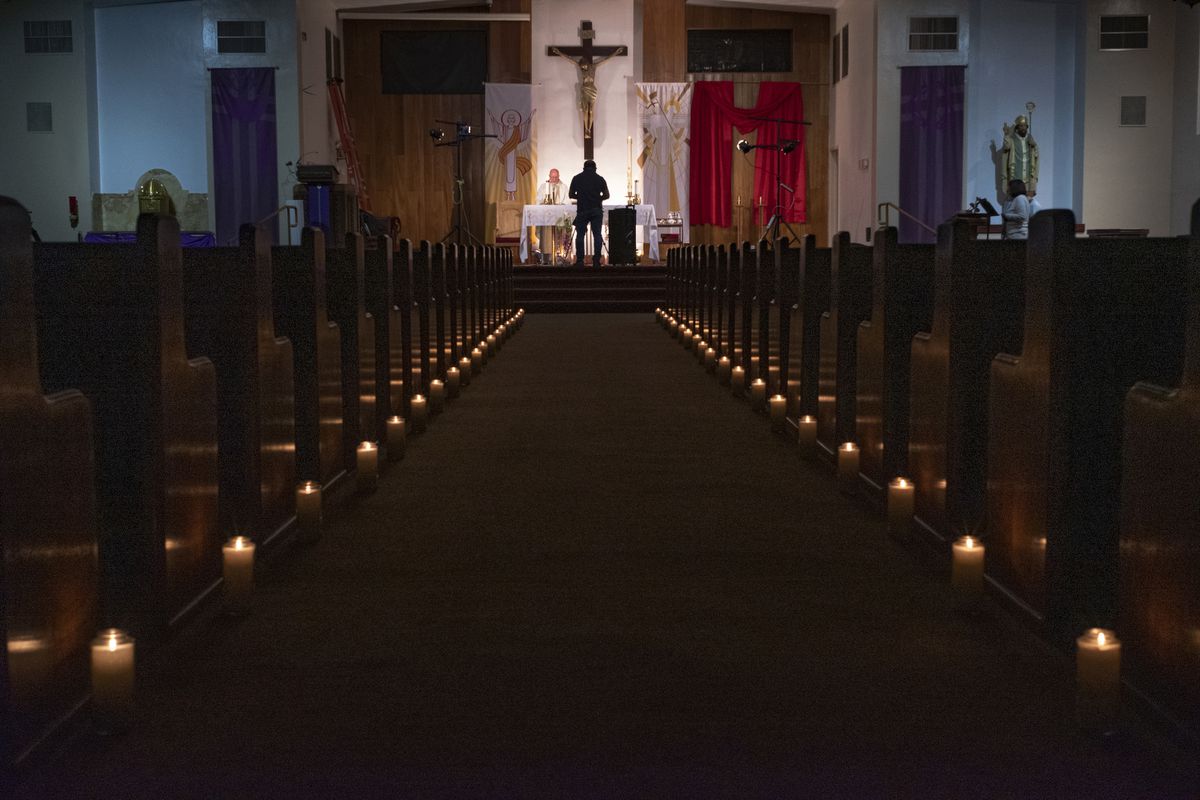 WASHINGTON - President Donald Trump on Friday called on states to allow places of worship to open immediately and threatened to “override” any governors who do not comply with his demand, opening a new cultural and political fight over when to lift public health restrictions put in place during the coronavirus pandemic.

Trump did not specify what legal authority he has to back up his threat and White House officials declined to answer questions about what actions he was prepared to take, leaving it unclear how serious the president is about following through on his declaration.

Trump said he is deeming places of worship "essential services" that can operate even when other establishments are closed as a safety precaution.

"Some governors have deemed liquor stores and abortion clinics as essential, but have left out churches and other houses of worship," Trump said during a brief appearance in the White House press room as the administration released new pandemic guidance for places of worship. "It's not right."

Restrictions in place in some states have become a point of contention for conservative religious leaders, an important constituency in Trump's political base.

"If they don't do it I will override the governors," Trump said of states that do not allow churches, synagogues and mosques to open this weekend. "America, we need more prayer, not less."

Trump's assertion of authority over how states handle religious gatherings is the latest salvo in his vacillating approach to the outbreak. He has often said governors are in charge of responding to the pandemic only to criticize policies, particularly in states led by Democrats, that he deems too strict even if they match the recommendations put out by his administration.

Public health officials continue to warn against mass gatherings or settings in which people will be in close quarters, and note that religious gatherings have been the source of several outbreaks. Some states put congregations in the same opening category as theaters.

Deborah Birx, a leader on the president's coronavirus task force, added some caveats to Trump's blanket demand for churches to open now, including that perhaps some church leaders may want to "wait another week" based on local health conditions.

"I think each one of the leaders in the faith community should be in touch with their local health department so that they can communicate to their congregants," she said during the same White House briefing.

White House press secretary Kayleigh McEnany declined to answer several questions at a briefing about what legal authority Trump had to "override" governors. Asked what he would do if a state prevented houses of worship from opening, she called that a "hypothetical" and did not answer.

"He's been very clear, he wants to see churches reopen in accordance with his guidelines," McEnany said referring new social distancing recommendations for religious services released by the Centers for Disease Control and Prevention Friday.

Friday's announcement from Trump came after weeks of discussion between the White House and the CDC about the scope of reopening guidance for houses of worship. Earlier this week, administration officials said the White House was resistant to setting limits on religious institutions even as the CDC issued a detailed road map for reopening other settings, including schools and restaurants, and as the agency warned of the dangers of high virus transmission rates at church events.

White House officials have battled with CDC aides for weeks over the guidance. Objections came from Vice President Mike Pence's office, the domestic policy council and other members on the president's coronavirus task force. In private conversations, White House officials have told religious allies that the CDC document is only a guideline, suggesting that church leaders would have the president's blessing if they bent the rules.

Trump is not a regular churchgoer, although he and his family typically attend services in Washington or Florida for Christmas Eve and Easter, and occasional other services.

White House officials have grown fearful that the president's numbers are slipping among evangelical voters, a key group to fortifying his political base of support, said three campaign advisers who spoke on the condition of anonymity to discuss private discussions.

The CDC guidance released Friday is a streamlined version of earlier draft guidelines that were the subject of internal debate at the White House last month. Although the content remains essentially the same, the introductory language is far more deferential to religious leaders than earlier drafts as well as guidance directed at other parts of society and the economy.

The release specifies that the information offered is "nonbinding public health guidance for consideration only."

Faith communities are asked to consider temporarily limiting the sharing of prayer books, hymnals and other materials; using a stationary collection box, the mail or electronic payment instead of shared collection trays or baskets; and suspending or decreasing choir or musical ensembles and congregant singing during services or other programs.

The guidance also noted that the "act of singing may contribute to transmission of covid-19, possibly through emission of aerosols."

During a choir practice in Washington state, one person ended up infecting 52 other people, including two who died, according to a CDC report last week about what it described as a “superspreader event.”

Some officials discussed simply releasing the revamped CDC guidelines without fanfare, but Trump decided to do an event so he could get public credit for fighting for churches, said two administration officials who spoke on the condition of anonymity to discuss policy decisions. On Tuesday, administration officials had said there were no plans to issue guidance for religious institutions because some officials in the White House and on the coronavirus task force did not want to alienate the evangelical community and believed that some of the proposals, such as limits on hymnals, the size of choirs or the passing of collection plates, were too restrictive.

Trump and Pence have maintained close ties to conservative religious leaders during the pandemic, scheduling private calls and asking for support as they try to lift public health restrictions, the officials said.

Trump suggested Friday that faith leaders could be trusted to take care of their congregations.

"They love their people," he said. "They don't want anything bad to happen to them or to anybody else."

Earlier this month, the Justice Department filed a statement of interest in a lawsuit filed by a church in Chincoteague, Virginia. In that suit, the church has argued that Gov. Ralph Northam, a Democrat, violated the congregation's constitutional rights to practice their religion.

The Justice Department's filing in that case said the Lighthouse Fellowship Church has a "strong case" that its First Amendment rights have been abrogated by an order banning gatherings of more than 10 that applies to churches but not some secular businesses, like liquor stores and professional offices.

The Justice Department had previously argued in a similar suit on behalf of a Mississippi church and on Tuesday told California Gov. Gavin Newsom, a Democrat, that his plan to reopen California discriminates against churches.

Asked about Trump's declaration that churches should be considered as essential and fully reopened, Northam stood by Virginia's policy of allowing services with 50 percent capacity.

"I have talked to a lot of faith leaders, including my minister on the Eastern Shore," Northam said, adding that many said they are continuing to safeguard their congregations with creative solutions such as outside, drive-up services.

"If they're more comfortable continuing the practice they've used over the past few weeks, they can do that," he said.

A spokesman, Mike Ricci, said Hogan agrees with Trump that churches should be able to reopen. But he said Friday that the governor has no plans to force local county executives to follow his order allowing churches to do so.

"We will continue to follow a community-based approach," he said.

Some prominent evangelical leaders said they were worried the president's pressing for openings could encourage some clergy to take unnecessary risks with their congregants' health. Some of the megachurches led by Trump advisers remain closed through the month.

Galen Carey, vice president of government relations for the 45,000-member National Association of Evangelicals, said Friday that "just because the government says it's ok to open doesn't necessarily mean it's wise to reopen. The best way to show love is to make sure we don't infect others." His anecdotal sense is that "very few" of NAE's members are opening, he said.

Carey said the NAE put out its own guidance to its members last week, urging them to follow guidelines of local and state authorities.

Asked about the president's comment about "overriding" governors who didn't allow congregations to open, Carey said the primary concern of NAE's members is that they are treated the same as similar organizations - such as movie theaters, or other places where people sit or stand together in one place for a long period.

The Associated Press reported Friday that Dallas-area megapastor Robert Jeffress, a key advocate for the president, is "eyeing local metrics and could reopen next month. The opening would be "data-driven, instead of date-driven" the AP quoted him as saying.

A spokeswoman for the ministry of Paula White, a personal spiritual adviser to the president who runs the White House faith office, said earlier this week that for now Pentecost services at the Florida church would be online only, the AP reported.