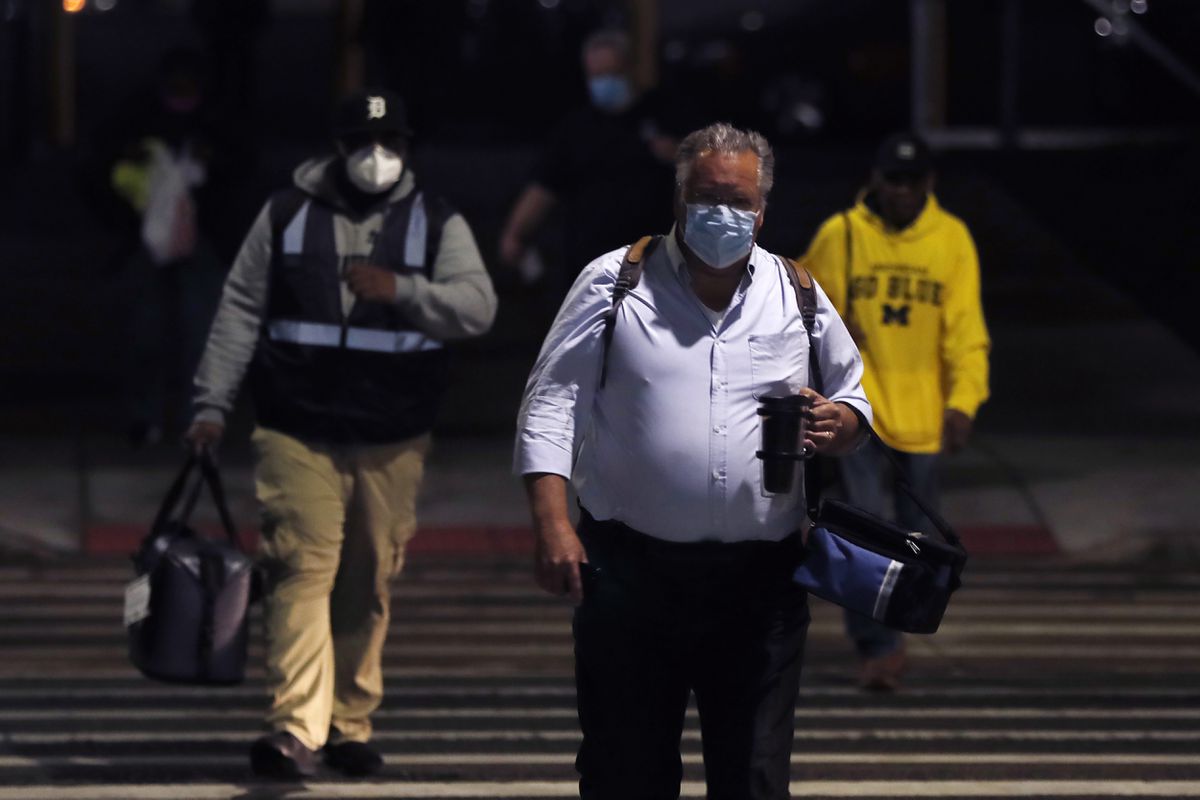 United Auto Workers return for the first work shift at the FCA Warren Truck Plant, Monday, May 18, 2020, in Warren, Mich. Fiat Chrysler Automobiles NV along with rivals Ford and General Motors Co., restarted the assembly lines on Monday after several week of inactivity due to the corona virus pandemic. (AP Photo/Carlos Osorio)

United Auto Workers return for the first work shift at the FCA Warren Truck Plant, Monday, May 18, 2020, in Warren, Mich. Fiat Chrysler Automobiles NV along with rivals Ford and General Motors Co., restarted the assembly lines on Monday after several week of inactivity due to the corona virus pandemic. (AP Photo/Carlos Osorio)

WASHINGTON — Congress is at a crossroads in the coronavirus crisis, wrestling over whether to “go big,” as House Speaker Nancy Pelosi wants for the next relief bill, or hit “pause,” as Senate Majority Leader Mitch McConnell insists.

It’s a defining moment for the political parties heading toward the election and one that will affect the livelihoods of countless Americans suddenly dependent on the federal government. Billions of dollars in state aid, jobless benefits and health resources are at stake. As questions mount over Washington’s proper role, it’s testing President Donald Trump and Congress.

"These are the eternal debates in American history," said Richard Sylla, a professor emeritus of economic and financial history at New York University.

"It's a bit like what Alexander Hamilton was facing in 1790," he said, describing the plan to have the new federal government assume the Revolutionary War debts of the states, despite protests of a bailout. It was, he said, as Hamilton framed it, "the price of liberty."

As negotiations develop on Capitol Hill, the coronavirus response offers Congress an opportunity to shape the country's post-pandemic future but also carries the risk of repeating mistakes of past crises, including the 2008-09 recession, that history does not easily forget.

Trump and McConnell huddled late last week on next steps after rejecting Pelosi's plan. The Democratic speaker set the table with passage of the sweeping $3 trillion coronavirus relief bill, which includes $1 trillion to shore up states and cities to avert municipal layoffs, $1,200 stipends to Americans and other aid.

"We could have done bigger," Pelosi told The Associated Press in a recent interview.

With more than 38 million unemployment claims, the Republican response centers on kick-starting the economy to reduce the need for more federal intervention.

[Anchorage gyms and exercise studios slowly reopen, to both trepidation and relief]

Republican priorities are to wean Americans off unemployment benefits to nudge people back to work and provide liability protections for businesses that reopen.

Republicans want to eliminate the $600 weekly unemployment benefit boost, arguing it "handcuffs" some employees with higher pay than they earn at their jobs. McConnell also wants to protect doctors, schools and others from COVID-19-related lawsuits — a "red line," he says, for any deal.

"There's a high likelihood we will do another rescue package," McConnell said on Fox News. "We need to work smart here."

The political and economic debate stretches beyond the halls of Congress as wary Americans await Washington's next move.

It was Federal Reserve Board Chairman Jerome Powell who counseled Pelosi to rely on historically low interest rates to "go big," while Treasury Secretary Steven Mnuchin warned of "permanent damage" to the economy unless businesses reopen.

Washington has been here before. Staring down the 2008-09 financial crisis forced the House and Senate into a historic debate over the size and scope of government that still resonates today.

Then, like now, countless Americans fell swiftly into the ranks of the newly unemployed, while the very foundations of the American dream — home ownership then, health now — hung in the balance. Then, banks needed a federal lifeline; today, businesses look to Washington for help.

Pelosi told the AP the biggest lesson learned was to be "very prescriptive" in how the money would be spent after facing a backlash that the rescue benefited Wall Street over Main Street.

But perhaps another lesson from the earlier crisis was the voter revolt against big government. The bank bailout and recovery act sparked the rise of the tea party wing of the GOP. Pelosi lost her gavel in the 2010 election, and Republicans took control of the House.

Many of the same tea party forces — including the deep-pocketed Koch network — are aligned with Trump's push to prevent state aid, reopen the country and get people back to work.

"The American people need to understand the choices they have," said North Carolina Sen. Thom Tillis, one of the most endangered Republicans seeking reelection in the fall, during an online forum with the Koch-backed Americans for Prosperity.

Tillis opposes Pelosi's "manifesto" and doesn't expect the Senate to act before July. He said of the GOP-held Senate, "We're a bulkhead against bad happening."

Despite rare bipartisan support for earlier aid, the $2 trillion bill approved in March, neither side was particularly pleased with the outcome, the largest federal intervention in U.S. history.

Polling, however, shows Americans favoring the federal response, even as they have some concerns about spending.

An AP-NORC poll conducted in late March found that elements of the stimulus package were widely popular. The poll found that about 9 in 10 Americans favored the federal government providing funding to small businesses and hospitals.

About 8 in 10 said they were in favor of suspending evictions and foreclosures, giving lump-sum payments to Americans, increased unemployment benefits and suspended student loan payment.

A mid-April NBC/Wall Street Journal poll showed registered voters somewhat more likely to say they were concerned about the federal government spending too much on economic stimulus and driving up the budget deficit than they were worried that too little money would be spent, lengthening the recession, 48% to 40%. The remaining 12% said they didn't know.

But she said on her drive home to hard-hit Michigan, "The cost of inaction will be much higher."