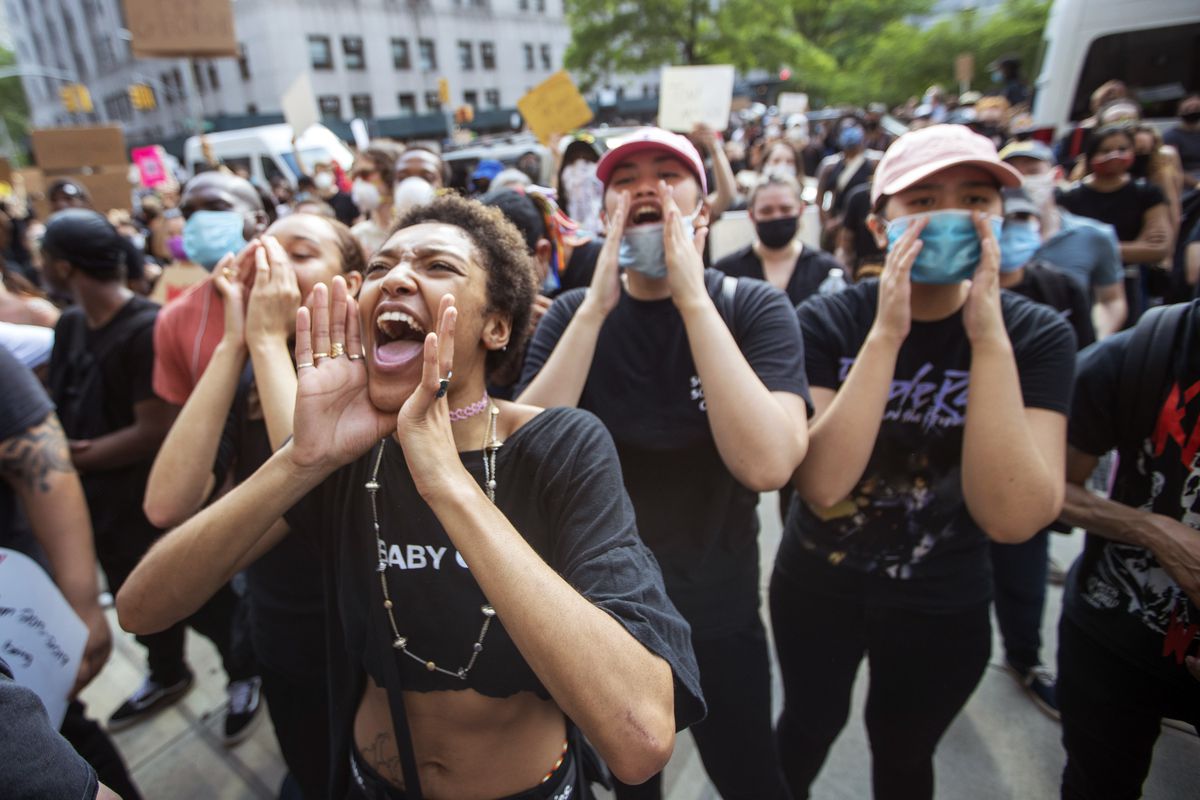 Protesters demonstrate against the the death of George Floyd, a black man who was in police custody in Minneapolis, Friday, May 29, 2020, in New York. The massive protests sweeping across U.S. cities following the police killing of a black man in Minnesota have elevated fears of a new surge in cases of the coronavirus. (AP Photo/Mary Altaffer)

Protesters demonstrate against the the death of George Floyd, a black man who was in police custody in Minneapolis, Friday, May 29, 2020, in New York. The massive protests sweeping across U.S. cities following the police killing of a black man in Minnesota have elevated fears of a new surge in cases of the coronavirus. (AP Photo/Mary Altaffer)

LOS ANGELES — The massive protests sweeping across U.S. cities following the police killing of a handcuffed black man in Minnesota have elevated fears of a new surge in cases of the coronavirus.

Images showing thousands of shouting, unmasked protesters have sent shudders through the health community, which worries its calls for social distancing during the demonstrations are unlikely to be heard.

Leaders appealing for calm in places where crowds smashed storefronts and destroyed police cars in recent nights also have been handing out masks and warning protesters they were putting themselves at risk.

Minnesota’s governor said Saturday that too many protesters weren't socially distancing or wearing masks after heeding the call earlier in the week.

But many seemed undeterred.

“It’s not OK that in the middle of a pandemic we have to be out here risking our lives,” Spence Ingram said Friday after marching with other protesters to the state Capitol in Atlanta. “But I have to protest for my life and fight for my life all the time.”

Ingram, 25, who was wearing a mask, said she has asthma and was worried about contracting the virus. But she said as a black woman, she always felt that her life was under threat from police and she needed to protest that.

The demonstrations over the killing of George Floyd, a black man who died after a white Minneapolis officer pressed a knee into his neck, are coming at a time when many cities were beginning to relax stay-at-home orders.

That’s especially worrisome for health experts who fear that silent carriers of the virus who have no symptoms could unwittingly infect others at gatherings with people packed cheek to jowl and cheering and jeering without masks.

“Whether they’re fired up or not that doesn’t prevent them from getting the virus,” said Bradley Pollock, chairman of the Department of Public Health Sciences at the University of California, Davis.

Images from many demonstrations show most protesters have been wearing masks, but that doesn't guarantee protection from the coronavirus. The Centers for Disease Control and Prevention recommends cloth masks because they can make it more difficult for infected people to spread the virus — but they are not designed to protect the person wearing the mask from getting the virus.

The U.S. has been worst hit by the coronavirus outbreak, with more than 1.7 million cases and over 103,000 deaths, according to a tally kept by Johns Hopkins University.

In New York City, where more than 21,000 people have died during the pandemic, a large crowd in Brooklyn tossed water bottles at officers and torched a police van Friday outside the Barclays Center.

Minnesota Gov. Tim Walz said after another night of unrest in Minneapolis that many protesters wearing masks were simply trying to hide their identities and “cause confusion and take advantage of this situation.”

“I will continue to stress, because it seems like a lifetime ago: We are still in the middle of a pandemic and passed 1,000 deaths yesterday. We still have hospitals on the verge of being overrun with COVID-19,” he said.

Minneapolis Mayor Jacob Frey echoed those concerns. “We have two crises that are sandwiched on top of one other,” he said.

The state’s health commissioner had warned just days earlier that the massive protests were almost certain to fuel new cases of the virus. Minnesota reported 35 deaths on Thursday, a single-day high since the start of the outbreak, and 29 more on Friday.

But it wasn’t just protesters at risk. Images showed unmasked officers standing alongside demonstrators. In Atlanta, police Chief Erika Shields waded into a crowd without a mask Friday while she listened to people air frustrations.

When Los Angeles officials announced earlier in the week that the city was relaxing stay-at-home orders and reopening stores, they also said political protests could resume but with a cap of 100 people.

Several hundred people showed up for a protest organized by Black Lives Matter-LA and later shut down a freeway. Most wore masks, but many did not observe a buffer zone.

“Show respect for each other by putting on that face covering so that your respiratory droplets aren’t unintentionally getting into somebody else’s mouth, nose or eyes,” she said.

Meanwhile, the European Union on Saturday urged President Donald Trump to rethink his decision to terminate the U.S. relationship with the World Health Organization as spiking infection rates in India and elsewhere reinforced that the pandemic is far from contained.

Trump on Friday charged that the WHO didn’t respond adequately to the pandemic and accused the U.N. agency of being under China’s “total control.” The U.S. is the largest source of financial support for the WHO, and its exit is expected to significantly weaken the organization.

The head of the EU’s executive arm urged Trump to reconsider. “The WHO needs to continue being able to lead the international response to pandemics, current and future,” European Commission President Ursula von der Leyen said.

In China, where the virus outbreak began, only four new confirmed cases were reported Saturday, all brought from outside the country.

Nearly 6 million coronavirus infections have been reported worldwide, with more than 366,000 deaths and almost 2.5 million recoveries, according to the Johns Hopkins tally. The true death toll is widely believed to be significantly higher, with experts saying many victims died of the virus without ever being tested for it.

Elite sporting events will be allowed to resume in England starting Monday, but without spectators, paving the way for the planned June 17 return of the Premier League, the world’s richest soccer competition.

England’s deputy chief medical officer Jonathan Van-Tam warned that the situation overall remained precarious. “I believe this is also a very dangerous moment,” he said. “We have to get this right.”

India registered another record single-day jump of 7,964 cases and 265 deaths. The government had been expected to end a 2-month-old nationwide lockdown but instead extended measures in areas due to coronavirus outbreaks.

Seewer reported from Toledo, Ohio. AP reporters from around the world contributed to this report.