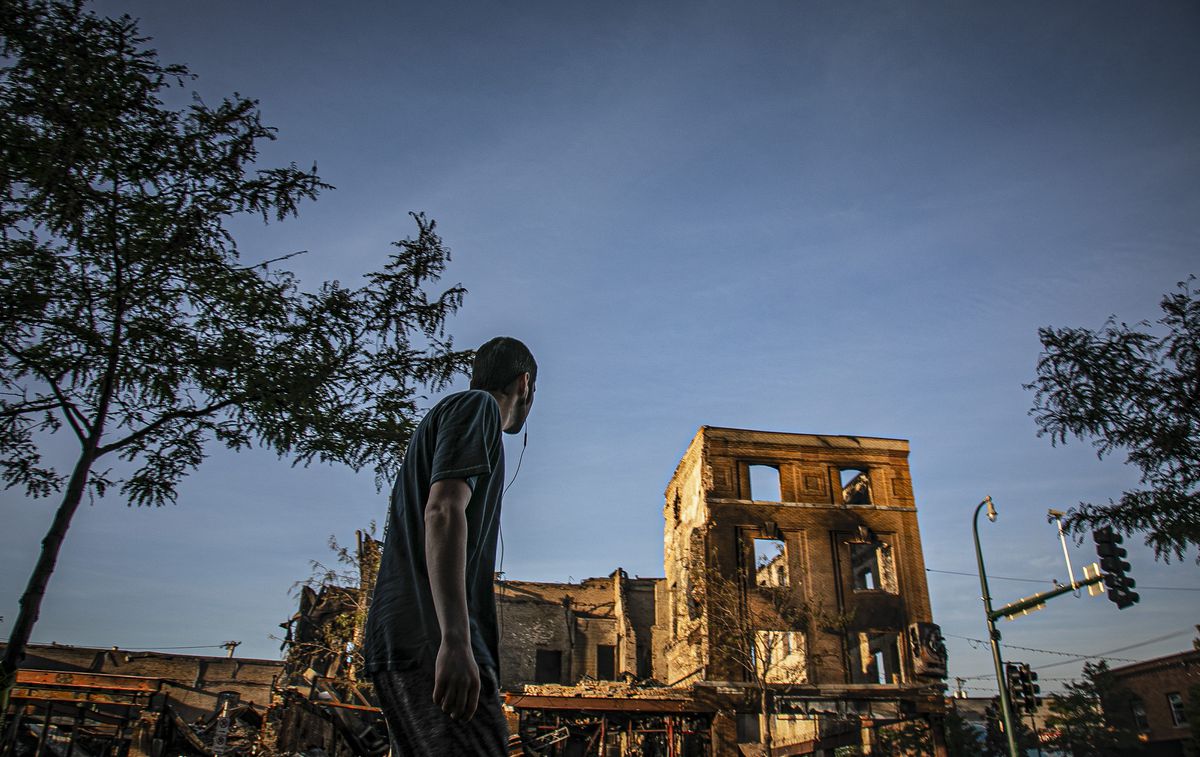 A man walks on Lake Street while looking at businesses destroyed during riots and protests over the death of George Floyd, Sunday May 31, 2020, in Minneapolis. Floyd died after being restrained by Minneapolis police officers on May 25. (AP Photo/Bebeto Matthews)

A man walks on Lake Street while looking at businesses destroyed during riots and protests over the death of George Floyd, Sunday May 31, 2020, in Minneapolis. Floyd died after being restrained by Minneapolis police officers on May 25. (AP Photo/Bebeto Matthews)

MINNEAPOLIS — Along the miles-long Minneapolis street where more than a century of migrants have found their American footholds -- Germans, Swedes, Vietnamese, Somalis, Mexicans -- a new history can be traced.

There’s the smoldering police station torched early Thursday morning by protesters enraged by the death of George Floyd while in custody. There’s the Wells Fargo bank branch a couple of blocks away that mobs stormed through the next night, leaving behind a carpet of shattered glass and strewn paperwork. “Kill Bankers” reads the graffiti now spray-painted on an outside wall.

Go further up Lake Street and there’s more fresh history: the Somali restaurant with the broken windows, the empty hulk of a burned sneaker store, the boarded-up party supply store owned by a Mexican immigrant who had been praying for the coronavirus lockdown to end to so he could reopen.

The protests that have roiled Minneapolis night after night didn’t inflame just a single neighborhood: Much of the violence raged up Lake Street, an artery of commerce and culture that cuts across a broad swath of the city.

For residents, for businesspeople, for artists, the Lake Street corridor has long been a symbol of the city’s complex history, a block-by-block study in immigration, economic revitalization and persistent inequality.

On one end is a trendy district of bars and shopping. On the other are quiet neighborhoods atop the Mississippi River bluff. Between the two is a timeline that spans almost five miles marking each wave of arrivals, along with a tangle of languages spoken in each group’s markets, restaurants, churches and community groups.

The Lake Street businesses owned by Suad Hassan’s family are now boarded up, bearing messages like “black owned – solidarity.” Each night, the family has stood guard, successfully begging the mobs to pass them by.

The 35-year-old was born in Somalia, but her family fled the country to escape war when she was a child.

“When I saw the fire two nights ago, it was like a trauma that was triggered again for me,” she said. “I had put that away in my life a long, long time ago ... I told my mom ‘This is a war zone.’”

It’s Lake Street’s minority-owned small businesses that may suffer the most from the racial firestorm that hit the city this week. As thousands of people protested a police force with a history of violence against people of color, the collateral damage spread wide — from immigrant-owned restaurants to a center for Native American youth to an affordable housing complex under construction.

“What happened with Mr. Floyd is a horror,” said Eduardo Barrera, the general manager of Mercado Central, a cooperative of largely Latino-owned businesses that help spark economic revitalization along the street when it opened 20 years ago. The muraled corner building was broken into twice during the unrest, with some of its goods stolen.

“Nothing changes and people feel they’ve lost everything,” Barrera said. “There’s nothing to lose for them anymore. When there’s no justice, no fairness and no equity, they lose hope.”

“But we are hurting ourselves,” he said.

Many speculate that Lake Street was hit so hard because its eastern stretch includes the station associated with the white officer now charged with murdering Floyd. The destruction is particularly painful because Lake Street had become a success story, an achievement people took pride in.

Residents and business owners say they’ve spent the last 20 years working to revive its chain of neighborhoods -- many blighted by years of neglect, suburban flight and disinvestment.

Deb Frank moved into the Longfellow neighborhood just off East Lake Street 25 years ago, buying a two-bedroom, 100-year-old home for $40,000. The mail carrier and her neighbors teamed up to rid the area of two brothels by calling in license plates to the police and embarrassing the patrons.

Frank and her husband became used to walking to restaurants and coffee shops. “It was a really big transformation,” she said,

Today, she wonders: Is it all fleeting?

“It took years to get where we were and here we’re back in square one,” she said, noting even the local post office had been damaged enough to disrupt mail service. “No, we’re worse than square one.”

By all accounts, immigrant entrepreneurs have been the engine of Lake Street’s repeated resurgences. The stretch, which runs east-west through the city’s south side, has long been a landing pad for recent arrivals to the city.

Early in the last century, it was Germans like Emil Schatzlein, who opened a saddle shop on West Lake Street in 1907 that still sells cowboy boots today. And the Scandinavians whose imprint is still visible in the nearly 100-year-old Ingebretsen’s Nordic Marketplace, a local institution known for its lefse and herring.

Today, within a couple blocks of Ingebretsen’s, you can buy a bottle of fresh camel milk in an East African grocery and fried tortillas at Taqueria La Poblanita.

Just like many American cities, the 1960s saw a stream of white residents and businesses leave Lake Street for the suburbs. Buildings emptied out. By the time the Sears department store abandoned its towering building in the mid-1990s, much of the corridor was desperate for an economic infusion.

“It reinvented itself as an immigrant gateway,” said Bill Convery, director of research at the Minnesota Historical Society. “The economic blight led to opportunity.”

Somali immigrants fleeing war were among those who soon took advantage of the affordable rents to build businesses. Community organizations reopened the Sears building as the Midtown Global Marketplace, a showcase for food and crafts.

Still, the economic progress did not erase the stubborn poverty, the racism or the striking inequality.

The corridor’s neighborhoods, along with city’s north side and core, know about police tensions all too well. An ACLU study of city arrests from 2012-2014 found black and Native American people more than eight times more likely than white people to be arrested for low-level offenses.

Minneapolis also has wrestled with its growing racial segregation -- a division uncomfortably illustrated by driving east on Lake Street, which begins in the overwhelmingly white, quiet and leafy neighborhoods near Uptown before shifting into largely black or mixed neighborhoods.

Business already were suffering from the pandemic’s stay-at-home orders when the protests started.

Gregorio De La Cruz a Mexican immigrant, was just starting to reopen his two East Lake Street businesses -- a party supply and candy store, and a commercial cleaning business -- when the violence erupted. Less than a mile from the torched police precinct, he has closed shop again.

“I never imagined there would be so much violence in this neighborhood,” he said, his eyes welling up as his 19-year-old daughter translated his Spanish words into English.

“We understand what’s going on and we get that this is important. They have a right to protest. I wish they’d do it peacefully,” he said.

This story has been updated to correct the spelling of Wells Fargo, which had been misspelled “Well Fargo.”