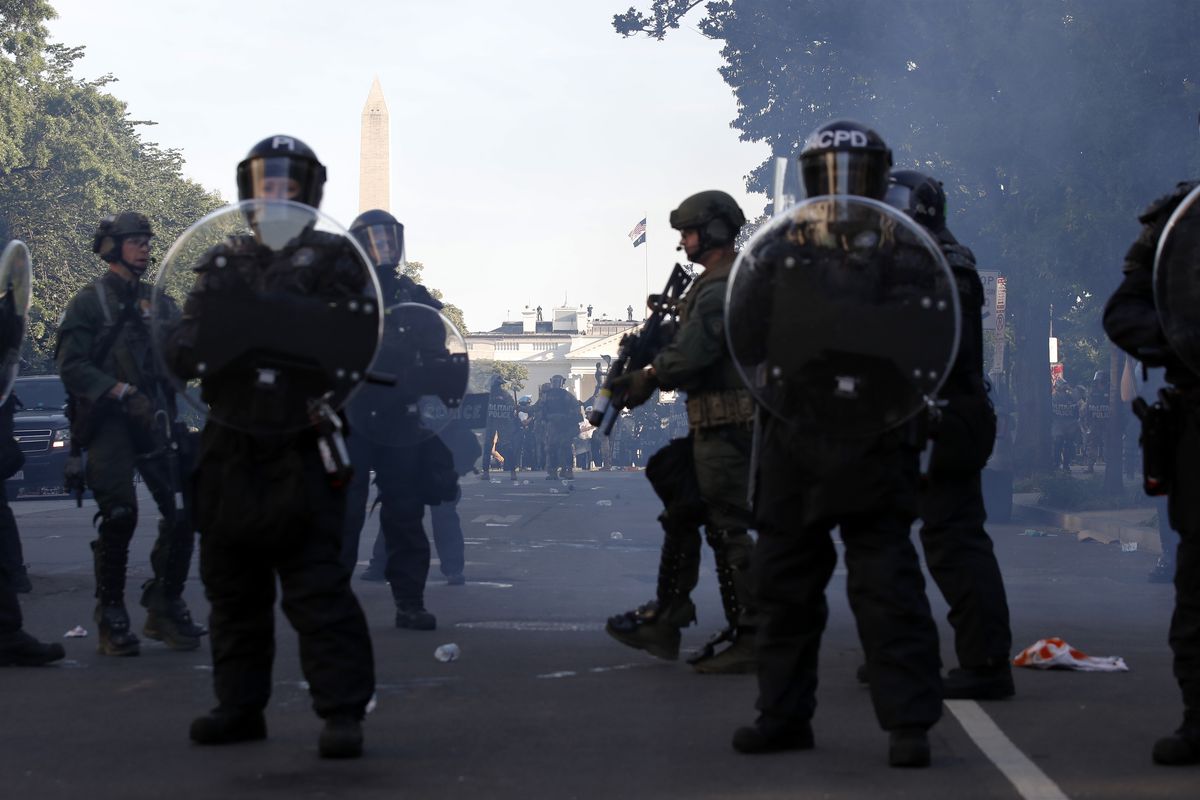 Police clear demonstrators from Lafayette Park as they protest the death of George Floyd, Monday, June 1, 2020, in Washington. Floyd died after being restrained by Minneapolis police officers. (AP Photo/Alex Brandon)

Police clear demonstrators from Lafayette Park as they protest the death of George Floyd, Monday, June 1, 2020, in Washington. Floyd died after being restrained by Minneapolis police officers. (AP Photo/Alex Brandon)

WASHINGTON - In a massive show of force, the National Guard fired sting balls and some form of tear gas at peaceful protesters outside the White House on Monday evening as President Donald Trump appeared in the Rose Garden to announce the mobilization of “thousands and thousands of heavily armed soldiers” to quell “lawlessness” across the country.

After hundreds of protesters were pushed away from Lafayette Square, where they were protesting the killing of George Floyd, the president walked through the park to visit St. John’s Church.

The historic church where presidents have worshiped since James Madison had been set on fire Sunday, during the third night of protests in the District when the mostly peaceful demonstrations devolved into looting and vandalism.

D.C. Mayor Muriel Bowser, a Democrat, rolled back a curfew to 7 p.m. in hopes of avoiding another destructive night. But the appearance of the National Guard and mounted U.S. Park Police brought the most aggressive law enforcement response yet.

With shields that said "military police," the Guard members stood shoulder to shoulder, moving forward every few minutes. When they knelt - as officers have been doing to show solidarity with demonstrators - the crowd cheered. But protesters soon realized they were kneeling only to put on gas masks.

Minutes later, they began firing at the gathered masses, hitting protesters who were standing atop a bathroom that had been burned the night before. One person fell from the structure.

The sudden use of force left protesters bruised, bleeding and in shock. As the crowd was pushed down 16th Street, some yelled "walk! walk!" in attempts to avoid a stampede.

"They flushing us out," one protester told another.

White House spokesman Judd Deere defended the Guard’s actions in Lafayette Square, saying “the perimeter was expanded to help enforce the 7 p.m. curfew in the same area where rioters attempted to burn down one of our nation’s most historic churches the night before. Protesters were given three warnings by the U.S. Park Police.”

Just before the Guard began advancing on the crowd, Bowser warned in a news conference that she had no authority over federal law enforcement teams. Her administration asked the federal government to keep their protest response limited to federal property.

"I will say I know the values of Metropolitan Police Department, I know our officers, I know the expectations of them, they know how to work with our community and they know they are accountable to the chief and me and to independent bodies in this government for how they behave," Bowser said. "We can't always say those same things about other entities."

As she spoke, U.S. Attorney General William Barr arrived at Lafayette Square. Protesters shouted at him and chanted his name with expletives. Earlier in the day, Barr had ordered the Federal Bureau of Prisons to send anti-riot teams to D.C., according to a senior Justice Department official. Drug Enforcement Administration officers and vehicles were also deployed in the downtown area and appeared to be barricading streets. At the corner of Seventh and K streets Northwest, agents stood chatting by their vehicles.

"Day one, baby," one said to another with a laugh.

The influx of federal law enforcement agencies was at the direction of Trump, who boasted about the military might descending upon America.

"Those who threaten innocent life and property will be arrested, detained and prosecuted to the fullest extent of the law," Trump said in the Rose Garden. "I want the organizers of this terror to be on notice that you will face severe criminal penalties and lengthy sentences in jail."

The tone was entirely different earlier in the evening when D.C. police Officers had made efforts to show solidarity with the demonstrators. An African American female officer stepped off her bike before a crowd of protesters in front of the Trump International Hotel, and knelt.

The crowd cheered, whooped and snapped pictures. One yelled, "Don't cheer that s---!" Then another: "They still be killing us!"

Attention turned to the other dozen officers.

"Officer, do you agree with us?" asked Leo West, a 20-year-old student from Takoma Park, Maryland wearing a Black Lives Matter face mask.

Suddenly the officer, an African American whose uniform gave his name as P.D. Harris, briefly sank to his knee.

"You're a good man, Officer," West shouted. "All of you can do it. Be like Office Harris."

Somehow, they seemed to listen. Half a dozen more officers sank to their knee as well.

But by now, Officer Harris was on his feet.

"Do it again," urged Edward Dana, a 24-year-old University of D.C. student and employee of the department of disability services. When Harris refused, Dana became upset.

"Let's be cool," said Tony Norris, a 22-year-old from Waldorf, Maryland who worked in a music store until the coronavirus pandemic hit.

"This man still has a family to get back to," said Norris, who is African American. "He'll take a knee when he needs to."

Protests over the weekend also began peacefully and remained that way until after nightfall. On Sunday night, American flags, parked cars and buildings were burned, including St. John's Church. Firefighters quickly extinguished the basement fire, which police said was intentionally set.

The intensity of the damage, and the knowledge that the protests would begin again in a matter of hours, forced government agencies and businesses to take quick action.

The Department of Veterans Affairs, whose headquarters on Vermont Avenue is steps from the White House, ordered all nonessential employees to go home by noon on Monday.

Businesses across D.C. from H Street Northeast to 14th Street Northwest boarded up their storefronts. Bowser's office said she had asked business improvement districts in Georgetown, downtown and Mt. Vernon Triangle to board up shops Monday. Volunteers dispersed across the city to sweep glass chards and scrub graffiti off buildings.

Twitter became a major vehicle for misinformation about unrest in D.C.

"This is my home," said Cam Brown, a 20-year-old who came out with his friends to clean up the damage. "Why would I destroy my home?"

As his friends discussed which neighborhoods to go to Monday morning, a police cruiser pulled up. The passenger side window rolled down. Inside, an officer gave them a thumbs up. "Thank you," he said, and the group waved back.

But the in-it-together feelings between citizens and law enforcement officers became more sporadic as more demonstrators descended on Lafayette Square and the area surrounding the Capitol, where chants of “No Justice, No Peace,” mixed with the music of Kendrick Lamar and Childish Gambino blaring from their smartphones.

"7 p.m.? Y'all wish!" a young African American woman yelled at the police, referring to Bowser's new curfew. "We're going to be out here till 4 a.m.!"

After being pushed out of Lafayette Square, the protesters were faced with a choice: find another spot to demonstrate, resisting the curfew order, or go home.

"If we die here today it's not worth it today, bro," one man told another. "It's after 7, they can do whatever they want to you. There are no rules."

Nsidebe Eka 19, was frantically running toward the White House, looking for a set of lost keys. Her family didn't want her to go to the protest, but she said she was tired of sitting on the sidelines. Now her eyes were stinging from the chemicals the National Guard had sprayed to get the crowd to disperse.

"We had a peaceful protest and they still did all that," she said. "They don't love us, they don't [care] about us, and it's because we're black."

As she tried to return to her Maryland home, she crossed paths with a large group of protesters. She decided not to join.

Protesters who lingered were met by dozens of D.C. police officers in riot gear and announcements over the loudspeaker of their police cruisers: "Attention: you are subject to immediate arrest. You are in violation of the mayor's order."