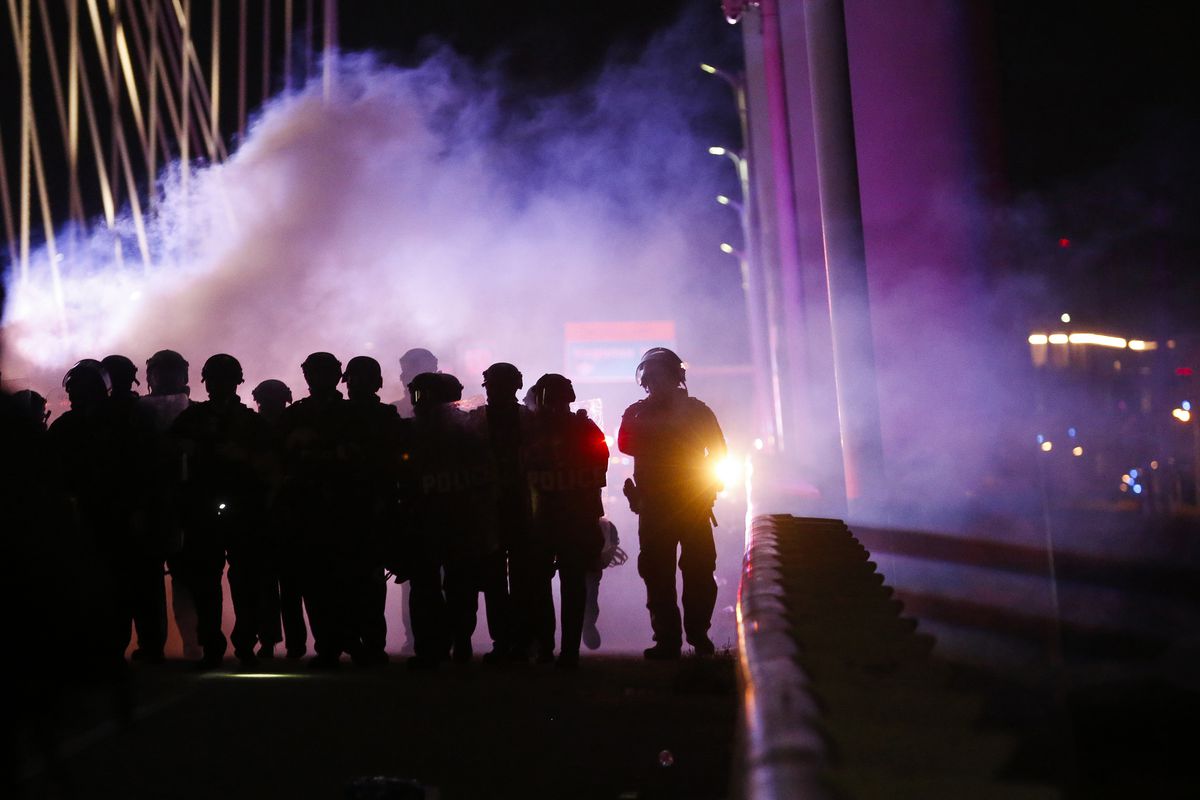 Police deploy smoke bombs and tear gas as they surround protesters who marched onto the Margaret Hunt Hill Bridge while demonstrating against police brutality on Monday, June 1, 2020, in Dallas. The hundreds of protesters were surrounded and detained by police on the bridge and transported to the Dallas County Jail where they were later released. (Ryan Michalesko/The Dallas Morning News via AP)

Police deploy smoke bombs and tear gas as they surround protesters who marched onto the Margaret Hunt Hill Bridge while demonstrating against police brutality on Monday, June 1, 2020, in Dallas. The hundreds of protesters were surrounded and detained by police on the bridge and transported to the Dallas County Jail where they were later released. (Ryan Michalesko/The Dallas Morning News via AP)

Some footage from protests after the death of George Floyd - even some of the peaceful ones - shows ominous plumes of gas rising above fleeing crowds or streets littered with projectiles. Both are evidence of crowd-control measures that were once called “nonlethal” but are now dubbed “less lethal,” a nod to the fact that they sometimes kill.

These types of weapons are often included in police department "use of force" continuums, which attempt to assign an appropriate response to the level of risk an officer might encounter. There is no national standard for police use of force, so these continuums vary among departments.

For the Civil Disturbance Unit of the District of Columbia police, the use-of-force continuum begins with the simple presence of uniformed police and ends with deadly force. Between these are less-lethal weapons.

Tear gas: What it is

One of the most commonly used chemicals is 2-chlorobenzalmalononitrile, (nicknamed "CS" for the initials of the chemists who created it), which was used by the U.S. military in the Vietnam War.

This "gas" is actually solid pellets that become aerosolized when they are deployed - fired in shells over crowds or thrown as grenades. Pepper spray is sometimes used this same way.

Inhaled tear gas can cause inflammation, coughing, wheezing, vomiting and serious breathing difficulty, especially in people who have respiratory problems, according to Physicians for Human Rights.

This effect is particularly dangerous during a pandemic in which the virus is spread by respiratory droplets.

Other serious complications can arise. Heart rate and blood pressure can increase and cause cardiac problems, even heart attacks.

Canisters are supposed to be fired over the heads of crowds, but that is not always the case. A direct hit can cause blunt-trauma injuries or even death.

Rubber bullets and other kinetic weapons: What they are

Kinetic weapons include all the things police fire from guns and launchers that are meant to inflict pain without penetrating the skin.

They are often less accurate than ordinary bullets, especially at long distances.

Ideally, law enforcement officers aim kinetics at arms and legs to avoid major internal damage, unlike in lethal-weapon situations in which officers are taught to aim for the center of a person's body.

Kinetic weapons can be shot directly at people or "skip-fired," which means aiming into the ground to disperse projectiles more widely and target only the lower body. Skip-firing is banned by some organizations because the bullets carom so unpredictably.

- Sponge grenades are 40-millimeter rounds with foam noses that are slightly softer than their dense cores and deform when they hit a target. These are becoming the most common types of less-lethal projectiles, according to Cynthia Bir of the Wayne State University's ballistic-research lab. These large rounds spread the force of impact out over a larger area, reducing the chance of injury.

- Baton rounds, also called rubber bullets, can be made of foam, plastic, wood or rubber. They can be single rounds or multiple rounds packaged into one shell.

- Beanbag rounds are cloth bags containing lead pellets that fit into a cartridge. Beanbag rounds are intended to spread impact out over a larger area. Older square-shaped rounds have largely been replaced by sock-style bags, which are round and less likely to cause penetrating injuries.

Injuries from kinetic weapons are inevitable, experts say, and are part of the risk calculation.

"To deploy these rounds and expect no injuries is just unrealistic," Bir said, "even if just a bruise."

These projectiles can break bones, penetrate skin, fracture the skull, explode eyeballs and damage internal organs. Austin police critically injured a 20-year-old college student and bystander at a May 31 protest when a beanbag round hit him in the head.

Serious injuries are much more likely when projectiles are fired from close range. A direct hit to the chest could result in heart arrhythmia or broken ribs, which can puncture the lungs or heart. Blindness and abdominal injuries are among the more common permanent injuries.

Pepper spray: What it is

This oily substance, called oleoresin capsicum (OC) is derived from hot peppers and causes a painful burning sensation in the eyes, along with inflammation, excessive tears and redness.

Because OC is oily, it doesn't rinse away easily and pain can last up to 90 minutes.

The substance is delivered in different ways for different uses, all meant to incapacitate a person or group and blur their vision without causing permanent injury.

- Handheld sprays - just like the kinds mail carriers use to ward off angry dogs and citizens often use for personal protection - are routinely carried by law enforcement officers to use when subduing a suspect during an arrest. The device shoots a quick, precise aerosol stream into a person's face and works from up to about 12 feet away.

- Pepper balls are paintball-size projectiles that contain a powdered irritant similar to OC inside a thin membrane that bursts when it hits a person. They also target individuals but can be fired with paintball guns from farther away.

- Canisters and grenades, on the other hand, are considered much more serious uses of force because they produce indiscriminate chemical clouds that can affect everyone in their path. Large canisters are sprayed like fire extinguishers; smaller ones are fired like grenades. Both are used to subdue and disperse crowds.

Pepper spray can cause the same respiratory and cardiovascular problems as tear gas, and skin contact can cause burning, inflammation and allergic reactions.

Grenades and pepper balls can do all the damage mechanically fired projectiles can, including leaving welts and causing serious eye injuries. A bystander watching a protest in Omaha, Nebraska, on May 29 has permanent vision loss after being hit in the eye with a pepper ball.

Stun grenades, or flash-bangs: What it is

A stun grenade is a small canister filled with magnesium-based pyrotechnic chemicals. It is thrown or fired like a hand grenade.

Anyone who is very close to a stun-grenade blast could suffer serious burns, internal injuries from the shock waves - especially eardrum injuries - or puncture wounds from flying shrapnel if the canister breaks apart. The noise, 150 to 180 decibels, according to Physicians for Human Rights, is well past the "painful and dangerous" threshold set by the American Academy of Audiology.

A 2015 ProPublica investigation found cases of police losing hands and fingers and people being severely injured or killed by the devices, including a 19-month-old baby who was catastrophically wounded in 2014 when a stun grenade landed in his crib during a raid in Georgia.

Taser: What it is

A Taser uses electrical shocks to stop a person by causing painful and involuntarily muscle contractions. Current is delivered in five-second bursts by two electrodes that are attached to the device by insulated wires that can reach up to 20 feet away. (An officer can prolong the jolt to more than five seconds by holding the trigger down.)

Stun guns are similar, but they are pressed directly against a person.

Both types of weapons are used to control a single person rather than a crowd, and law enforcement officers do not appear to be using them often during recent protests.

But one incident captured national attention. Six officers in Atlanta were fired and criminally charged after they were filmed on May 30 breaking windows of a car, yanking a woman out and using a Taser on the male driver. Both were black college students stuck in traffic while trying to get home after a food run.

The manufacturer's warning lists many things, from burning, scarring and puncture wounds to seizures and respiratory and cardiac problems.

Injuries can result from falls when people lose muscle control. Muscle injuries and bone fractures can be caused by violent muscle spasms, particularly in people who have preexisting conditions.

This is not a comprehensive list. In the past two weeks, various law enforcement agencies have used many non-projectile and nonchemical tools, including batons, helicopters, riot shields and even horses, to attempt to control unrest.

These too are part of police use-of-force policies, which are often available to the public through the police departments themselves or through the Use of Force Policy Database.

But local police are not the only officers on the scene of many of the protests.

At least 16 law enforcement and military agencies responded to protests and unrest in Washington, and their policies about less-lethal force are not available to the public.

The U.S. Park Police initially denied using tear gas and rubber bullets to clear Lafayette Square on Monday. It's unclear what kinds of chemical irritants and projectiles Park Police officers do use, though, because their policies about less-lethal weapons are redacted in publicly available material.

National Guard policy varies from state to state. The Secret Service issued a statement saying it "does not discuss our protective means and methods," but in a later statement denied using tear gas at Lafayette Square.

In any case, policy - whatever it may be - sometimes does not match reality. Ultimately, the law enforcement officers are the ones deciding how much force to use.

“Less-lethal weapons are dependent on the person who deploys them,” Bir said. “It’s not just having them in your toolbox but knowing how, when and where to use it.”