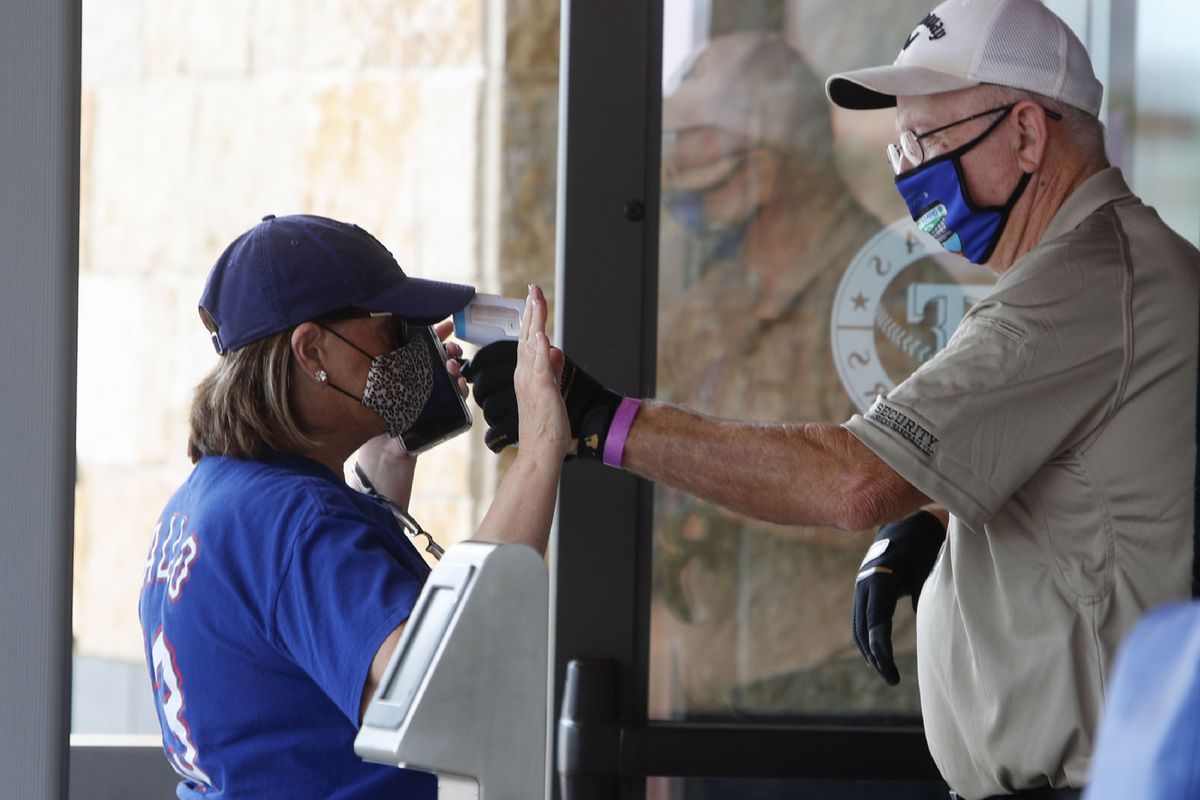 Amid concerns of the spread of the virus that causes COVID-19, a baseball fan has their temperature checked by a security guard before being allowed to tour Globe Life Field, home of the Texas Rangers baseball team in Arlington, Texas, Monday, June 1, 2020. The coronavirus pandemic has forced sports teams and their leagues to evaluate how they will welcome back fans. (AP Photo/LM Otero)

Amid concerns of the spread of the virus that causes COVID-19, a baseball fan has their temperature checked by a security guard before being allowed to tour Globe Life Field, home of the Texas Rangers baseball team in Arlington, Texas, Monday, June 1, 2020. The coronavirus pandemic has forced sports teams and their leagues to evaluate how they will welcome back fans. (AP Photo/LM Otero)

As the number of new coronavirus cases continues to increase worldwide, and at least a dozen states and Puerto Rico have recorded their highest averages of new cases since the pandemic began, hospitalizations in at least nine states have been on the rise since Memorial Day.

In Texas, North and South Carolina, California, Oregon, Arkansas, Mississippi, Utah and Arizona, there are an increasing number of patients under supervised care since the holiday weekend because of COVID-19 infections. The spikes generally began in the past couple weeks and in most states, are trending higher.

Data from states that are now reporting some of their highest seven-day averages of new cases are disproving the notion that the country is seeing such a spike in cases solely because of the continued increase in testing, according to data tracked by The Washington Post.

Texas has reported 75,616 cases since the pandemic began and in 10 of the past 15 days, the state's average new case number has hit a new high.

As of Tuesday, it has reported two consecutive days of record-breaking coronavirus hospitalizations. The state has seen a 36 percent increase in new cases since Memorial Day, with a record 2,056 current hospitalizations as of early Tuesday afternoon. It was up from a high of 1,935 hospitalizations on Monday.

Texas was one of the first states that decided to relax their state stay-at-home orders. Businesses started to open up in early May. According to the state's health department, Texas has 28.13 percent of available hospital beds open, and 1,723 available intensive care unit beds.

Arizona has also been struggling with its bed capacity. On Friday, Banner Health, one of the largest health-care systems in the country, confirmed that ICUs in Arizona were nearing capacity. Roughly 50 percent of all those hospitalized are in Banner Health facilities. As of Monday, 76 percent of all ICU beds in Arizona were in use, according to data from the state health department.

Arkansas has reported 10,080 cases, and in 11 of the past 15 days the state's average new case number has hit a high. It has had an 88 percent increase in new hospitalizations since Memorial Day. Arkansas had 173 hospitalizations reported on Tuesday, compared with 92 on May 25.

According to local reports, hospitals statewide remained below capacity on Monday and none of the new coronavirus cases had been linked to recent protests in the state.

The Carolinas have also seen a rise in hospitalizations, with North Carolina experiencing the second-largest spike in the nation behind Texas. North Carolina's upward trend began after Memorial Day. On May 26, the state reported 621 hospitalizations but two weeks later, that number has climbed to 774.

In South Carolina, hospitalizations sharply increased from the start of the week until Tuesday. In that 24-hour span, there have been 30 new hospitalizations, or a 6 percent jump, for a total of 507 COVID-19 patients. With the current spike, 12 counties in South Carolina have reached 75 percent or greater in hospital capacity, according to the state's health department.

In Utah, new COVID-19 cases are on the rise and as a result, so are hospitalizations. Utah's coronavirus task force tweeted that the state has seen a spike in COVID-19 cases, and it wasn't because of testing or a lone outbreak.

Similar to other regions, Utah's numbers have climbed steadily since Memorial Day, as the average number of new cases has increased 12 of the past 15 days. Over that two-week span, Utah has reported a 42 percent increase in hospitalizations and as of Tuesday afternoon, 230 patients were hospitalized with COVID-19.

Arizona tourist sites were packed for Memorial Day weekend. Lake Havasu, a popular vacation destination, was full, according to local officials. In South Carolina, a host of entertainment venues, including zoos, aquariums, water parks, etc., were allowed to open the weekend ahead of Memorial Day. In North Carolina, restaurants were allowed to open at reduced capacity, public pools at 50 percent capacity during Memorial Day weekend.

As of Tuesday, at least 110,000 people in the United States have died of COVID-19, the disease caused by the coronavirus, and almost 2 million cases have been reported.