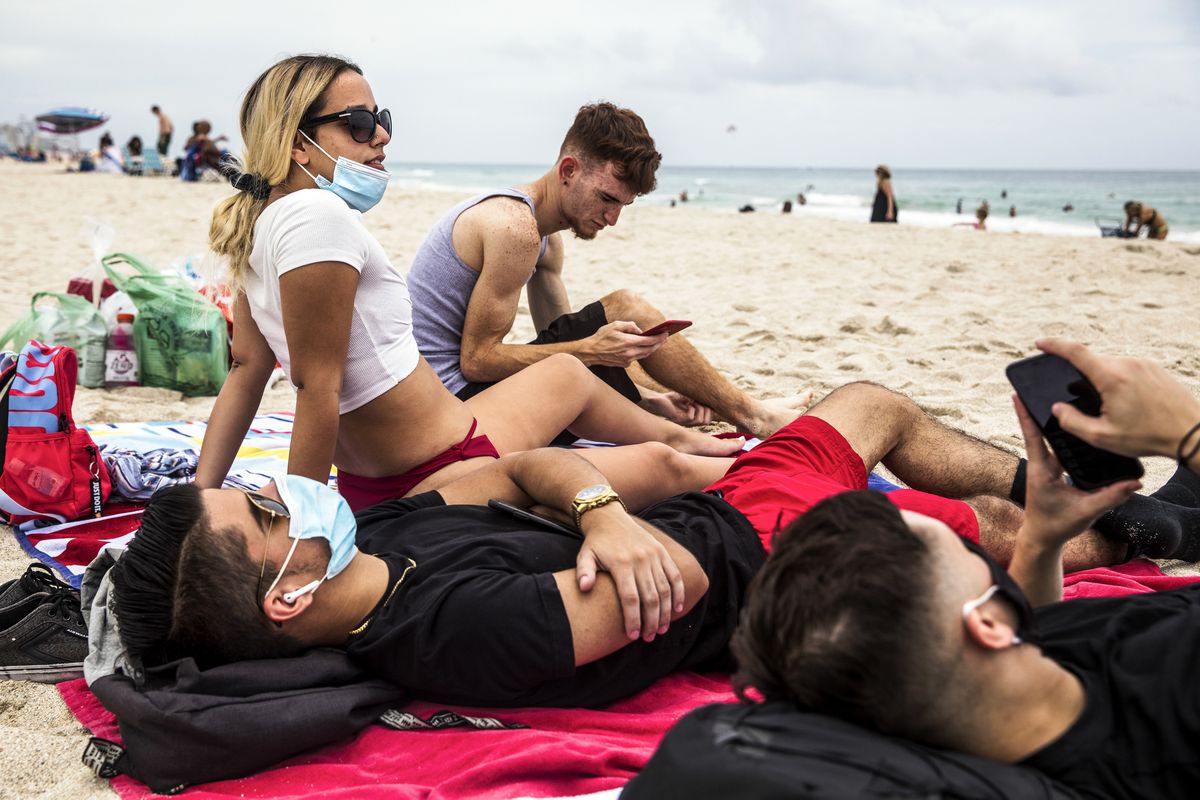 In the city of Miami Beach, Daniel Milian, from right, Miguel Martinez and Laura De Armas relax by the sea in South Beach on Friday with varying mask use. Whether to wear a mask in public has become fiercely controversial. Photo by Scott McIntyre for The Washington Post

In the city of Miami Beach, Daniel Milian, from right, Miguel Martinez and Laura De Armas relax by the sea in South Beach on Friday with varying mask use. Whether to wear a mask in public has become fiercely controversial. Photo by Scott McIntyre for The Washington Post

JACKSONVILLE, Fla. - Max Parsell hasn’t been wearing a mask during the coronavirus pandemic and doesn’t intend to start. It’s a matter of principle.

"Making individual decisions is the American way," Parsell, a 29-year-old lineman for a power company, said as he picked up his lunch at a barbecue joint at a rural crossroads south of Jacksonville. "I'll social distance from you if you want, but I don't want the government telling me I have to wear a mask."

Parsell need not worry: Gov. Ron DeSantis, a Republican, has not made mask-wearing mandatory here in Florida. That's in sharp contrast with what's happening more than 2,000 miles away in California, where Gov. Gavin Newsom, a Democrat, on Thursday reacted to rising caseloads by making mask-wearing mandatory.

In this sprawling, heterogeneous country, the pandemic has become yet another thing on which Americans are divided.

Mask-wearing for some people is an identifier of broader beliefs and political leanings. Like so many issues rooted in science and medicine, the pandemic is now fully entangled with ideological tribalism. This has played out before: helmets for motorcyclists, seat belts in cars, smoking bans in restaurants. All of those measures provoked battles over personal liberty.

Now it's masks and the coronavirus, with face coverings emerging as an emblem for what cleaves the nation. A flurry of recent studies supports wearing cloth face coverings as a means to limit transmission of the novel coronavirus, which causes the illness covid-19. To many people, masks represent adherence to civic duty and a willingness to make individual sacrifice for the greater good of public health. To others, masks symbolize government overreach and a violation of personal liberty.

President Donald Trump does not wear a mask, even when in the company of staffers and other officials who do. His press secretary, Kayleigh McEnany, said Friday that she will not wear a mask at the Trump rally Saturday in Tulsa.

"It's a personal decision. I'm tested regularly," McEnany said. "I feel that it's safe for me not to be wearing a mask, and I'm in compliance with CDC guidelines, which are recommended but not required."

The long-percolating politicization of masks reached a boiling point this week when a North Carolina activist in a group called Reopen N.C. plopped a mask in a pan, set it on fire and cooked a hot dog over the open flames.

That display came after Gov. Roy Cooper, a Democrat, said he was considering making mask-wearing mandatory in public spaces. Members of Reopen N.C. posted videos and graphics on Facebook instructing people to "remove your submission muzzle because you are not a sheep" and "douse submission muzzle with gasoline."

Less theatrically, many people in the United States who two months ago were appropriately alarmed by the spread of this invisible pathogen have been more mobile in recent weeks and looser in their social distancing.

"It's like this big giant hideous thing didn't just happen," said Jennifer Nuzzo, a Johns Hopkins University epidemiologist who has been staying near New York City and witnessed people congregating without masks.

But she said she understands that people have pandemic fatigue. They need options, she said, so they can resume important parts of their lives while remaining safe.

"Can we be creative? Seems like that is what is needed, because we can't just continue to say 'no.' That only works so long as people feel it's in their best interest to comply, but I'm afraid that is waning," she said.

The nation’s traditional emphasis on the rights of individuals distinguishes the United States from many other countries, said Anthony Fauci, director of the National Institute of Allergy and Infectious Diseases.

"I don't like to see people out in bars congregating without masks right now," Fauci said in an interview, but added, "We may have mayors and may have governors who are saying the right thing, but because of the individual spirit of our country, we don't listen to authority. You go to Korea, you go to Japan, when the authorities say something, man it gets done."

"When you're dealing with infectious diseases, a small percentage of people who don't comply can have an impact on the entire population," he said.

The United States has far more coronavirus infections than any other country. It has the most covid-19 deaths. The latest death toll tops 117,000.

Although New York City and other places in the Northeast have greatly reduced transmission of the virus and deaths linked to it, much of the country is still in its initial wave of infections.

The political structure of the country gave governors and mayors the power to decide how and when to reopen their economies, and some were more eager than others despite lingering community spread of the virus. An ongoing tug of war for authority between state and local officials has largely played out along partisan lines.

In Wisconsin, the Republican state legislature successfully sued to strike down Democratic Gov. Tony Evers's stay-at-home order, which many local leaders declared they would ignore. And in several states with Republican governors, including Arizona, Arkansas and Oklahoma, Democratic mayors have expressed frustration with a lack of aggressive action to halt the viral spread.

In Orange County, Calif., the board of supervisors said it would no longer enforce mask mandates locally, going against the wishes of health department officials. In Nebraska, Gov. Pete Ricketts, a Republican, told local authorities in his state not to mandate masks in municipal buildings - unless they wanted to lose out on their allocation of money from the federal Cares Act.

AMC, the sprawling movie house chain, made a proclamation of its own earlier in the week, declaring it would not mandate masks so as "not to be drawn into political controversy" - thereby drawing itself into political controversy anyway. But by Friday, reflecting the fluid nature of the pandemic and the decisions enveloping it, AMC had reversed course, announcing that it would insist on mask-wearing after all.

Compared with most countries, the United States has been quick to reopen, according to researchers at the Oxford University Blavatnik School of Government who have crafted a Stringency Index that tracks government shutdown orders and other interventions.

But multiple states, particularly in the South, Midwest and Southwest, are experiencing spikes in infections.

"We have right in front of us this unfolding crisis - this hurricane sitting there right on the radar," said Michael Osterholm, an infectious-disease epidemiologist at the University of Minnesota. "Yet we're still going about our business as though we're still going to be planting petunias tomorrow."

Fauci theorized that the disparate responses to the virus among people in the United States reflect a feature of the virus itself: Its effects are wildly variable. Some people remain asymptomatic after infection. Others become severely ill. Some die. That can be confusing for people.

Adding to that confusion is the fact that successful public health measures, including shutdowns and mandates to wear masks, can appear to be unnecessary. There is no easy way to calculate what might have happened if the measures hadn't been imposed.

Memorial Day weekend facilitated an explosion of self-determination, as pictures of packed pools and overflowing clubs - all enjoyed by people bereft of masks - left public health officials wringing their hands. Pictures of crowds packed into a pool at Backwater Jack's, a beloved local spot at Lake of the Ozarks in Missouri, drew national attention.

When the Camden County Sheriff's Office announced it had no authority to disperse attendees or hold accountable those organizing the aptly named Zero Ducks Given party, dozens of commenters flooded the department's Facebook page with messages of gratitude.

So far, health officials in the state say they do not think the gathering resulted in the catastrophic spread of coronavirus that some predicted. Backwater Jack's is planning a similar bash in a few weeks - "Zero Ducks Given, Fourth of July Edition."

The pushback against masks seems to have increased in recent weeks, in part because cases are rising in places largely untouched during the earlier parts of the pandemic. Since Memorial Day, at least 10 states have seen covid-19 hospitalizations rise at least 10 percent, according to a Post analysis of data.

Not all states report covid-19 hospitalizations, so the list may be longer. Florida, for example, is experiencing an explosion in cases but does not report hospitalization data.

In Arizona, Gov. Doug Ducey, a Republican, succumbed to pressure from local leaders and revised an executive order that had barred city leaders from instituting their own policies on face coverings.

Within 48 hours of Ducey's reversal, Phoenix Mayor Kate Gallego, a Democrat, had announced a mask mandate would be on the next City Council agenda. Tucson Mayor Regina Romero, a Democrat, announced an executive order mandating masks in her city, too.

Montgomery, Ala., has emerged as a virus hot spot in recent weeks, with cases increasing 73 percent in the surrounding county during June. Hospitals in the region are experiencing a strain on intensive care units and other resources. But when the city council voted on a measure that would have mandated masks in public among groups of 25 or more, the measure failed.

"This issue is too important, and the facts speak far too loudly for us not to take action," Reed said at a news conference.

In Jacksonville, Debra Rease is keeping close track of covid-19 news and doesn't like what she sees.

"As soon as they opened up, it started peaking again," said Rease, 68, a retired teacher and social worker.

"My sisters, my cousins that are over 60, we don't go anywhere," Rease said. "The only thing I do, I go outside where my daughter has a garden, and I go out and look at the garden, or I walk to the mailbox. That's it."

And when people do venture out, Rease said, she can scarcely believe they are forsaking masks.

"I see that, and I'm going, 'Aren't you looking at the news'? The numbers are going up, not down," Rease said. "People are just going to have to be patient and be cautious. If the doctors are telling you to wear your mask, wear your mask."

Rease's family has been in Jacksonville for generations. The street she lives on was named for her grandfather. Her great-grandmother, Amelia Kohn, who died at age 112 when Rease was a small child, had been enslaved in South Carolina before moving to Jacksonville after Emancipation. Rease said she misses going to church; before the pandemic, she would attend three times a week.

Rease recently wrote a letter to Jacksonville Mayor Lenny Curry, a Republican, asking him to withdraw his invitation to the Republicans to bring their national convention to town.

"With all that's going on with Covid-19 and the numbers for reported cases increasing, why would you put the health and welfare of the people of this city at risk?" Rease wrote.

She said she has received no reply.