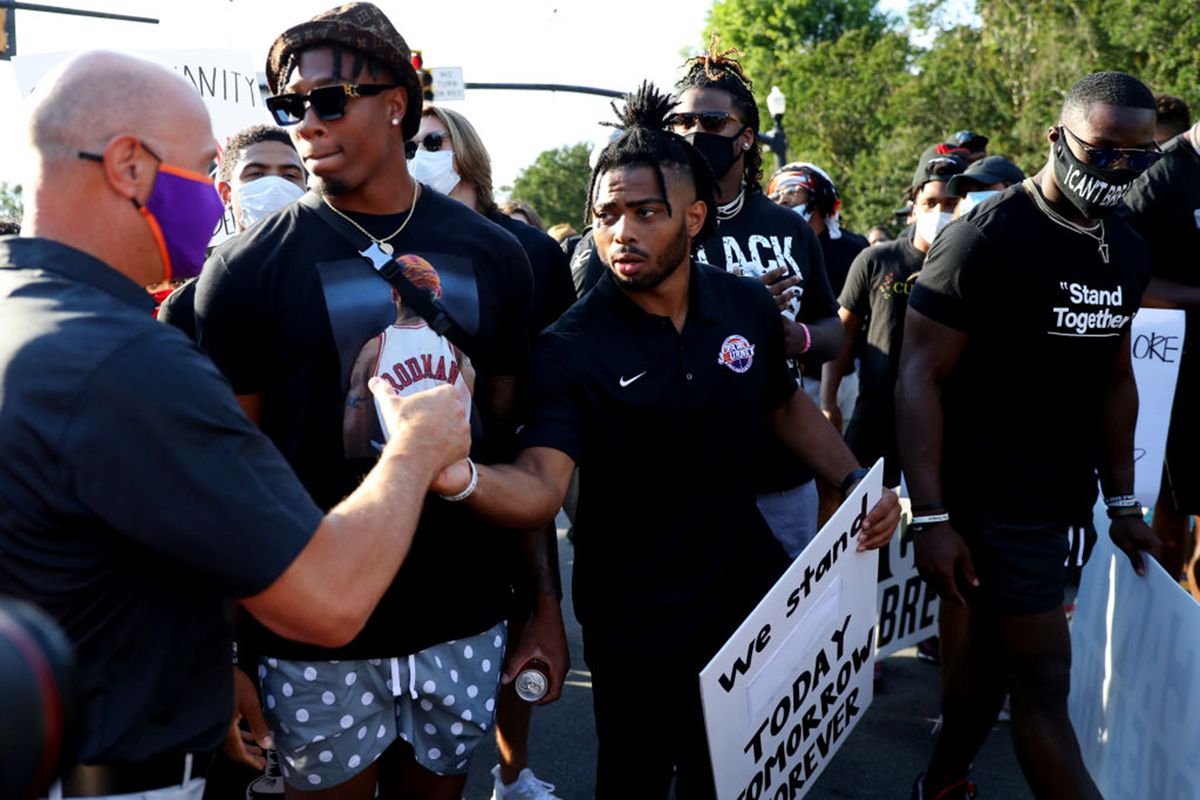 South Carolina racial justice activists said they would postpone future demonstrations or move them online after at least 13 people who took part in previous protests tested positive for the novel coronavirus.

As the number of cases across the country continued to climb ominously Monday, organizers of "I Can't Breathe" protests in South Carolina urged participants to get tested for the virus.

In a video posted Sunday on Facebook, organizer Lawrence Nathaniel said demonstrators who marched in Columbia, S.C., between May 30 and June 17 have tested positive. He said four organizers were confirmed infected, along with three photographers and six protesters.

"We need to do our part," he said. "Go get tested. Don't come to a protest until you get tested, OK?"

Nathaniel's warning came as 29 U.S. states and territories reported increases in their seven-day averages of new confirmed cases and daily totals continued to approach record levels not seen since March and April. Public health authorities blamed restriction-fatigued states that reopened before they had vanquished the virus while leaders of some of those states cited other factors.

In Florida, whose Republican governor, Ron DeSantis, pushed hard to reopen businesses in his state, infection totals shot past the 100,000 mark. Florida broke a state record Saturday when it reported 4,049 new cases. Its seven-day average of 2,386 daily new cases is 84% higher than the average number of cases reported a week ago, according to data compiled by The Washington Post.

DeSantis suggested last week that the surge could be attributed to increased testing and upticks of illness in migrant farmer communities, jails and long-term care facilities, WJXT-TV in Jacksonville reported.

In Texas, where Gov. Greg Abbott, a Republican, has taken a similar posture about reopening, the number of new cases and hospitalizations was continuing at an accelerated and "unacceptable" rate, Abbott said at a news conference Monday. But he said shutting down the state again remained a last resort.

Abbott said Texas is averaging about 3,500 new cases a day, more than double its daily rate of 1,500 in the last half of May. The rate of positive tests has soared to more than 9%, he said.

Abbott reiterated Monday that masks are still not required statewide and said forcing Texas to shut down again "will always be the last option." He said that if increases continue at their current rate, "additional measures are going to be necessary."

“To state the obvious, COVID-19 is now spreading at an unacceptable rate in Texas,” Abbott said, referring to the disease caused by the coronavirus.

Experts at the University of Texas Southwestern Medical Center forecast a 20% rise in cases in North Texas by early July. Their model, presented in an online forum Monday, showed that new cases have spiked among younger people.

"The recent growth appears to be primarily due to increased cases in younger age groups, especially those aged 21-40," they said in the analysis released Monday. "In June, 50 percent of hospitalized COVID-19 patients and 30 percent of ICU patients have been under 50 years old."

In all, the United States has seen about 2.3 million cases of COVID-19, the disease caused by the novel coronavirus, and more than 118,000 deaths, by far the largest numbers in the world, according to data compiled by The Washington Post.

New York City, one of the places bucking the trend of rising caseloads, allowed office buildings to reopen Monday in Phase 2 of its plan. Outdoor restaurants, hair salons and car dealerships also welcomed customers and workers again as the city, where the number of cases has dropped dramatically since the height of the pandemic, continued to relax public health restrictions.

The New York headquarters of the National Football League reopened its doors Monday with a restricted number of staffers allowed inside the building as officials estimated that between 150,000 and 300,000 employees would return to work in person citywide.

But many others will not. Goldman Sachs, The New York Times and others are not expecting employees to return until 2021. Major tech companies such as Facebook have gone further, telling employees that they can work from home permanently.

Also on Monday, President Donald Trump issued a proclamation that bars many foreign workers and curbs immigration visas through the end of the year, a move the administration characterized as necessary to protect U.S. workers after steep job losses from the pandemic, according to senior administration officials.

The freeze will apply to work visas that many companies use, especially in the technology sector, landscaping services and the forestry industry. It excludes agricultural laborers and some health-care workers and includes an exemption for the approximately 20,000 child-care providers who come to the United States as au pairs.

Concerns about protest-related infections began almost as soon as tens of thousands of demonstrators took to the streets nationwide to express anger about the death of George Floyd, a black man who died in Minneapolis police custody after a white police officer knelt on his neck for nearly nine minutes. Social distancing at many of the crowded protests was implemented, and some demonstrators and police officers did not wear masks.

Still, as of late last week, many cities where protests took place reported they had not traced infection surges directly to the mass gatherings.

Epidemiologists urged caution about writing off the possibility of protest-related outbreaks merely because the virus's 14-day incubation period had passed. Some experts estimate that case spikes could take as many as four weeks to appear in data, in part because a week or more can pass before someone infected shows symptoms, and additional time often passes before that person seeks a test.

Experts said the lag might be even longer because protesters were mainly young people who might not show symptoms. The virus often causes more severe symptoms in older people; experts said those who attended the street demonstrations might infect family or friends more likely to develop symptoms later.

Nathaniel, the South Carolina organizer, said his group was canceling several protests, including one that had been scheduled for Sunday. Organizers plan to wait until they can come up with a better way to ensure demonstrators' safety or until there is a decline in cases. He said he has been tested and is awaiting results.

Nathaniel said that protests will be moved online, and that his group will discourage street demonstrations after Wednesday, when a march is planned.

Across the United States, African Americans have been disproportionately affected by COVID-19. In South Carolina, blacks account for 36% of South Carolina’s confirmed cases and 46% of deaths despite making up 27% of the state’s population, according to The State, a newspaper.