US airlines and passengers grapple with enforcement of pandemic safety policies 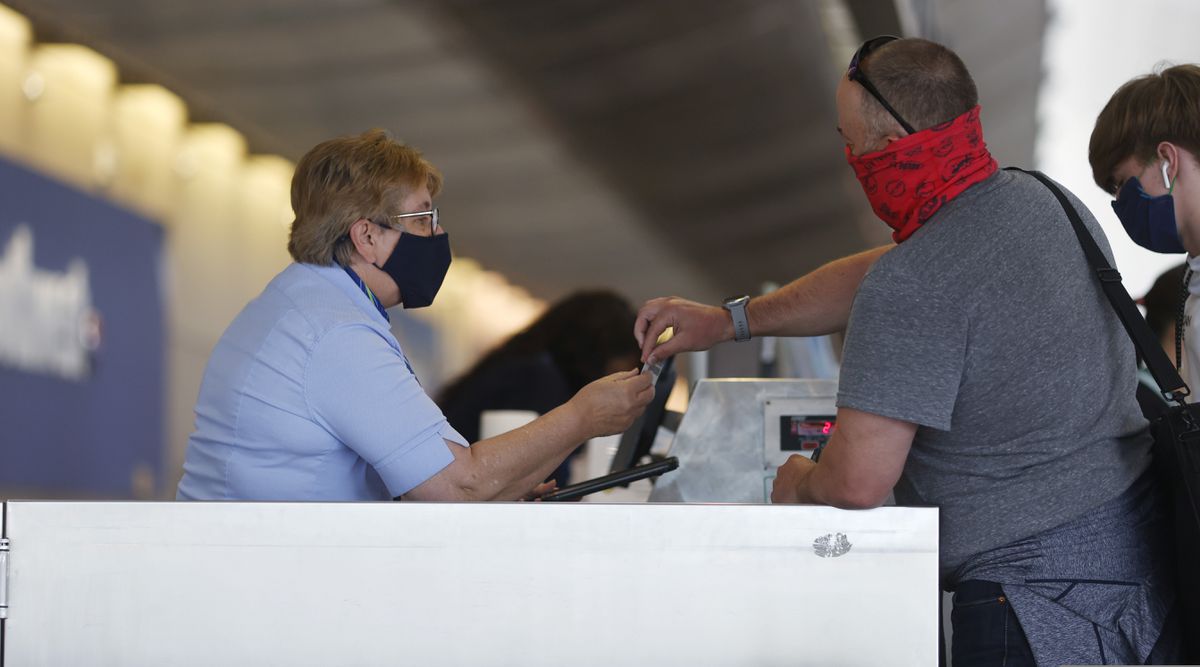 A traveler checks in with an agent at the counter for Alaska Airlines in the main terminal of Denver International Airport late Monday, June 22, 2020, in Denver during the coronavirus pandemic. (AP Photo/David Zalubowski)

A traveler checks in with an agent at the counter for Alaska Airlines in the main terminal of Denver International Airport late Monday, June 22, 2020, in Denver during the coronavirus pandemic. (AP Photo/David Zalubowski)

SEATTLE -- Ashley Musta said her first airline journey since the coronavirus pandemic struck will likely be her last for some time.

Musta, 32, of Issaquah, was left unnerved by an Alaska Airlines flight she took from Phoenix to Seattle on Thursday afternoon in which she said social distancing and other coronavirus safety measures were ignored. The plane boarded “like normal,” she said, with first-class and elite-status passengers going first — despite the Seattle-based airline’s new back-to-front boarding policy — resulting in people inching by her as she sat in the sixth row, premium economy, on the aisle.

Once airborne, she added, some passengers refused to abide by the requirement to wear masks when not eating or drinking.

“I would say half of the first-class cabin was not wearing their masks,” Musta said. “People in the rows nearby me were not wearing them, talking with them off.”

Airlines have touted enhanced cleaning and safety measures that include blocking middle-seat sales and eliminating alcohol to encourage social distancing and the use of masks. But rules vary in severity and enforcement; passengers have complained that even airlines with the strictest policies don’t always enforce them.

Douglas Kidd, executive director of the National Association of Airline Passengers, which advocates for travelers’ rights, said airline efforts have been “patchwork” and that the Federal Aviation Administration and Department of Transportation need to pass uniform emergency regulations for passenger loads and on-board behavior.

“We are concerned that in their rush to return to ‘business as usual’ and overcrowded aircraft cabins, the airlines are needlessly and recklessly risking the health and safety of their passengers and the general public,” Kidd wrote via email.

FAA director Stephen Dickson told a Senate committee last week his agency isn’t responsible for coronavirus safety precautions and that the Centers for Disease Control and Prevention must take the lead. “Our space is aviation safety, and their space is public health,” he said.

Musta couldn’t remember if flight attendants asked passengers to put on masks on Thursday. But just a few rows ahead of her, in the first-class cabin, Tiffany Fetters, 47, of Capitol Hill saw the cabin’s male flight attendant ask a couple directly behind her to wear theirs several times.

She said he told them: “If you don’t do it for you, do it for your grandmother,” but after they didn’t listen, he confided to her there wasn’t more he could do.

“I really felt for them trying to deal with this,” she said of crew members. “I can imagine how defeated they are trying to protect themselves and everyone else.”

She said the offending couple was seated across the aisle from another mask-less friend. At one point, a fourth person — also without a mask — got up from his seat and sat next to the couple’s friend.

They were “all hooting and hollering and having a good old time” throughout the flight. “The rest of us were just prisoners,” Fetters said. “There was nothing we could do.”

Willamette University law student Brittany Gerst, 25, felt the same way last Wednesday on an Alaska flight from Orlando to Seattle with her 13-year-old sister-in-law. “Nobody was wearing masks,” she said.

Their seats were at the back of the plane, so they boarded in the first group per the “back-to-front” policy. But, she said, there were already passengers seated in the plane’s front and middle sections. “I walked by a bunch of people and thought ‘OK, this doesn’t really work.”’

She grew more frustrated as others boarded.

“People were walking on the plane and they were just wearing the mask like a necklace,” she said. “They walked by three or four flight attendants and not one of them said anything.”

People around them were talking without masks. “There were many times that the flight attendants were talking to the people in front of me and not once did they say ‘Put your mask on,”’ Gerst said.

She worried about putting her father-in-law at risk because he’s in a vulnerable age group, and he was picking her up from the airport.

Alaska Airlines spokesperson Ray Lane said via email: “We rely heavily on our guests doing the right thing for the greater good of everyone on board our flights. When faced with a situation of noncompliance, our flight attendants use their training to help guide them on how to respond, and to learn more about why a guest is not wearing a mask or face-covering.”

As for forcing compliance, he added: “We’re evaluating other methods … and working with our unions on the best ways to do that.”

American Airlines, United, Delta and JetBlue have announced that passengers refusing to wear masks could be banned from future flights. The move came after American Airlines passenger Brandon Straka was pulled off a Dallas-bound flight in New York last Wednesday for refusing to don a mask.

On the boarding policy, Lane said Alaska is “making the transition” to back-to-front boarding. But passengers with disabilities will be allowed on first while first-class and elite members can “board at their leisure,” regardless of where seated.

Straka, a conservative influencer, founder of the #WalkAway campaign — which urges disaffected liberals to leave the Democratic Party — and a Fox News contributor, had planned to fly on from Dallas to Seattle to observe the Capitol Hill Organized Protest zone, or CHOP. He made it here on a different American flight — also not wearing a mask — but was then told by phone the airline was banning him for the duration of the pandemic.

Straka left Seattle on Friday on a different airline — again maskless, but he said nobody challenged him — for President Donald Trump’s campaign rally in Tulsa, Oklahoma. Straka said in a phone interview Friday he found CHOP demonstrators mostly reasonable compared to the backlash on his 400,000-follower Twitter account once his airline ban made national headlines.

“I have never received [such] death threats and hate — I mean, this was next level,” he said. “It’s slowed down a little bit, but it was just stacking up for the last 48 hours.”

Straka said he was making a point that masks are one of several “heavily politicized” pandemic issues. He’s tired of being told the proper way to act and behave by mainly Democratic politicians he feels have acted in a conflicting and contradictory manner — insisting people stay home and socially distance, then supporting their right to gather in large numbers at close proximity to protest police violence.

“If it’s something as important as fighting racism, the rules don’t apply,” he said. “And so, I guess … it’s a little confusing.”

The Airlines for America trade organization announced last week its member carriers — including Alaska, United, Delta, American, Southwest, Hawaiian and JetBlue — will start vigorously enforcing the wearing of face coverings for passengers. But it stopped short of setting a uniform enforcement policy, stating: “Each carrier will determine the appropriate consequences for passengers who are found to be in noncompliance of the airline’s face covering policy up to and including suspension of flying privileges on that airline.”

But Frontier Airlines, not part of the group, on Sunday removed a passenger in Los Angeles for not wearing a mask after he’d boarded a Denver-bound flight.

Some say merely enforcing mask policies isn’t enough if airlines let other precautions slide. While American and United were the first to threaten passenger bans, both have faced criticism on social media for not blocking sales of middle seats and flying planes at near capacity.

“Canceling flights and engineering an overcrowded plane is disingenuous. United’s actions have created a #COVID19 death trap,” United passenger Craig Harper tweeted Sunday, saying his 94-year-old father-in-law on a Wisconsin-bound flight was moved to a middle seat next to a stranger.

Seattle Times employee Allyson McKinney was on an American flight last week when she said the airline filled the middle seat between her and another passenger who’d purchased an aisle ticket explicitly to remain properly distanced. The airline had posted that it was limiting seats and would reassign passengers to create more space.

But American doesn’t guarantee the limits and isn’t capping flight capacity. When McKinney asked the flight attendant to be moved, she was told there were only middle seats left.

Musta, the Alaska passenger, welcomes stricter coronavirus safety measures. She said Alaska refunded her paid upgrade for the Phoenix flight and apologized for the inconvenience, but she’s already pulled out of a Thanksgiving trip booked on the airline and receiving future flight credits.

“I now have $500 in vouchers and I don’t plan on using that anytime soon,” Musta said. “Maybe a year from now if things are better.”