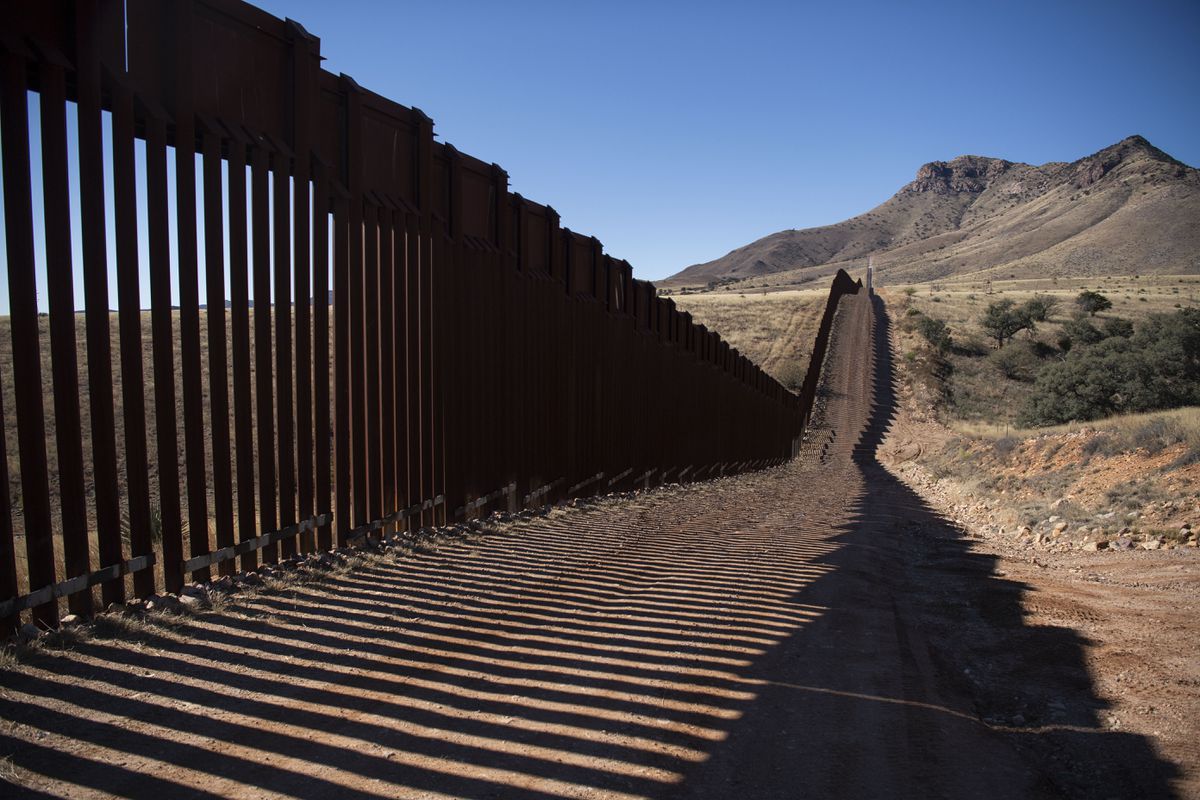 WASHINGTON - The Trump administration has awarded a major border security contract to a California technology start-up that will use artificial intelligence on an unprecedented scale, pairing the president’s giant steel barrier with the kind of “virtual wall” long favored by Democrats to prevent illegal crossings from Mexico.

The five-year agreement between U.S. Customs and Border Protection and Anduril Industries calls for the company to deploy hundreds of solar-powered mobile surveillance towers designed to operate in rugged locations. With cameras and thermal imaging, they detect moving objects and feed an artificial intelligence system capable of distinguishing among animals, humans and vehicles, sending location and mapping information right to the cellphones of U.S. patrol agents.

The effectiveness of the Anduril system in pilot programs so far, and the administration's deepening commitment to the technology, raises an obvious - if awkward - question for Homeland Security officials as President Donald Trump spends billions of taxpayer dollars to speed up his border wall project. If the Anduril system can spot migrants and smugglers from miles away and guide U.S. agents right to them, what is the point of building a costly physical barrier in isolated border areas where there are few crossings?

In their opposition to Trump's physical border barrier, many Democrats have promoted "smart" border technology as a more effective and cheaper alternative to the $15 billion concrete-and-steel version Trump is racing to install and which he is promoting on the campaign trail.

The CBP contract announced Thursday designates the Anduril system as a "program of record," meaning a technology so essential it will be a dedicated item in the Homeland Security budget. While it does not specify a dollar amount, Anduril executives said the agreement is worth several hundred million dollars.

CBP said in a statement Thursday morning that it plans to deploy 200 "Autonomous Surveillance Towers" by 2022. It says agents can set up the systems at a location along the border in just two hours.

"These towers give agents in the field a significant leg up against the criminal networks that facilitate illegal cross-border activity," Border Patrol Chief Rodney Scott said in the statement, which does not mention Anduril by name. "The more our agents know about what they encounter in the field, the more safely and effectively they can respond," Scott said.

Democratic presidential candidate Joe Biden has criticized Trump's border wall plans and said he will not spend money on physical barriers. If elected, he will face intense pressure to repudiate Trump's signature project and bring the bulldozers and excavators to a halt.

Anduril's contract leaves the company in a position to benefit regardless of the outcome in November, with an artificial intelligence system that could reinforce the president's physical wall or develop into the kind of virtual wall Democrats have said they prefer.

"No matter where we go as a country, we're going to need to have situational awareness on the border," Matthew Steckman, Anduril's chief revenue officer, said in an interview. "No matter if talking to a Democrat or a Republican, they agree that this type of system is needed."

Anduril's founder, 27-year-old Palmer Luckey, sold his previous company, Oculus, to Facebook for $3 billion in 2014. He was forced out at Facebook in 2017 after a donation to a pro-Trump group angered co-workers, but he denied that politics got him fired.

Luckey, who grew up in southern California's Orange County, cultivates a nerd-warrior image, dressing in flip-flops and Hawaiian shirts while running the company he named after a sword in "Lord of the Rings." Venture capital firms recently poured another $200 million into Anduril, which is now valued at nearly $2 billion, the company said Wednesday.

Steckman, who previously worked for Pentagon contractor Palantir, said Anduril's broader goal is to compete in the larger, more lucrative defense contracting market. The deal with CBP allows Anduril to showcase its artificial intelligence system, Lattice, as an all-seeing shield that can protect U.S. military bases and other strategic sites.

Anduril also has developed aerial drones that can be deployed to feed the Lattice system, but the company said it is not planning to use that equipment for its contract with CBP, and will rely instead on the tower-mounted mobile cameras.

Border security experts and Anduril executives say the Lattice system is a breakthrough in border technology, because the company claims the artificial intelligence software is capable of distinguishing between an animal and a human with 97% accuracy, reducing the number of times agents respond to sensors triggered by cattle, deer, peccary and other large mammals wandering the borderlands.

The system does not use facial recognition or other personal identification technology, minimizing the privacy concerns typically associated with the deployment of powerful government surveillance equipment across large open spaces. It is designed primarily for use in remote border regions with few people, not urban areas with more crossings, to provide agents with what the company calls "wide area understanding."

From the beginning of Trump's presidency, CBP officials embraced, and modified, his original vision for a Great Wall-style edification along the border, resulting in the see-through steel bollard design now under construction. CBP officials say the barrier is the physical anchor of a broader "wall system" that includes layers of surveillance technology, including cameras and sensors.

The Anduril system can be deployed in steep, mountainous areas where barrier construction is not feasible, or as a secondary layer with a panoramic view of new border fence.

CBP's previous, billion-dollar attempt to build a virtual wall ended in failure a decade ago, and in recent years Trump has often mocked Democrats' preference for such systems while touting his version.

"They'd say, 'No, no, we don't need a wall. We can have airplanes flying above. We can have pic- - people taking pictures. We can have drones,' " Trump said last month during a trip to the border in Arizona to commemorate the completion of 200 linear miles of new steel barriers. "I say, 'What are you going to do? Take pictures of everyone flowing across?'

"Walls are the greatest technology," the president said. "They work."

An irony of CBP's contract with Anduril is that during the past three years that the Trump administration has spent billions of dollars to put up a physical barrier, technological advances have finally made a virtual wall system feasible. The Lattice system relies on some of the same chip technology developed by Tesla and other companies for driverless cars, Steckman said.

CBP officials for years have been eager to develop more advanced surveillance systems, and they credit higher interdiction rates in recent years with improvements in their detection abilities, or "situational awareness."

"The desire of the Border Patrol for quite some time has been complete situational awareness for all the territory between ports of entry, but it's never been achieved because it was never invested in," said Ronald Vitiello, a 30-year Border Patrol veteran who served as acting director of Immigration and Customs Enforcement until Trump abruptly removed him last year.

Vitiello said he is skeptical a Biden administration will be willing to invest in Anduril because the Democratic Party's base is so intensely opposed to Trump's immigration policies. "I don't think the political winds will allow him to advocate for stronger border security or even smarter investments," Vitiello said. "I just don't see it, because the conversation around border security right now is so skewed."

Adam Isacson, a security analyst at the Washington Office on Latin America (WOLA), said the Anduril system"fits right into Democratic Party rhetoric about having smart border technology instead of a fifth-century wall."

But he cautioned it could clash with "post-George Floyd era concerns about law enforcement having too much power."

"It's hard to gauge where the Democratic Party is," Isacson said. "And some of the folks who were for border technology in the past may be less trusting, if given this new ability, of a law enforcement agency like the Border Patrol that has aligned itself so much with Trump."

Luckey's reputation as a Trump supporter could also hurt the company, Isacson added.

Department of Homeland Security officials say they remain on track to complete 450 miles of new barriers by the end of 2020. To add miles as quickly as possible, the Trump administration has been digging, blasting and bulldozing through national forests, wildlife preserves and other protected areas in western states where the federal government already controls the land.

Environmental groups and traditional ranching families along the border have watched with alarm as Trump's barrier bisects desert ecosystems, erases archaeological sites and cuts across stream channels and rivers. The Anduril system offers a low-impact, impermanent, greener alternative that appeals to landowners along the border.

William McDonald, a fifth-generation rancher in southern Arizona and lifelong Republican who has denounced the wall as destructive and wasteful, said "smart" border technology is unintrusive and effective. "It's already working where it's in place," he said. "It has a low impact on the environment and wildlife movement. It targets illegal crossers, period."

Large physical barriers are considered most effective in more urban areas of the border, where agents have less time to interdict someone and prevent them from getting into a vehicle. In more remote areas where agents are sparse, smugglers and border-crossers can breach or climb over barriers to advance northward, but the nearest road may be several miles away, giving Border Patrol a time advantage. Their biggest challenge is detection.

In 2010, then-DHS Secretary Janet Napolitano ended a CBP contract with Boeing to build a virtual wall system, SBInet, that was gathered information from electronic sensors along U.S. borders.

CBP officials say the government pulled the plug amid frustrations that agents were flooded with raw data and sensor input that didn't mesh with their existing enforcement tools and techniques.

Since then, Israeli defense contractor Elbit Systems has deployed sophisticated cameras in towers along the border, but its equipment is more expensive and less mobile than Anduril's, current and former CBP officials say. The Anduril towers have a smaller footprint and can be moved around easily, so they also help CBP avoid some of the land-use conflict issues that arise when the company requests access to tribal land, private property and environmentally sensitive areas.

Former CBP commissioner Kevin McAleenan, who resigned as acting DHS secretary last fall, established a "DHS Silicon Valley Initiative" in 2016 to pair experienced CBP officials with software engineers. The agency began working with Anduril when the company was being formed.

McAleenan said he is not aware of any other security firm developing a federal program of record so quickly.

"We took a company and technology solution from initial concept, to pilot, to widespread deployment in less than four years," McAleenan said in an interview. "That's unprecedented. That's how it should work."

The system Anduril has developed in concert with CBP is worth installing regardless of whether border wall construction goes forward, Steckman said, because U.S. agents need surveillance capabilities with or without a physical barrier.

"You can get those eyeballs through people or with an autonomous system," he said. "I would argue that because of the massive labor and cost reduction in not using people, this is a pretty good way to put eyes on whatever you need to put eyes on."

Steckman said the Lattice system is not built to capture personal information, only categories of moving objects.

"We know at a distance whether it's a person, it's a cow, it's a vehicle, it's an aircraft, it's a ship," Steckman said. "We don't know anything below that level, but for border security, especially in rural locations, that's enough to make a decision."

"Instead of a having a person's brain be the sensor fusion engine," he said, "the software surfaces information up to the point that a decision can be made, so the user can then go and do something about it."

The Washington Post’s Aaron Gregg contributed to this report.