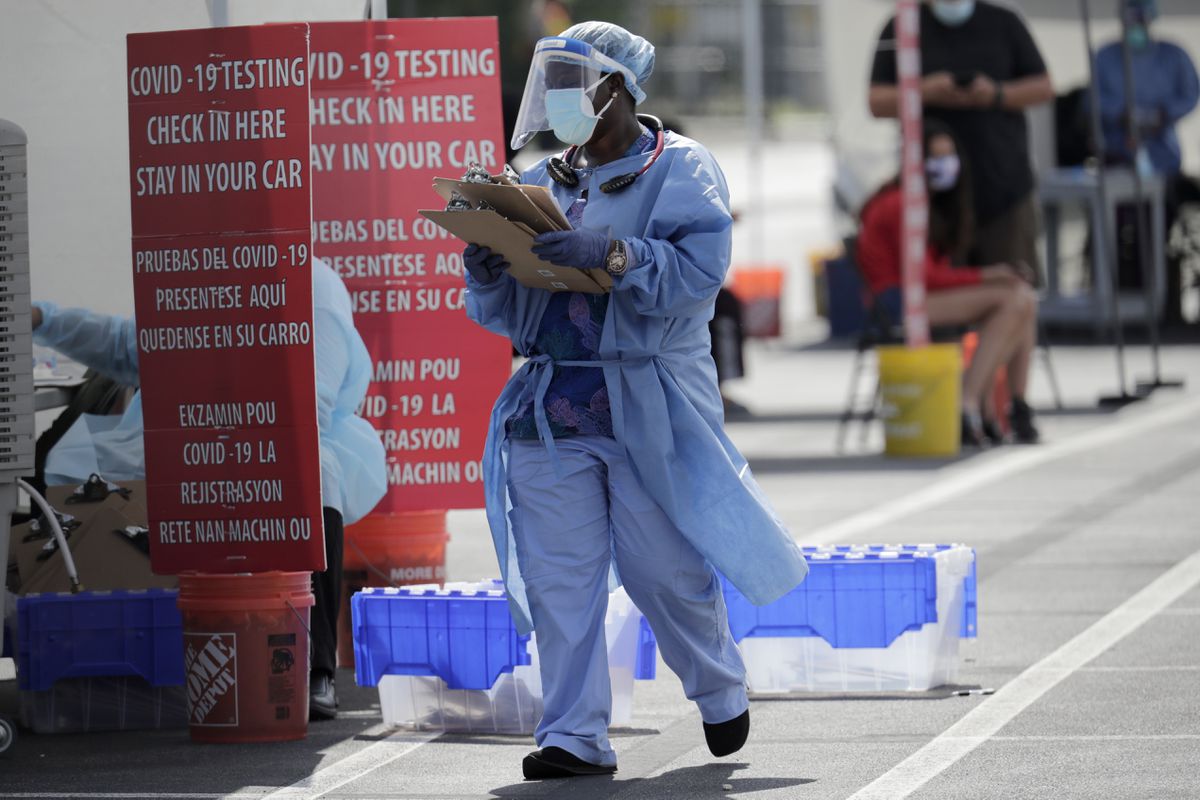 The pandemic map of the United States burned bright red Monday, with the number of new coronavirus infections during the first six days of July nearing 300,000 as more states and cities moved to reimpose shutdown orders.

After an Independence Day weekend that attracted large crowds to fireworks displays and produced scenes of Americans drinking and partying without masks, health officials warned of hospitals running out of space and infection spreading rampantly. The United States is "still knee deep in the first wave" of the pandemic, Anthony Fauci, the director of the National Institute of Allergy and Infections Diseases, said Monday

Fauci noted that while Europe managed to drive infections down - and now is dealing with little blips as it reopens - U.S. communities "never came down to baseline and now are surging back up," he said in an interview conducted on Twitter and Facebook with his boss, National Institutes of Health Director Francis Collins.

Despite President Donald Trump's claim that 99% of covid-19 cases are "harmless," Arizona and Nevada have reported their highest numbers of coronavirus-related hospitalizations in recent days. The seven-day averages in 12 states hit new highs, with the biggest increases in West Virginia, Tennessee and Montana. The country's rolling seven-day average of daily new cases hit a record high Monday - the 28th record-setting day in a row.

In Arizona, 89% of the state's ICU beds were full Monday morning, the state's Department of Health announced, as the recently hard-hit state surpassed 100,000 cases.

In Miami-Dade County, authorities reversed course on a reopening plan, issuing an emergency order that shut down gyms, party venues and restaurants, with exceptions for takeout and delivery. That order will go into effect Wednesday. Florida has seen its caseload soar past 10,000 per day and 200,000 overall.

"We want to ensure that our hospitals continue to have the staffing necessary to save lives," Miami-Dade Mayor Carlos Gimenez, a Republican, said in his announcement.

Gimenez said the spike has been driven by infections among 18- to 34-year-olds who have been gathering in congested places - indoors and out - without wearing masks and maintaining proper distancing.

"Contributing to the positives in that age group, the doctors have told me, were graduation parties, gatherings at restaurants that turned into packed parties in violation of the rules and street protests where people could not maintain social distancing and where not everyone was wearing facial coverings," Gimenez said.

Despite the steep new rise in infections, the House and Senate have adjourned for a two-week recess, setting up a potential battle when they return over another pandemic relief package.

And more politicians continue to contract the virus. In Mississippi, where cases are rising, several lawmakers have tested positive, including the speaker of the State House of Representatives. Republican Gov. Tate Reeves wrote on Twitter he was "briefly in contact" with one of them, so he plans to isolate himself until he gets his own test results back. Atlanta Mayor Keisha Lance Bottoms, a Democrat, tweeted Monday evening that "COVID-19 has literally hit home. I have had NO symptoms and have tested positive."

Some states imposed fresh restrictions on Monday in an attempt to tamp down rising case numbers and preserve hospital capacity.

West Virginia Republican Gov. Jim Justice announced that face coverings will be mandatory inside buildings, and he asked residents to comply voluntarily. West Virginia hit an all-time peak of 130 new cases in one day on Sunday, putting its total at 3,356 cases.

Local ABC affiliate WCHS reported that Justice added that he had put off mandating masks but eventually decided "it is the very thing I want to do the most because I know in my heart if we don't, we are going to have funeral after funeral."

Universities, quickly approaching their fall semesters, also were grappling with how to provide an education without risking student health.

Harvard University announced Monday it will reopen with fewer than half of its undergraduates on campus, a sign of the extraordinary constraints colleges face across the country as they map out plans for the fall term. No more than 40% of Harvard's undergrads will live at the Ivy League campus in Cambridge, Mass., when the school year begins, the university said. Most of them will be first-year students, who will get priority access to help them adjust to college life. All undergraduate courses will be taught remotely, the university said, no matter where the students are living. Tuition will remain the same.

Public health officials have been pleading with younger people to take the virus more seriously, as new cases among that demographic has driven spikes in several places. Fauci on Monday called on young people to realize that they are not "invulnerable to serious consequences" of the virus. Even though they may not get sick enough to end up in the hospital, they still could get "very sick" for weeks, he said. And by getting infected, he added, "they are propagating the outbreak" and might inadvertently infect someone vulnerable, with potentially fatal outcomes.

Though largely considered less vulnerable, young children have shown susceptibility as people try to return to their normal routines. The Texas Department of Health and Human Services reported Monday that at least 1,335 people have tested positive at child care facilities, and about a third of the cases were children.

President Donald Trump and his campaign have increasingly argued that Americans need to continue to live their lives despite the pandemic. On Monday afternoon, Trump tweeted, in all caps, "SCHOOLS MUST OPEN IN THE FALL!!!"

Trump has played down the rise in cases, attributing it to expanded testing, and has recently emphasized that U.S. deaths have not spiked with new cases. He tweeted on Monday: "The Mortality Rate for the China Virus in the U.S. is just about the LOWEST IN THE WORLD!"

Other Republicans have struck a more serious tone. Senate Majority Leader Mitch McConnell, R-Ky., on Monday said: "This is not over."

"We had hoped we'd be on the way to saying goodbye to this health-care pandemic. Clearly it is not over," McConnell said at a news conference at a Louisville food bank. Public health officials in both parties have criticized the Trump administration for dismissing science and expertise in its handling of the pandemic. Dozens of former government scientists on Monday called for a science-based approach.

"Sidelining science has already cost lives, imperiled the safety of our loved ones, compromised our ability to safely reopen our businesses, schools, and places of worship, and endangered the health of our democracy itself," wrote officials from the Trump, Obama, and George W. Bush administrations.

Another group of more than 200 scientists from dozens of countries urged the World Health Organization to take more seriously the possibility of airborne-transmission of the virus, saying there is growing evidence that it can linger in the air indoors in small aerosol particles. More than 11.5 million cases have been reported worldwide.

Also on Monday, the U.S. Food and Drug Administration granted an emergency use authorization for a rapid, point-of-care covid-19 diagnostic test that can yield results within 15 minutes, medical technology company Becton Dickinson announced.

The new antigen test that detects the presence of the virus will be used in conjunction with another diagnostic tool from the company that is in use in more than 25,000 hospitals, medical centers and retail pharmacies across the country.

Dave Hickey, president of Integrated Diagnostic Solutions for Becton Dickinson, said in a statement that the test will be a "game changer" for health-care workers and patients.

In May, the FDA issued an emergency approval for the first covid-19 antigen test that was made by Quidel Corp.

Fauci and Collins ended their 30 minute session on Monday with something of a pep talk."We will get through this," Fauci said. "We have already suffered through a lot of pain, a lot of economic and personal pain and inconvenience." He said "science will get us through this" by delivering drugs for early- and late-stage covid-19.