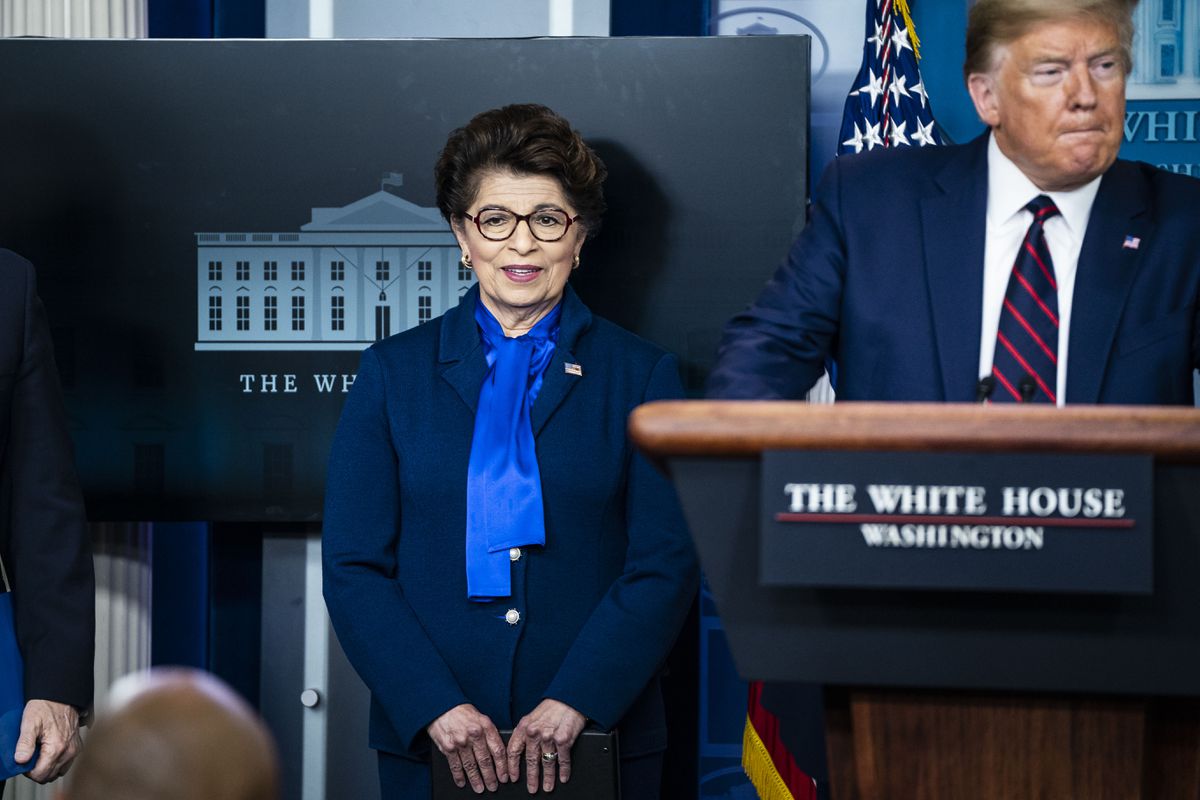 WASHINGTON - Data released Monday by the Small Business Administration shows that businesses owned by members of Congress and a law practice that represented President Donald Trump were among the hundreds of thousands of firms that received aid from the agency.

As part of its $660 billion small-business relief program, the Small Business Administration (SBA) also handed out loans to private schools catering to elite clientele, firms owned by foreign companies and large chains backed by well-heeled Wall Street firms. Nearly 90,000 companies in the program took the aid without promising on their applications that they would rehire workers or create jobs.

The data, which was released after weeks of pressure from media outlets and lawmakers, paints a picture of a haphazard first-come, first-serve program that was not designed to evaluate the relative need of the recipients. While it buttressed a swath of industries and entities, including restaurants, medical offices, car dealerships, law firms and nonprofits, the agency did not filter out companies that have potential conflicts of interest among influential Washington figures.

Several major chains owned by big investment firms, including PF Changs, Legal Sea Foods, and Silver Diner, received millions of dollars, which may renew questions about whether large companies with Wall Street connections should accept the money or not. Over the past weeks, dozens of publicly traded companies returned money after they were told by the Treasury Department that the program was not meant for large, well-capitalized companies.

Companies applying for the money were required to certify that the money was "necessary to support the ongoing operations," while taking into account "their ability to access other sources of liquidity," the SBA's website states.

Treasury and SBA spokespersons declined to comment. Other administration officials declined to speak on the record about the data.

"We think we've done a reasonably good job of suggesting that those who were not going to be able to meet the certification should have returned money," said one senior administration official, speaking on the condition of anonymity to follow the administration's rules for releasing the information.

Among some of those receiving relief were Transportation Secretary Elaine Chao's family's shipping business. At least eight members of Congress or their spouses received loans, including lawmakers who were directly involved in shaping regulations and also benefited from a blanket waiver of ethics concerns. (Chao is married to Senate Majority Leader Mitch McConnell, R-Ky.)

Among the loan recipients disclosed is KTAK Corporation, a Tulsa-based operator of fast food franchises owned by Rep. Kevin Hern, R-Okla. Hern had advocated to increase the size of loans available to franchises, including in a March letter to McConnell and Senate Minority Leader Chuck Schumer, D-N.Y.

KTAK reported receiving between $1 million and $2 million to support 220 jobs. Hern spokeswoman Miranda Dabney said the letter was "a bipartisan idea meant to simplify the way loans were calculated," and said the franchise rule that Hern advocated for did not benefit KTAK because it employs fewer than 500 people.

"These PPP [Paycheck Protection Program] loans are all about paying employees so any expansion or increased funding measures were aimed at helping employees of franchisees stay employed," Dabney said. "The whole program was designed to keep people off of unemployment."

Rep. Mike Kelly, R-Pa., benefited when three of his car dealerships in the Pittsburgh area received a total of between $450,000 and $1.05 million to retain 97 jobs, according to the data.

Kelly is not involved in the day-to-day operations of his auto dealerships, said spokesman Andrew Eisenberger, and did not participate in discussions between the dealerships and the PPP lender.

Several plumbing businesses affiliated with Rep. Markwayne Mullin, R-Okla., all based in Broken Arrow, Okla., each received between $350,000 and $1 million. A spokeswoman said Mullin is not involved in the day-to-day operation of his businesses.

Craig Holman, an advocate from the watchdog group Public Citizen, said policymakers involved in shaping the program should not be allowed to profit off of taxpayer-backed loans.

The lawyer who represented Trump in the investigation of Russian election interference, as well as dozens of tenants of Trump's real estate company, received money, the latest in a series of instances in which Trump's company and his government have overlapped.

At 40 Wall Street, an office building Trump owns in Manhattan, 22 companies received loans, for a combined total of at least $16.6 million. The recipients included mortgage giant Countrywide, the pro-Israel group Hadassah, the Girl Scout Council of Greater New York, and the engineering and consulting firm Atane, according to the data.

Triomphe Restaurant Corp., which operates the Jean-Georges Restaurant at the Trump International Hotel on Central Park West, got between $2 million and $5 million. Sushi Nakazawa, a restaurant in the Trump D.C. hotel, received between $150,000 and $350,000 to support 22 jobs, according to the data.

No one from the firm had any contact with anyone in the Trump administration about the PPP loan, said spokeswoman Emily Thall. She said the loan was coordinated through the bank without the partners' involvement and along with other copst-saving measures "enabled us to preserve the jobs of our hundreds of employees at full salary and benefits without interruption."

Other administration officials benefited as well. Foremost Maritime, a shipping business controlled by the family of Chao, the transportation secretary, also received money from the program - between $350,000 and $1 million, according to the SBA data. The company was founded by her parents, James S.C. Chao and his wife, Ruth Mulan Chu Chao, while her sister, Angela Chao, is the current chief executive.

Chao did not respond to a request for comment.

Steve Ellis, president of Taxpayers for Common Sense, said a line should be drawn with policymakers who are directly involved in charting the path of federal funds.

"You can write the policy to be blind to the nature of the entities, but certainly if you are involved in drafting it, or modifying it to benefit certain businesses, that's where the alarm bells should be raised," said Ellis.

The PPP disclosure includes the names of 660,000 small businesses and nonprofit organizations that received at least $150,000 in funding. Although that is less than 15% of the total number of loans, it is the most detailed disclosure yet on one of the largest economic stimulus packages created by the federal government, part of the $2 trillion Cares Act.

The data shows that the government issued $521 billion in loans in all, with an average loan size of $107,000. Treasury and SBA officials say the program helped support around 51 million jobs, according to self-reported data provided by borrowers. They said that accounts for 84% of all employees working at small businesses, based on Census Bureau data.

Recipients of loans between $5 million and $10 million include several prominent restaurant owners: PF Changs, a chain of more than 200 U.S. restaurants acquired by Paulson & Co and TriArtisan Capital Advisors last year; Legal Sea Foods, a chain whose investors include Graycliff Partners; and Silver Diner, the chain of diners listed as part of the portfolio of Goode Partners.

PF Changs issued a statement saying its leadership team "sought additional funding so we could continue to operate our restaurants and keep team members employed."

"As a direct result of receiving the PPP loan, we have been able to keep more than 12,000 team members on the job and most of our restaurants open throughout this crisis with a modified offering of takeout and delivery as mandated by jurisdictions," the company said. Other companies did not respond to requests for comment.

Questions remain however about how the program has impacted jobs. The program's rules require that borrowers show their lenders how many jobs they have retain to have their loans forgiven.

Among the loan recipients, 48,922 reported zero as the number of jobs they would retain with the money, and 40,506 applicants appeared to leave that section blank. It appeared that 10 other companies received between $5 million and $10 million but reported retaining only one job with the money they received.

Borrowing from the program has slowed to a trickle despite Congress and officials at the Treasury Department and the SBA repeatedly loosening the rules to allow more companies to receive funds and making it easier for borrowers to have the loans forgiven and turned into grants, as most are.

Questions about when and how data would be released have dogged the program almost since its launch. The government's failure to release information on the loans as they were issued prompted 11 news organizations, including The Washington Post, to file a Freedom of Information Act lawsuit seeking business names and loan amounts for all PPP recipients.

The agencies missed a deadline to release the information Thursday as planned.

"We were really trying to verify the data and just clean it up. We wanted to make sure it was as accurate as possible," said the senior administration official.

Government transparency advocates said the public should have access to detailed information about every loan provided with government funding.

"This data is a good start, but totally insufficient," said Danielle Brian, executive director of the nonprofit Project on Government Oversight.

About half of the money went to five industries. The health-care and social assistance industry received 12.9% of the money; 12.7% went to professional and technical services; 12.4% went to construction; 10.3% went to manufacturing; and 8.1% went to hotels, restaurants and other food service employers.

Foreign firms were not barred from receiving money, and Korean Air received a loan of $5-10 million, according to the data. The South Korean airline reported sales equivalent to $11 billion in 2019, and Jill Chung, a company spokeswoman, said it received the loan to aid its small American operation, which Chung said employs about 500 people and has been hard hit by the downturn in travel caused by the pandemic.

Other borrowers are in controversial fields but were nonetheless eligible to receive support.

Numerous defense contractors and gun companies listed were among the recipients of loans totaling $2 million or more. The data also lists 43 Planned Parenthood locations that received a combined $60 million in loans, funds that prompted 127 Republican lawmakers to call for a federal investigation. The SBA sent letters to dozens of Planned Parenthood affiliates ordering them to give back the money, but the data released Monday does not indicate whether any of the loans were returned.

Congress passed legislation last week extending the deadline to apply to through Aug. 8 and are considering how best to repurpose money that is left over. About $130 billion remains in the program, and the administration plans to release more data about the program after that deadline.