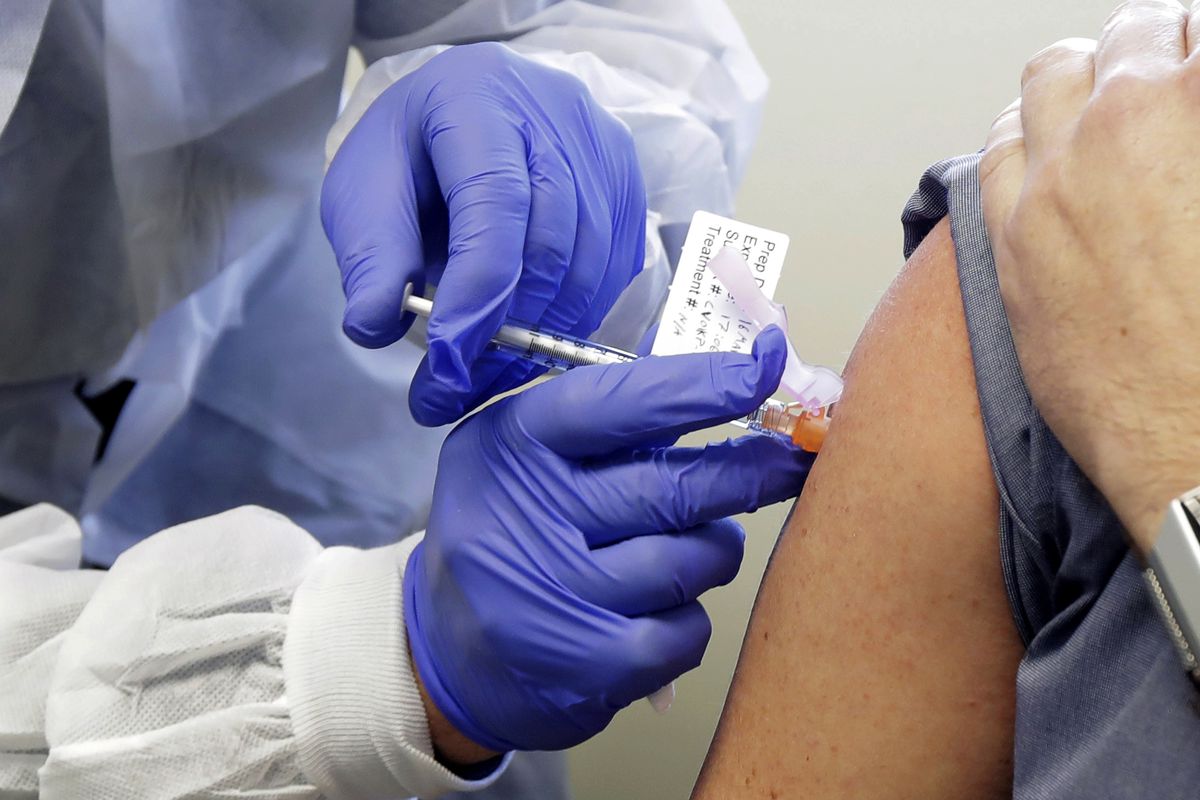 A patient in March receives a shot in the first-stage safety study clinical trial of a potential vaccine for COVID-19 at the Kaiser Permanente Washington Health Research Institute in Seattle. (AP Photo/Ted S. Warren, File)

A patient in March receives a shot in the first-stage safety study clinical trial of a potential vaccine for COVID-19 at the Kaiser Permanente Washington Health Research Institute in Seattle. (AP Photo/Ted S. Warren, File)

The Trump administration has awarded a contract worth $1.6 billion to a Maryland biotechnology company to develop a coronavirus vaccine, the largest bet yet by the federal government on an individual vaccine to combat the pandemic.

The deal with Novavax, a publicly traded company based in Gaithersburg, will pay for late-stage clinical trials and secure 100 million doses of the vaccine to be used by the United States, the company said Tuesday. Novavax already has an ambitious manufacturing plan underway and said it expects to have 100 million doses ready for distribution in late 2020 and early 2021, if clinical trial data shows the vaccine is safe and effective.

Novavax is among multiple companies pushing ahead with manufacturing plans without yet knowing whether their vaccines will work, a strategy designed to speed a vaccine to the population as rapidly as possible. The company is hiring dozens of employees. It recently bought a manufacturing facility in the Czech Republic and is lining up contract manufacturers around the world to produce additional doses.

"Unprecedented is the only way to describe it," Novavax chief executive Stanley C. Erck said in an interview, describing the compressed timeline. "It normally takes years to get there."

The Novavax contract award via President Donald Trump's Operation Warp Speed vaccination effort eclipses the $1.2 billion deal struck with AstraZeneca in May for 300 million doses of the vaccine. The government also has vaccine development contracts with Moderna and Johnson & Johnson that each fall in the range of hundreds of millions of dollars.

The government is funding the development of multiple vaccine candidates based on an assumption that some may not work. Of those that are effective, more than one vaccine probably will be required to inoculate billions of people in the United States and around the world against the virus.

"Adding Novavax's candidate to Operation Warp Speed's diverse portfolio of vaccines increases the odds that we will have a safe, effective vaccine as soon as the end of this year," U.S. Health and Human Services Secretary Alex Azar said in a news release. Producing a vaccine by the end of 2020 is a highly optimistic timeline, according to experts. Developing a successful vaccine typically takes multiple years.

Anthony S. Fauci, director of the National Institute for Allergy and Infectious Diseases and a key member of Trump's coronavirus response team, has said early to mid-2021 is the most likely schedule for the first vaccines to become available.

Novavax has genetically engineered a coronavirus spike protein that is expected to trigger an antibody response in the human body. The company does not yet have any products on the market, according to its website, but is working on vaccines for influenza, Ebola, respiratory syncytial virus and Middle East respiratory syndrome. It has received $388 million for coronavirus work from the nonprofit Coalition for Epidemic Preparedness Innovations, the company said in March.

In May, it launched a Phase 1 safety and efficacy trial in 130 people in Australia, with preliminary results expected this month, the company said. The government award of $1.6 billion was based on lab, mouse and ape studies shown to government officials, Erck said.

"You can have a pretty high level of expectation that what we showed in our baboon study will play out in humans,'' he said.

Phase 1 has not resulted in any safety problems, he added. A Phase 2 trial involving 1,000 to 2,000 people, comparing the Novavax vaccine against a placebo, is expected to start in August in Australia and possibly the United States, Erck said. It will take roughly 60 days.

Initial Phase 3 results in 30,000 people may be available by the end of the year, although finding the right population experiencing an outbreak remains a challenge, he said.

The company’s stock has risen dramatically as hopes rose about its potential vaccine. Its stock traded below $5 in January, and as of Monday’s close it was nearly $80.