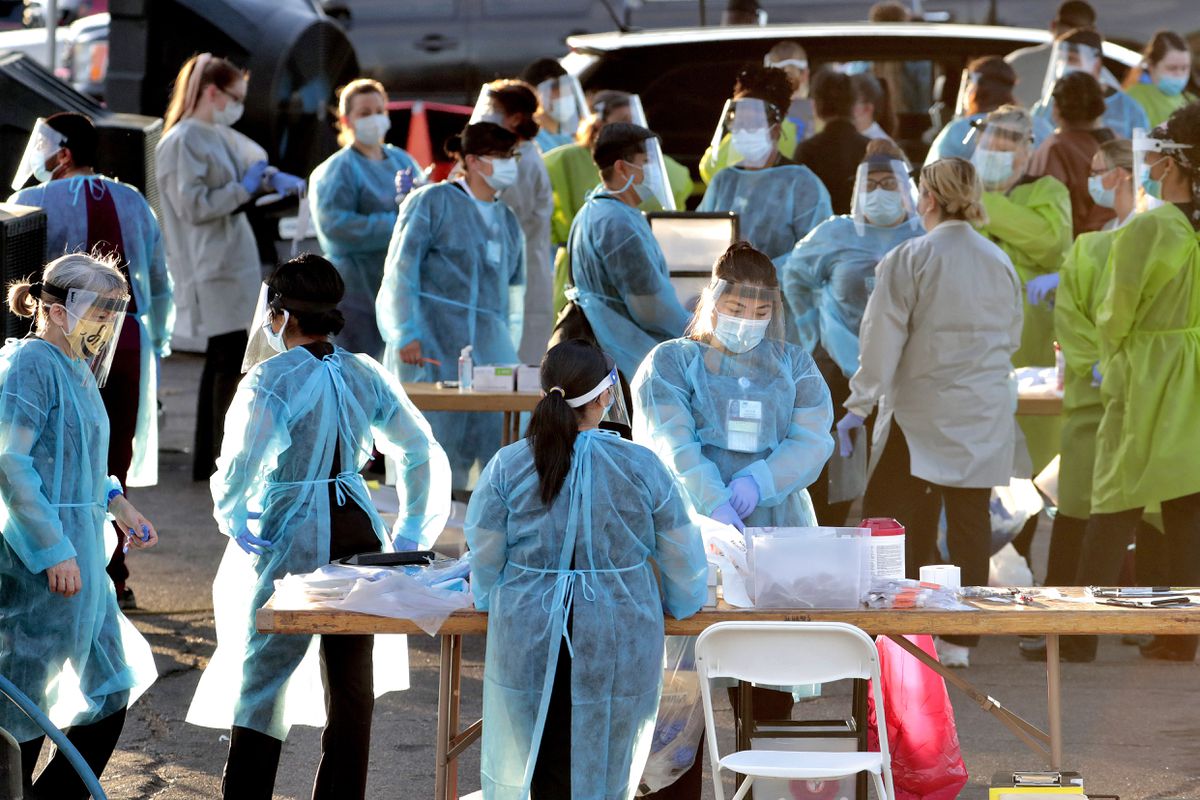 FILE - In this June 27, 2020, file photo, medical personnel prepare to test hundreds of people lined up in vehicles in Phoenix's western neighborhood of Maryvalefor free COVID-19 tests organized by Equality Health Foundation, which focuses on care in underserved communities. The personal protective gear that was in dangerously short supply during the initial weeks of the coronavirus crisis in the U.S. is running out again as the virus resumes its rapid spread and the number of hospitalized patients climbs. (AP Photo/Matt York, File)

FILE - In this June 27, 2020, file photo, medical personnel prepare to test hundreds of people lined up in vehicles in Phoenix's western neighborhood of Maryvalefor free COVID-19 tests organized by Equality Health Foundation, which focuses on care in underserved communities. The personal protective gear that was in dangerously short supply during the initial weeks of the coronavirus crisis in the U.S. is running out again as the virus resumes its rapid spread and the number of hospitalized patients climbs. (AP Photo/Matt York, File)

The personal protective gear that was in dangerously short supply during the early weeks of the coronavirus crisis in the U.S. is running low again as the virus resumes its rapid spread and the number of hospitalized patients climbs.

A national nursing union is concerned that gear has to be reused. A doctors association warns that physicians' offices are closed because they cannot get masks and other supplies. And Democratic members of Congress are pushing the Trump administration to devise a national strategy to acquire and distribute gear in anticipation of the crisis worsening into the fall.

"We're five months into this and there are still shortages of gowns, hair covers, shoe covers, masks, N95 masks," said Deborah Burger, president of National Nurses United, who cited results from a survey of the union's members. "They're being doled out, and we're still being told to reuse them."

When the crisis first exploded in March and April in hot spots such as New York City, the situation was so desperate that nurses turned plastic garbage bags into protective gowns. The lack of equipment forced states and hospitals to compete against each other, the federal government and other countries in desperate, expensive bidding wars.

In general, supplies of protective gear are more robust now, and many states and major hospital chains say they are in better shape. But medical professionals and some lawmakers have cast doubt on those improvements as shortages begin to reappear.

Dr. Aisha Terry said that she has good access as an associate professor of emergency medicine at George Washington University in Washington, but some non-academic and rural health facilities have much less.

"I think overall, production, distribution and access has improved," Terry said. "But the fear is that we will become complacent" and allow supplies to dwindle in some places.

In a letter to Congress last week, the health department in DuPage County, Illinois, near Chicago, said all hospitals in the county are reusing protective gear "in ways that were not originally intended and are probably less safe than the optimal use of PPE."

The DuPage County department is a supplier of last resort that steps in when facilities have less than two weeks' worth of gear. As of Monday, it had only nine days of some supplies at the current request level. A rise in new infections could make the supply go much faster.

The American Medical Association wrote to the Federal Emergency Management Agency, Vice President Mike Pence and members of Congress calling for a coordinated national strategy to buy and allocate gear.

Rep. Carolyn Maloney, a New York Democrat, released a memo last week ahead of a congressional committee hearing that raised concerns about looming problems in the supply chain. Her report was based on interviews with unnamed employees at medical supply companies, one of whom warned that raw material for gowns is not available at any price in the amounts needed, leading to an "unsustainable" situation.

Rear Adm. John Polowczyk, who is in charge of coronavirus-related supplies for the White House, told Congress last week that more than than one-fourth of the states have less than a 30-day supply.

"It would seem like in less than 30 days, we're going to have a real crisis," said Rep. Bill Foster, an Illinois Democrat.

FEMA, one of the main federal agencies in charge of the coronavirus response, would not break down which states have enough gear to last beyond 30 days and which do not. It referred those questions to individual states. In June, the government started replenishing its once-depleted stockpile with the goal of building up a two-month supply.

As of June 10, FEMA had distributed or directed private companies to distribute more than 74 million N95 masks and 66 million pairs of gloves, along with other gear. The agency said it changed its distribution method to send more equipment to hot spots.

Although all U.S. states and territories have received some protective gear from FEMA, an Associated Press analysis of the agency's own data found that the amounts varied widely when measured by population and the number of confirmed COVID-19 cases.

The AP analysis found that low-population, mostly rural states received the largest FEMA allocations per confirmed case. As of mid-June, for example, Montana had received 1,125 items of protective gear per case, compared with 32 items per case in Massachusetts, an early hot spot. States including California, Iowa and Nebraska, all of which have seen a surge in confirmed infections, received among the lowest amounts of protective gear from FEMA per case, according to the AP analysis.

Many states say the federal supplies make up a small part of their stockpiles after they spent millions of dollars to acquire equipment on their own. FEMA told the AP that its initial distributions were made on a per-capita basis, but also said the agency has tried to accommodate individual requests from the states.

Concerns extend beyond the amount of gear. In New Hampshire, an association representing nursing homes said most items sent by FEMA in early June were unusable, including child-size gloves, surgical masks with ear loops that broke when stretched and isolation gowns with no arm openings.

The group had a 200% increase in requests during the last two weeks of June from medical providers in Texas, a state with a big surge in confirmed virus cases. State officials there have said their supplies are adequate.

“We anticipated that we would need to be around for a few weeks until someone else stepped in and solved this problem,” said Dr. Megan Ranney, an emergency physician at Rhode Island Hospital who was among the group’s founders. “Here we are, still getting hundreds of thousands of requests a week.”