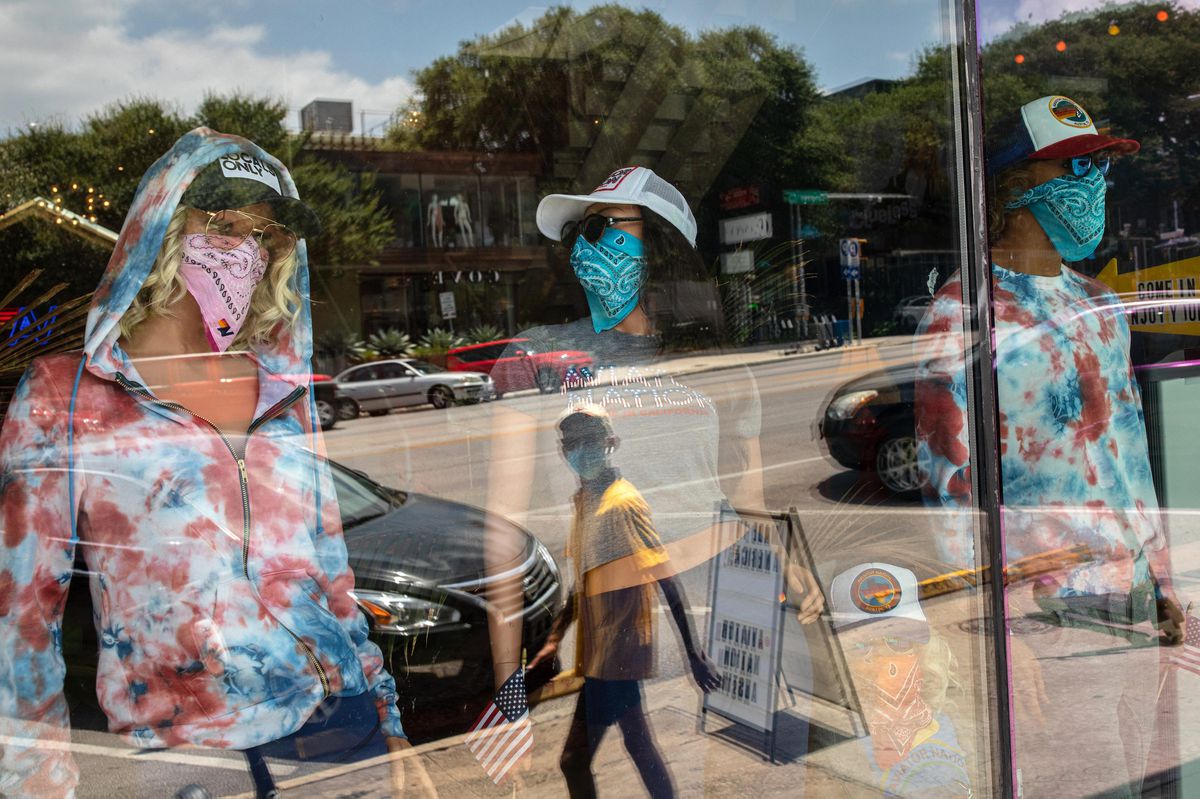 Mask-wearing mannequins at a store in Austin's South Congress neighborhood. Texas is among the states that have rolled back their reopenings amid a spike in coronavirus cases. Florida also reversed course on loosened restrictions after Gov. Ron DeSantis, a Republican, pushed for a quick recovery. (Photo by Tamir Kalifa for The Washington Post)

Mask-wearing mannequins at a store in Austin's South Congress neighborhood. Texas is among the states that have rolled back their reopenings amid a spike in coronavirus cases. Florida also reversed course on loosened restrictions after Gov. Ron DeSantis, a Republican, pushed for a quick recovery. (Photo by Tamir Kalifa for The Washington Post)

They raced to shut down their economies in March, and many opened them just as quickly in May.

Now, governors across the country are facing growing pressure from public health experts and local leaders to reimpose stay-at-home orders as the only way to regain control of coronavirus outbreaks that threaten to overwhelm hospitals and send the death count spiraling.

The push appeared to receive a boost from Anthony Fauci, the nation's top infectious-disease official, who suggested in comments released late Wednesday that struggling states "should seriously look at shutting down."

He took a more measured approach on Thursday, emphasizing that stay-at-home orders should remain a last resort and suggesting a pause in reopening plans instead.

So far, that has been the preferred method for governors seeking to arrest climbing caseloads while not alienating a virus-weary public. Yet, with scant evidence of progress in states across the Sun Belt - and beyond - experts are increasingly concluding that more drastic measures are necessary.

"Stay-at-home is a blunt instrument," said Farshad Fani Marvasti, director of public health at Arizona State University. "But when you're leading the world in new cases and things don't seem to be getting better, you may have to use that blunt instrument."

Studies have found that orders that closed nonessential businesses and forbid nonessential travel or gatherings prevented millions of coronavirus cases nationwide when they were imposed this spring. Researchers have also found such orders could have saved tens of thousands of lives had they been implemented earlier.

But with the economy reeling from a prolonged shutdown, and President Donald Trump agitating for a quick reopening, governors across the country lifted restrictions in May. That was despite the fact that most had not met the White House's own criteria for determining when it was safe to ease up.

Now, with caseloads hitting new peaks, the process for some states has been thrown in reverse.

Nationwide, more than a dozen states have paused their reopenings this summer as case numbers have climbed. Another half-dozen have rolled back previously announced reopenings. Several have reimposed bans on bars, which have been particularly hospitable spots for the virus to circulate.

Yet the majority of states have pressed ahead with reopenings.

As case numbers in the U.S. surge, that has unnerved public health experts who see a disaster in the making.

Fauci told the Wall Street Journal in a podcast released Wednesday that some states "went too fast" with their reopenings and suggested that the solution may be to go back to square one.

"I think any state that is having a serious problem, that state should seriously look at shutting down," he said in remarks that appeared to contradict Trump's push for the country's reopening to continue.

During an appearance Thursday, Fauci dialed back his remarks, saying that a "complete shutdown" would be "obviously an extreme."

"I would hope we don't have to resort to shutdown," he said at an event hosted by the Hill newspaper. "I think it would not be viewed very, very favorably, even by the states and the cities involved. So rather than think in terms of reverting back down to a complete shutdown, I would think we need to get the states pausing in their opening process."

But other public health specialists insist a pause is not enough, and that the U.S. won't be able to reopen to the extent that many other countries have until it learns how to do so safely.

"We see the hurricane coming. In some places, it's already here," said Thomas Tsai, a Harvard health policy researcher and surgeon. "The question is whether you're going to evacuate your citizens from the path."

The evidence so far, Tsai said, suggests not.

"We're watching this unfold and we're frozen," he said.

At the Harvard Global Health Institute, with which Tsai is affiliated, researchers recently put together a national tracker to assess the severity of the outbreak in all 50 states.

As of Thursday, 15 of them were in a state of "accelerated spread," meaning that stay-at-home orders should at least be considered, along with aggressive testing and tracing programs.

Another five - Arizona, Florida, Louisiana, South Carolina and Georgia - were flashing red. In those states, the outbreaks are so advanced that researchers say stay-at-home is no longer optional. It should be mandatory.

In all five, however, governors have waved off suggestions that people should be again told to stay at home, citing the economic costs of keeping people out of work.

In Arizona, cumulative deaths topped 2,000 on Thursday and daily hospitalizations hit another high. Gov. Doug Ducey, a Republican, has urged people to stay home when possible, and he has reinstated closures of bars, water parks, movie theaters and gyms.

But so far, that hasn't been sufficient. The case counts continue to rise in a way that public health experts say is reminiscent of the exponential growth that the world's worst-hit places experienced earlier this year, before stay-at-home orders kicked in.

"We don't want to become another New York, another Italy," said Marvasti. "But that's where we're headed. We need to learn our lesson from these places."

Steve Adler, the mayor of Austin, has come to the same conclusion. In Texas's capital city, cases have been surging and hospitals have been filling up.

This week, new coronavirus admissions surpassed an average of 70 per day - the low end of the trigger that health authorities had set for shutting down nonessential businesses, ending indoor restaurant dining and banning gatherings outside the home.

The situation, Adler said, is "precarious in terms of our ability to meet the intensive care surge that we could be facing."

A slowed growth rate has bought the city more time to consider whether a shutdown is truly necessary. But Adler said it remained an option he would need to consider.

"I have to do everything I can to protect the city," he said.

Authorities in Houston and Dallas have also asked for the authority to shut down, citing the pressure on hospitals and concern that there may not be enough medical staff to treat the sick.

Standing in their way, however, is Texas Gov. Greg Abbott, a Republican, who has maintained that he alone has the authority to issue stay-at-home orders. And he has been a steadfast opponent, despite record caseloads - more than 10,000 new cases of the virus were reported Tuesday.

"To shut things down completely back into lockdown mode, that would really force Texans into poverty," Abbott said this week.

A return to stay-at-home orders could have severe political consequences. Although surveys showed strong support for such measures in the spring, a second round would inevitably spawn a backlash.

Alabama is one of at least five states that hit a single-day high of new cases Thursday. Nationally, the seven-day average was 52,820, up more than 7,100 cases from the same time last week, according to data tracked by The Post.

Many governors, Abbott included, have argued that targeted measures will be more effective than a blanket shutdown.

In Missouri, which reopened rapidly in early May, case numbers have risen sharply since mid-June. At least some of that increase has stemmed from increased testing. But there have also been significant outbreaks, including at meat processing plants in the state's southwest - with cases extending into the broader community.

But state health director Randall Williams said that rather than focus on shutdowns, the state's attention has been on "boxing in" hot spots with aggressive testing and isolation for those infected. He said promotion of social distancing, hand washing and mask wearing would also help to stem the spread.

In southwest Missouri, a conservative area where resistance to masks has run high, many have cited the president's example in refusing to wear one. But attitudes may be shifting as the peril posed by covid-19 hits home: The city council in Joplin, the region's hub, rejected a mandatory mask ordinance last week, only to reverse course Wednesday night and approve one.

Michigan health director Robert Gordon said his office, too, was focused on changing behavior and getting the public to follow medical advice.

"Part of it is what are the rules on the books. Equally important is what are people doing, whatever those rules are," Gordon said.

Gov. Gretchen Whitmer, a Democrat, who authorized some of the strictest stay-at-home rules nationwide before lifting them in June, has signaled that she won't be afraid to reimpose restrictions. Last week, she halted the state's reopening, and ordered bars to again be shuttered for indoor service.

Gordon said the difficulty in bringing down case numbers will only increase, with schools seeking to reopen next month and the weather forcing more people indoors in the fall.

A return to stay-at-home, he said, was the last resort. But it wasn't unimaginable, either.

"Our job is to do absolutely everything in our power," he said, "so we don't have to go back to that."